George Michael’s 1987 solo debut album Faith was a bid for seriousness following his career as part of the boy band duo Wham! – and it worked. Six consecutive hit singles rewarded pop fans’ faith. But on a different level, it also restored faith.

Look at the album cover, the first of several memorable George Michael icons. The jewelry hanging from his left ear was code. Strategically measured above the fashionably-trimmed scruffy beard, it conveyed audacity and conscience, perfecting Madonna’s quasi-religious pop antics. Yet Michael’s male rebellion produced a shock all its own: Here was a rebel whose spiritual belief rushed him (perhaps guiltily) beyond the material girl’s commercial siren symbolism into sexual mystique.

From that point, Michael used the album to erect a series of carefully crafted pop statements that were also personal career manifestos. Track three, “Father Figure,” is the most impressive and the most enduring of Faith‘s many hit singles that made Michael a competing force during the high-pressure era of Michael and Janet Jackson blockbusters. Its blend of pop-gospel balladry and R&B sensuality made Michael a crossover artist of similar huge significance – attracting racially diverse listeners among Eighties radio and music video’s ever-expanding audience.

That earring symbolism and the pop eccentricity it entailed, chanced one of the deepest – queerest – dares of all the fops and bohemians pouring out of England, New York, Los Angeles and Minneapolis bohemias. These AIDS-era comrades were epitomised by the British pop duos from Pet Shop Boys, Erasure to the Communards whose partnerships depicted a vanguard gay solidarity. But by breaking out on his own, Michael was a rogue among renegades. But he was a romantic rogue, a recording industry megahustler with Motown in his heart. In “Father Figure,” he revealed his special knowledge of pop music as the language of seduction.

The track starts with confession: “That’s all I wanted/Something special, something sacred.” In the hard-nosed rap songs popular in the late 1980s, this was known as “booty-begging” music. (At that time, only 16-year-old L.L. Cool J dared to express romance in hip-hop.) But Michael, schooled in Stevie Wonder as well as Marvin Gaye, Luther Vandross and Bobby Womack understood what his peers Michael Jackson and Prince knew about winning over listeners, including those in the increasingly visible and demoralized gay subculture. In this context, “booty-begging” spoke subtly to gay male sexual appeal, even as R&B’s legions of female fans have long understood the parameters of interpersonal erotic entreaties. Certain spoken codes and impassioned gestures – straight as well as gay – are consistent with the language sung in “Father Figure.”

Michael’s gift was to make records as language, what Roland Barthes called “a lover’s discourse.” His “I Want Your Sex” was pure libido; “Father Figure” was impure sensitivity – explicit without being raunchy: “For just one moment/To be bold and naked/At your side.”

It’s forward – a verbalised pass – but the phrase “bold and naked” was also political. The cunning to express physical longing as a social imperative shows sophistication. In this song George Michael, the gay pop artist, created a worthy parallel to the ultra-sophistication of Pet Shop Boys and Muddy Waters. (His best Wham! songs, “Wake Me Up Before You Go-Go” and “Careless Whisper” were imagined in a lighter mode like that of the period’s other great gay pop duo Erasure.)

With this interpersonal communication, Michael articulates the spiritual desire that is rarely admitted within gay discourse. It shows an ability to translate hidden, or once-forbidden, passion into widely relatable terms. In Michael-the-suitor’s drama of need and longing, he beseeches the object of his affection, auguring the crucial discussions, the self-examination and negotiations, that inhabitants of gay subculture had to hold among themselves (conversations that, of necessity, preceded the eventual popular understanding of the marriage equality topic.)

“Father Figure” sets a human precedent more than it argues a social issue. What makes it an especially fine work of pop art is to be found when Michael’s chorus leaps to the song title’s great, almost taboo revelation:

Every time I hear this quite stunning refrain, I realize the only thing preventing it from becoming the new traditional wedding song of the millennium is its sex-pirate vision of love and fidelity. It’s too knowing for virginal wedding night nuptials. Michael wrote lyrics that insinuate the complicity of intimates. The father-figure image alludes to the frankly sexual consent of role-playing partners as enjoyed between themselves. Each verse progresses in confidentiality, tenderness, affection. It may seem to go against the rules of equality as set out by political correctness but perhaps only adult experience can teach a listener to respect the sense of sexual and emotional play that Michael vouchsafes – especially in his call-and-response catchphrase “I’ll be your daddy.”

“Father Figure” is not incestuous, nor is it a pro-patriarchy song, but it certainly isn’t against the thrilling dynamic of power relations that exist “When 2 R in love” (to quote Prince’s coital euphemism).

Neither is the song about inappropriate age relations. Rather, Michael’s “Put your tiny hand in mine” rings like a Sadean nursery rhyme. It absolutely defies Wham!-era bubble-gum “innocence” which makes it a pop song for adults. Its most popular line is one that is die-hard romantics often mishear as “I have had enough of crying.” Of course a song as great as this thrives on ambiguity, but Michael’s impetus behind Faith was to transcend facile romanticism, which explains the true lyric “I have had enough of crime.” As a mature gay man sensitive to the passion of AIDS activism and ACT-UP’s creed to unleash power against homophobic restrictions, he was aware of his obligation to account for romance, even gay boundering, somewhat politically. Though it’s just one line, the anthemic cry surpasses the pent-up anger of Bronski Beat’s blatant pro-gay protest song “Smalltown Boy.” 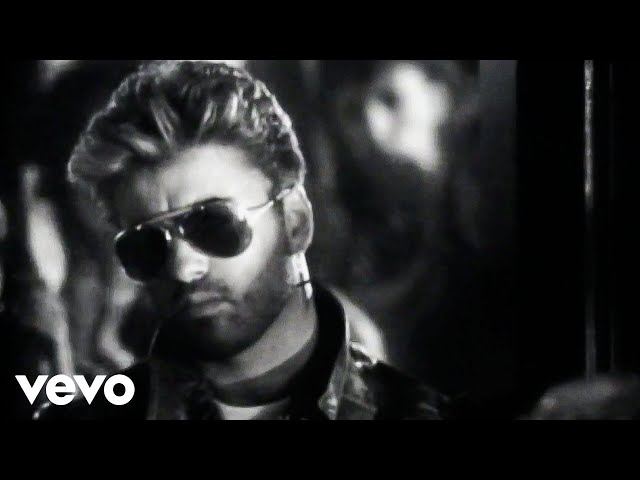 Because Michael was indeed a romantic pop star, he sold “Father Figure” through a music video that employed general-audience appeal by emulating a Hollywood melodrama. Going from color to black-and-white, Michael, co-directing with Andy Morahan, evoked Scorsese’s Taxi Driver, starring himself in lurid color as a lonely, lovesick cabbie out on the street cruising – pursuing an aloof supermodel (real-life supermodel Tania Coleridge doing cinema verite). Shifting to black-and-white stylisation, Michael and Morahan then copied Woody Allen’s Manhattan as the fantasy romance intensified. Indulging these heterosexual prototypes before Michael came out to the media is no different from the command of popular language evident in his songwriting. The video’s hetero stunt was intended to appease timid MTV-ers not ready for same-sex action, yet it confirmed the universality of “Father Figure” and its insider’s romantic knowledge.

This video’s commercial logic (note Coleridge’s broad-shouldered androgynous strut during the video’s runway scene) showed Michael’s concern with fighting the norms of pop music image-marketing. It anticipated the tactic he chose for his follow-up album Listen Without Prejudice Vol. 1 and the magnificent dance track “Freedom ’90.” That song’s still-striking David Fincher-directed music video was part of Michael’s misguided “ascetic aesthetic” decision to no longer “shake his ass” on camera and stay off screen. A host of female supermodels – Naomi Campbell, Linda Evangelista, Cindy Crawford, Tatjana Patitz, Christy Turlington – made worthy stand-ins for the eyelash-fluttering gay icon. Like the “Father Figure” music video, it was Drag in Reverse – which might have been a better title than Listen Without Prejudice to describe the goal of Michael’s pop seduction.

The personal rebellion that was exposed in the latter, unsettled years of Michael’s public life can be felt in every aspect of “Father Figure” where the gospel melody veiled a blues music essence – what was secretly his bawdy gay desire and travail. Dig that cross hanging from his ear. With his best song and performance, George Michael transformed pop music language and found personal faith, private realism, in a romantic ideal.