It’s very easy to dismiss U2’s Joshua Tree Tour 2017 as a cash grab by a band that’s more comfortable these days looking into the past than into the future, especially considering the blowback that greeted their 2014 LP Songs of Innocence, a public-relations fiasco of such devastating proportions that Saturday Night Live‘s Weekend Update is still mocking it three years after the fact. It would also be easy to think the move means that they have officially joined the ranks of the Rolling Stones and the Who, giants of rock that long ago contented themselves with playing their old hits at stadium shows that create tremendous amounts of excitement, nostalgia and money, but little forward motion.

But U2 have spent their entire career proving doubters wrong, fiercely resisting the easy lure of nostalgia and rising above any move that hints at cynicism. Time and time again throughout the new tour’s U.S. opener at Seattle’s CenturyLink Field (the band’s North American run officially began in Vancouver two nights earlier), U2 proved how a 30-year-old album can speak to the issues of today – whether they be immigration, U.S. foreign policy or the dwindling power of labor unions – while reminding the audience that they are a live act simply without peer. The band has always done their best work under trying circumstances, and in the words of Bono back around the time they came back with “Beautiful Day,” it really felt like they were reapplying for the job of the best band in the world by showing how they earned the title in the first place.

The show began with Larry Mullen Jr. casually walking onto the B stage (which is shaped like a tree) and kicking into the thunderous intro of “Sunday Bloody Sunday.” He was totally by himself, mirroring (intentionally or not) how he founded the band back in 1976. One by one, the others joined in, though they stayed on the tiny satellite stage and left the enormous screen on the main stage dark. It stayed that way for the entire pre–Joshua Tree portion of the evening, a bold move when you’re playing to about 60,000 people, most of whom can barely see you, but it worked.

“Sunday Bloody Sunday” led right into “New Year’s Day,” also from 1983’s War. They’ve done this song more than 700 times, but this was the first time Bono has ever sang “And so we’re told this is the golden age/And gold is the reason for the wars we age” from the final verse. It was the first sign that this show was about presenting the songs as they appeared on the albums, minus the extended codas, false endings, snippets of cover songs and mini-speeches that have seeped in over the decades. It was also the first indication that the show (at least until the encores) was going to present their music in strict chronological order.

After the two War songs, they moved on to 1984’s The Unforgettable Fire. A moving “A Sort of Homecoming” (unplayed in America since 1987, discounting a single spontaneous acoustic attempt in 2001) followed, leading right into an intense “Bad” (replacing “MLK” from opening night in Vancouver) and then “Pride (In the Name of Love).” The latter is the tune that took U2 from college radio and clubs and theatres onto Top 40 radio, MTV and arena stages. It positioned them perfectly for the critical and creative breakthrough that came two years later with The Joshua Tree. 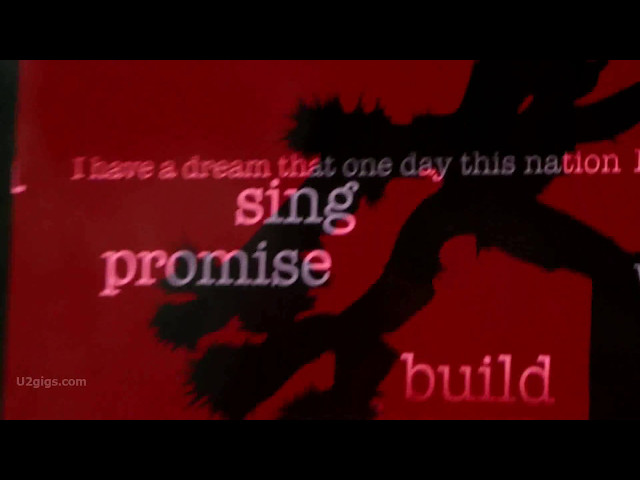 While the crowd was still singing the refrain of “Pride (In the Name of Love)” the band moved onto the main stage as the swelling synth intro to “Where the Streets Have No Name” filled the stadium and the screens came alive with the color of a bright orange sunset and the band silhouetted in front of it. This was the exact original opening to the Joshua Tree tour in 1987 and it lost none of its power in the past 30 years. The moment kicked the crowd into a whole other gear of euphoria. The sunset effect transitioned into a new film by longtime U2 photographer Anton Corbijn of a car slowly moving down a deserted desert highway, a street with no name. Nearly every song on the album would be paired with a mini-film, most taking place in the arid desert that gave the album its inspiration. The clarity and brightness of the tour’s 8K mega video screen is unlike anything that’s ever been seen at a rock concert, making even their past ones seem chintzy by comparison.

The Joshua Tree is top heavy with the hits, so “Streets” was followed by singalong renditions of “I Still Haven’t Found What I’m Looking” and “With or Without You.” These are also mainstays of U2 concerts, but hearing them in the context of the broader album made them feel fresh again. “Bullet the Blue Sky” – a furious denunciation of Reagan’s foreign policy in South America – featured a film in which citizens of Latin America, old and young, put on army helmets while standing in front of a painted American flag, essentially bracing for the brutal impact of decisions made thousands of miles away from them with little regard for their lives. On past tours Bono has delivered a “Bullet Rap” that spoke to the politics of the moment, but tonight he let the original lyric speak for itself. Near the end, Bono shined a handheld spotlight on the Edge, just like the iconic image on the cover of Rattle and Hum.

The next seven songs – “Running to Stand Still,” “Red Hill Mining Town,” “In God’s Country,” “Trip Through Your Wires,” “Exit” and “Mothers of the Disappeared” – weren’t hit singles, and a decent chunk of the audience probably didn’t know them very well. That’s a tremendous challenge for a stadium show, but the Corbijn movies coupled with the group’s passion meant that most everyone stayed engaged and on their feet. “Red Hill Mining Town” had never been played live until this tour and this was a slower version with the Edge on piano and a video of the Salvation Army Brass Band. Any fears that Bono could no longer hit the high notes on the song were clearly misplaced. He turned 57 this week, but his voice is in stunning shape.

The most exciting song from the second side of the album was “Exit.” The haunting tune hadn’t been touched in concert since the psychopath that murdered actress Rebecca Schaeffer in 1989 claimed the song influenced his actions. In Rattle and Hum Bono said that U2 were stealing “Helter Skelter” back from Charles Manson, and this ferocious rendition of “Exit” seemed to finally steal it back from the clutches of another deranged murderer. It was about time. The Joshua Tree portion of the show wrapped up with “Mothers of the Disappeared,” complete with a video of women holding candles in honour of the young Chilean men murdered by Augusto Pinochet. Eddie Vedder came out to deliver the final verse, joined by opening act Mumford & Sons.

That song is a sad way to end a set, so the encore kicked off with upbeat renditions of “Beautiful Day” and “Elevation” that got the crowd back on their feet. It was followed by the Achtung Baby deep cut “Ultraviolet (Light My Way),” which has been reimagined as a feminist anthem, paired here with a video honouring everyone from Sojourner Truth, Rosa Parks and Angela Davis to Ellen DeGeneres and Lena Dunham. (Any Republicans in the audience must have spontaneously combusted when that last one came on the screen.) A speech about AIDS relief in Africa, “One” and “Miss Sarajevo” (with piped in vocals by the late Luciano Pavarotti) followed.

For what appeared to the grand finale, the group returned to the B stage, stood in a circle and played the anthemic brand-new song “The Little Things That Give You Away,” which is slated to appear on their upcoming album Songs of Experience. “Sometimes I can’t believe my existence,” Bono sang. “See myself on a distance I can’t get back inside.” That song ended the night in Vancouver, but in Seattle the group wasn’t ready to leave. “One more for the people who traveled all the way here,” said Bono. “Let’s get back to where we started.” With that they launched into “I Will Follow” and once again had the stadium bouncing up and down.

Unless the band adds on another leg, the Joshua Tree Tour 2017 will wrap up in just two and a half months. That’s short by U2 standards, but it’s understandable that they don’t want to spend too much time revisiting their past. And judging by the sublime beauty of “The Little Things That Give You Away” they have plenty of exciting things to come in the future. They just need this tour to remind the world of the incredible journey that got them here.