As Jaymz Clements noted in his recent review of If This Is All We’re Going To Be, the third LP from Luca Brasi is propelled by the “cathartic, euphoric let-loose moments that serve as paeans to mid-20s malaise”. However, amongst these outwardly-facing outbursts there remains the loud, beating heart of what has always been a signature element of the Tassie punk’s sound: a reflective introspective quality.

We recently caught up with Luca Brasi vocalist/bassist Tyler Richardson to discuss what went into what is arguably not only their most consistent, but also most personal, collection of songs yet.

If This Is All We’re Going To Be is out now via Poison City. All words below by Tyler Richardson. 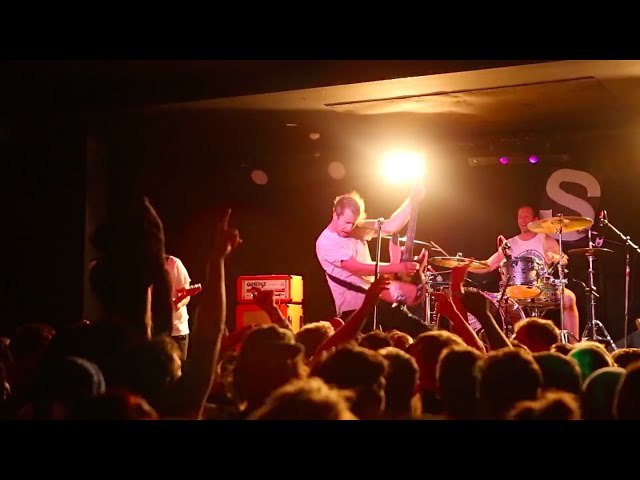 “Aeroplane” was the first track we finished as a demo for this record, and the first hint of the direction we were headed for on the record. The idea going into this record was to try and nail down the guitar side of the band, which is super important to us, and the melody aspect. I actually had this ridiculous idea that I could write a concept record on the book “Catch 22” and a bunch of the themes in it are from that. When I figured out how bad an idea this was and how insane it was going to send me, I decided to put a more personal spin.

I’ve gotta remind myself so often that what I have is awesome, and what you have, you’ve got to appreciate, and how important it is to do that. I find it hard to stop continually dissecting everything in my life, to slow that thought process down. I’m so damn lucky with what I’ve got and this is my reminder. I love the bridge and the pause back into the last chorus, a real fun one to play live.

This one is a bit of an ode to the good times and chasing that goddamn free feeling. I know so many people who are in the same age bracket who are starting to feel old. I don’t so much feel old but dragging myself out of bed to get back into the party is definitely getting steadily harder. Getting full of that “late night toxic” or just feeling alive is what this one is about. There’s a line in a Cold War Kids song about mixing a gin and sinking into oblivion, I love that notion and that was a bit of an influence when writing this one.

This is something a bit darker sounding for us, definitely a bit of a departure from anything else we’ve done before. This is the first one we’ve ever written basically at band practice, from the idea stage to jamming it out. Minimal stuff was done at home, bar the lyrics, for this one. It’s awesome to have this full collaborative song and I really like this one. Jimmy (Balderston) our producer dialled in a rad bass tone and I’ve been chasing it ever since.

This one is the best combo of the [guitarist] Tom [Busby]’s guitar intricacies and melody that we’ve put together in my opinion. I definitely feel as though the first record was just us being 4 kids who’d never written songs just doing what we did. By a Thread was our first attempt at having a coherent direction and attempting to meld something raw, something melodic and something with Tom’s pretty style guitars. I definitely feel as though those experiments led to this song. This one is exploring living in the moment and loving life, but dealing with everything in between. I lived on Cascade road when I wrote the lyrics, about a kilometre from the Cascade Brewery. They make a beer called Cascade Lager with a blue label and the title is a bit of a nod to that.

“Drop Out” is about kicking off the city or anywhere you are and getting some sort of chance to “drop out” of every responsibility you have. This is a tribute to touring, something that has been a big part of our band and what we love. That first feeling of just getting in the van and the endless possibility is still bloody exciting.

This is another example of self-exploration, I always seem to come back to attempting to dissect or figure out where I’m meant to be, or even more prevalent; who. I find this becomes a pretty heavy theme lyrically in a lot of our stuff, this idea that we’re often expected to be a lot of different things at this age. I was speaking to someone about what they liked about the lyrical themes of our band, and of bands like our mates The Smith Street Band. They likened it to the bands I loved as a teenager (early 90’s Epitaph and Fat Wreck bands) and said that the often introspective themes in those bands that appealed to them then, is what they like about our bands now they are a bit older. I loved this idea, that this heavy self-reflection that is going on with a bunch of people, is part of what appeals to people in these songs. I especially liked this one because the most lovely man in the world, Tom Lanyon, of the best band ever Ceres, takes some guest vocal duties and kills it.

“Man, This is Living”

“Man, This is Living” is me attempting to put into words how good this all feels. It feels like we’ve been working at this thing for a long time, but I’m still so stoked we’re lucky enough to be a part of it. We have met so many amazing people, have been to some ridiculously awesome places and its all thanks to being in a band with my friends. Forever stoked, forever grateful.

This was a bit of a slow burner for us, generally we get down to the point pretty quick in songs, but this one takes its time to crescendo. But that’s something we really like about the track, build that tension and give it hell when the hook hits. The song centres around giving yourself a kick in the arse to do better in life and for those you love. A not so gentle reminder that you gotta give everything you can. This is another super fun one to play live, we’ve been playing it live for a few months now and when it kicks into the second verse it’s got a super fun energy.

As soon as Tom brought the music to this one to us it was just so obviously a “closer” type of thing. Again it’s a pretty different track for us, we really wanted to do a real slow burner, and jam the absolute shit out of the outro. We removed and added bars a few times at the end of this one, toying with how long we could get away with repeating it. I love the kick when the guitar comes back in towards the outro, an early mix of it came back with it super loud and I loved it. It’s not quite so loud now, probably for the best. Legendary, talented and inspiring legend Georgia Maq came down to Hobart to drop vocals on this thing and nailed it to the wall. The first take she did was album worthy, she bloody rules! (Go listen to Camp Cope). This one is about giving this thing everything we have, we are sure it’s the best reflection of us so far. We are so stoked to have this record out and play it for everyone.