A little more than 4,600 days have passed since Tool released their most recent album, 2006’s prog-metal odyssey 10,000 Days. It’s a fact that the band is highly aware of, as they’ve labored on a follow-up and humbly answered questions about the would-be record’s progress during the past 12 years. Now it seems they’re closer than ever to completing the album, with drummer Danny Carey saying emphatically that they’ll “definitely” put out an LP this year. Here, we’ve combed through interviews with Carey, frontman Maynard James Keenan, guitarist Adam Jones and Justin Chancellor that go back more than a decade to trace the rocky history of what will be Tool’s fifth album (when it finally comes out).

2008: Keenan says the band is working on a new album “right away.”
Almost as soon as 10,000 Days came out, Tool began sending mixed messages about their future. In a 2006 interview with Spin, Maynard Keenan said, “I can see [the end of the band] happening sooner rather than later,” but 12 years later that’s still not the case. Instead, he worked on his side project Puscifer, putting out V Is for Vagina in 2007, and telling Spin again that Tool understand that he has other commitments, including his Merkin Vineyards. Nevertheless, by 2008, he was saying that Tool were getting back to writing. “We’re going to start writing the new Tool record right away,” he told MTV at the time. He also explained the group’s creative process. “We all get in a room, shut out all the extra noises from the other people and what goes on outside the room and just focus on the four of us, where we are that day,” he said. “And then we just start making sounds.”

2010: The band reports it’s working on instrumentals.
Nevertheless, the only recordings by Tool’s members came out on other people’s records. Keenan sang on Jubilee’s “I Don’t Have an Excuse, I Just Need Help” and the Human Experimente’s cover of “21st Century Schizoid Man,” while Jones appeared on Isis’ Wavering Radiant LP, Chancellor played bass on Intronaut’s “Valley of Smoke” and Carey guested on ex-Tool bassist Paul D’Amour’s Feersum Ennjin project. In 2010, Tool’s website (via Metal Sucks) reported that Tool’s instrumentalists were working on new music while Keenan recorded with Puscifer.

2012: The group says it’s almost “more than halfway done” with the record.
The band played a handful of shows in 2010 and 2011, and in 2012, the group’s website reported that progress was still underway on a follow-up to 10,000 Days. “While riding with Danny to Chili John’s yesterday, I heard a lot of new Tool music (sans Maynard),” the group’s webmaster reported (via Metal Insider). “Dare I say that it sounded like … Tool (some of it reminiscent to earlier Tool stuff, with other parts pushing the envelope), and I assume that it will sound even more like Tool once the vocal melodies, etc. have been added.” The entry ended with speculation that the group was “more than halfway” done with the record.

2013: Scooter accidents derail the album.
Progress hit a brick wall in 2013 when two Tool members sustained injuries in two different collisions. “The New Year started off on a bad note as far as writing and arranging sessions for Tool’s next record,” the band’s website reported (via Fuse). “Because of the physical nature of the musical involvement involved, 9 days of jamming were lost.” They reportedly resumed writing on January 21st, though Carey said in 2013 that he was still in a lot of pain after breaking several ribs in his crash. “[The new Tool album will be out] sometime this year,” he said at the time. “That’s all I can say. The sooner the better for us. We’re really excited about it, so I hope the fans will be too.” Nevertheless, Keenan, who issued Puscifer’s Donkey Punch the Night in 2013, told a radio station, “No new disc, not this year” shortly Carey’s comment. “Basically right now it’s a lot of ideas,” he told Spin of the progress for both Tool and A Perfect Circle’s albums. “There’s no actual songs for either project. It’s still kind of noodles in a big basket. Lots of noodles, just no dishes.”

2014: Jones and Carey say lawsuit stymied album progress.
Throughout much of 2013, the band members gave elliptical answers about their progress in the studio. Carey, who put out an album with Volto! that year, contended, “It’ll be early 2014” when a new album will come out, while Jones said it takes “a little longer” because “we’re just different people [than when we started].” In August, Keenan told Rolling Stone “I can’t write until I hear the sounds … and I haven’t heard the sounds.” In 2014, he said, “I like to release records and write things a little more quickly than [my Tool bandmates] like to write; their process is very analytical.” But it was in an in-depth 2014 interview with Rolling Stone U.S. that Jones and Carey explained the holdup. Although they figured they had enough raw musical ideas to fill an album, and one close-to-complete track, they felt too constrained by their business dealings to be creative. When one of Jones’ friends sued Tool over some artwork, the band’s insurance company sued the band over technicalities with the case leading the band to file a countersuit against the insurer. It was time consuming, but the band was still able to finish a 10-minute track. By March 2015, Jones reported that the legal obstacles were now gone.

2015: Keenan reports that the album is progressing “slowly.”
With the soul-crushing lawsuit out of the way, things seemed to be rolling in 2015. In a Facebook update, Keenan – who put out Puscifer’s Money Shot that year – said that he would be able to begin writing “melodies and content ‘soon.'” By his estimation, “Things are progressing nicely. Slowly, but definitely progressing. Nothing is recorded yet, but the guys are confident that the pieces are coming together swimmingly.” He added, “I’m as anxious to get this album completed as everyone else, but as history will show, you can’t rush these gents. Patience is gold in this sound mine.” Nevertheless by the end of 2015, Keenan was back to giving indirect answers to questions about progress on the record. When Rolling Stone asked if he’d been working on it in October, he replied, “Do I seem like a lazy person to you?” 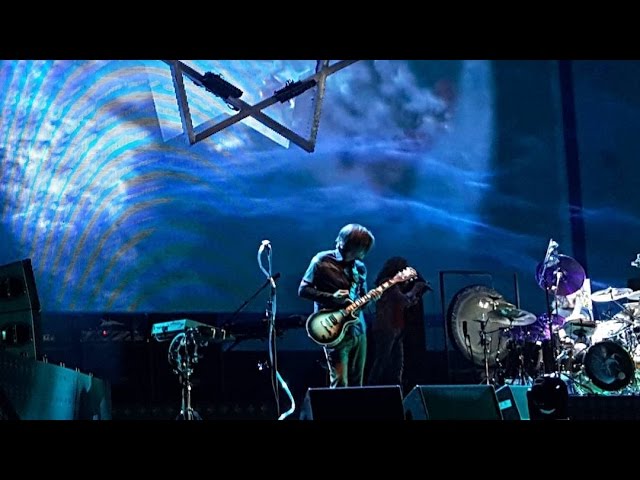 2015: The band begins playing new song “Descending” live.
The band debuted a snippet of a new song, with a working title of “Descending,” on their 2015 tour that Jones likened to a preview of a larger song. “We have a song that’s probably about 13 or 14 minutes long, so … it’s a shortened, different approach to it,” he told Rolling Stone U.S.. “It is a new song. It’s like a vague movie trailer to the real movie.” In the same interview, he said that progress on the album was “wonderful” and that everything was flowing and that Keenan had the music at that point. “I’m just blown away at the stuff that’s coming together,” he said. “I’m excited and can’t wait for it to be done.” But he also added that “done” is a relative term: “My philosophy has always been, ‘It’s not good when it’s done, it’s done when it’s good.'”

2016: The group reports there are still shorter songs that need completing.
Tool’s website reported that the band was still figuring out some of the songs. “At this stage of the writing/arranging process … there are only a couple of ‘shorter’ songs left to complete (?), along with a segue or two or three,” the band’s webmaster reported (via Metal Sucks). “Of course, we need to keep in mind any changes that might be needed to accommodate the vocals, etc., once all of the arrangements are finished.”

2016: Chancellor reports that the band is “deep” into writing.
In an interview with Bass Player, Chancellor reported that the group was still “deep into the writing process.” He said that the group had narrowed things down to groups of ideas. “For the past few months we’ve been working on one of the newer songs fairly exclusively,” he said. “We get the gist of it and find the main themes that make up the skeleton between verses and choruses. Then we explore different ways we can depart from that and come back to it and flip it upside down, and take the time to see what else is there. Everyone knows we take our time. We’re really trying to be responsible with ourselves in trying to discover ideas that haven’t been discovered before. It’s kind of an alchemy, how we experiment.” The triumvirate of Chancellor, Jones and Carey were “playing pretty much nonstop” at the time.

2017: Carey says a new album will come in 2018.
In the middle of everything, Jones revealed on his Instagram that the band recorded “a new version of ‘Opiate,'” the title track of the band’s 1992 debut EP toward the end of 2017. “We wrote a different break down that’s about five minutes longer in the middle of the song,” he wrote. “I believe there are recent live versions of it online.” But by the end of the year, Carey – who recorded a new album with the supergroup Legend of the Seagullmen for a 2018 release – had a Tool album update. The record, he said, would assuredly come out in 2018. “I’m saying definitely,” he told Loudwire. “We’ll probably have it done in the first half [of the year] if things go as planned.” Then in 2018, he told Kerrang! the record was still “a work in progress.” “The cool thing is every time I think I’ve simplified it as much as I can, we’ll give it to Maynard and he’ll do something even more simplified – to the point where practically anyone can sing it,” the drummer said. “It’s simple shit and it’s coming out, man. The tracks are long … too long! Definitely too long for the radio.” In January, the drummer said he hoped the band would be hitting the studio “soon.” “[We] have a couple of gigs in May, so hopefully, we’ll have the album out before that,” he told Overdrive. “It’s wishful thinking at this point. I actually think I said that this time last year.” (Rage Against the Machine guitarist Tom Morello, who reported on Instagram in December that he’d heard some of the band’s instrumentals, said the music was “epic, majestic, symphonic, brutal, beautiful, tribal, mysterious, deep, sexy and VERY Tool.”) In the meantime, Keenan found himself shooting down an asinine rumour that A Perfect Circle would be using their 2018 Coachella slot to debut new Tool. All he said when asked about the veracity of that rumour, according to Alternative Nation, was, “No.”