The first thing you need to know about Wil Wagner, the frontman for the punk-infused Melbourne outfit the Smith Street Band, is that he’s in a good place, and has been for much of the last year. The second thing is that before then he definitely wasn’t. “It was a hugely traumatic time for me,” notes Wagner, referring to a relationship that imploded in slow, slashing motion over many traumatic months. The third thing is it’s all documented on More Scared of You Than You Are of Me, the band’s blazing new album.

“The album basically tracks a relationship,” explains Wagner, waiting for his coffee outside a café in Footscray, his local patch in Melbourne’s inner-west. “The first song is about when I realised I was in love with a person, and the last song is about the first person I was with after that person. It’s definitely very specific and awkward for my friends who know both of us.”

“This album is really a piece of catharsis. Wil had quite a lot to get off his chest,” the quartet’s drummer, Chris Cowburn, later adds. “He’s feeling happy about life and the decisions we’ve made. To be brutally honest that wasn’t the case for Wil and Smith Street for the two years prior, so it’s good to see my friend doing great.”

Wagner’s barrel-chested frame suggests a willingness to embrace others and his enthusiasm is infectious. Thirty seconds after making your acquaintance he’ll be raving about Lil Yachty, one of his favourite rappers and a fellow act with Smith Street at July’s Splendour in the Grass music festival, or making a self-deprecating admission. On stage the 26-year-old and his bandmates – Cowburn, guitarist Lee Hartney, and bassist Michael Fitzgerald – evaporate the gap between band and audience.

Wagner’s music, like his life, is meant to be shared. He brings “100 per cent raw honesty” to any situation, stresses Cowburn, and that’s one of the reasons that the group, formed in 2010, has become a touchstone act for a growing number of fans. When the national tour for More Scared of You Than You Are of Me, the Smith Street Band’s fourth studio album, reaches Melbourne this month they’ll be playing two nights at the city’s 2,500 capacity Forum Theatre. Wagner’s so excited that he keeps detouring to walk past the ornate venue every time he goes to band rehearsal.

“We’re definitely more ambitious than we’ve ever been. I like over the top music emotionally and musically,” Wagner declares. “We are a DIY band, we grew up listening to punk music, but I want to make records that sound like Arcade Fire, that sound like they were made in million dollar studios, and I also want to make albums that feel like Fugazi records and feel super-impactful and raw and imperfect.” 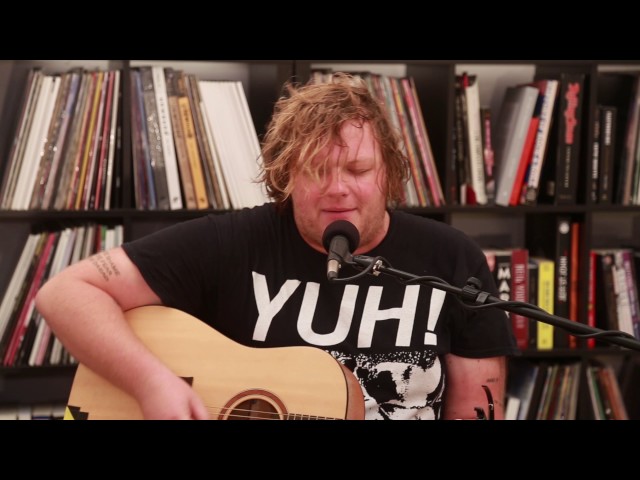 A constant, prolific songwriter, Wagner began writing the album at his Footscray home, sneaking out of bed in the early morning so as not to wake his girlfriend at the time and retreating upstairs to pour out his confusion and pain at their dysfunctional relationship. Both were songwriters and musicians, and it was the inequality in their lyrics about each other that first worried Wagner. He was writing love songs, but only hearing “mean, throwaway lines” in return.

“It was completely torturous, and this was someone who was aware of that and enjoyed it. It was super-strange, plus songwriting is such an obvious window into someone’s soul,” observes Wagner. “Anyone can be complimentary in a conversation, but lyrics and songwriting are such that if you write like me and my friends do, it can’t be bullshit. You can tell what’s fake straight away.”

That divide informs “Song for You”, a caterwauling, crashing out anthem – “I just wanted you to let me love you,” sings Wagner – that charts the terminal velocity of Wagner’s relationship. What followed that realisation, in real life and on the album, is a split that tore at the normally optimistic musician.

“I have bipolar, so I’m the very definition of a huge emotional range,” says Wagner. “It was a hugely traumatic time for me. I’ve had specific counselling stuff for it. I’ve had lots of relationships, but this was the Armageddon break-up. I’ve never had to write a concept album about a break-up, but this one fucked me up.”

None of this happened in private. Wagner was compulsively writing about his experiences, and also sharing them with his bandmates, all of whom he counts as the closest of friends. Whether out of dedication to the band, or a desire to keep him in motion, Wagner’s struggles coincided with extensive Smith Street Band touring in not only Australia, but also Europe and North America following the release of 2014’s Throw Me in the River album.

“I won’t pretend there hasn’t been dark moments and moments of tears and one of us wanting to pack it in and give it up, but we don’t let one another stop,” notes Cowburn. “We keep pushing each other and we keep going.”

“I can be trouble sometimes. I’m not a dick, but I can be mentally unstable, so I do need more things than most people in bands,” Wagner explains. “There were definitely times where I leant on those guys heavily. I’d come to them with a song and play it to them and they’d say to me, ‘Forget the song, are you OK?’ We all really care about each other and love each other. On tour, if I needed to, I could just turn my head and start talking to someone. We’re only ever a metre or two apart.”

“We are a DIY band, but I want to make records that sound like Arcade Fire,” says Wagner.

The band’s growing profile – the second half of 2017 will be spent touring overseas before a major Australian tour with a “very interesting format”, according to Cowburn, in early 2018 – plus a desire to find a new, motivating project has also led to the Smith Street Band starting their own label. More Scared… is the first release on Pool House Records, the latest step in self-sufficiency for a group that is self-managed and books its own tours and logistics.

“This felt like the right time and it’s a passion that the band has always had,” says Cowburn. “Being able to have complete control was important because we’re all micro-managers, but we also have the chance to start something and build a community for our friends’ bands and new groups we find. That’s super exciting for us.”

Fitzgerald is already producing the label’s first signing, Melbourne singer and songwriter Jess Locke, who also contributes to More Scared…, while Wagner hopes to sign and produce hip-hop acts and a chillwave duo. It’s one of the upsides of their success, while a downside is the heightened scrutiny they receive because Wagner is an enthusiastic public supporter of gender equality, LGBT rights and refugee advocacy.

“It sets you up for people who want to shut you down,” admits Wagner. “There’s this arrogant divide on the left where because I said those things people who agree nonetheless want to catch me out, rather than focusing on bands who’ve never said anything.”

What he’ll fall back on, as ever, is the support of his bandmates and the connection they enjoy in the Smith Street Band. Being in the group, says Wagner, is “hugely satisfying”, and now that he’s made it through the trying times he’s ready for whatever they discover next. The three lines recently tattooed on Wagner’s right arm, the design unadorned and the intent clear, are his new starting point: no more shame, no more fear, no more dread.