On the day in 2014 when Sum 41 frontman frontman Deryck Whibley came out of a three-day coma at Cedars-Sinai hospital in L.A., the first person he saw was his mother. “I knew something was really bad because she lives in Toronto,” he said. “Nothing really made sense, but I knew something bad had happened from drinking.” He didn’t how bad until he fully regained consciousness and his doctor explained how years of alcohol abuse had left him facing multiple organ failures. “He said to me, ‘You’re barely hanging on,'” says Whibley. “‘We’ll know in the next few days if you’re gonna make it.'”

Whibley had been a drinker since he was 17, but it didn’t become a problem for three years when Sum 41 hit the road in support of their debut album All Killer, No Filler. Their unique fusion of goofy Beastie Boys–style rhymes and Blink-182 pop punk had produced the breakthrough single “Fat Lip” that began climbing the charts once it appeared on the American Pie 2 soundtrack. Not yet 21, Whibley found himself on an endless debauched road trip with his best friends, often playing more than 100 shows a year. “I was like, ‘Well, I work so hard that I’m allowed to party as hard as I do because that’s my relief,'” he says. “It was normal to drink every night. We had to have some drinks to go on stage. How could you go onstage without a buzz?”

Sum 41 stayed on the alt-rock circuit. But Whibley’s life began taking a dark turn around 2009, when his marriage to pop star Avril Lavigne ended in divorce. Less than a year later, he was brutally attacked by a group of thugs at a bar in Japan. “Somebody recognised me and thought it would be fun to beat the shit out of me,” he says. “It took me off the road for months and I was in a wheelchair with the worst pain. I was like, ‘Well, I don’t want to become addicted to painkillers, but I do notice when I have a couple of drinks I feel a lot better.’ I had the pain of the divorce and the pain in my back, so I upped the amount that I drank. Eventually my whole body would shake if I went a few hours without drinking.”

The next three years were a blur of touring and hard-partying that ended on April 15th, 2013, when he collapsed in his kitchen and his fiancé, Ariana Cooper, rushed him to the hospital, where he was put into an induced coma. He awoke to unimaginable pain with his liver and kidneys barely functioning. He had internal bleeding and was vomiting up blood. Worse of all was the pain on his feet caused by severe nerve damage. “You couldn’t even touch my feet,” he says. “It felt like they were on fire. It was like walking on hot coals no matter where I stepped.”

Whibley in the hospital.

After a month of uncertainty and endless agony, Whibley’s body slowly began to heal and he was allowed to go home for short periods of time. But for the first year he was unable to stand on his feet for more than three seconds at a time. He tried to console himself with music, but he’d forgotten how to play guitar. “My whole brain felt like it reset,” he says. “Even speaking was difficult because my motor skills were so fucked up. When I picked up the guitar I knew where my fingers were supposed to go, but I couldn’t make them do it. It was almost like when I first learned how to play guitar at 13.”

Whibley’s mother stayed by his side throughout this whole ordeal, and Cooper, who had her own battles with alcohol before he went into the coma, quit drinking to nurse him back to health. Nowhere to be seen were the group of guys he thought of as his best friends. “It was sort of like an Entourage situation where I got success and brought my closest friends with me,” he says. “They stayed with me through my whole career. One of them was even a family member. As soon as I got into the hospital they split. Then I realized they’d been stealing from me for years. I was like, ‘Fuck you, man. I can do this without you.’ There was talk of a lawsuit, but I didn’t want to be tied up with these people for the next two or three years by suing them. I wanted to completely wash my hands of them.”

It took just a few months for Whibley to relearn the guitar. By early 2015, after not appearing on a stage for well over two years, he booked a low profile L.A. club show with some buddies. “I wasn’t sure if I could stand onstage for more than few minutes,” he says. “I had no idea if I was going to make it past three songs.” But the love of the crowd gave him the energy to finish the gig, and motivated him to get to work on the next Sum 41 album. From the very beginning he knew the record would tell the story of his recovery. “It takes the listener on the journey through the whole process,” he says.

13 Voices (out now) begins with a three-minute explosion of anger at his former entourage for abandoning him in his time of need. “You’re all dead to me!” he sings on “A Murder of Crows (You’re All Dead to Me”). “It was nice to know you all/Take a look because the writing’s on the wall/You disappeared but I survived.” From there it goes from the initial collapse (“Goddamn I’m Dead Again”) to the agony of recovery (“There Will Be Blood”) all the way through an epiphany on the last song, “Twisted By Design.” “That song is about the acceptance of myself,” he says. “I may be sober, but I’m as fucked up as I always have been.” 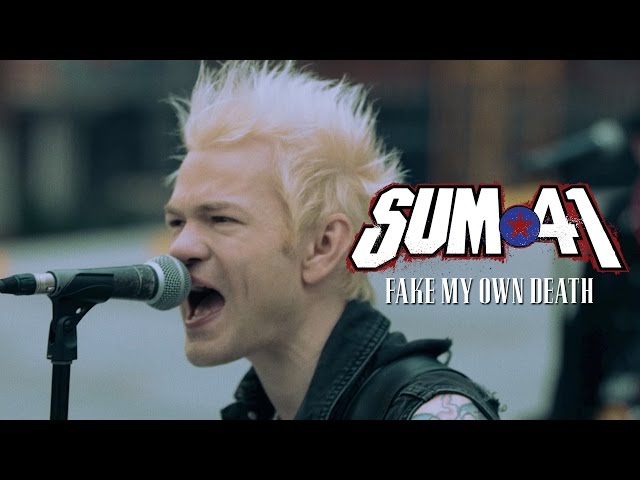 The new album also marks the return of lead guitarist Dave Baksh, who left the band in 2006. It’s also the band’s first record without original drummer Steve Jockz, who hasn’t played with Deryck since the coma. Whibley is thrilled that Dave is back, but isn’t eager to talk about Steve. “We don’t speak anymore,” he says. “I have nothing bad to say about him, but I never miss people who bail. It’s just something in me since people have been leaving me since before I was born, like my dad. If you’re not here, you don’t exist to me.”

Sum 41 have been touring steadily since the beginning of the year, and they have dates lined up through next February. “I used to worry that we wouldn’t be as good if I played sober,” says Whibley. “I also worried I’d be bored if I didn’t have a buzz, but I actually enjoy it more.” Despite everything that’s happened, Whibley said he has no regrets. “It was the best thing that ever happened to me,” he says. “I’m glad I went through something so difficult because it made me a better person. I like where my life is at right now, and it wouldn’t be this good without all that bad shit.”