R. Kelly was found guilty on all counts of racketeering, sexual exploitation of a child and kidnapping by a jury on Monday at his federal trial held in U.S. District court in Brooklyn. The singer faces a mandatory minimum and up to life in prison, according to a Department of Justice statement. Kelly’s sentencing hearing is set for May 4th, 2022.

The New York federal case against R. Kelly, whose full name is Robert Sylvester Kelly, included racketeering, transportation to engage in illegal sexual activity and coercion of a minor to engage in illegal sexual activity charges. The racketeering charge and violations of the Mann Act, which prohibits sexual trafficking across state lines, were particularly central to the prosecutors’ case to ensure the singer and his associates were held responsible for coordinating the sexual abuse of minors.

A jury deliberated for nine hours before returning a guilty verdict on all counts. With the racketeering charge, the prosecution worked to establish that Kelly was the leader of a criminal enterprise that preyed on women and underage girls for sex. It allowed the prosecution to introduce evidence from more than 30 years ago, with 11 accusers among the more than 40 witnesses testifying during the trial. For the first time, prosecutors could introduce criminal charges against Kelly in connection with Kelly’s marriage to the late Aaliyah, who was then 15 years old. (Kelly had denied all accusations against him.)

“Today’s guilty verdict forever brands R. Kelly as a predator,” U.S. attorney Jacquelyn Kasulis said at a press conference following the verdict. “To the victims in this case, your voices were heard and justice was finally served. No one deserves what they experienced at his hands. Or the threats and harassment they faced.”

“Today’s verdict brings an end to Robert Kelly’s decades-long reign of terror over many vulnerable girls, boys and young women,” added Peter Fitzhugh, Homeland Security Investigations special agent-in-charge. “With this verdict, it is my sincere hope that it will also begin the healing process for these brave survivors. Mr. Kelly once said, ‘I’m no angel, but I’m no monster either.’ I wholeheartedly disagree with that.
“For years, Mr. Kelly believed that his power and fame could defy the justice system and allow him to continue his abuse,” Fitzhugh said. “Today, a jury of Mr. Kelly’s peers confirmed what these courageous victims have known for far too long: Mr. Kelly is a prolific serial predator.” Fitzhugh noted that Kelly’s “brazen acts of intimidation” against accusers protected him from prosecution, reiterating claims that Kelly bribed and threatened victims and their families.

An attorney for Kelly did not immediately reply to a request for comment, but told CNN that they are considering filing an appeal on behalf of the singer.

The indictment involving Aaliyah accused Kelly of scheming with others and paying a bribe in exchange for obtaining “a fraudulent identification document” on August 30th, 1994. A day later, Kelly, who was then age 27, married the underage Aaliyah in a secret ceremony. The marriage was annulled months later because of her age. 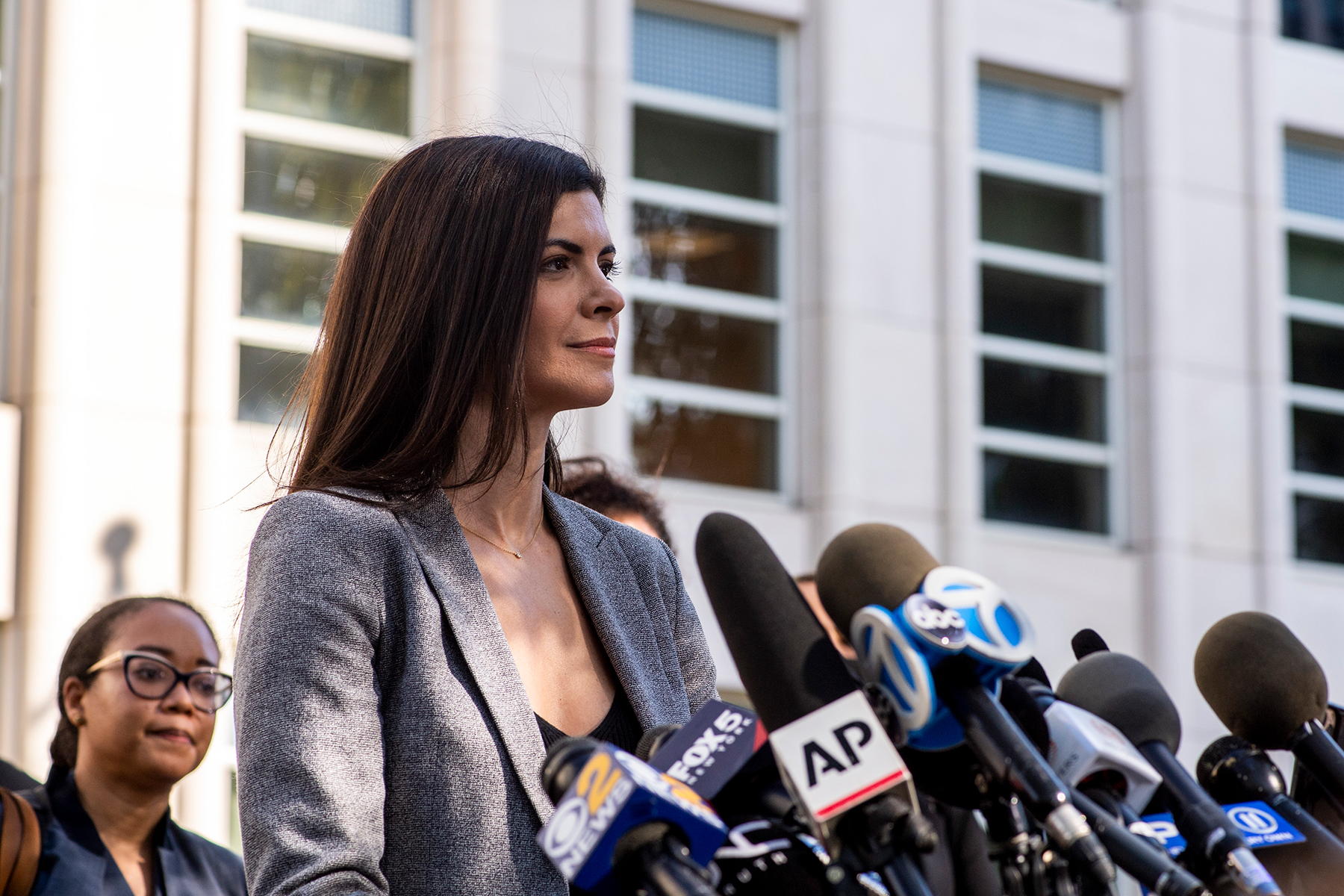 Jerhonda Pace was the prosecution’s opening witness, and is one of the six women and girls named in the indictment. Pace was 16 when she met Kelly at a party in 2009. During her testimony, Pace said that he insisted that she call him “Daddy” and that she needed Kelly’s permission to use the bathroom. She said things ended after he choked her until she passed out. Pace testified that Kelly knew she was 16 when they had intercourse because she claimed she showed him identification, but she alleged he told her to pretend she was 19 to others. “He told me he was going to train me to please him sexually,” Pace said. She also testified that he had given her herpes. Prosecutors added that DNA evidence from a shirt Pace had worn at the time matched Kelly’s.

A woman who was identified as Stephanie said she was 17 years old when she met Kelly in 1999 and soon after began having sex with the singer. She said it was the first time she had spoken publicly about their encounters until she took the stand, per The New York Times. Stephanie described her time with him as “the hardest time in my life.” “I’ve never been treated like that before or since,” she said. “He humiliated me, he degraded me, he scared me. I’ll never forget the way he treated me” and told the court that when Kelly had sex with her it was “humiliating” and he was “very specific” about positions,” which he would direct her to stay in, sometimes for hours.

Stephanie is one of the six women central to the indictment, three of whom testified they were underage when Kelly began having sex with them. A woman identified as “Zel,” in the first of two days of testimony, said she was 17 and an aspiring singer when she first met Kelly, whom she hoped would help her with her career. Instead, she said he physically abused her, and when she became pregnant, she told the court that he pressured her to have an abortion. “Zel,” known as Jane Doe Number Five in the indictment, had previously defended Kelly publicly, but later came forward accusing Kelly of sexual and physical abuse.

A woman identified as Faith, another of the six women from the indictment, said she was 19 years old when she met Kelly at a concert and they began a sexual relationship shortly after. She accused the singer of exposing her to herpes and not informing her that he had the disease.

Over the five weeks that prosecutors presented their case, accusers detailed their encounters with Kelly. A woman identified as Sonja testified that Kelly trapped her in his studio and raped her in 2003, while a man identified as Louis accused Kelly of abusing him when he was 17 years old in 2006. A second man who testified as Alex said Kelly groomed him for sex beginning at the age of 16, and they began having sex when he was age 20.

The employees’ accounts combined with the accusers’ testimonies were key to building the prosecutors’ racketeering case against Kelly. In total, the prosecution presented more than 40 witnesses as evidence of Kelly’s racketeering; “The law recognizes when someone commits a crime as part of a group, he’s more powerful — more dangerous,” Assistant U.S. Attorney Elizabeth Geddes said during closing arguments. “Without his inner circle, the defendant could not have carried out the crimes he carried out for as long as he did.”

Despite the benefit of a lengthy delay due to the Covid-19 pandemic, and perhaps because of the last-minute pre-trial change to Kelly’s legal team, the defense’s argument case lasted only three days and five witnesses. Kelly’s lawyers launched their defense by scrapping their list of likely witnesses, proposing three new ones, and then – when the third was not in town – interrogating only two. The witnesses, an aspiring artist named Dhanai Ramnanan aka Da-Ni and Larry Hood, a former bodyguard and member of the Chicago Police Department, both said they had known Kelly for more than a decade and had not seen the singer commit any of the abuses during that time. Ramnanan, who called Kelly a “mentor” and “friend,” claimed Kelly showcased “chivalry, basically” with his girlfriends over the course of the 15 years he knew Kelly.

Hood, who knew Kelly from grammar school but had worked with him for a shorter period of time, told the court that he had never witnessed Kelly commit any inappropriate behavior. Hood said that his job as a policeman would have compelled him to act if he had seen anything abusive take place.

Prosecutors poked holes in both men’s testimony: Ramnanan said he had been on the road with Kelly, but couldn’t recall what tours. He said he worked with Kelly in the studio, but the music was never released. Prosecutors asked him to point out where he was in three different photos of Kelly and women on a tour bus and asked if he was with Kelly every second in the studio. The aspiring artist allowed that “he had to go use the bathroom.” “I assume you slept,” the prosecution added.

The defense’s final witness, music exec Julius Darrington, testified that during his time working with Kelly – a tenure that began in 2016 – he never witnessed any wrongdoing. However, prosecutors countered that Darrington, a “friend” who Kelly helped break into the music industry, had never witnessed Kelly engaged in any sexual or illegal activity because he never spent time with the singer behind closed doors.

As his lawyers’ defense wound down their case after their fifth and final witness, Kelly told the judge that he would not take the stand to testify, avoiding what would have been an exacting cross-examination by federal prosecutors.