Post Malone says Ozzy Osbourne is “going to keep kicking ass,” calling his recent collaborator “so strong,” a week after the rocker revealed that he had been diagnosed with Parkinson’s disease.

Malone, who just hit the stage with Osbourne (and Travis Scott) at the American Music Awards in late November, says he “had no idea” the 71-year-old’s condition was that serious. “Working with him and hanging out with him and being around him, you can’t tell,” Malone explains by phone. “You can tell he has a little difficulty getting around, but he’s so strong.”

Malone worked with Osbourne on the song “Take What You Want” off the former’s Hollywood Bleeding album, and the singer says he hopes there’s more music in store for his longtime hero. “I know he’s been working on a new project with a bunch of my friends, [and] I’m really excited for him because he’s so passionate about it and it sounds incredible; he sounds incredible,” Malone says.

No stranger to unexpected collaborations, Malone sent his well-wishes to Osbourne while chatting up his new Doritos campaign, which debuted with a commercial that aired during Sunday night’s Grammys. The singer, who skipped the awards show despite having a handful of nominations, teamed up with Doritos to reveal a new chip flavor, dubbed “Flamin’ Hot Limón.”

The accompanying press release says the new flavor was inspired by Malone’s alter ego, Post Limón, though the singer says it’s much simpler than that: “I’ve been eating Doritos since I could walk, so it’s really cool to be part of this new deal.”

Malone has a busy 2020 ahead of him. Here are four other things we learned from our conversation with Posty.

1. Post likes it hot
“I like spicy things,” Malone admits, when asked about the new chip flavor (he dutifully adds that Doritos are almost always on his tour rider). It isn’t just chips though: “I like spicy drinks too,” he reveals. Case in point: The singer says he likes to start every morning with a lemon and ginger shot. “If I wake up and I feel a little groggy, it slaps you right in the face.” 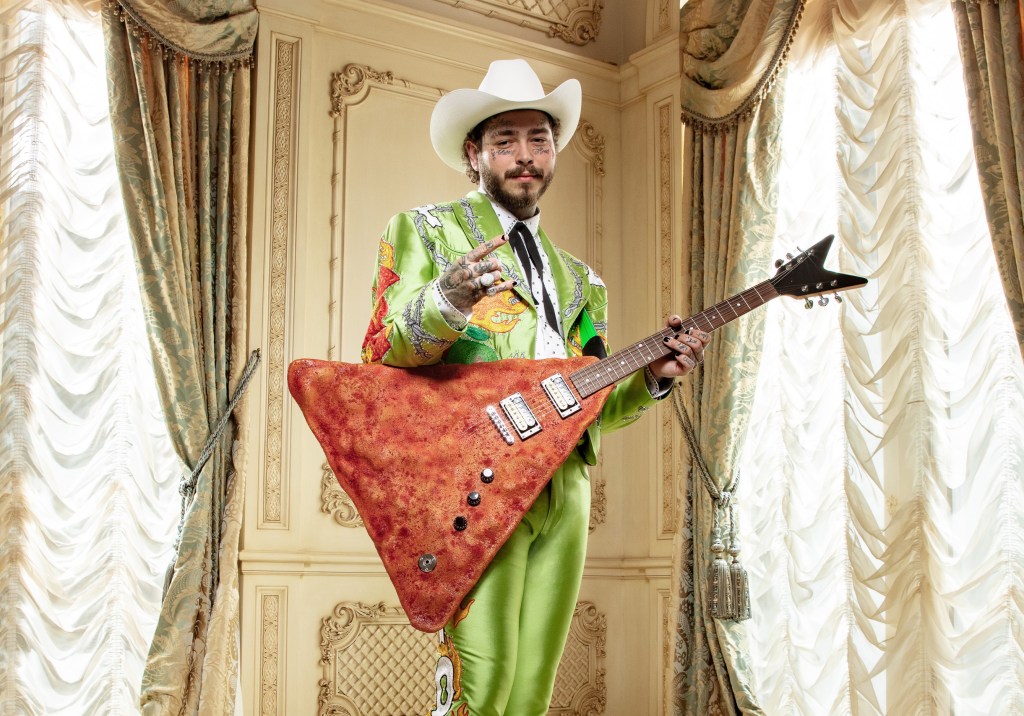 2. He skipped the Grammys for some R&R (and to stay out of trouble)
Though he was up for two Grammy awards — both for “Sunflower,” off the Spider-Man: Into the Spider-Verse soundtrack and Hollywood’s Bleeding — Malone decided to stay home in Salt Lake City to relax. “I’m taking it nice and easy,” he explains, about why he skipped the ceremony. “I needed a little break because I’ve been partying a little hard, so it feels good to be back home and playing Call of Duty. I’m going to take some R&R and get some beauty sleep so my body and voice doesn’t suck on tour. If I go to L.A.,” he explains, “I’ll get into trouble.”

3. Malone sang “Good Vibrations” with Mark Wahlberg on the set of their new film
The trailer for Post Malone and Mark Wahlberg’s Netflix thriller, Spenser Confidential, was released last week, showing the singer going toe-to-toe with Wahlberg in an intense jailhouse face-off. But on-set, the vibe was decidedly more upbeat. “The first time we met, we did an impromptu karaoke session of ‘Good Vibrations,’” Malone shares, about working with Wahlberg. “The man can dance, he can rap, he can act — he’s just a talented guy.”

4. First tour, then new music?
Malone’s set for a Super Bowl party this weekend in Miami, before kicking off the second North American leg of his “Runaway Tour,” which resumes February 4th in Omaha (see tickets and dates here). After that, it’s back into the studio. “I hope to have a record out for the fans in 2020,” he says.