When Claire Boucher, who writes, records and produces music as Grimes, decided to show off her unshaved armpits in a recent round of press photos, her PR team went into crisis mode. This was not the image they had in mind – they wanted her quirky but groomed, wild but not too wild, more feminine than feral. Boucher saw it another way.

“I was like, ‘Armpit hair! Yes!’ ” she says, sitting cross-legged on a couch in the Los Angeles headquarters of her record label, 4AD. Boucher, 27, is wearing an oversize black T-shirt bearing the name of Ronda Rousey, and fresh white sneakers, with her long hair, magenta at the roots and brown below, twisted into two braids. She looks like Wednesday Addams headed to a rave. “Everyone else on my team was like, ‘No way, no armpit hair, absolutely not.’ So in the end we sent the shots to Big Jay.”

Big Jay is Jay-Z, who signed Boucher to his Roc Nation management company. Jay quickly ruled in Boucher’s favour on the photos. “He just said, ‘Yes, let her keep the hair’,” Boucher says with a smirk. “He overruled everybody. It’s just good to have an artist at the head of the management, because, like, he’s an artist. He gets us.” Jay-Z signed Grimes in 2013, shortly after her 2012 breakthrough, Visions, made her a rising star, critical darling and huge festival draw. Soon she was spinning legendary house parties in Ibiza, attending the Met Ball and appearing in fashion’s front row.

Buying into the Grimes project means buying into Boucher’s independence; she often calls herself  ”an auteur” without sarcasm or irony. Boucher made Visions entirely by herself in under a month, locked in a dark room with only GarageBand software, Adderall and whatever food friends thought to bring her. She made all the beats, sang all the vocals, played all the instruments and drew all the album artwork. Boucher says she made the album “at such a psychotic pace” to meet a deadline set by her then-manager. But even in that short span, she came up with something both defiantly weird – the big song off Visions, “Oblivion”, features an eerie, childlike voice trilling glossolalia over thumping beats you feel in your chest – and addictive, like a house party in an ice castle.

When Boucher talks, it’s like listening to the Internet out loud. She clicks open one conversational tab after another, and it’s your job to keep up. One moment she will be extolling the merits of Rousey (“She’s so psychologically intense!”); the next she will be giving hair-dye tips (“Get the Manic Panic kind, like the superbleach. Then use the purple toner”); the next she’ll veer into a sombre place, talking about how she got so depressed one night last year that she did tequila shots and decided to write a sunny pop hook in the wee hours to stave off the blues. 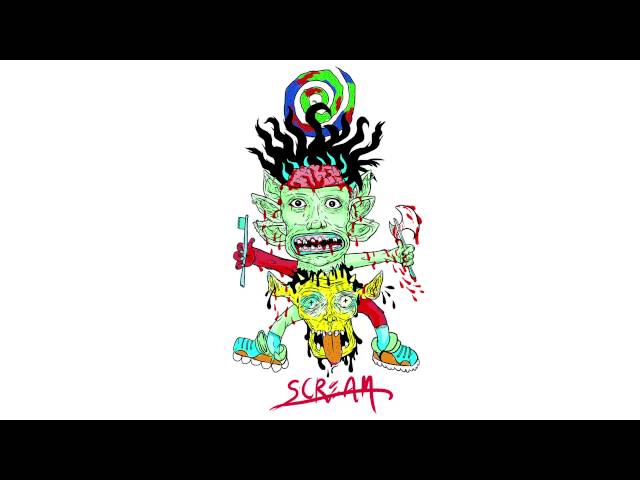 Boucher’s new album, Art Angels, is even more jubilantly all over the place than Visions. Some of it sounds like straight pop: “California”, the song that came out of that tequila-fuelled all-nighter, recalls, of all things, late-period Dixie Chicks (Boucher is a huge fan; she says that when she met Natalie Maines she “had a panic attack”). Some of it sounds like alien music of the future. “Flesh Without Blood”, which Boucher calls “a diss track” about a false friend, undulates in Doppler waves; she says she added so many beats that the song kept crashing her computer.

Raised in Vancouver, Boucher grew up loving drawing and ballet before moving to Montreal in 2006. While studying neuroscience, she began making noise rock on her computer, and after seeing the category “grime music” as one of the choices on MySpace, she adopted it as her stage name. Soon she was so enmeshed in becoming Grimes that she dropped out of college to make music full-time. “My dad still asks if I can finish my degree,” she jokes. “My parents understand what I do, but they still get mad when I swear on the Internet. They are like, ‘Your grandmother might see this!’ ”

Swearing on the Internet, ironically, is part of what made Grimes a phenomenon. She began speaking out on Twitter and her Tumblr about everything from sexism in the music industry to loving pop music like Psy and Mariah Carey. Boucher’s posts made her a target – of those offended by an anti-sexism manifesto and those who thought she had sold out with Visions, among other critics. “It started getting hostile,” Boucher says of the heat she took online. “Going from being an unpopular, introverted person to dealing with all that, it was a mindfuck.” She temporarily deleted her Tumblr and plotted her next move.

Boucher recorded a new batch of songs that never congealed, before moving from Canada to Los Angeles with her boyfriend, musician James Brooks of the band Default Genders, to finish Art Angels. Once again, Boucher recorded entirely alone (though she did mix the songs with Madonna and U2 producer Spike Stent). She’s glad she took her time: Unlike Visions, which “wasn’t really finished when we put it out”, Art Angels is an album she can stand to listen to without cringing. Even as she cops to making pop songs for Art Angels, Boucher is adamant that she isn’t a pop artist. “Pop music is made by teams of people,” she says. “I make independent music. I think it’s important not to be artistically indebted to anybody if you want to stand for something. I want to be like Trent Reznor.”

Recently, Boucher launched a “collective” called Eerie Organization to put out the work of fellow female musicians. In an industry where women represent a mere five per cent of all producers, Boucher’s commitment to producing her own music isn’t just essential to her sound, it’s a political act. And it is also what may make her a new kind of icon. “When I was a teenager, there weren’t women I could relate to,” she says. “It was really hard for me to visualise this career, because it didn’t exist.”