Sydney punks, Straight Arrows, are currently galavanting overseas somewhere in celebration of their latest full-length release Rising. The Frowning Clouds’ songwriter/guitarist, Zak Olsen (picture above, far right), is filling in on drums for the tour because, according to Straight Arrows frontman Owen Penglis (pictured above holding the small dog), “Adam’s got a job”.

In a blatant exercise of “synergised fanbase cross-pollination” that would rival the Lady Gaga and Tony Bennett pairing of 2014, we decided to get Olsen and Penglis to fire questions at each other. At the same time. As expected, the result is a somewhat messy battle of wits and roles, reminiscent of the time Ray Martin sat down for a beer with Michael Parkinson.

Straight Arrows (Owen Penglis): Ah bummer! Rome’s cool – kinda of like a more religious Spain with heaps more ancient monuments all over the street. It’s Sunday today and really quiet on the street.

SA: Thanks heaps for playing drums on this tour Zak – I like how it took you a couple of shows before you could keep up and not almost vomit by the end. What is the Frowning Clouds’ practice/exercise regiment at present?

FC: It was quite a workout touring with you guys but I’ve got big muscles now so thats cool. The Frowning Clouds haven’t had a proper practice in a little bit but most of us live close together so we’re always making songs up and doing Sabbath covers.

FC: To me Straight Arrows sound like a drunk Ohio Express, what does it sound like to you?

SA: That sounds like the biggest compliment we’ve ever got. That or the guy in Antwerp saying we sound like “The Kinks but high”.

FC: How come you didn’t call your second album “Its Happening again” like you said you would?

FC: The second album wasn’t called “Paper Jungle” because we’re always making up new album/band names and depending on what day you ask us we’ll give you a different answer. Nick is good at doing it so he’s made all our album names.

FC: When you make an album, do you specifically write songs for it or do you use old material? Or is it both?

SA: I usually try to write new album songs in a block so you get a cohesive group of tunes that sound like they belong together. But then you’ll find an old track that fits in with it and sometimes that works out too.

Related: Listen to The Frowning Clouds ‘Legalize Everything’

SA: How about you guys? It sounds to me like Legalize Everything is awesome, and also mainly a Zak written effort. What happened to those other guys?

FC: Yeah it does seem like most of them are mine but actually five of them are Nicks and one of them Daff made the music for (“Move It”) and I sang over, which is my favourite I think. Daff is [a] riff king. One of Nicks songs (“See The Girl”) is actually from about five years ago. I couldn’t imagine making a song like that now let alone five years ago. Magic!

SA: When you guys started (as what, 15 year olds?) did you ever think you’d still be playing in the same band at this point?

FC: I was 14 and Nick was 16 when we first started as a two piece doing ‘folk’ songs and Velvets songs and that. Daff, Ben and Brenton came in a year later and that was around when we heard Nuggets and Back From The Grave and all the rest. I actually remember saying we wanted it to last for ages so I guess in that respect we’re quite successful [laughs]. I remember when Clouds started up and we thought we were the only garage/punk band in the world. Then we caught wind about you guys in Sydney and we thought that was cool that some other people were doing garage without cheesy organ (and tuners, ha), do you think the plethora of garage bands around now is a good or bad thing?

SA: I reckon it’s important – every city should have a few shitty garage bands. Hell, I’d rather almost anything than a world of limp indie rockers. Do you think Geelong’s present killer music scene is specifically informed by its rich past (Deacons, through to Bored and the late 80s scene) – or is it just luck, and now there’s a devoted few keeping it together (you guys, Living Eyes, and everything to do with Antifade Records)?

FC: I actually don’t think the Geelong music scene at the moment is in anyway informed by the past scene. If you ask most of the young bands at the moment about Bored! or The Deakins (WOO!) they’d say ‘who?’. I don’t know why but it just so happened that heaps of kids here wanted to start garage, punk and psych bands which is cool with me. Having said that it might seem like more of scene than it actually is, because everyone plays in everyone else’s bands. Who are some of your favourite Australian bands at the moment?

SA: Pretty much anything on Antifade is gonna be killer. And Ausmuteants are really killing it at the moment. We took TV Colours on our album tour a few months ago. Hopefully they get around to making some new recordings soon.
What are you digging? And speaking of, do you remember when your bassist was trying to pull off Devo moves live? Who was the first to shut that idiocy down?

FC: Australia is spoiled rotten for good bands at the moment, some of mine are Cobwebbs, Zig Zag, School Damage, Krakatau, The Stevens, Ausmuteants, Living Eyes, Babe Rainbow, Wet Blankets…the list could go on and on. As for Jakey doing Devo moves, nothing was said, maybe he saw a video of himself? haha. 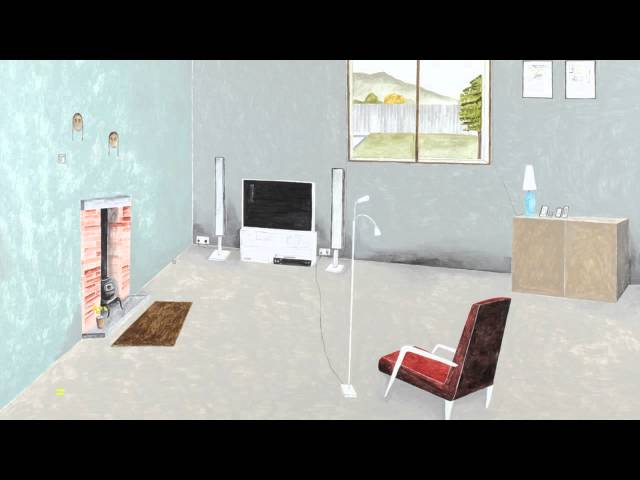 FC: Do you (or any other members) have other musical things going besides Straight Arrows?

SA: I’m kinda all tied up recording other people’s bands to work on any other projects, although I’m always recording my own stuff that doesn’t make it on to Straight Arrows records. Al’s got Palms (and half the record is already in the can). Angie’s got her solo project (with a new LP waiting for a final mix), plus Ruined Fortune. And Adam’s got a job. How’s about you guys? I like that Traffic Island/Sleepyhead split cassette you and Nick did a while ago.

FC: Yeah we’re all quite incestuous and constantly start new stupid projects and some just kinda lurk around for a while. Jakes been doing Ausmuteants and a awesome new band called School Damage. He’s also got Drug Sweat and Leather Towel who are both great. Some of us play in a band called Hierophants which will have an album out at the start of next year. We also just did a Hard/Heavy Psych tape under the name ‘ORB’ and Harmer is melting hearts which the excellent Zig Zag. You must listen to them if you like the idea of Brian Wilson fronting Big Star or The Clean.

SA: We just played on a boat in Venice, that was pretty cool. You guys have toured Australia and Europe pretty extensively – how would you compare the two?

FC: I would say they’re nothing alike. Touring in [Australia] isn’t really ‘touring’ because you go back home during the week. Also in Europe they stuff you full of food and give you a place to kip. Great stuff.

SA: Mike Nesmith – best songwriter and best hats out of the lot. ‘Though Mickey Dolenz usually sings the toughest tracks. What do you reckon? And what’s the funniest thing someone from FC has ever shoplifted?

FC: My favourite Monkee is also Nesmith and I think Dolenz is my second favourite because of his voice. I can’t stand Davey, he’s like Zac Effron of the 60s. As for the shoplifting thing, I really couldn’t say.

FC: How many Ramones does it take to change a light bulb?

SA: It doesn’t matter, Marky will still tour for it and take credit. You guys got to play on Spicks and Specks AKA ON TV! Are people in the TV world really weird?

FC: Wrong answer for the Ramones question. The real answer is ‘1-2-3-4!’ Yes we played on TV. It was strange but we got to choose our own songs to cover and they fed us well. Also getting makeup done is always glamorous and fun.

SA: We could make 100 records for that. Let’s just take a holiday and buy some weird equipment and see what happens.