Just a few months ago, Mötley Crüe – the band that made Nikki Sixx famous – played its last-ever gig. Today, the bassist couldn’t be more contented. It’s a mid-March morning and Sixx describes it as a “beautiful day in Los Angeles.” He’s already been to the gym, he’s en route to do his radio show, Sixx Sense, and tonight he’ll celebrate his wedding anniversary. “I’m happy, man,” he says. “It’s a good day.”

One thing the bassist is particularly excited about is the promise of new music. Although Mötley Crüe aren’t done-done (they’re just through with touring), the 57-year-old bassist’s other band, melodious hard rockers Sixx:A.M., will put out its fourth album, Prayers for the Damned, Vol. 1, on April 29th. The record is a far cry from boot-stomping Crüe bangers like “Shout at the Devil” and “Dr. Feelgood.” Instead, Sixx and his bandmates – frontman James Michael and ex-Guns N’ Roses guitarist D.J. Ashba – have constructed 11 sprawling, catchy, ornate AOR missives. Lead single “(Rise) Get Yourselves Together” is an urgent plea for resilience, and it generally reflects Sixx:A.M.’s positive outlook – a sharp contrast to Crüe’s debauched worldview – which they will be bringing on the road this spring.

The band began writing the new LP last February, when Crüe were embarking on the last leg of their farewell tour, and by April they’d come up with some 26 songs and decided they should make a two-album set. “The last song on Vol. 1, ‘Rise of the Melancholy Empire,’ is the beginning of the first song on the next record,” Sixx tells Rolling Stone. “The idea for us behind it being a double record is we know that if we give you 22 songs, you’re going to have a hard time giving all that music the attention that we gave it. We put a lot of work into the music. We want to give it every opportunity.” It’s an attitude that fits with Sixx and his bandmates’ forward-looking M.O. But before he delved into the new record with Rolling Stone, he took a moment to reflect on how he got here.

How have you felt since you’ve said goodbye to Mötley Crüe?
I’ve felt proud. I’ve felt content. I’ve felt that we did the right thing, and that we did it on our terms. I would like if some of my heroes had called it a day when it was time, instead of dragging around a 50-percent version of what they were, or a quarter.

What do you mean?
I understand that some people don’t know how to manage their money, and they don’t know how to build a career sometimes, and that’s no fault of their own. So sometimes you have to do things. Look, you’ve got a band called Europe doing a Geico commercial; that’s not in my future.

Have you had any regrets since the final gig?
No. I’m excited about adventure. Sixx:A.M. gracefully and patiently waited in the wings, while the mother ship, a.k.a. Mötley Crüe, had touring we had to do. I’ve heard Tommy say that it’s hard to throw yourself 100 percent into a project, when you have to go out on the road to do other projects. We ended Mötley Crüe on our terms, so now we have the time – each guy, individually – to do whatever he wants to do. And that’s cool, man. Listen, not to be morose, but there’s more years behind me than in front of me. So I’m fucking getting to it.

“I’ve felt that we did the right thing, and that we did it on our terms,” says Nikki Sixx of Mötley Crüe’s farewell. Wolfram Kastl/dpa/Corbis

How does touring with Sixx:A.M. feel different than with Mötley Crüe?
James, D.J. and myself are really great friends. I took my dog out for a walk today, just to clear my head for the day, and I called D.J. as friends. I just called him to say hi. Before we were done, he was playing guitar over the phone to me, and we wrote this really cool piece of music that we’re going to get together in the studio for a “we don’t know what” project. It’s exciting because we’re friends. James will call me up with no agenda. Our music deals with pretty dark subjects, but the giddiness of our friendship helps us get through that. We push each other on every single level. We’re not in competition with each other. If D.J. wants to push me to do something on bass, I’m 100 percent open to it. Everyone is.

Sure. My point, though, is that I asked you to compare Mötley Crüe to Sixx:A.M., and your answer was a list of positive things about Sixx:A.M., seemingly implying that the opposite was true of Crüe.
Right, right, right. No, I hear what you’re saying. I mean, we were married a very long time [laughs]. We have a lot of fuckin’ gold and platinum records under our belt, but we also got a lot of miles on our knees too, you know?

Let’s talk about Sixx:A.M. Who came up with the concept behind Prayers for the Damned?
The phrase “Prayers for the Damned” was partially taken from a Charles Bukowski book that I was reading, The Pleasures of the Damned. It’s a collection of his poetry. And after a visit to the catacombs in Paris, I ended up combining the two. 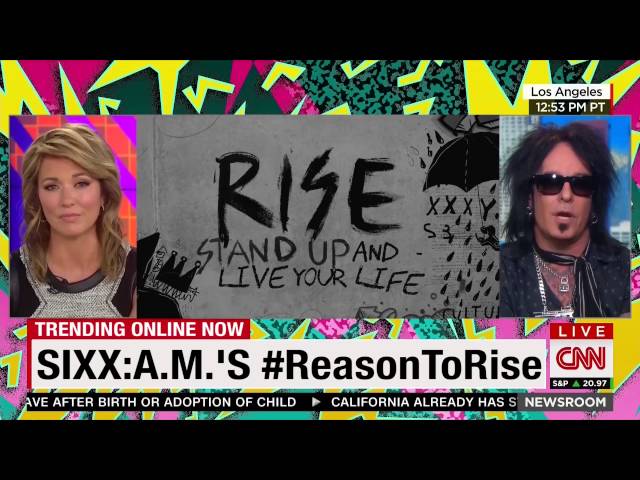 You’ve always written somewhat Bukowskian lyrics. Has he always been an influence?
To be honest with you, almost all my lyrics have been influenced by Beat Generation writers. The temperament of them, the tempo. If you tap out anything by Burroughs or Kerouac, the way it’s written, you can tap it out to the same rhythm as “Shout at the Devil.” It’s always been the tempo of it, and the colour and the repetitiveness and adjectives. It’s fascinating to me because I like to keep getting another hint of the story in a different way. I like the twists and turns. I love the way Beat Generation writers wrap the story up multiple times, sometimes even within a paragraph. It’s very hard to do that in three minutes. It’s a challenge I find fascinating.

There’s a lot of thought behind your lyrics.
A lot of guitar players spend their whole life trying to just be better and better. But when it gets time for the lyrics, they just say, “Well, it’s OK to be OK.” And I never really understood that. The lyrics have to be as important as the guitar, as everything else. Bruce Springsteen has done that. Ian Hunter’s done that. Dylan’s done that. Bon Scott did that. But in general, I find myself sometimes frustrated, especially in rock music. I think country is better at it than rock, in general.

You’ve said that Sixx:A.M. is not a political band, but you have two songs with titles containing “Rise.” On “(Rise) Get Yourselves Together,” James sings, “Even when they strangle you, get yourselves together/ Strike down all that oppose you.” That sounds political.
We are not a political band. We probably never will be a political band. But we are a reactionary band, and whether it’s a reflection of personal struggles, struggles in the lives of people close to us or things we see in the planet, it would be a bit shallow of us to have not said something. Every time we turn on the TV or the radio or pick up the newspaper, there is the American presidential campaign, which is dancing around becoming a version of a circus, and other stuff happening on the planet. That’s where the other “Rise” [“Rise of the Melancholy Empire”] came from.

“We probably never will be a political band,” Sixx says of Sixx:A.M. “But we are a reactionary band.” Paul Brown

What inspired the song specifically?
I’d gone to Europe to do some shows [with Mötley Crüe], and I was in the south of France doing some photography one day. James and D.J. were in a Las Vegas studio. After France, we went to Germany for a concert, and it was very powerful for me. I walked offstage, picked up my phone and found an e-mail from James and D.J. that said, “Listen.” They’d sent me some music. At the same time, my tour manager, Tim Krieg, told me about the Paris attacks.

How did you feel when you heard about the Paris attacks?
It really levelled me. I was far away from my family. Not only had I just been in France, Mötley was supposed to have done a show in Paris. And I’d been working with French record companies for Sixx:A.M., and the merchandising guy [Nick Alexander, who died at Bataclan] was out with Mötley Crüe when we were over in the U.K. and the bus companies were the same bus companies.

I went back to my hotel room and thought about this country I’d just been in and all this news about people that we knew. And I wrote the lyrics to “Rise of the Melancholy Empire” to that song that James and D.J. sent. I sent it back, and James sang it. The song is hopeful, but also it says, “May God rain His hell upon you.” It’s a song we’ve wanted to do for a long time. So again a band that’s not political was affected.

I mean, when did it become that you can’t go to a concert and not consider your life in danger? That’s a horrible thing. We’re all in agreement about that. But are we going to stop going to concerts? Are we going to stop playing? I don’t think so. I just didn’t think it was the right thing to do.

That’s a very mature subject matter for a song.
For me, being an artist is about living in the moment. The longer you’re around, the more you have to say. When I was young, I thought I had everything to say. And I realised only part of the story was being told. But to me, “Girls, Girls, Girls” is equally as important as “Kickstart My Heart,” as equally important as “Life is Beautiful” and “Rise.” It’s all part of a journey.