For Tommy Lee, saying goodbye to Mötley Crüe this past New Year’s Eve was easy. “It’s sad it was the last show, but in the same breath it was also a celebration,” the drummer says of the hometown gig, which bookended the pioneering L.A. glam-metal group’s so-called decades of decadence. “It was really cool to finish where we started. We accomplished everything we set out to do.”

Fans will be able to relive the fiery concert when Mötley Crüe: The End – a film combining footage from the group’s final L.A. shows – hits U.S. theatres for a one-time screening on June 14th. Footage of the band’s heavy, kinetic performance of “Girls, Girls, Girls,” which kicks off the film, is premiering here. In just a few minutes, it captures the essence of 34 years of Mötley Crüe: pyro, smoke, motorcycle sounds, leather, dancing female backup singers, cutting guitar and crashing, sometimes spinning drums. And it’s just the first song. The rest of the film contains performances of “Shout at the Devil,” “Kickstart My Heart” and “Home Sweet Home,” among other hits, as well as Lee’s ill-fated final roller-coaster drum solo (the apparatus conked out midway through) and emotional interviews with the band members.

The drummer caught up with Rolling Stone in advance of the film’s release for a revealing “exit interview,” where he looked back on the highs and lows of three decades of Mötley Crüe and opened up about the weirdness that surrounded the group’s farewell concert.

How do you feel about the final Mötley Crüe concert now that nearly half a year has passed?
I always said none of this is going to sink in until God knows how long afterward. You’re still coming off of that high of touring for nearly two years. Last month, I started to think, “Wow, shit. This is for real.” But I didn’t have bad feelings about the tour. I looked around and smiled, going, “Fuck, we killed that shit.” I’m just happy to be home and enjoying life.

Have you been in touch with the other guys?
I haven’t spoken to Vince [Neil] or Nikki [Sixx]. I speak to Mick [Mars] a lot. He’s actually working on some new stuff, and I’m really happy for him.

Let’s talk about the final show. Did you feel anxious before it began?
Yes. Oh, my God. So anxious. But I’m always nervous before any show. I always get tweaked out 10 minutes before the show. I’m a fucking basket case. I’ve told myself, “Dude, the day that you’re not nervous before you go onstage, it’s time to pack it up because that means your passion is gone.”

What was the band’s pre-show ritual? Was it different for the final show?
No. We just see each other up onstage and let it rip.

Even stranger, after the final night, we had a big party backstage on New Year’s Eve, and I never saw the other guys. We never even said “goodbye.” Fucking strange as hell, dude. I mean, what the fuck?

Why would nobody say goodbye to you?
I really don’t know. I mean, if you’re getting divorced, you still give your ex a hug, or flip her off or something. You either get a kiss or a slap, or … something. Give me a sign! Let me know you’re alive.

So you really haven’t spoken to Nikki or Vince since the show.
I think fucking Nikki unfollowed me on fucking Twitter, like, the next day. I was like, “Wow. OK, dude.”

Was there an issue with Nikki leading up to that?
There’s always been issues.

There’s a scene in the film that’s coming out to theaters in which you say you felt the creativity within the band was done. When did you have that realisation?
I’ve had it twice. I had it in 1999 when I quit. I needed to do something else creatively because nobody wanted to really experiment and push the boundaries. And then I came back [in 2004], and we made some new music for a while.

The Saints of Los Angeles record [in 2008] was the last time we were creative together, but not reallycreative together. Everybody did their part separately. It was just a really strange process and I was like, “This is not really how it works.” The record came out OK, but I don’t know. That’s when I started realising we’d kind of hit the wall. You need to have three other very open-minded people to continue that process and explore and take chances and really try to make something new, and that’s just not happening there.

Despite the strange way things ended, did any of you have last-minute regrets and want to put the breaks on retirement?
[Laughs] Nah, not really. I mean, shit. We did it our way, man.

There’s a lot of pyro around you during “Girls, Girls, Girls” and throughout the show. How do you get used to that?
I love it. It’s hot as fucking balls up there. At all of those shows, my drum tech was behind me with a Super Soaker. Sometimes the flames get so hot that I get burnt. Directly behind me, there was this ginormous flaming pentagram. It had to be 30 feet in diameter. When that thing lights up, if I’m not wet, it’s impossible to sit up there.

Did you ever catch fire?
No, but I’ve had a lot of sparks land in my hair and you can smell the smoke. It’s gnarly.

You got a break from the flames on this tour with your roller coaster for your drum solo. But it malfunctioned at the final show. What happened?
First of all, I was like, “It’s the last show. It’s New Year’s Eve. Why do I feel like something’s gonna fucking go wrong?” I don’t know if I jinxed it. That whole thing is controlled wirelessly from a guy on the ground. We mounted a shit-load of wireless cameras on there to capture the last night, and we had conversations before the show, saying, “If we get some wireless signals that are crossing, the roller coaster goes into the safety mode, which is where it just shuts it down.” And, of course, that’s what happened. I was like, “Fuck. I fucking knew this was gonna happen.”

When did the feeling of panic go away?
Well, I was stuck upside down for quite a while. We edited it down in the movie. But my head was pounding. The blood was going to my head. I can only stay upside down for so long, and then I start to get weird.

I saw one of our techs climbing up the rig, and I was like, “Oh, thank God. This thing’s gonna get right-side up here in a minute. I’ll be able to breathe.” They got it right-side up and he’s yelling in my ear, “Dude! We’re back up and running. It’s good to go.” We were at the end of the track in the back of the arena. So I was like, “You know what? Fuck it. I’m climbing down out of this thing because I don’t want to take a chance that it gets stuck midway.” If it got stuck in the middle, the plan-B escape route is not cool: They gotta come, unstrap you and put you in a rappelling rope and lower you down. It’s ugly. I was like, “Fuck it. I’m out.” 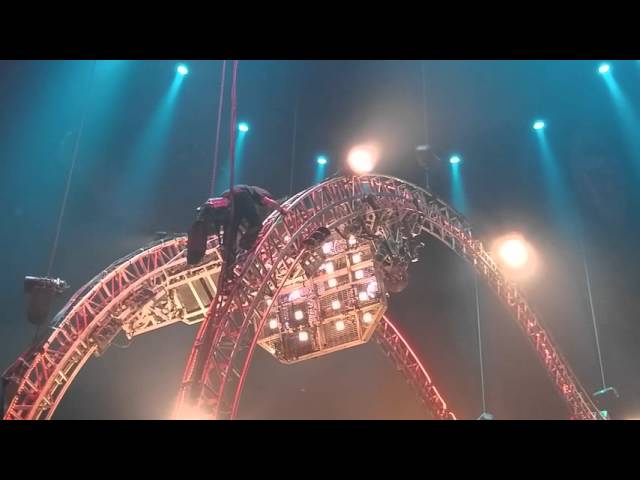 You filmed two nights. Why did you decide to keep the breakdown in the film?
Because it was actually entertaining.

During your drum solo, you play music by Kendrick Lamar, Black Sabbath and the Chemical Brothers. It’s amazing you were able to license those for the movie.
I knew that was going to be a licensing nightmare, and it got done. Fuck, I’m impressed because a lot of those songs, especially “Uptown Funk,” that’s huge. There’s a lot of big tracks in there. I can’t believe it, actually.

Is that your mix?
Yeah. It’s all of the stuff that I love, man, and some sort of underground stuff that nobody might know of. This shit just moves the hell out of me, and I want to turn Mötley fans onto it, because chances are, they probably would never listen to anything like that. There’s so much amazing music out there, man, especially in the electronic world, where the frequencies are just so fucking huge. It just moves your body in a totally different way than any rock band.

Have fans said you turned them onto new things with your solos?
Yes. I get people asking me, “Dude, what is that music that you’re rocking to during the drum solo?” all the time. I love it.

At the very end of the movie you’re walking out, you’re high-fiving fans as you say goodbye. What was that like?
It’s definitely weird, dude, especially on the last night. It was like, “Wow. This is really happening. Shit.”

It’s been five months since the last show. What’s an average day like for you now?
My plan was to take a year off and just chill the fuck out. I remember my fiancée going, “Dude. There’s no way you’re gonna sit around for a year.” And she’s right. I’ve been doing some remixes for some artists and I’ve been down there in my studio writing stuff. I didn’t even get close to a year. I can’t sit still.

Will your new music going to be more electro-focused?
Yeah. There will definitely be electronic frequencies going down, for sure. Once you’ve had that, you can’t go back.

“It sure would be fun to start over knowing what I know now.”

When you look back on 34 years of Mötley Crüe, do you wish you did anything differently?
I really don’t. We accomplished everything that we set out to do. But it sure would be fun to start over knowing what I know now [laughs].

What do you mean?
Fuck, you’re just hip to how the business works, how touring works, how life is. And it probably wouldn’t be fun, knowing what you know now and doing it all over again, but sometimes I think, it might be kind of cool.

The Dirt would be a pretty different book.
Yeah. Exactly.

How do you feel about Mötley Crüe as a whole when you look back on it?
I don’t have ill feelings at all. I’m saying this with a smile on my face. I’m just happy to be part of something that was so impactful on so many people’s lives musically and lifestyle-wise. That’s pretty fucking insane, and I’m really happy that we decided to end it on a high note and not really drive this thing into the ground like so many of our other musical peers have. It’s just really cool and quite an honor to kind of bow out when it’s still larger-than-life. It could have gone a different route.