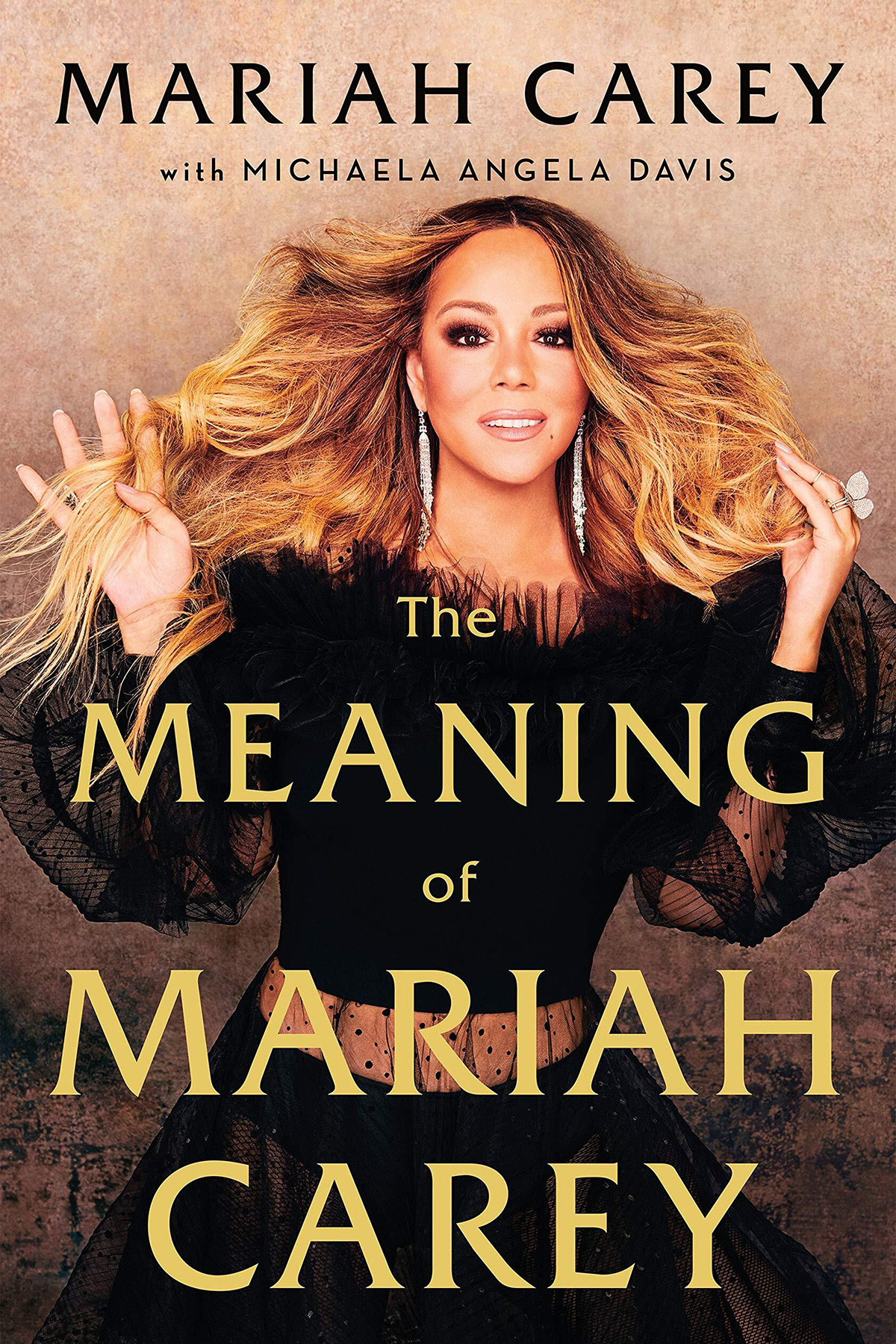 You don’t know her. Nobody knows her. The one and only Mariah Carey has always been She Who Must Not Be Known, and her new book The Meaning of Mariah Carey (with Michaela Angela Davis) is an instant classic of pop diva lit. For any connoisseur of music memoirs, it’s more than just Mariah’s blessing to the suffering world of 2020; it’s the diva leadership we need and deserve right now. Every page is packed with her over-the-top personality — dishy, funny, moody, chatty, with more shade than a Christmas tree farm.

What other celebrity would reveal they reacted to the events of 9/11 by going to the spa to get their hair done? (“It was a blur, but I pulled myself together. I got some highlights, a cut, and a blowout.”) Who else would sum up her romance with New York Yankees shortstop Derek Jeter like this: “Just like his position on the team, our relationship was a short stop in my life”? Who else would recall the time Luis Miguel won her heart with a Bulgari diamond necklace and add, “Diamonds may not be my best friend, but we’re close”?

Nobody, that’s who. If any other star could have written this book, we don’t know her. Case in point: If you search for the name “Lopez, Jennifer,” in this book, sorry, but you’re shopping for hustlers in a rainbow store. The closest she comes is when she’s discussing her 2001 single “Loverboy.” “I had chosen ‘Firecracker,’ by Yellow Magic Orchestra as the sample” — sadly, Mariah doesn’t pause to go deeper into her Japanese prog fandom — “which did not go unnoticed by Sony executives (and spies).” Sony gave her idea to “another female entertainer on their label (whom I don’t know).”

There’s also the classic moment a few years ago when Mariah performed on New Years Eve in Times Square, on live TV, and made the fabulously regal decision not to sing or even fake it. “There’s a certain performance of mine in the bitter cold wearing a sheer bedazzled leotard and eight-inch Louboutins at the world’s busiest intersection, in intimate proximity to stinking, putrid garbage that everyone seems to want to remember, and that I, quite honestly, often forget.”

Mariah’s the rare diva who has never had a non-famous moment or serious flop, ever since breezing into megastardom in her teens — to her, constant public adoration is the oxygen she breathes. She often mentions her friends — but it’s her enemies list that makes this book so tasty. At one point Mariah mentions her fantasy of starring in a remake of All About Eve — but she’s already living out her saltiest Bette Davis dreams.

The wildest revelation is that it takes 218 pages for Whitney Houston’s name to come up. Somehow, the first time Mariah seems to notice her rival is in 1998, when they finally meet for a Disney movie duet. This has to be her zenith of Not Knowing Her-ology. “After the initial iciness (built up by outside forces) wore off, we developed a real fondness for each other …. To us, it never felt like a competition. We complemented each other.” Any Whitney fan can imagine a raised eyebrow and a “Hell to the No” at that, but hey, at least Mariah takes the high road and decides not to allude to drugs, not until the next paragraph. “Bobby Brown was around, and I don’t know what else was going on, but that wasn’t my business. I just know we had fun and laughed a lot.”

Of course, Whitney is a key figure in the Mariah story, as the queen who built the castle this princess took over — after five years on top of the music world, Whitney suddenly found herself going out like Cristal, with Mariah as the younger, hungrier Nomi coming down the stairs behind her. It’s why Whitney fans secretly loved Mariah, much as they loved to complain about her — Whitney did the fiercest singing of her life after Mariah showed up to scare her. Without Mariah, there would be no Bodyguard, no “I Will Always Love You,” no “Heartbreak Hotel.”

But Mariah’s childhood was a heartbreak hotel in so many ways. She goes into sad detail about her memories of her abusive family, her “ex-brother” and “ex-sister,” her racist mother, how her only friend was her bedroom poster of Marilyn Monroe. She got her big career break as the the child bride of a man nearly twice her age, who happened to be the CEO of Sony, Tommy Mottola. Sony’s historic push behind Mariah was seen as suspect at the time — indeed, it seemed like her catalog was dotted with in-jokes about it. One of her albums was titled Music Box, an obscure reference to Phil Spector’s nickname for his wife/protegee/prisoner Ronnie Spector, certainly a disturbing reference for anyone who got it. The same album had a hit with the Ronettes-quoting “Always Be My Baby.”

Carey chronicles her hellish memories of being married to Mottola, whom she accuses of holding a butter knife to her face. The best she can say for him is he talked Ozzy into coming to their wedding. Also, she likes how his best man was Robert De Niro. It’s the groom who’s her problem. “His presence felt dense and oppressive. He was like humidity — inescapable.”

Her first experience with actual romance is with Derek Jeter, one of the book’s most touching interludes. “Derek played the same position the great Joe DiMaggio (Marilyn Monroe’s iconic second husband) played on the Yankees, connecting him to my Marilyn fascination,” Carey writes. “Derek was only the second person I had slept with ever (coincidentally, his number was 2 on the Yankees).” Jeter comes off better than any of her exes, even if he makes a lame first impression. “His Armani suit didn’t cover up the Kalamazoo in him. He didn’t have the New York slick vibe that I had become so accustomed to. I’m not being shady, but he had on pointy shoes.” (This is, in fact, shady. But Jeter is a true gent for never telling her DiMaggio played center field. Let a girl hold on to her dreams.)

She leaves at least one engagement out of the book. (Congratulations, Australian billionaire James Packer — you will always never be her baby.) She does not mention her American Idol feud with Nicki Minaj, or anything else about her Idol gig. But she does recall “All My Life” producer Rick James, “who required a white suit, a white limo, and perhaps some other white accoutrements for his session.” She doesn’t mention Einstein, despite calling one of her records E=mc2. She really underrates the Glitter soundtrack — some critics hailed it as her finest work (until Emancipation came along). But she basically loves everything she’s ever done — and why not?

It clearly pains her to mention Celine Dion while roasting her for oversinging during the 1998 VH1 Divas tribute to Aretha Franklin. “I couldn’t believe anyone would try to upstage Aretha Franklin on her tribute, while singing about Jesus, no less.” In Celine’s defense, the song was “You Make Me Feel Like a Natural Woman,” and if it’s about Jesus, nobody told Carole King, who wrote the song. (But maybe if Jesus could forgive the soldiers who crucified him, it’s possibly time to let go and John 8:7 this grudge? Let the diva without any oversinging sins cast the first high note.)

The biggest bombshell: Mariah made a 1995 grunge album, doing secret double duty in the band Chick. For a Nineties rock fan, this is like discovering Frank Sinatra was moonlighting in a bluegrass group. She was writing songs for Chick way more raw and personal than anything she allowed on her own records. It’s poignant when she describes her envy at the Nineties explosion of female rockers, who seemed so free and powerful. “They could be angry, angsty, and messy, with old shoes, wrinkled slips, and unruly eyebrows, while every move I made was so calculated and manicured.”

I always knew there must be some reason I kept that Chick album Someone’s Ugly Daughter — got the CD in the mail as a promo, played it because I liked the title, kept playing because I liked the tunes. I put their version of Cheap Trick’s “Surrender” on way too many mix tapes. But I had no clue it was Mariah in grunge drag. There was something so mysterious about it — a major-label corporate rock release, with no buzz, no backstory, no live rep? From L.A., of all places? I asked around, but nobody knew the deal. We figured it was some manager’s niece’s college band. Nobody would have guessed in a million years it was Mariah. But it’s yet another example of what her book insists: even now, after all this time, we just don’t know her.