If you looked away for five minutes, this is what we know about Ashley Frangipane – or ‘Halsey’, as the anagram goes. She’s 20. She’s from New Jersey. She’s the most talked-about pop contender of 2015, who emerged out of nowhere last year with the delicate electronica demo “Ghost”.

After posting “Ghost” to SoundCloud and iTunes, Frangipane had her door hammered down by Astralwerks, the label behind Nervo, Sia, David Guetta, Kylie and other pop pioneers. Her debut album is set for release later this year, but she’s clocked up bounteous column inches already.

On Twitter, her bio sighs that she is “running out of short sentences to summarise my existence. Try Wikipedia.” Her Wikipedia entry opens with the gloriously precocious “Halsey was born in New Jersey, but identifies with New York.”

Within months, legions of fans on social media adopted handles in her honour – @hotpinkhalsey, @3amhalsey, @bluejeanshalsey – a phenomenon that Frangipane blithely describes to Rolling Stone as “the modern-day equivalent of slapping a sticker of someone’s band on your binder, or wearing someone’s hoody. I understand it.”

And while there’s a tradition of social media pop stars becoming famous without having earned their stripes (Halsey’s second ever gig was supporting The Kooks to 1,500 people, hardly a long, hard slog), on stage she proves to be entirely at home and entirely herself.  ”A lady in catering said to me today, ‘I thought you were in a band?'” she laughs down the phone from Pittsburgh, the latest stop on a US tour. “I said, ‘I am one.’ ‘But you’re wearing street clothes,’ she said. I said, ‘This is what I wear on stage – a T-shirt and jeans.'”

Yes, a T-shirt and jeans, sure, but also a shock of turquoise hair and over-sized anime features. Halsey’s a ready-made avatar, a gif, a marketeer’s dream, but she can intellectualise her way out of any label you’d care to slap on her. The Lost in Translation-style video to “Ghost” may have been fetishistic (she makes out with a lookalike in downtown Tokyo), but Frangipane argues it’s about gender fluidity and crossing a barrier. 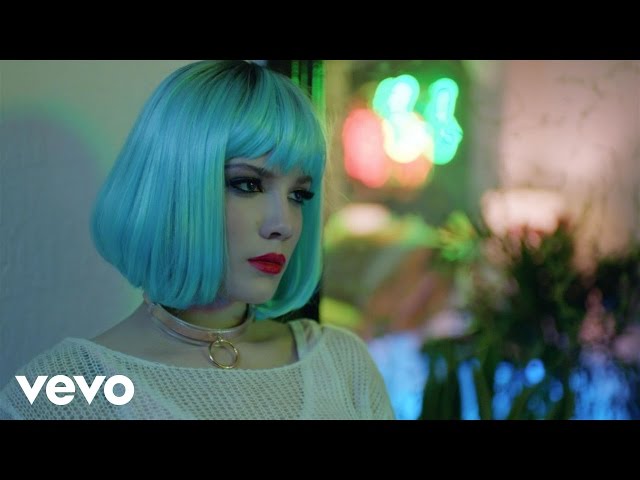 Last year, singer-songwriter Erika M Anderson wrote a whole sorrowful album – The Future’s Void – about losing control of her image and becoming someone not herself, lamenting: “Feels like I blew my soul out across the interwebs and streams”. By contrast, Frangipane understands that you need to call the shots from go to whoa. Her recent rant about misogynistic photographers (“go shoot a beauty pageant”) serves as a mission statement.

In conversation, Frangipane is crisp and precise but fun, peppering her screeds with exuberant “fucks”. She’s always mindful of being quote-worthy. She even specifies when she’s doing “air quotes” down the line, to make sure we’re on the same page. While she has a canny understanding of herself both as a commodity and a serious songwriter, she’s far more abrasively real than your average brand-savvy Gen Y. Take her debut EP, Room 93.

“I call it my ‘little black book’,” she says. “I was what certain people would call a promiscuous girl in high school, which is a shitty word – I hate that.”

Oh yes, it implies mental illness or moral weakness – and why is it only ever applied to women?

“Absolutely!” she says, pleased. “I had an interviewer once say to me, ‘Your songs all sound like they’re about different people. Have you really had sex with that many people? Doesn’t that bother your parents?'”  Her voice rises in indignation. “First of all, you don’t know if I’ve had sex with all of these people or if there was someone I had a crush on… who are you to make that assumption? Second of all, I’m proud of that record.

“I’m a songwriter and I’ve come to believe that it’s my job to immortalise the people around me. There’s an old legend that goes: ‘You die twice in your life. The first time is when your physical body is returned to the ground. The second time is the last time someone ever says your name.’ So the purpose of my music is to immortalise my life and the characters in it to the best of my ability. I consider myself to write true-to-detail songs where, dialogue, characters and actions are kept in place.”

Tellingly, Frangipane was born in 1994 and raised by her young mother on the feminist female artists of the era – Tori Amos, Ani DiFranco, Alanis Morissette – who favoured no-holds-barred, confessional writing.

“I’d be in the car listening to Tori singing ‘A Man With a Gun’, about her experience of being raped, and I couldn’t understand it but I could feel the power and the anger,” Frangipane says, her voice rising with an internal barometer. “You had these female artists writing from such a personal perspective – like Alanis saying, ‘Would she go down on you in a theatre?’ or Liz Phair saying, ‘We haven’t fucked yet but my head’s spinning’ – which was radical language at the time, and yet the pop world embraced them. Jagged Little Pill got a Grammy! It’s massively, massively responsible for why I’m here and it’s something I want to reignite – this idea of a woman who doesn’t bite her tongue, who isn’t afraid of being wild or inconvenient.”  While she’s unabashedly unafraid of being “pop”, Frangipane considers herself to be a songwriter rather than a singer.

“I joke all the time that I have an awful voice,” she says, despite the many clips to the contrary that show her singing live, acoustically, in one take, with a unique vibrato style. “The people I look up to as vocalists are Patti Smith, Bob Dylan and Conor Oberst, because they had something to say and the fact that they’re not Mariah Carey or Elton John isn’t going to hold them back. I didn’t make it through the first round of the X-Factor audition, but I got a record deal so I think I’m okay.”

This is news to us, but regardless, we’re very thankful she didn’t get through the first round.

“Me fucking too,” she booms, “because I would not be able to be the control freak that I am today. I do everything myself; there’s not a poster that goes out without my approval, but I have to be that way or people would think that I’m there to be taken advantage of.”

The forthcoming Halsey album, Badlands, owes a lot to Tarantino flicks and road movies, as well as graphic novels. The box set will feature a map drawn by Frangipane, to better describe the landscape: a booming metropolis at the centre, surrounded by desert and wastelands.

“Metaphorically, I’ve lived in these badlands for years, in terms of mental state and poor behaviour,” she explains, citing one leaked song, ‘Hold Me Down’ as being representative of that state. “Midway through the record I make the decision to leave, and I leave into this desert, the unexplored territory of my mind. I’m nervous because I don’t know what to expect and the badlands are all I’ve ever known, but I’m optimistic, because I hope to find solace in whatever lies beyond.”

Sonically, it promises to be a far cry from Room 93, “way more raw and industrial”. Her goal was to create a physical environment, creating space and distance by having sonic elements sound far off or close up. “The first song is called ‘Capital’ and you can almost feel the environment around you flatten into nothingness for miles,” she says. “In another song, ‘Drive’, you can hear yourself exiting the car, the door shutting, and then you envisage the rest of the song from outside of the car, as if you’re standing next to a vehicle with really loud music playing inside it. So the objective was to take people on a physical journey, like movies with no pictures.”

Despite the ambitious execution, it’s essentially it’s a coming-of-age record, she says. “I’m 20 years old. If I put out a record when I’m 25 that’s this full of angst I don’t think everybody will think of it as ‘cute’.”