On an industrial back street in South Melbourne, at an address that doesn’t even show up properly on Google maps and with neon lights advertising “massage” parlours on either side (discarded condoms on the asphalt suggest they’re anything but), I eventually find the appropriately named Holes and Corners recording studio behind a nondescript doorway. This is where The Bennies have spent the last few weeks working feverishly on completing their third album, in between playing a support slot on the recent Less Than Jake and Reel Big Fish co-headline Australian tour, and they’re just about to cull the album’s track-listing from 22 to 10 before they jet overseas for yet another international run of shows.

“We pretty much finished 3am the night before and then went straight into the tour the next day,” the band’s bassist Craig Selak says half wearily, half proudly of their recent jaunt with the two American mainstays.

Three of the band’s four members, including Selak, guitarist Julien ‘Jules’ Rozenbergs, and frontman Anty Horgan sit in front of me on couches in the newly built studio’s lounge room, sipping cokes (drummer David “Bowie” Beaumont is out buying a case of Heinekens as we speak), while Rozenbergs rolls a massive joint on the coffee table – playing up to the band’s celebrated 420 champion status.

It’s obviously been a full on period for the self-described “psychedelic-ska-death-metal-doom-punk-rock-from-hell” band as they’ve thundered through this recording process while still playing shows, and each looks equally thrilled and exhausted by the marathon sessions that have run late into the night / early into the morning.

“It’s always the same for us,” explains Selak. “We start saying the first day, ‘We’ll come in at 11, finish at 11, have a knock off beer and cruise home.’ And then it moves to ‘Come in at 12. Come in at one, two…’ and then we start coming in at four and leaving at four. So that just kind of slowly evolved across the time.”

“Because we were coming in late,” says Horgan, before changing his mind, “Well not late but like 5 five o’clock in the arvo, six o’clock in the arvo, you’re really at the start of your day at that point. It starts getting dark. So from now on then it always looks the same, even out here [in the lounge room] or wherever. Sam’s a fucking workhorse – he just flies,” he says of producer Sam Johnson.

“We’re lucky with this joint,” chimes in Rozenbergs. “Previous to this we recorded in another facility called Three Phase and since then Sammy and [Holes and Corners co-owner] Adrian Lombardi have opened up this studio and some of the first recordings are coming out now. So it’s really exciting to be with a mate of ours who’s working with us have his own space and I think you can hear that in the recording.”

Later we go into the studio’s control booth where the band will show off a select number of tracks from the new record and Rozenbergs is right – they do sound like a band more comfortable and in their element. The Bennies have always had a reputation for smashing together as many genres as possible into every song they play, but songs on this new record seemingly dive deeper into each new subgenre. The guitar riffs more ’70s rock, the reggae moments more high flying Sublime, and well, they’ve also decided to go all out with experimenting with techno too.

“We’ve got a little bit of everyone’s guilty pleasure,” confesses Rozenbergs. “It’s like the stuff that everyone loves because it’s fucking rude.”

“The rude stuff got a little out of hand,” chuckles Selak.

“There’s rude stuff,” continues Rozenbergs, “where we’re like ‘Oooh, that’s flat out dangerous.’ And keeping that excitement as well is a good thing because we really are lucky to have established ourselves to a certain point in the Australian music identity – even in some forms an international one – but I don’t think we could tell you at the start what this album was going to sound like and sure as fuck any Bennies fan won’t know what’s on this album. But we hope that it’s cohesive enough for them to identify with it because we have gone a bit further out there.”

“With writing this album,” Horgan interjects, “we were so aware of not doing the same genre flips and crosses. It got to the point with some of the writing where we’re like ‘Ok we can’t have another fucking ska verse and a punk chorus or a reggae verse’, so it was funny because the genre flipping thing is quite easy for us to navigate but it was hard for us to try and keep it original. And this recording was the challenge really, because even though we do jump around genres heaps it’s become a safety net for us, so it was cool but frightening trying to break out of that with this recording.”

“Techno is a realm where it has a lot of energy in-built into the genre” explains Rozenbergs. “That was something where we were like fuck, just being students of the style, how can we harness that and put it into our music because we might not be a full rave band but we love a component of that party culture and so how do we access that and how do we learn from those styles. So we’ve really tried to go into some brands of music that we did learn from nuts and bolts. We didn’t know what we were doing and it’s almost made us better musos for it.”

The techno addition might come as a surprise to some fans, but it’s always been an aspiration for the band themselves to explore deeper into the world of dance music.

“They won’t have us at Rainbow,” laments Horgan, speaking about the celebrated Victorian dance music festival Rainbow Serpent. “We’ve tried so much. I don’t know but we’ve always wanted to play there.”

Coming from a punter’s perspective though, it really wouldn’t be a risk for the event’s promoters to take a chance on The Bennies for their festival. After all they’ve proven themselves to be one of the most electrifying live acts in the country, as they’ve endeavoured to play just about anywhere and everywhere they can.

“We’ve got a little bit of everyone’s guilty pleasure. It’s like the stuff that everyone loves, because it’s fucking rude.”

“We started the band at Meredith one year,” Horgan says. “We were watching these bands and we were like ‘Fuck, how good would it be to up on stage at festivals and play music festivals. Good times, great spirits and then we were just like, let’s fucking do it!’ That was the intention to start with. Music festivals was a big, huge aim for us.”

“And any festival,” agrees Rozenbergs. “Any door we tried to open it would be a closer thing to getting up on stage. We believed in ourselves and we knew we could handle it – just give us a shot. That was the hardest thing, getting the opportunity to do it and the whole time we were sitting there like a fucking pressure cooker full of steam waiting to get on stage and release it onto the audience.”

The band have landed some big opportunities since those early days, especially at the start of 2015 when they made a name for themselves as one of the stand out acts on the heavy and alternate music touring behemoth Soundwave.

“There was fucking huge crowds at that thing and every show got bigger and bigger than the one before it,” says Horgan, his eyes sparkling excitedly at the memory.

“Brisbane right at the end was fucked,” recalls Selak with a sense of awe.

“But everyone we spoke to,” continues Horgan, “said it was fucking awesome to see a local band that’s fucking young, fucking killing it. Everyone is so supportive but around that period of time it was such a massive explosion moment for different people getting to know us.”

He’s also speaking of when the band performed what has been regarded as one of the best ‘Like A Version’ cover songs for Triple J around the same time, when they went for the very ballsy option of covering Australian Avant garde rockers TISM’s classic, (He’ll Never Be An) Ol’ Man River. 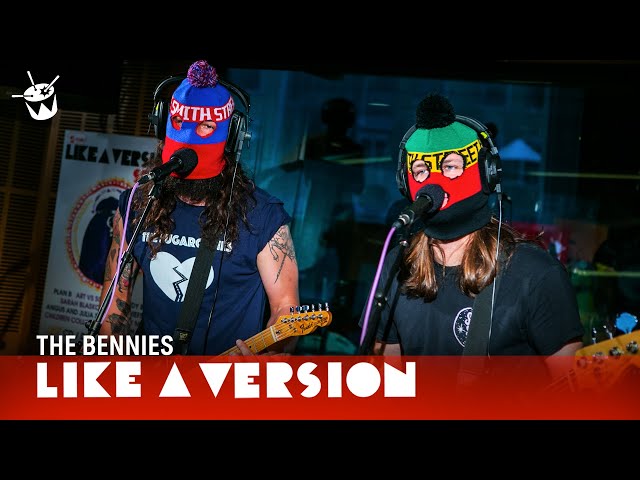 “That was just a huge explosion moment for us,” admits Horgan.

“It is the one thing that still introduces people to our music the most,” adds Selak. “A lot of people will say ‘I only heard of you guys last week when my mate showed me the ‘Like A Version’ and I loved it. And now I’ve checked you out’ sort of thing. It’s still giving and we’re really grateful we got a chance to do it.”

And as more of those chances arise and success continues to mount, the band agree they’re getting a much better perspective on their career as a whole. They also believe that touring with some of their heroes has taught them a lot about surviving and longevity in the music industry.

“Especially NOFX,” says Anty, of the band’s support gig on the California pop punk king’s 2014 Down Under run of shows. “When we toured with them, they were like old and stuff, but they’re doing well and they still shred on stage in a style of music that a lot of bands that – it’s not that popular that style of music anymore. But it was fucking unreal. They rocked it. And they had a fucking really small team of crew with them, like maybe about five other dudes, it was all in house, all lovely people and that kind of inspiration of the personality approach to it over so many years was really inspiring.”

“We’ve had pretty good examples of bands that have a really great template for making something sustainable,” continues Rozenbergs. “Their crew is usually a couple of dudes that are multi skilled, they’re not wasting their cash on rock and roll bullshit. And every beast is different, every band is different, we try to learn where we can or help someone who is doing it well. For us for a long time it’s been the Smith Street model,” he says of fellow Melbourne punks the Smith Street Band who also had a break out year in 2015. “Their productivity as well and how that’s given them a certain level of security in terms of their band unit and I think our band is one of those ones where it can’t think ahead too far, it’s all about us navigating to the next “what do you want to do next?”

So what’s the game plan going forward? Where do The Bennies see themselves in the future?

“I think the main plan is just try to do better than we’ve done before,” Selak says matter-of-factly. “I think if you necessarily shoot for ‘We’ve made it’ that place doesn’t exist and the more bands we tour with the more you realise they’re still trying to ‘make it,’ even though you’ve worshipped them for 15, 20 years. So I think once you forget about that – we always talk about “the long game”. Jules will say “It’s not a sprint it’s a marathon,” so in that vein, for me, I think I’d like to model ourselves on someone like the Rolling Stones. And it’s like fuck – how are those dudes not dead? They’ve partied pretty hard but they’re still rocking.”

“It’s all about the art and becoming legendary,” says Rozenbergs prophetically. “Not just settling for playing once a month down the local pub. That’s great and at every level there’s something that’s going to make you happy, but our thirsts are too large and our lungs are too big for this.”