At a time when most rock bands in search of hits are swiping drum patterns and bass lines from hip-hop and electronic music – take Imagine Dragons’ “Believer” or Muse’s “Dig Down” – few could have predicted that Portugal. The Man‘s unabashedly vintage “Feel It Still,” a mix of Twist-contest surf rock and 1960s crossover soul, would become the biggest song of the group’s career.

Portugal. The Man’s sudden flare-up on the edge of the pop mainstream is the result of more than a decade of rock & roll grind. “They’ve worked really, really hard over the last few years and built an incredible fan base and awareness, sans the record they would need to get to another level,” says Bruce Warren, program director for Philadelphia station WXPN. Portugal. The Man’s unrelenting productivity eventually perked ears at Atlantic Records, which signed the band and helped them gain access to ace producers and co-writers who could help conjure that level-up single.

“So much of that was us going to school,” explains lead singer John Gourley, looking back on the long climb that led Portugal. The Man to “Feel It Still.” “Play 300 shows a year, record all of it and see what works and what doesn’t: That was our 10,000 hours.”

“Feel It Still” now sits at Number One on Billboard‘s Adult Alternative Songs chart, but it hasn’t altered the band’s reality just yet. In early June, the group was still immersed in the usual touring concerns. Bassist Zach Carothers sipped on Robitussin to ward off a raw cough acquired after a week of sleepless nights on the road promoting Woodstock, the group’s new LP. “I’m not even sick,” Carothers joked – “we just like to party.” In the middle of a discombobulating swing from Canada to Houston and then back to New York, the group’s bus broke down between Albany and Toronto, adding to their sleep-deprivation: “A piece-of-shit bus for a piece-of-shit band,” quipped guitarist Eric Howk. 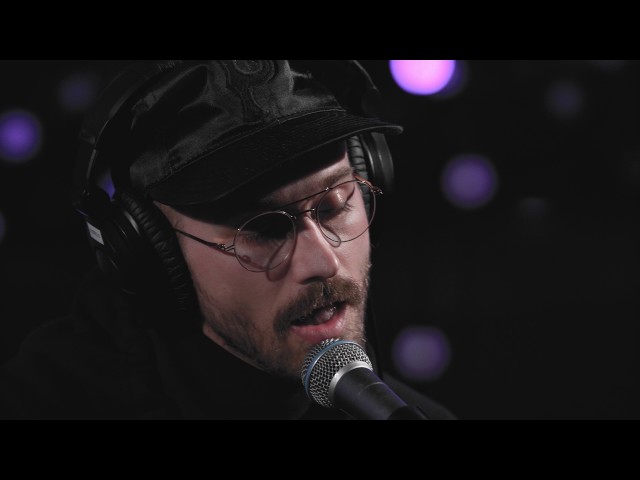 Howk, Carothers and Gourley, who range on the bearded scale from stubble to full-on moustache, were seated in an otherwise nondescript 10th floor corner room in Atlantic’s midtown Manhattan offices. As founding members of the group, Carothers and Gourley did much of the talking; Howk, the most recent addition to the band, acted as color commentator, inserting deadpan quips and quoting rap lyrics from Grandmaster Flash and Kanye West.

Portugal. The Man’s sound – crisp, analog-leaning rock, capped by Gourley’s keening falsetto and cheerful hooks – earned them an Atlantic deal in 2010 after five albums and abruptly upgraded them to sessions with proven hitmakers. In the Mountain in the Cloud, from 2011, was produced by John Hill (Shakira, Rihanna), while 2013’s Evil Friends was overseen by Danger Mouse (U2, Adele).

Luxuriating in the studios of top-flight producers threw the band off their game while they were working on Woodstock – after releasing roughly an album a year from 2006 to 2013, Portugal. The Man took four years to finish their latest LP. “If you send us out to Shangri-La, Rick Rubin’s studio, recording with Mike D and drinking smoothies every morning, we’re not going to want to leave,” Gourley says. “How do you finish that record?”

It took a “dad talk” from Gourley’s father – “Grab your instruments, go into a studio, write some songs, record them, and put ’em out” – to refocus the band. Even more important was the epiphany when Gourley’s dad showed Portugal. The Man his original ticket to Woodstock, recently rescued from the bottom of an old tool box. “The whole festival and movement were so huge to us growing up,” Carothers says. “Seeing the similarities in the political and social climates [between then and now] – people in the streets, artists coming together and finding something to fight against – was a moment of clarity.”

The band decided to name their record in honor of the iconic rock festival, put aside many of the songs they had already written and reunite with former producer John Hill, who is credited on most of Woodstock. Hill also pulled in Ammar Malik, another high-flying pop songwriter (Maroon 5’s “Don’t Wanna Know,” Clean Bandit’s “Rockabye”), to contribute to four tracks.

Nodding to the politically engaged pop values of the Woodstock era, Portugal. The Man’s new batch of tunes referenced “the crazy shit happening in the streets here and around the world.” An encounter with the vestiges of the apartheid system in South Africa plays a role in “Rich Friends,” a potential mass killer seems to prowl through “So Young,” and the ubiquity of untrustworthy news seeped into “Noise Pollution.” “Social media has been used, obviously by our president, to rally the best and the worst of us,” Gourley says. “The entire planet is now a bunch of news anchors, but none of it’s news, it’s all opinion,” adds Carothers. “It’s fucking wild out there.”

“I feel like rock & roll has become very tame. If anybody does it right, it’s hip-hop.” –John Gourley

The band acknowledges that rock is no longer on the front lines of most political battles. “I feel like rock & roll has become very tame,” Gourley says. “If anybody does it right, it’s hip-hop – so many hip-hop shows are punk as fuck. You have something to say? Better start rapping.”

Gourley doesn’t go that far on Woodstock. “The trick is, being a fan of hip-hop, figuring out what’s going to sound honest for a band to do,” Hill explains. Rap rhythm creeps into the laid-back boom-bap soul of “So Young,” and on “Noise Pollution,” a whirring, synthetic tune, Gourley declaims canned-revolutionary manifestos in the dry tone of a street-corner crank.

In contrast, “Feel It Still” sounds shockingly retro, from its interpolation of the Marvelettes to its sub-three-minute length to its lyrical signposts: “I been feeling it since 1966 now.” The track happened “accidentally” while Gourley was playing around with a bass at Hill’s studio. Asa Taccone, the lead singer of the band Electric Guest, wisely urged Gourley to record his groovy exploration. Taccone also contributed a goofy place-holder for a missing bridge – “Is it coming?” – which the band didn’t even bother to change in the final version of the single.

No matter: Warren, always hunting for a stunner to throw into the rotation at WXPN, found “Feel It Still” undeniable. “They’re crafty songwriters, but it’s not always easy to hang your hat on a Portugal. The Man song,” he explains. “We flirted with them in the past but never really threw down.”

That history evaporated with the arrival of “Feel It Still,” which reached more than 9 million listeners via radio last week. “Instantly when we heard that song, I was like, ‘we’re going to play that,'” Warren remembers. “This is the song we’re going to throw down for.”