At 9am this morning, Hilltop Hoods surprised us all by dropping a new single, “Higher” (featuring James Chatburn), the first song from their upcoming Drinking From The Sun, Walking Under Stars Restrung album. As they did in 2007 with The Hard Road: Restrung LP, the trio worked with composer Jamie Messenger and the Adelaide Symphony Orchestra to re-work, re-record and remix a selection of songs from 2012’s Drinking From The Sun and 2014’s Walking Under Stars, but this time added the 20-piece Adelaide Chamber Singles Choir to the equation as well.

The album is due in February, to be followed by an arena tour of Australia in April, at which they’ll perform with each city’s respective symphony orchestra and choir. “There’ll be a bit of added expectation and pressure on these shows for sure,” says MC Pressure. “But they’re gonna be fun and rewarding at the same time too. You don’t get to play with a 30-piece orchestra and a choir every day.”

Here, Pressure and MC Suffa talk about the process of making the record and plans for future albums – if, that is, they survive Pressure’s buck’s night…

You guys like surprises, don’t you…
Suffa: It was originally supposed to be more of a surprise, we were going to just go, “Here’s an album today!” But then real life kicked in.
Pressure: The album didn’t finish itself. Funny how they have a habit of not finishing themselves. So we finished the single.

So where are you actually at with the album?
Suffa: We’re more than halfway through of just bringing it all together, it was more intimidating than we expected.

In what way?
Pressure: In how much there is to do on every song. There are 32 instruments miked individually and there are multiple room mics as well…
Suffa: And then you add in the choir, and then you add in the stems of the original tracks, new elements… some of the songs that we’re mixing have more than 150 tracks, it’s a lot of moving parts. So you sit down and go, where do I start?
Pressure: Then there’s the thing as well that you’re putting so much music into a song that’s already a complete song, so the challenge of figuring out what needed to go from the original tracks, what needed to stay, what was working in the orchestral score; we didn’t use everything that was recorded. A lot has gone into every mix.

When did you start working on this idea?
Pressure: Since we did Hard Road: Restrung we’ve always had the intent to go back and do another one, do it bigger and better. Pretty much since Drinking From The Sun came out we thought we’d do some of that album, and it ended up being about half of Drinking From The Sun and the other half from Walking Under Stars.
Suffa: Jamie [Messenger]’s been working on the compositions since we dropped Walking Under Stars, so 18 months he’s been working on the actual compositions and we’ve been going back and forth.
Pressure: We had a lot more back and forth this time than the previous time we did a “restrung”. We had a lot more input musically into what went into it this time round.

What was the criteria for which songs you chose to re-string?
Suffa: We chose both the title tracks, we chose all the singles off both albums, and on top of that tracks that really made the albums, like “Through The Dark” from Walking Under Stars.
Pressure: I guess a lot of it was not just our favourite songs but the ones that resonated the most with our listeners as well. You get a good sense after an album’s been out for a year what people are really liking.

How did your initial conversations with Jamie go?
Pressure: I think we ended up breaking down all the tracks, we gave him notes and said we want this track to be dark and moody, we want this track to be uptempo so we want some harder playing on this one, lots of orchestral stabs, we gave him notes. I think one of the songs we instructed him to make it sound like a horror film, “Rattling The Keys To The Kingdom”…
Suffa: And with songs like “Speaking In Tongues” we were like, this doesn’t lend itself to being an orchestral piece, you’ve got to make this song moodier, because at the moment it’s a funk song, it’s a funk break, and to make it fit in with everything else you’ve got to make it moodier.
Pressure: We changed the fundamental sound of some of the songs.

Could you see yourself doing an entire album from scratch with an orchestra, rather than reworking old songs?
Pressure: No.
Suffa: [This has] been so hard! [Laughs] It will probably be the last time we do it too.
Pressure: We will never do this again.
Suffa: There will never be another Hoods album with “Restrung” on the end of the title again! Not that we haven’t loved it and it’s been a great adventure and we’re so happy with so much of the music, but it’s just a big endeavour.

So has there been time to think about your next album of all-new original material?
Suffa: We’re always writing to a degree, but to be honest, I want a break after this, cos we’ve just been touring and recording constantly for five years. I’m talking a few months [off]. We’re going to do a remix EP for this like we did with the other two albums [Walking Under Stars and Drinking From The Sun], and we’re bringing out a Golden Era mixtape next year as we do every year, so at the end of this five years that’s three albums, three remix EPs, and five Golden Era mixtapes, three national tours, a bunch of international touring… I just need a bit of sleep [laughs].
Pressure: It’s been an intense five years.
Suffa: And that doesn’t even count the outside collaborations. We’ve produced for other people, just did a track with Gin Wigmore, and on top of that real life things happen that aren’t music.

Such as?
Suffa: He’s getting married in February, we’ve got his buck’s next weekend!
Pressure: They’re gonna try and kill me. I’m terrified. He’s got an ambulance guy on call for my buck’s night! What are you gonna do to me?!
Suffa: It’s just a precaution! 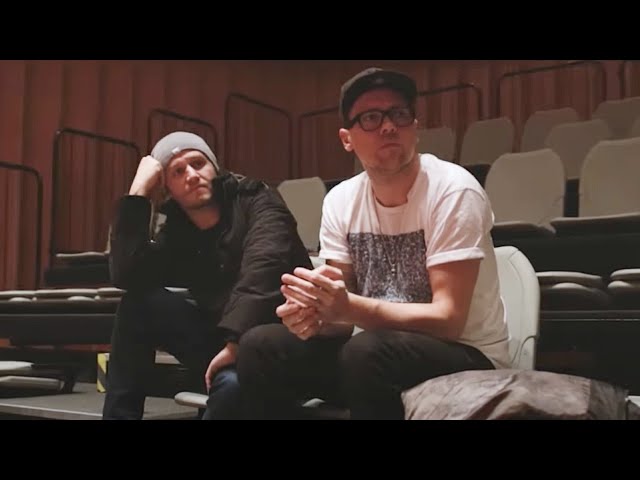