Though Grouplove‘s third album Big Mess bursts with joyous, anthemic hooks, its creation was fraught with change and confusion. Vocalist and keyboardist Hannah Hooper explains that it started when Grouplove wrapped up a nonstop tour for their last album, 2013’s Spreading Rumours, and returned to L.A. to find their home in shambles.

“Our house looked legitimately like squatters lived there because we hadn’t been home in so long,” she says. “There was mail piled up everywhere.” Simultaneously, Hooper was newly pregnant and was preparing to raise her first child alongside her husband, Grouplove guitarist and vocalist Christian Zucconi.

But for the first time, there was no rush for the five-piece to deliver an album or pack up to perform in another part of the world. The band took real time off, with no deadline in mind. When they eventually came back together, they set out just to write songs for songs’ sake.

Grouplove also brought an outside perspective into the fold for the first time, producer Phil Ek (Modest Mouse, Built to Spill) and went up to Seattle to record part of the album with him. They tightened up the rest of Big Mess in Los Angeles with Grouplove drummer Ryan Rabin, who also moonlights as their producer. The time away paid off, because Grouplove has returned with their most polished and cohesive work yet. Hooper and Zucconi chatted with Rolling Stone to talk about the joys of chaos.

The title of Big Mess sounds like a pretty literal approximation of the time you recorded this album. Do you usually work under chaotic circumstances?
Hannah Hooper: Probably not at this level. I feel like when you’re in high school and college you’re pretty self-involved. When you step away from that, especially when you’re bringing a child into this world, just looking out into your neighbourhood and your little introverted world and starting to realize that regardless of how hectic your direct world is, the world is pretty intense. We were feeling it on a pretty crazy level. I think it’s inspiring.

Lyrically, even our single that is out right now, “Welcome to Your Life,” it is a joyful, straightforward pop song for sure. But the verses really are about how messed up and difficult this world can be, and about the challenging part of life, like bringing a daughter into this world and how scary that is for us. But now we’re parents and leaders and all this stuff. The choruses are like … this can be your fantasy. It’s still a beautiful life. There’s always going to be hard times, but we can approach it with a softer edge.

On “Enlighten Me,” one of the lyrics goes, “Let’s call it quits and see what the future holds.” Do you ever entertain the idea of no longer performing music?
Christian Zucconi: Definitely. As much as it’s amazing and awesome there’s times you want to stop it all and invent a new chapter in your life, do something completely different. At that time, we were getting home after being on the road for so long, knowing we were going to raise a child. … It was fun to fantasise about what else we could do. I think you have to go there sometimes to appreciate what you have. Not necessarily Grouplove, but that idea of whatever you’re doing, you think about wanting to flip it upside down, take that risk, do something completely else and surprise yourself and see what happens, you know?

One of the most surprising things about your evolution as a band is that you all met at an artist residency in Crete.
Hooper: I mean, it’s still, to this day, the trippiest story because it sounds like a script for a Disney movie almost. It sounds like such bullshit. The fact that Christian and I were just busting our asses in New York and not getting anywhere, and then took this leap of faith — first of all, with each other. Not knowing each other, and going to Greece of all places, and end up meeting all these cool kids and starting a band? Not even starting a band. It was us recording music for fun.

I absolutely never wanted to be in a band. I never imagined it. Spent our first 15 shows with a mask on. I think the craziest thing about this band is that since it started from such an honest, genuine place without kind of an artist statement, in a sense, just being us and not trying to be a band, the most honest thing we’ve done in our lives is working. And people are responding to it, I think, because it’s not some fantastical thing. When we’re onstage, we’re that part of ourselves that we’re growing into. And the joy of being in this band is that we’re just getting to know ourselves and there’s no bullshit. 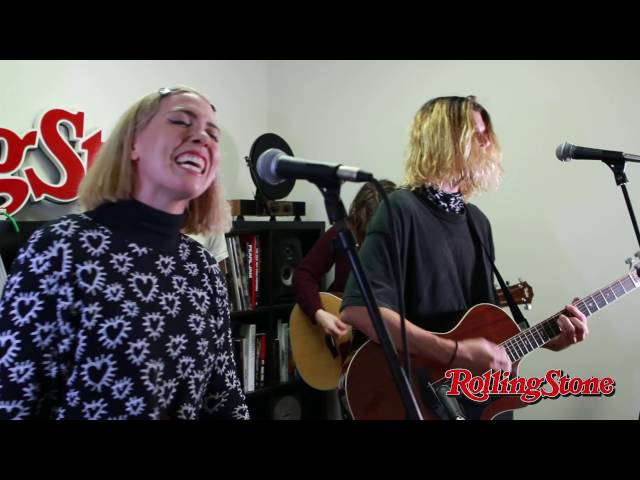 How does it feel to listen to the album?
Hooper: I can’t really speak about listening to it because the truth is, since we’ve mastered it, I’ve only listened to it once. Because part of me, as someone who is constantly developing, is that I want to add another song. Don’t get me wrong, so excited about this. But what I’m really excited about is performing it. We’ve been rehearsing the songs and there’s something about our band live that to me feels bigger, and more anthemic, and more important, and the songs … the meaning just glows, you know what I mean?

I’ve been reading a lot of biographies about bands and I’m noticing a recurring theme of “fuck the recorded album, it’s our live show that’s great!” I’m reading [Carrie Brownstein’s] Hunger Makes Me a Modern Girl. It’s so fucking good. To have her voice is so refreshing. Then I read Kim Gordon’s Girl in a Band. Girls in bands! It’s fucking awesome when girls are tough and unique and strong and kind of androgynous and still feminine.

I’m in a pop band, basically. I’m in a genre and people look up to me and I’m like … “How the fuck did this happen?” This is amazing. I don’t know if people out there know that I’m weird because we get generalised as this happy, Southern California pop band. But we really aren’t that way. So it’s exciting to get those kinds of kids who wouldn’t necessarily get to know a woman like me. And it’s like, ‘Guess what!’ Now that you’re at the show, get to know me. I’m an aggressive, powerful woman. I am a voice that I want to be out there.