The Griswolds’ frontman Chris Whitehall answers the phone in L.A., where he’s in the middle of overseeing the mixes for the band’s second album, High Times For Low Lives (out November 11th). The follow-up to 2014’s Be Impressive, it comes off the back of a touring schedule that saw the Sydney quartet perform more than 300 shows, largely in America where they supported acts such as Walk the Moon. When it came time to record their follow-up, they received assistance from producer Andrew Dawson, best known for working with Kanye West, Beyonce, fun. and Sleigh Bells. The band spent three and a half months in Dawson’s studio fine-tuning the record, a contrast to the six weeks they spent on their debut. “This one’s been a lot longer process,” says Whitehall. “It’s been good, but a lot longer.”

What did that extra time allow you to do in the studio?
Just get really creative and experimental. You could literally spend two days trying to get a sound right, and having those crazy arguments between band members and the producer, but good arguments. Pushing the creativity to its absolute boundaries and then trying to break those boundaries to get a sound that you haven’t really heard before. This [album] sounds nothing like what you think the Griswolds [are]. Forget everything you thought you ever knew about the band.

So this is you resetting the dial on who you are as a band?
When me and Dan [Duque-Perez, guitar] went into writing late last year, we went off into the wilderness, and we didn’t have any set kind of intention at that point. But when we started writing it was just kind of like, “Let’s set fire to the fucking rule book. Just because we’re a band with two guitars, bass, drums and a keyboard, we don’t have to be a rock band, we can do whatever we want, have whatever sound we want. Let’s be bold and be brave, and let’s try and do something other bands are not doing. Let’s try and come up with a sound and an influence that bands just aren’t touching on, and people are too scared to almost do.” That’s what we really set out to do in making this album.

Is there a song in particular that you think messes with people’s expectations of the Griswolds?
There’s a song called “Birthday”, and it was the first song that me and Dan wrote and finished on the album. It sounds like if Prince and the Weeknd had a baby. We’re kind of hoping it becomes the new birthday song instead of “Happy Birthday”. When I came up with the lyrics, I was thinking about this mundane life [where] we work all week to try and make a difference, but you get that one day of the year where you can just celebrate your arse off. And I was so worried about showing Dan. I was like, oh my god, these lyrics are literally about happy birthday, but it worked out all right. It’s a very kind of r&b-heavy song, the producer even used the exact synth sound from Michael Jackson’s “Beat It”.

When you say you and Dan went into the wilderness, are you speaking metaphorically?
No, we went about two hours north of Sydney to a farm with about 22 acres, up in the mountains. There was literally no internet, the closest place to do your groceries was a one-hour drive, we just locked ourselves up in this farmhouse and there was nothing to do other than create. There was a mountain behind the house, and whenever we needed to do a phone call or catch up on the business side of things or get on the internet, you’d have to climb this mountain, which was about a 40 minute hike. You’d finally get to the top and get some reception. I had a Skype call with our manager planned, and as I was walking up the mountain there was a red bellied black snake. I froze, the snake froze, we were both looking at each other going “Shit!” It was a pretty intense way to do business.

You did about 300 shows in support of Be Impressive. Can you hear that road work in the album?
It’s so within us now you’d definitely hear it on the record. That many shows and being in a band together, even the four of us as brothers, you hear that. You can hear the loss and also what we’ve gained on the road, the amount of things we’ve learned.

Did the road work play a part in determining the direction? Were you trying to do more of what works well live?
No. I’d say the opposite. We’ve literally taken the live element out of it and tried to write the best songs we could without thinking about how they’d go live. That was our setting fire to the rulebook thing. Getting it out of our head that we have to play it live this way, we have to be a band with drums and guitars. We went, “No, let’s let the songs be the boss and we’ll just be the slave to writing the best songs that we can and then we’ll figure out how they’re going to go live.” 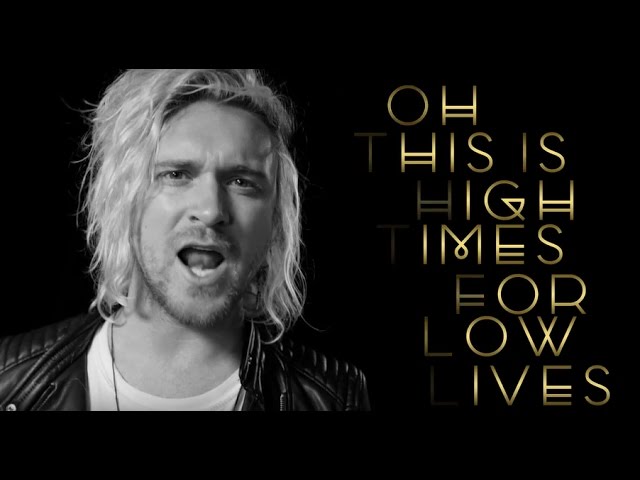 Why did you choose to work with Andrew Dawson?
We had an amazing experience working with [producer] Tony [Hoffer] on the first album. But we wanted to branch out and break free of that indie band sound, so we decided to go with a hip-hop producer. So we started looking around, and Andrew found out about us looking for a hip-hop producer, and he came to us. He’d heard the demos and was like, “I have to be on this project. I need this, I’ll do anything, I’ll cut my price in half.” Once the album was done he said, “This is the best thing I’ve ever worked on.” He fell in love with it.

What role did he play in the finish product?
He was the perfect person for the job. His creativity, it’s almost like ADD. He goes off on these creative tangents – you’re trying to talk to him and he doesn’t even listen. He’s focused, he’s right on the computer screen with his keyboard and he’ll just sit there and experiment and try everything out. He’s off in another planet, but that’s become such a key thing for the album. His personal creativity and what he could add sound wise was insane, beyond what we could ever have believed for the album.

This is an expanded version of an article from issue #780 (November 2016), available now.