There’s this place. Tucked somewhere between the remaining tapas dispensaries of Liverpool Street’s fading Spanish Quarter. Down in an underground cellar, a retired restaurant, where your phone doesn’t work but your dancing shoes definitely do. A place that on one night you can see Thom Yorke sport a sexy ponytail and try to DJ and the next night show off your extensive knowledge of How I Met Your Mother at a specialised trivia challenge where, between rounds, you can dip into the backroom to see a bunch of scruffy punks play their first ever show. On that same stage, the very next evening, an international star or an underground record-spinner will host a rave playing obscure tropical-spage-age white labels that were only pressed earlier than afternoon.

Sydney’s Goodgod Small Club embraces eclecticism. Hell, one night they even let me play Lil B songs back-to-back for an entire hour. And within a city that has only become more conservative in recent years, founders Jimmy Sing and Hana Shimada have formed a space focused not just on housing, but encouraging, the creative risk-takers of Sydney. Throwing caution to oncoming cyclones (read: those draconian lock-out laws) and constantly looking for the next new and exciting avenue to explore.

But, after five years of parties, in September Sing and Shimada announced they’d made the “difficult decision” to close down the iconic nightspot. Thankfully, new owners, the Esperance Hotel Group, have already confirmed they’ll “continue working to present some of the most talented national and international acts”, when they take on December 16th, under new name, Plan B Small Club.

But Goodgod, as Sydneysiders know it, will cease this week. In predictable fashion, however, they’ve chosen to end their tenure with a packed schedule of “last dances”, featuring a parade of performances from the club’s extended family — including Twerps, Straight Arrows, Bed Wettin’ Bad Boys, Astral People, Pelvis, Fester, Noise in My Head, Future Classic, Ariane and many many more.

We recently caught up with Jimmy Sing to discuss why they’ve decided to hand over the reigns, the mark they’ve left and how it all began.

Can you explain how Goodgod came about, specifically how it transitioned from an occasional event at the back-room of a Spanish restaurant (La Campana) to taking over the entire venue and making it into a bar, restaurant and venue?

Jimmy Sing: Goodgod started as an amorphous vehicle for myself and Hana to be creative – we were looking at it as a record label, book publisher, host of pro-wrestling appreciation nights and then running it as a party. We never set out to start a venue, it was really organic the way it came about. Goodgod Small Club was the name of that monthly party, based on an excitement to bring together all our friends who played in bands and didn’t really go out dancing, with all our other crowd of clubbers who were only dancing to club records. It had membership cards and a utilitarian dance wear dress code of blue jeans and white tees. And it was based in the room out the back of a Spanish cabaret restaurant which is now our Danceteria. I brought in a lot of friends to do their parties there to such as Jingle Jangle with Dave Abrams from Freda’s and Tall Mikey, Midnight Juggernauts to do Siberia Nights, Cut Copy to do Cutters parties, the Canyons guys did parties for their label Hole In The Sky. And we hosted bands like Eddy Current Suppression Ring and Pond.

The Spanish restaurant went bust and we were evicted alongside them, so we dreamt seriously of doing the full space as a venue. The basement has a 24 hour license and we knew there were no sound complaints. So, five and a half years ago we borrowed a whole bunch of money, got our friends on board and signed up for the lease and license with a hell of a lot of naivety and crazed enthusiasm. It’s constantly evolved since then, both to make it fun and viable. One of the greatest additions was our friends Levins and his wife Bianca deciding to start their first restaurant with us called The Dip, which was one of the first spots for American food in town. That created the holy trinity of food, drink and dancing.

In your initial announcement of Goodgod’s closure, you made a point of saying it wasn’t caused by the recent nightlife regulatory changes to the lockouts laws in Sydney. What effect do you think have those restrictions had on the way you and Hana ran Goodgod?

The lockouts were such a heavy discouragement to actually attempt to create a great nightlife in Sydney. There’s a lot of financial, let alone emotional, investment you put into running a music venue and you need to do so with some long term vision. With an announcement like the lockout and early closure laws, there was no consultation, no consideration that an individual business like ours — and many others — could provide a place for people to happily come together without any violent incidents, and could perhaps be part of the solution to the alcohol related violence we all want to see end. And the effect was the laws made a hell of a year for us last year. Of course it slashed our financial investment in a 24hr license.

But the freaky thing was when all the punters in Sydney pretty much wholesale migrated to Newtown and Marrickville to get away from the inconvenience of 1:30am lockouts, meaning that our location in the middle of the CBD was a burden! We came close to losing it all but were able to make a bunch of changes — and along with encouragement of support from the music community — we got the place back on track to have a great last 12 months. We started doing bigger ‘destination’ events rather than many, smaller events which has slightly changed our programming. And we’ve putter a bigger emphasis on the early food hours rather than the eternal dancefloor hours. We found a way with a lot of help from the Goodgod community and that’s why we feel it’s crucial that people know that it’s not the lockouts that made us want to move on. The lockouts need to end, but people should not be discouraged from creating incredible nightlife options right now.

So, the decision to shut up shop was more of a personal desire to move on to something new?

Yes, myself and Hana are partners in life and business so it’s been all immersive for the last 7-or-so years in this space. It just became time to look to switch it up, enjoy more daylight hours etc.

With Goodgod now passing over the reigns to Plan B Small Club, what can you tell us about them? Do you have an idea on how much will change?

They’re continuing to run the spot as a live music venue and nightclub – which I’m stoked on. This building has been a dancefloor since the late 60’s so I think it’s great that people will still be able to enjoy it in that way.

What do you think you’ll miss the most about running a venue?

The people! A venue is nothing without humans being excited to be around one another. We’ve met the best people in our lives down here and being through a lot together, so having the weekly spot to see one another without having to plan it is an absolute luxury that I’ll miss forever. 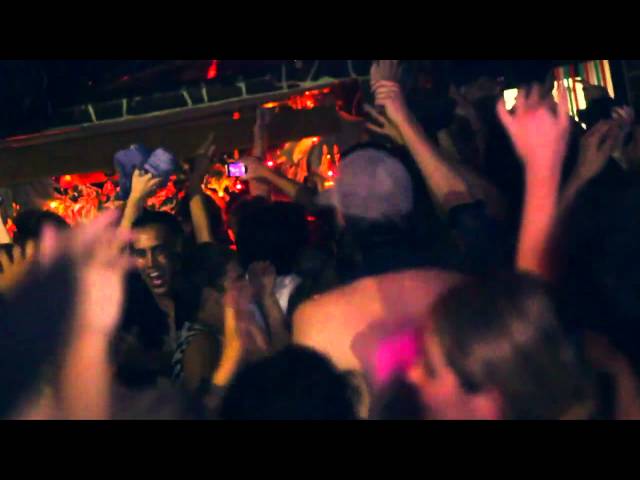 I noticed amidst the final Goodgod gig listings you mention “please stay tuned for GG’s next incarnations in the new year”. Any clues as what’s next for you and Hana?

As we talked about, Goodgod was never intended to be only a venue, so we’re returning to that idea. We’ve loved doing bigger stage productions at Sydney Opera House’s Vivid Live, and we still love re-inventing spaces so we’ll figure out what that looks like in the new year. Trust me, we’re putting running venues to the side for now!

Details of the final week of Goodgod shows available here.