From Gang of Youths’ award haul to the Malcolm Young and Daryl Braithwaite tributes, from forward-thinking social messages to the limitations of an outdated media format, we collect our takeaways from the (economically condensed for TV) 2017 ARIA Awards.

Gang of Youths‘ faultless second LP, Go Farther In Lightness, was the deserved dominator on the night, picking up the prizes for Best Group, Best Rock Album and Best Album. Better still, frontman David Le’aupepe delivered some of the most powerful acceptance speeches in ARIA Award memory where – alongside praising the other nominees (A.B. Original for “making an incendiary, important record for the brown boys”) – he utilised the spotlight moment to share his own views on current social issues, saying that “we’re all immigrants to this country, every single one of us. This country was built on a strong Indigenous people and on the backs of immigrants.”

The Legend That Is Braithwaite

Daryl Braithwaite’s deserved induction to the Hall of Fame was followed by a stirring sing-a-long of “Horses”, with the veteran rocker joined on stage by Guy Sebastian and Vera Blue. Before which, Jimmy Barnes delivered a touching — and humorous — introductory speech, recalling the first time he played with Sherbet. “So suddenly from standing there with my jaw open I was in the back of an armoured van with Sherbet,” Barnes recalled. “This was the peak of their career and Daryl took me into the van and shared it with me. I remember driving away and there were girls throwing themselves in front of the van. They were going nuts. That day, Daryl Braithwaite gave me a glimpse of what it was like to be a rock star. He shared his moment with me, and I was a nobody. I was a nobody… and he shared it with me. That’s the sort of guy that Daryl Braithwaite is.”

Good set changes, good sound and the best breadth of Aussie talent in years, the live performances on the night were a clear standout. Along with sets from international pop-stars Lorde and Harry Styles, all the locals leading the noms got their spotlight moment too, with Paul Kelly’s updated rendition of “Dumb Things”, featuring A.B. Original and Dan Sultan, a definite highlight.

Once more, progressive politics featured prominently throughout the night, with Harry Styles praising Australia’s recent marriage equality plebiscite vote result and a number of presenters and award winners respectively paying tribute to the traditional owners of the land. Similarly, Triple J’s decision this week to change the date of the Hottest 100 countdown from January 26th was a hot topic throughout the night, with Dan Sultan saying before the ceremony that the day “commemorates the beginning of the ongoing genocide of our people.” While A.B. Original’s Briggs went equally direct, saying “Australia Day is trash. It’s 14 years old. We’ve got 80,000 years of history here.”

Kasey Chambers is Still The Most Natural Personality in The Country

When called as the winner in the Best Country Album category for Dragonfly, Kasey Chambers‘ bounded up to the podium with a big smile, a few apologies for her disorganised stage entry and her signature no-bullshit attitude. “There’s a lot of negative stuff said about being a woman in the industry over 40 years old,” she said during her acceptance speech, “but I fucking love it!” Later on when presenting the award for Best Male Artist, Chambers joked she was “going to read his name out anyway”, before announcing Paul Kelly as the winner.

A Bleeping Good Time Was Had By All

And it wasn’t just Chambers gettin’ blue! The ceremony was arguably the sweariest for some time with Gang of Youths’ David Le’aupepe and Peking Duk both dropping some curse words in their acceptance speeches. No complaints here, aside from the way the profanities were handled in the television broadcast, with the harsh edits quickly switching focus from poignancy to laughter which, without the context of it being a required cut, made little sense for those watching along at home.

Not Made For TV

In addition to those hard slicin’ edits and despite getting it down to a manageable two and half hours, the television coverage remains more miss than hit. On top of the parade of stale scripts, tele-prompt-reading elongated pauses and forced presenter pairings, there was host Richard Wilkins’ cheesy one-liners – describing Peking Duk’s live performances as “tasty” (really?). Furthermore, while we note it would be a logistical nightmare to even contemplate running it as a live event, again live social media sharing from everyone (including us) ruined any surprise with the television coverage.

Malcolm Young Gets a Fitting Tribute

Following on from Malcolm Young’s funeral which was held earlier in the day, Jimmy Barnes (who looks bloody good in a kilt, btw) led an all-star rock troupe in a performance of “High Voltage”, in tribute to the AC/DC guitarist, who passed away earlier this month. Earlier in the evening, organisers blasted Back in Black ahead of the ceremony commencing. 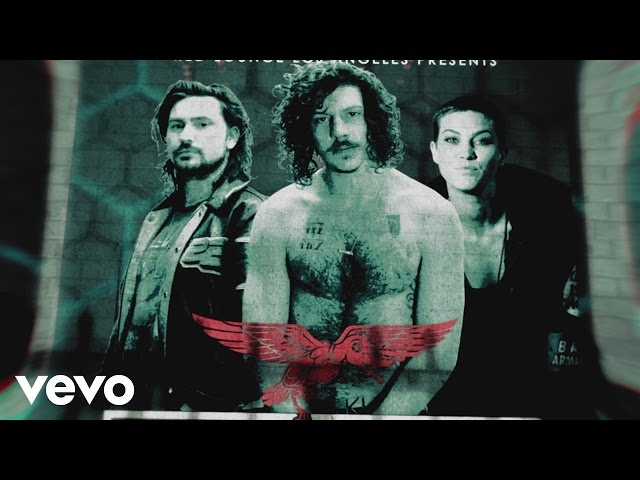 Traditionally, the ARIAs have climaxed with arguably the most prestigious award, Album of the Year. Not anymore. This year’s ceremony concluded with Peking Duk taking out the Song of the Year for “Stranger”, suggesting a shift in focus from LPs to singles for the music-buying public. Is this the beginning of the end for the long-player? Well, as long as groups are churning out opus’ like Go Farther In Lightness, we think there’s little threat.