The past decade has been rough on Bill Stevenson. Descendents’ hulking drummer and frequent songwriter almost died from a series of health problems and also faced upheaval in his personal life. As he discusses the band’s first album in 12 years, Hypercaffium Spazzinate, which finds him working through some of his darkest feelings from this period, Stevenson fights back tears. “I’d hope to think of this as the documentation of the end of a pretty bad era for me,” he says. “Very rough on my family and my wife, my children, my health … I think we’re doing OK now, so maybe it’s the end.”

Sitting around a conference table at Rolling Stone‘s offices with Milo Aukerman, Stephen Egerton and Karl Alvarez – his bandmates for three decades – Stevenson addressed “Without Love” and “Spineless and Scarlet Red,” two songs he penned for the upcoming album that chronicle marital strife with painful rawness. These tracks, the latest in a long line of hook-y, heartrending Stevenson efforts dating back to Descendents’ early-Eighties formative years, fly directly in the face of the band’s reputation as the most playful group to emerge from the first-wave SoCal hardcore scene. The band reckoned with the ageing process on its prior two albums, 1996’s Everything Sucks and 2004’s Cool to Be You. But Hypercaffium Spazzinate – out July 29th and titled after Aukerman’s dream of a “better, more potent version of caffeine,” a nod to Descendents’ well-documented coffee obsession – finds a group that once pledged “Thou shalt not commit adulthood” delving ever deeper into the trials, and rewards, of middle age.

A stick-figure-like sketch of frontman Milo Aukerman has adorned the majority of Descendents’ album covers.

For many, the image most closely associated with Descendents is a goofy adolescent doodle: two high-school classmates’ stick-figure-like sketch of frontman Aukerman that has adorned the majority of the group’s album covers, including Hypercaffium. The sentiment behind the band’s 1985 album title I Don’t Want to Grow Up has always been an integral part of their aesthetic. Co-founded in Manhattan Beach, California, in 1977 by Frank Navetta, Descendents shuffled members for a few years before settling on the early core lineup of Navetta, Stevenson, Aukerman and bassist Tony Lombardo. This quartet would produce timeless songs both silly (the 10-second “Weinerschnitzel,” essentially a fast-food order set to disjointed staccato rhythms) and sublime (“Hope,” punk’s quintessential unrequited-love anthem and a highlight of the band’s masterful 1982 debut LP, Milo Goes to College), in the process mapping the blueprint for Nineties pop-punk megabands like Green Day and Blink-182.

The band’s current lineup of Aukerman, Stevenson, guitarist Egerton and bassist Alvarez cohered in late 1986, following the drummer’s two-year stint playing with SST labelmates Black Flag. By this stage, documented on 1987’s All LP, no genre tag, hyphenated or otherwise, could comfortably contain Descendents’ musical vision. Here was a band as adept at instrumental proto-math-rock as it was heart-on-sleeve indie-pop in the vein of contemporaries and onetime SST-ers Hüsker Dü.

Descendents parted ways in 1987, with Aukerman transitioning to a career in biochemistry and the other three carrying on under the name All with a series of different singers. Eight years and six All albums later, Aukerman contacted Stevenson to say that he “wanted back in the action” and even had new songs ready to go. The singer reunited with Stevenson, Egerton and Alvarez on 1996’s Everything Sucks, and Descendents have performed and recorded sporadically ever since. Filmage, an excellent, comprehensive 2013 documentary, surveyed the lengthy saga of both Descendents and All.

During Descendents’ June visit to RS, it quickly became apparent that the band is much more than an escapist outlet for these four men in their early fifties. “I think there’s quite a bit on the record that’s kind of unflinchingly looking at getting older,” the heavily tattooed, gruff-voiced Alvarez says of Hypercaffium. “And it’s nice because I think a lot of rock bands aren’t very honest about that; they all want to exist in some universe where they’re perpetually between the ages of 21 and 35. We’re codgers; we’re not afraid to admit it.” 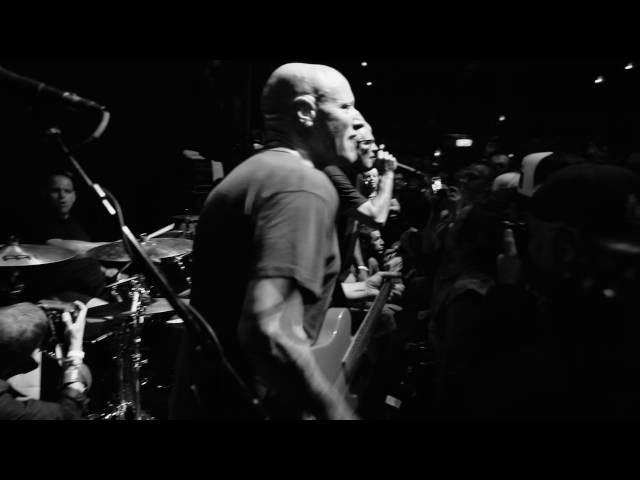 Health-wise, the years between Cool to Be You and the new album were harrowing ones for the group. Alvarez suffered a heart attack in 2007, and Stevenson endured a brain tumour followed by a pulmonary embolism in 2009 and 2010. Hypercaffium Spazzinate, accordingly, takes on a number of decidedly adult topics. Various songs deal with everything from infidelity (the aforementioned “Spineless and Scarlet Red”) to mourning (“Feel This,” inspired by the death of Alvarez’s mother), child ADHD meds (the Aukerman-penned “Limiter,” which takes the form of an anguished apology from the singer to his son) and skyrocketing cholesterol (“No Fat Burger,” which recasts the band’s 1981 junk-food paean “I Like Food” as a cautionary tale).

“At one point, it just dawned on me, like, ‘Yeah, I still want to sing “I Like Food” and think about all those great things I’m gonna eat,'” says the friendly, self-deprecating Aukerman, still sporting his trademark glasses, of “No Fat Burger.” “And then it’s like, ‘Yeah, my doctor’s gonna kill me,’ you know?”

“Don’t let him tell you what to do, dude!” Stevenson counters.

The quartet’s chemistry is as evident on the new record as it is in the room. The group had the luxury of taking its time writing and recording Hypercaffium; the album was tracked last year at the Blasting Room in Fort Collins, Colorado – which Stevenson co-owns – and the respective home studios of Stevenson, Egerton and Aukerman, but demos began circulating among the members as early as 2011. As a result, the record contains some of the band’s tightest, most energized studio performances to date, from classic-sounding melodic-punk anthems like “Victim of Me” to time-signature-juggling prog-in-miniature workouts such as “Human Being.” Across the album’s 16 tracks (and another five on a bonus EP, Spazz Hazard), Aukerman’s gritty yet tuneful vocals soar over Egerton’s snarling riffs, Alvarez’s agile bass lines and Stevenson’s hyperactive drumming.

Their hard-won group dynamic isn’t something the band members take for granted. “Not only has everyone been in the position to improve themselves,” says Egerton, an incendiary guitarist and radically inventive songwriter but the quietest Descendent in person. “There is also the building upon each other’s improvements that is inevitable to a group of people playing together – especially for this particular four people – 30 years.”

“My band members were my first friends.” –Bill Stevenson

Thanks in part to Filmage, this shared history is now at the forefront anytime Descendents convene. But on Hypercaffium, Stevenson pays explicit tribute to their legacy via perhaps the most poignant love song in a catalog filled with them: “Beyond the Music,” which takes as its subject the band itself and the thicker-than-blood bond that has developed between its members. “Here we are today,” Aukerman sings. “Still look each other in the face/Not expecting a single thing beyond the music.”

When asked what inspired him to put that sentiment into a song, Stevenson invokes the band’s earliest days. “We got into the band for the right reasons in the beginning, just music for the sake of music, for the love of it,” the drummer explains. “And what we found shortly thereafter was that it really was about way more than that. It was about this camaraderie. In my case, my band members were my first friends. … I wasn’t able to fit in, in junior high and high school, and with my family being kind of disjointed … I also found a substitute family. To celebrate that thing, which is the most important thing ever in my life, it just seemed like it was nice to do that.”

Stevenson gestures around the table at his three musical soulmates. “I’ve been just so happy to still have this.”