Dave Hosking is the first to emerge from Boy & Bear’s rehearsal room, all bed hair and big smiles as he strides down the rehearsal complex’s poster-clad hallway. Guitarist Killian Gavin isn’t far behind, dressed casually in jeans and a grey pullover. The studio in Sydney’s inner-west at which the band rehearse is, today, doing a booming business, as Lee Kernaghan (unrecognisable without his trademark hat) strolls past and strains of Led Zeppelin’s biggest hits waft through the air as a tribute band go through their paces in one of its myriad rooms. In an hour’s time, Gang of Youths’ hulking black tour bus will pull up out front, depositing more gear and bodies into what is clearly a very familiar place for many of the country’s musicians.

It wasn’t that long ago that Boy & Bear called a tour bus home as they traversed America’s highways on one of three U.S. tours they conducted in 2014. In October the Sydney quintet found themselves in a fully kitted-out house on wheels with bunks, a kitchen and living quarters. In some ways it represented the progress the group had made in America – at the beginning of the year they’d embarked on what would be the busiest touring period of their career (170 gigs in 12 months) with a punishing jaunt around the States in only a 12-seater van into which they crammed themselves, their gear and their crew. Each night after a show they’d hit the road, driving until the early hours of the morning, when they’d pull into a hotel and grab a few hours’ sleep before heading off to the next town. Repeat for three weeks.

“It’s almost like we did the whole touring year back to front,” recalls Gavin, taking a seat on the lip of the stage in the group’s rehearsal room as the other members of the band – drummer Tim Hart, keyboardist Jon Hart and bassist David Symes – head out to grab some lunch. “We did the hardest tour at the very start, which doesn’t set you up very well to take on the rest of the year.”

On the upside, of the “25 or 30” shows on that initial run, almost all were sold out. Their first ever visit to Canada saw them playing to 1,200 people in Vancouver and Toronto. “It was so bizarre, just out of nowhere,” says Hosking.

When the touring concluded in Paris last December, the singer says they “were wiped out. We were living, breathing zombies.” He estimates it took until February for some normalcy to creep back into their lives, and it wasn’t until March that the band reconvened for a writing trip to Berry on the New South Wales south coast, the first of four such trips they took to pen their new album, Limit of Love, the follow-up to 2013’s Harlequin Dream. “It was baby steps,” says Gavin, “cos there was a lot of hesitation after last year and how big it was. Getting back in the same room as everybody, as much as you love everyone, took a lot of willpower and emotional effort.”

On one of those writing trips, Hosking – traditionally the band’s sole songwriter – was late to arrive, so the band started jamming without him. By the time he turned up they’d come up with the bones of what would become the album’s first single, “Walk the Wire”. With its Eighties synths and uptempo ruminations on boy meets girl relationships, it marks something of a departure for the quintet, and is one of three songs on the album written collaboratively, a first for the group. The result, says Hosking, is an album that “feels less introspective, broader, like there’s more personality”.

“We’d tried [collaborating] in the past and it hadn’t been as successful,” he says, “and it felt like we’re [now] operating at a different level of communication.”

The day before they flew home from London in December, they met producer Ethan Johns (son of the legendary Glyn), whose credits include albums by Ryan Adams, Paul McCartney and Crowded House. After establishing the main reason for meeting – “He said, ‘Look, to be honest I just came here to make sure you guys weren’t dickheads’,” cackles Gavin. “And we said, ‘We did too!'” – they made plans to reconvene at Real World Studios in the south of England in May to record album number three live to tape. When they arrived, Johns had a surprise in store: “When we were setting up,” says Hosking, “he said, ‘I think it’d be great if we keep this 24-track.'” [Each song could have 24 tracks of instrumentation; by way of comparison, Gavin says in the past the band have had songs containing more than 120 tracks.]

“I’m thinking, ‘Are we limiting ourselves too much here?'” recalls the guitarist. “But it was only through doing this experience that you realise, by limiting yourself you get better results. You make better creative decisions because the world isn’t your oyster. There was no editing, no computers. The band played live and it was recorded and we’re putting it out.”

Johns’ favoured vibe over perfection. “I remember we got to the first chorus of ‘Breakdown Slow’, and I completely forgot what I was playing,” says Gavin. “So in that first chorus the guitar just stops. Sure enough, Ethan chose that take and I’m thinking, ‘I didn’t play guitar for that whole chorus!’ He said, ‘I know, but everything else is just great.’ You just live with those moments.”

Six days later, Hosking is at the house the Hart brothers share in Sydney’s inner-west, and the band are going through some acoustic arrangements for impending promo gigs. At the rehearsal studio he admitted to feeling more nervous about Limit of Love than he had the band’s first two full-lengths, saying “I think it’s something about getting a bit older and the realities of it set in.” Today, he expands on the thought.

“I’ve never been one to think about the future,” he offers. “But I’m 28 and the guys are in their early thirties, and I’ve [been thinking] about what bands survive past the five or six year mark, what Australian bands prevail and move into the international arena successfully. So I guess the fear isn’t necessarily around the release, it’s just around moving into the next phase with perspective, and with other parts of my life being looked after. I probably wouldn’t have cared five years ago, but I don’t want to end up in 10 years’ time with the band completely successful and the rest of my life in tatters. It’s not something that keeps me up at night, but as you get a bit older, the perspective on things shifts a little bit.”

Such sentiment is reflected in the vulnerability of some of the lyrics on Limit of Love, particularly in songs such as “Breakdown Slow” and “Where’d You Go”. It’s in part a response to what Hosking calls “a couple of health issues that have become fairly impacting on my life”.

“I’ve had a weird, slightly unsolved neurological issue,” he explains, “and that is probably part of the reason we shifted our writing style because I couldn’t take on the workload that I could usually. Songs like ‘Breakdown Slow’ and even ‘Where’d You Go’, I think there’s a little kind of reflection on the loss of control on my end. And at the same time, it’s been quite a fascinating process to watch – being forced to change our usual routines has opened up some exciting creative opportunities.”

Hosking first became aware of the issues around two years ago when he found he started hitting a physical wall quite quickly while surfing, and he began having some cognitive issues which have intensified this year. He’s unable to exercise and, he says, his “ears ring pretty much all the time”, while he’s also having issues with his eyes, where they “do a funny thing where it’s like looking at a TV screen with a reflection on it”. The condition exacerbated the fatigue he felt from touring, and at the end of last year he was “pretty confused and mentally just really out of it and my body was done”. It meant that Tim Hart played a larger role in helping Hosking shape his lyrics than in the past, as the singer felt that “cognitively my brain wasn’t going to that space and doing things it would do, and there were a lot of scattered ideas everywhere that I just couldn’t piece together.

“The good news,” he’s quick to add, “is that I’ve got a good team of doctors, and they’re confident this is an issue I can solve, and I’ve jumped the first level of hoops in terms of the major neurological issues. But at this point, my personal focus is just trying to find some answers and sort all that stuff out.” 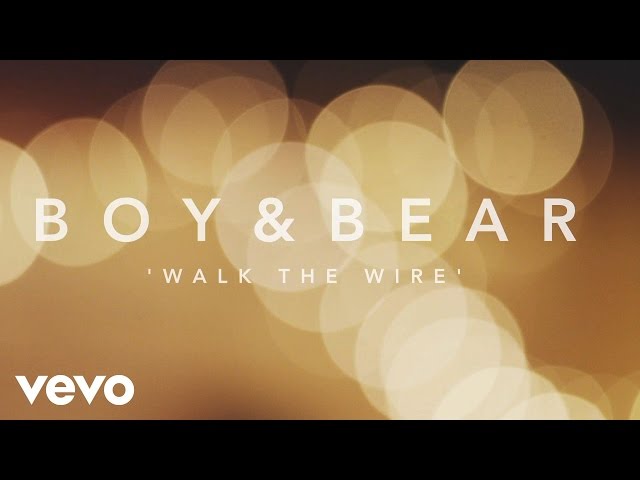 At the rehearsal studio Hosking used the analogy of holding onto a steering wheel to convey his journey with Boy & Bear to this point. When you start out, he said, “it’s kind of like blind passion, blind endless energy towards this thing”, and you’re holding onto the steering wheel as tightly as you can. As the band gathered momentum and all the hard work started to pay off, it got harder and harder to take his hands off that wheel. Though he’s not sure whether it’s a result of wisdom or his health issues, he says he’s finally learning to let go.

“I don’t want to paint myself as some kind of borderline dictator, I think I’m just naturally driven and work hard, and at times I’ve worked a little too hard,” he explains. “And I’ve learned that letting go of certain things and letting momentum take over, you can enjoy the process much more, and the bonus is the work is often better. Sometimes when you care about something too much you can strangle it without knowing it.”