The Black Eyed Peas and Epic Records have partnered with Irish visual artist Jack Coulter for a charity auction through Color of Change. The auction, featuring three of Coulter’s paintings, went live on Monday and will run through July 28th. The paintings are estimated to sell for $20,000 each.

Color of Change “is the nation’s largest online racial justice organization,” according to its website. “We move decision-makers in corporations and government to create a more human and less hostile world for Black people in America.” It was formed in 2005, in the wake of Hurricane Katrina, to provide civil-rights advocacy for black Americans; all proceeds from the auction will be donated to the organization. 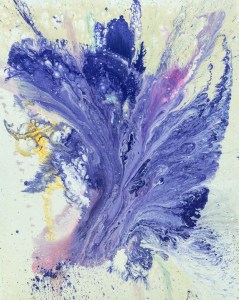 According to Coulter, the project came about during the production of the Black Eyed Peas’ latest record, Translation, as a result of the current protests and reckoning with racial injustice in the U.S.

“I was firstly working with Epic Records providing paintings on a visual campaign for the Black Eyed Peas, painting the sound of their entire new record,” Coulter writes. “During the creation of these, George Floyd was murdered. I no longer had the intention of solely illustrating sound, each piece needed to exude an imbalance of beauty.” His painting methods for the three pieces were unconventional, utilizing objects like glass shards and sticks instead of traditional paintbrushes.

“Art needs to be informative, it can either act as a gateway or be sharp,” Coulter adds. “For example, Basquiat’s painting depicting the death of [black street artist] Michael Stewart, titled Defacement [1983]. Or Kara Walker’s depictions that address the history of slavery and racism. My Translation paintings are vastly different, yet can act in a similar light being auctioned for Color of Change.”