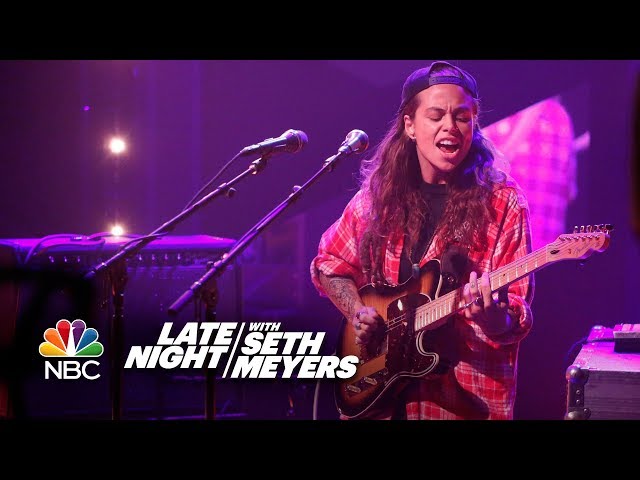 Tash Sultana has just pulled herself off a couch in her dressing room — like a be-hatted, ripped jean version of Princess Leia in A New Hope, but in much fancier digs — and is slowly waking up after a nap “near a big rock” in nearby Central Park.

She’s about to make her U.S. TV debut on Late Night With Seth Meyers in one of the most famous buildings in New York City, 30 Rock, and down the hall is Michael Strahan, two-time Super Bowl-winning former New York Giant and now amiable Good Morning America host, and Justin Hartley, one of the stars of the biggest show on US TV, This Is Us. But at the moment, Australia’s biggest breakout star of the past twelve months is more concerned about sleep.

“I’m still pretty sleepy,” she grins, “I dunno how this will go. But it’s not like anything you can do in Australia. I mean, what, you can play Sunrise? You can’t even play Hey Hey any more!”

As talk spreads to Rove Live and the missed opportunity of late night Australian TV, Sultana sits on a high chair with her legs dangling and worries about making sure she gets the song she’s going to play in under three-and-a-half minutes.

The mood, however, gets grim as the worst mass shooting in American history — at a music festival, no less — is touched on, and then the hammer of Tom Petty’s passing is added. “It’s so sad, so brutal,” Sultana says with a shake of her head. Things only get heavier with a discussion about America’s gun laws and the legitimately discombobulating nature of finding oneself in a state that allows ‘open carry’.

Still, with more visitors mingling around the green rooms of Studio 8G — including The 8G Band, tonight toting a guest drummer in Gene ‘The Atomic Clock’ Hoglan — comes a needed dose of levity. Sultana plays the gracious host, chatting to a couple of her American label and distribution honchos and her knockabout three-man road crew responsible for setting up her equipment rig (multiple guitars, a dizzying array of effects and loop pedals, a drum machine, a synth and sampler and, well, lots more stuff).

And this is when you get a glimpse of how Sultana’s made a career out of connecting with an audience. It’s hard to miss how she — despite likely being the shortest person in the room and amid a never-ending array of production assistants, stage managers and segment producers running around backstage — is still the focus, her easy-going charm putting everyone at ease and making sure each person feels welcome… even though she’d probably prefer to be napping.

But while she’s constantly smiling and talking shit about American coffee, it was only a couple of months ago she had to postpone the final few dates of her European tour due to the mental and physical strain success had put on her. In her brutally honest post about the postponements, Sultana laid out just how the stress and anxiety of being on the road constantly had affected her, and how she needed a break in order to get herself right.

The response was understanding, and Sultana’s r’n’r recovery regime seems to have worked wonders. That regime saw Sultana return home to Melbourne and spend most of her time doing “meditation, yoga, exercise” and going to a nutritionist. She also displays an array of supplements with a wave of her hand and proclaims happily that it’s all natural.

The time off helped, she admits, but adds that’s she’s stoked to be playing again, citing a hint of boredom creeping in while she wasn’t working.

Eventually Sultana’s guests are ushered to their seats in Studio 8G to join the audience being warmed up by comedian Ryan Reiss, as tonight’s musical guest waits to have her makeup and hair done.

Meyers chats to Strahan about the new Snoop Dogg-hosted The Joker’s Wild TV game show he’s executive producing, to Hartley about being on TV’s biggest show, and The 8G Band fill in the gaps (with Hoglan’s terrifying double-kick skills on display) coming in and out of commercials.

Finally, after an impossibly quick set-up by her crew (while Meyers is doing a surprisingly insightful Q&A with the audience), the host introduces Sultana (pronounced “Suhltehneh” in American) and the song she’s playing (“Jungle”), while holding a late-night TV show staple: an enlarged copy of Sultana’s Notion EP.

From there Sultana is a whirlwind of activity, building up the song’s looped riffs and letting them loose with a ferocity that belies her stature. She’s barefoot and dances around the space between her two microphones, pedals and sampler with barely contained glee. Her voice launches into the audience like a coiled snake, twisting and ensnaring them, dragging them ever deeper until she shreds “Jungle”‘s epic guitar solo, which provokes numerous “whoa”‘s from people around us in the audience.

As she winds down from a euphoric high, Sultana finishes to thunderous applause — an older couple loudly exclaim “holy crap, that was really amazing,” another younger gentleman nearby just says “holy shit” over and over — as the entire crowd whoops it up.

With a big smile plastered on his face, Meyers outros Sultana and the show, the pair standing in the middle of Studio 8G looking decidedly odd: the towering, sharp-suited late night host, and the grinning barefoot Australian.

But it’s pretty obvious for anyone there (including the smattering of super-excitable Australians who scored tickets): for a debut US TV performance, that was something.

Afterwards backstage, Sultana is all smiles as she’s surrounded by friends, label folk and one (mostly-useless) hanger-on (me). Congratulations flow, photos are taken, backs are slapped by the studio band, and the vibe is electric. After all, Sultana had just slayed her very first US TV appearance… and on NBC no less. Just as she’s leaving to get to her actual ‘proper’ gig at the Bowery Ballroom for that evening (as part of her sold-out North American tour), she giddily realises something. “I got it under three and half!” she grins. “It was three-ten!”