Towards the end of last year, Amy Shark was in New York meeting with a major record label. This was not the kind of thing the songwriter her parents know as Amy Billings did on a regular basis — indeed, for nearly a decade the 30-year-old had spent her time vying for attention on the pub circuit around the Gold Coast, trying, and largely failing, to get people to take an interest in her original music. But in the wake of her hit-in-waiting “Adore” receiving spot rotation on Triple J at the back-end of 2016, she and her husband Shane (who was at that point her manager) were inundated with e-mails from labels and managers requesting meetings and, in the case of one, an invitation to fly to New York. After meeting the staff — “one by one a group of 15 came in and just started saying they love my music and they’ve listened to my older stuff and this is their favourite and blah blah,” says Shark. “My head was spinning” — she was taken to a restaurant where you could order a $1,000 omelet. Welcome to the big leagues. “I definitely didn’t order that,” Shark guffaws, reclining on a couch in the Sydney Rolling Stone offices. “I was too scared in case they charged me back. I’m always looking for the catch. Why am I here? Someone’s gonna rip me off somewhere.”

Shark’s maturity may account for this level headedness, but it’s also proving advantageous when it comes to penning her music — songs that, in the case of “Adore” or latest single “Weekends”, offer white-knuckled honesty borne out of experience. “I get a lot of younger girl musicians [saying], ‘How do you come up with it? Do you create characters?’ And I’m like, ‘Dude, I’ve just got so much more data to digest and things I’ve been through — relationships, friendships, family bullshit.'”

Ask Shark where the desire to write music comes from, and she points to “a pretty good start in life” thanks to her parents’ record collection; albums that veered from Silverchair’s Frogstomp to the Police, Cat Stevens, and all points in between. Early personal favourites included Blink-182 and New Found Glory (she namechecks Sum 41 and Pennywise as gigging highlights), and former Blink guitarist Tom DeLonge remains an inspiration. (“He knows how to write a great song, and a great melody and hooks galore.”) Shark started learning guitar at 15, but only after turning down an offer from her grandparents to pay for her and her younger brother Mitch to learn an instrument. “I was way more interested in hanging out with my friends after school than going to a tutor to learn an instrument,” she offers. “Mitch started, and one day he came home and he could play [guitar], and I was like, ‘Well, I think I wanna do it now!'”

Shark split her time between learning the instrument (her teacher taught her Chili Peppers and No Doubt songs as opposed to making her learn scales) and pursuing her of love acting and theatre. She was, she says, never a kid who thought “I’m gonna be a movie star”, so developed an interest in life on the other side of the camera as a back-up. As a teen she’d take her video camera to parties (“I would always be the one with the really feral footage”), and she became “obsessed” with shooting vision and learning how to edit. She studied at uni, but dropped out halfway through. “I was getting heaps of work as a videographer, doing weddings and 40th birthdays,” she shrugs. “I had all my gear and was like, ‘I don’t need uni.’ Now I wish I completed it just to say I finished that.” 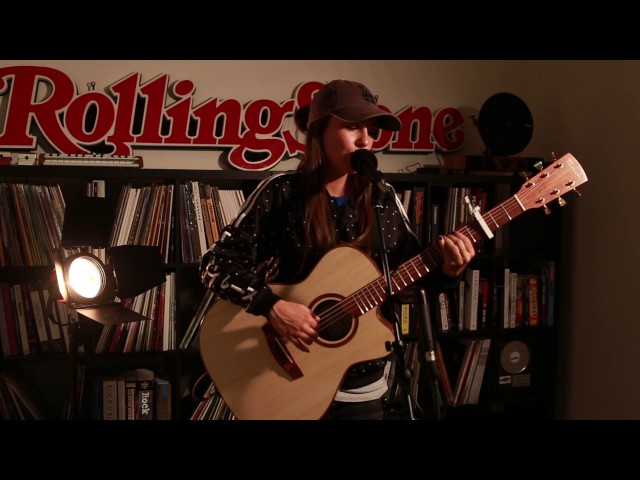 Eventually Shark took up a job as a video editor for the Gold Coast Titans (with whom her husband works), a position she was able to leave recently after the Platinum success of “Adore”. (The song also reached Number 2 on the Hottest 100, has had more than 12 million Spotify streams, and was shortlisted for the APRA Song of the Year.) The 30-year-old is the very definition of an artist whose overnight success took more than 10 years to achieve.

Shark formed her first band, Hansel Kissed Gretel, toward the end of school, and describes it as “quite thrashy”, though it fell apart when its members splintered. “I kept going, kept writing songs on my acoustic guitar,” she offers.

A break of sorts came at the age of 21, when Shane enrolled her in a Jack Daniel’s band competition at Seagulls football club without telling her beforehand. She shudders at the thought. “I didn’t even wanna put my stuff on MySpace, so I was like, ‘I’m not playing in front of people, no way.'” A stream of covers gigs followed, which were “soul destroying”, but brought in some cash. “I feel like I’ve been through a big bootcamp of training, like dealing with the drunk banter and that,” she says. “Nothing really scares me live.”

By her late-twenties, Shark had consigned herself to a future pursuing music as a passion more than a profession. Determined to have Grammy-winning producer M-Phazes work on one of her new songs, however, she approached his management. Phazes agreed to a collaboration, but she failed to secure the Regional Arts Development Fund grant necessary to help pay for his services. Rather than give up, she waited another year and applied again, this time successfully. Then she sent him two songs, before settling on “Adore”.

Fast forward a year, and Shark has just released her debut six-track EP, Night Thinker, through Wonderlick/Sony, having recently signed a management deal with UNFD. The success of “Adore” afforded her the opportunity to work with producers such as Dann Hume (Evermore), and to completely re-work and re-record the version of the EP she’d made (but not released) with a friend. “Now this EP is on steroids,” she laughs.

Shark’s started to think about her debut album, and has been having conversations with Lorde’s producer Joel Little. She has a fair arsenal of songs from which to choose — at one point she leans forward from the couch and opens up the voice memos on her phone, revealing more than 250 song ideas. “Maybe it’s because I wasn’t signed when I was 16,” she muses, “but I’m in my ways, so I’m never gonna turn into a dick or be unappreciative, or take things for granted, because I’ve just seen too much. I’ve been through too much. I’ve had so many people not give a shit about me.”