More than three decades since its birth, the broad-spanning, ill-defined and oft-derided underground-rock movement known as “emo” shows no signs of slowing. The monthly DJ party known as Emo Night, founded in 2011, has popped off in multiple cities across the U.S., starting in Brooklyn and expanding all the way to Los Angeles. Picture hundreds of beer-sloshing twenty- and thirtysomethings screaming their heads off as DJs spin the most tearjerking tracks from their teen years. Of these songs, one never fails to provoke a particular kind of response from fans, a bizarre mixture of pain, rage and ecstasy, encapsulated in a single collective groan: American Football‘s epic 1999 kiss-off “Never Meant.”

Established roughly around 1997, American Football was a short-lived collaboration among three friends at the University of Illinois in Urbana-Champaign – Mike Kinsella, Steve Holmes and Steve Lamos – and it was never meant to survive past their graduation. Often described by its members as an “art project,” the band would convene for after-school jams that resulted in labyrinthine two-guitar interplay, set to jazzy time signatures (and the occasional burst of trumpet, which Lamos first picked up in his dad’s polka band). Their catalog consisted of just 12 songs, and their live performances were mostly limited to campus events and their friends’ basements. Yet since the 1999 release of their eponymous LP, and their breakup immediately afterward, American Football have amassed an international cult following and spawned dozens of imitators – the latest being the Wuhan, China–based four-piece Chinese Football.

It’s a Wednesday afternoon when I call Mike Kinsella, the band’s guitarist and lead singer. After the dissolution of American Football, Kinsella moved to Chicago, got a job at a daycare centre and performed primarily solo under the alias Owen since 2001. But today, he’s working a day shift as stay-at-home dad to his two kids. (“Sorry,” he says. “I’m at the zoo. The seals are barking.”) Also on the phone is his bandmate and childhood friend, guitarist Holmes, another Chicago resident, who works full-time in tech at a payroll company. Drummer and horn player Lamos is now a writing professor in Boulder, Colorado. Kinsella’s cousin Nate has joined them on bass. As of October, the band had just released their first album in 17 years – like its predecessor, officially self-titled – but according to the members, they would never have conceived of the idea had it not been for the enthusiasm of their fans.

“We knew the band had some kind of following,” says Kinsella, “because we’d keep getting royalty checks from Polyvinyl every year. I just assumed it was Owen fans that were buying the LP. … Every now and then, somebody at an Owen show would ask for ‘Never Meant.’ I didn’t realise my old band had taken on a life of its own.”

In May 2014, in honour of American Football‘s 15th anniversary, Champaign indie label Polyvinyl released a deluxe reissue of the LP, and the demand subsequently crashed their website. The record would peak at Number 68 on the Billboard 200. Following the reissue, American Football resolved to bring their music out of the basement and into the world that fall: first with a hometown reunion show, then three more gigs at New York City’s Webster Hall. (“I thought, ‘Well, there’s no way we’re gonna sell that out,'” Kinsella says.) They would go on to sell out multiple reunion shows in the States – and eventually in Europe, Japan and Australia.

“I think we’re all still kinda surprised,” says Kinsella. “To have this band that was our bedroom college project and, you know, 15 years later, they’re singing every word, asking us for autographs afterwards. The whole thing has just been kind of mind-blowing.” 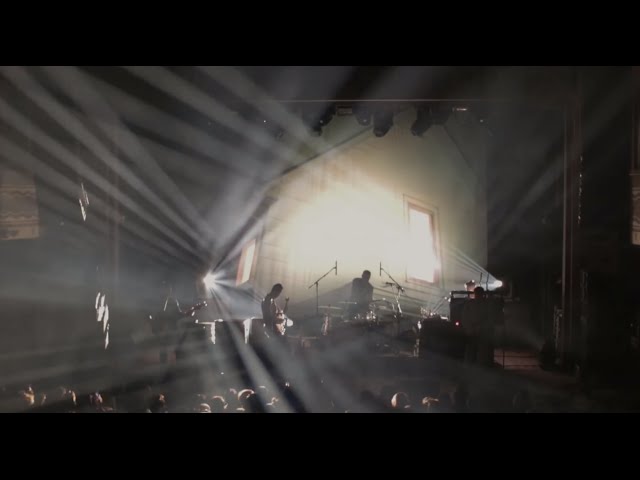 From appropriately titled opener “Where Are We Now?” onward, the new album isn’t just a rehash of the band’s old sound but a testament to American Football’s artistic and emotional evolution. The production feels tighter, as do the band’s intricate, mathy compositions. In contrast with Kinsella’s confessional, grief-stricken hollers of yesteryear, his vocal delivery here feels much more contained and intentional.

“People seem to like it, and that’s cool,” Kinsella says. “But, like, the minute you try to like make something new … people get mad that we’re gonna tarnish however they felt about our first record, which is weird. The first record was, like, a high school diary. People also critique how my voice has changed? I mean, yeah … I got older.”

Earlier this year, American Football ranked at Number Six on Rolling Stone‘s 40 Greatest Emo Albums of All Time list – but according to Kinsella and Holmes, they were decidedly “not emo” from the beginning.

The general consensus goes that the beginnings of the movement can be traced back to Washington, D.C., in the mid-Eighties, when members of hardcore bands such Minor Threat and their ilk stepped back from writing political punk sermons to pen songs of heartbreak and loss. The result would be known as “emotive hardcore” – to Ian MacKaye’s chagrin, sometimes abbreviated as “emocore” – first exemplified in bands as Rites of Spring and Embrace. The sound would expand to different regions and evolve into various forms: from the doom and gloom of Seattle’s Sunny Day Real Estate to the more tender approach of Milwaukee’s the Promise Ring.

Kinsella first familiarised himself with emotive hardcore while playing drums in his older brother Tim’s band Cap’n Jazz – a rollicking joyride of a post-hardcore band that in its most rudimentary stages, Kinsella says, was called Toe Jam. “Cap’n Jazz had that sort of Dischord, Fugazi influence,” says Kinsella. “But in our minds, [American Football] was a 180 from that. We were consciously trying not to rock out. Instead we tried to write like Steve Reich, who composes film scores. We were content playing quiet and repeating things for six minutes and letting the drums be more musical and cue changes and stuff. It’s different from like, ‘OK, now I’m gonna hit my distortion pedal.'”

“We thought we were doing more complex, post-rock stuff like the Sea and Cake, or Red House Painters,” Holmes adds. “No pedals – just a major-seventh chord and lots of alternate tunings that Mike and I found, or rather, thought we invented.”

Still, it’s hard not to imagine a sound as quintessentially emo as American Football’s cinematic portraits of suburban youth: marked by sweeping instrumental crescendos and vocalist Mike Kinsella’s agonised, teenage yawp, matched in melodrama by song titles like “I’ll See You When We’re Both Not So Emotional.” Though the newer songs have more of a sardonic feel, traces of that old torment seep into cuts such as “My Instincts Are the Enemy” and “Home Is Where the Haunt Is.”

“Why is one genre emo and every other one is not?” asks Holmes. “I just think it’s so dumb. Aren’t the Smiths the most emo band that ever was? Isn’t all good music emotional? If so, Tori Amos is pretty emo.”

“Tori Amos is so emo,” Kinsella laughs. But he wonders if the term makes for a better social descriptor than a musical one. “I think we only get ’emo’ because of who we were friends with – other Midwestern bands like the Promise Ring, Braid and Rainer Maria.”

Following comebacks by Promise Ring, Braid and American Football, Rainer Maria finally hopped on the reunion bandwagon on New Year’s Eve in 2014. According to singer/bassist Caithlin De Marrais, Rainer Maria had been a band for a year before she first encountered the “emo” term at the Braid house in 1995. “Up on their wall was a Remo drum box with the ‘R’ cut out,” says De Marrais. “‘Emo? What’s that?’ I asked. People laughed and someone quipped, ‘You know, that’s supposed to be our genre.'” The association doesn’t seem to faze her as much as it has the men interviewed by Rolling Stone, but she remains somewhat baffled by the association. “I was influenced by bands like New Order, Galaxie 500, anything with melodic bass sensibility,” she continues. “But there was definitely something happening in the Midwest at the time that we were deeply moved by.”

Vexing genre tag aside, this small Midwestern community in the Nineties still resonates with artists to this day, from pop sensations like Fall Out Boy to Dashboard Confessional’s Chris Carrabba, or Evan Weiss of Into It. Over It., who can be seen playing guest tambourine at American Football’s reunion shows. Over the phone, Weiss says he first heard American Football on a mixtape, given to him by a friend in high school. Sensing an affinity with the Illinois indie rock scene, the New Jersey–born singer-songwriter packed up and moved to Chicago in 2011, hoping to meet some kindred spirits. He met none other than Kinsella at a Halloween party that year – a decade since receiving that fateful mixtape – and in 2013 the two released music as Their/They’re/There, a high-energy melodic punk act that revives some of Kinsella’s swift drumming techniques from Cap’n Jazz.

Those years saw an uptick in similar acts that some journalists christened the “emo revival,” including Weiss among its ranks. But Weiss argues that his music is not made for the sake of reliving the past. “What people call emo these days is just people who grew up in scenes with DIY, hardcore punk ethics, but who gravitate towards melodic music. Punk kids who listen to Yo La Tengo.” Moreover, he adds, “It’s not an ’emo revival’ if it never ended. People like Mike were making music all along. It’s just evolved some over the years. … New people come in and help change it. And that’s how it’s supposed to be.”

Kinsella has said of Weiss, “I don’t know about an ’emo revival’, but Evan’s so good at whatever we wanna call this … genre. If we’re all part of this [family] tree, he’s like the next branch off from whatever tree started a long time ago, like way before us. His music sounds like a little bit of everything I grew up with. So we just clicked, musically.”

But even as a longtime fan, Weiss wasn’t star-struck when faced with the prospect of working with Kinsella. “We’re just a bunch of regular white guys who live in the same town and like playing music together,” he laughs. “We get compared to each other a lot, though,” he adds. “I think my style is different, more aggressive. … But [I] still can’t play a guitar all pretty, in open tuning, and not get compared to Mike. I mean, plenty of guitarists have been doing that since the Seventies, like new-age guitar players, or people like Mark Kozelek. But our bands share a similar history, a location, a geography.”

After a late-October show in Chicago, American Football will return to their spiritual home of Urbana-Champaign this December to begin a further run of gigs in support of the new LP. “We couldn’t keep playing the same 12 songs anymore,” says Kinsella. “People can say it’s a money grab, but we’ve played 40 shows in two years and we’re splitting it four ways with management. We’re not, like, 25 and swimming in money. We all have regular jobs; we’re all parents.”

“We’re having fun,” says Holmes, “Which is why we decided to make another record and keep playing after the reunion. We get to meet cool people and go to exciting new places. Regardless of what city you’re in or what country you’re in, the crowd reaction is almost the same everywhere we go – it’s like a sports game. The first time Lamos plays the horn, people always go nuts. People shout back [Mike’s] lyrics. I think for a lot of people it’s like a surreal moment for them, like, ‘Oh, I never thought I would get to see this band,’ and we could definitely feel that energy. I think that’s why we’ve kept doing it. Originally we said we would never do it, then we said, ‘Alright, we’ll do these two shows,’ and now here we are, you know, two years, 40 shows later.”

“This thing is helping us put tile in the bathroom and stuff,” says Kinsella. “But really, it’s the best part-time job.”