Julian Casablancas is famously press-shy, but the singer agreed to an interview in support of his excellent new album Tyranny with the Voidz. Over several hours on a recent weeknight in New York’s East Village, the singer opened up about everything from his difficult teenage years to why he had a hard time enjoying the Strokes’ early success to his new obsession with politics. He also explained why he rarely does interviews: “I don’t like exploiting your personal life. You already have to be so vain to perform, to go onstage and say, ‘Look at me!’ But it’s more inspiring, better for your personal business, to keep some [mystery].” Here are 22 pieces of info that chip away at the mysterious Casablancas:

While the Velvet Underground and Doors influenced his songwriting, he’s also been trained in classical music theory.
“I wanted to learn the basic rules. If you’re going to be a surgeon, you want the one who studied, you don’t want the one who was the most inspired. Studying four-part harmony and all that stuff, and I wasn’t a master by any stretch, but I think it really helped me understand what all the moves are. Like, you hear a Radiohead song and you know exactly what they’re doing just off the bat, it makes you avoid traps and cliché. It’s important.”

He’s extremely close to his stepfather, the artist and academic Sam Adoquei, who grew up in Ghana and introduced Casablancas to the music of radical Nigerian funk titan Fela Kuti.
“He’s incredible. He taught me you have to have passion and joy and even the practicing of the thing because part of the joy of the fulfillment is in the chore. He has an amazing book, Origin of Inspiration. It’s what I heard every night from him growing up, just talking about art. “

His drinking affected how he looks at the Strokes’ early years.
“People look at that time [and say], ‘You made a splash, you made it, everyone loved you.’ I was also drinking a lot, so it really took away the enjoyment. I really regret that. Like, I should do PSAs. I wish I could remember it better. That made it all a vague, hazy memory. So there was never this kind of ‘We won the championship!’ moment, you know what I mean?”

Jim Morrison was not a good role model for him.
“The Doors were terrible role models. Jim Morrison probably worked and read awesome literature and worked on poetry in sobriety for years, and then he finally made it, and he partied and acted like a maniac and people think, ‘OK, if I want to sing cool, I have to drink whiskey.’ But it doesn’t work that way. And then he died at 27. I think I was living that kind of mimicking cliché. . .And I felt kind of really roughed up by it. And so I realized what I really wanted to do was make positive things.”

He prefers Room on Fire to Is This It.
“I wanted to finish the Is This It? thought; even when we were doing it, I always thought it was part two [of Is This It]. I remember when we started ‘Reptilia’ and ‘The End Has No End,’ I was like, ‘This is the new vibe.’ I think we always felt like we were in jeopardy. When we did Room on Fire, things were established, but things were internally, at least from my perspective, not healthy.” 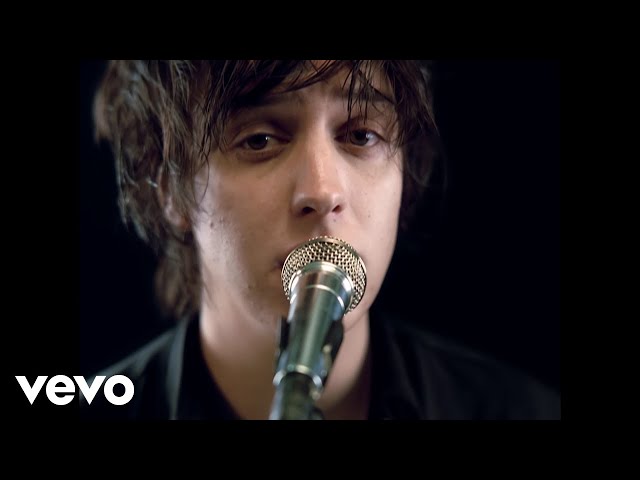 His “iron-fisted” creative control of the Strokes led to a lot of problems.
“[On Comedown Machine] I maybe wasn’t kind of as iron-fisty as I had been in the past, but on purpose, because that created all these issues. I think it’s important for someone to – whether or not I think it’s better – for someone to have their say. I’m still writing a lot of parts and songs and we’re playing together, so it’s not like we’re mailing each other songs and that we never see each other.”

He took issue when his Strokes bandmates said he wasn’t around during the sessions for 2011’s Angles.
“The funny thing about Angles is there was all that weird talk about recording it separately. We just had dinner in L.A. and we were all talking about it. And they forget that we sat in a room in a studio and were writing songs forever. That’s where we did the whole record. All the parts, the songs, in a room, together. We recorded them with two mics, and that was the foundation, and then we were going to go track the official recording. That’s when they went and recorded stuff, and when the ‘Julian wasn’t there,’ BS or whatever [started]. That was just because logistically, we’d never done a record like that.”

He doesn’t take the Strokes’ legacy – including their influence on music and fashion – very seriously.
“I don’t see that in any mega-positive way that I’m like, proud. Like, are more white people wearing Converse? Good. Mission accomplished.”

For inspiration, he spends a lot of time editing the work of other writers.
“I like quoting or taking other writers’ [works] that are really amazing and editing it. Like you know A People’s History of the United States is so amazing, but it’s gonna be a fringe group who will read the whole thing. But if I were like, ‘Here, read these three lines,’ you’d go like, ‘Woah, what the fuck?!’ My favorite book is The Odyssey, but a very specific translation.”

He was deeply affected by the death of Lou Reed.
“We had the same booking agent. One of the things on my list that I really wanted to do was a song with him. He’s just a symbol for what I feel should be mainstream. I think if the mainstream were a little edgier it’d be a lot harder to keep people in the dark. I mean, you read Lou Reed lyrics and it’s mind blowing. And I never even realized how good the lyrics are because it sounds so effortless. It’s actually mega deep.”

He has a lot of regrets about his 2009 solo LP Phrazes for the Young.
“Tyranny is kind of the opposite of Phrazes, which is what I somehow thought would be more popular, or something. That was so dumb and not me. I catered to things that I think are very unhealthy, and that’s thinking what other people would like mixed with experimental thoughts. I think I was too concerned, because I was coming from the Strokes, about perception. I realize that that’s not the way to approach it.” 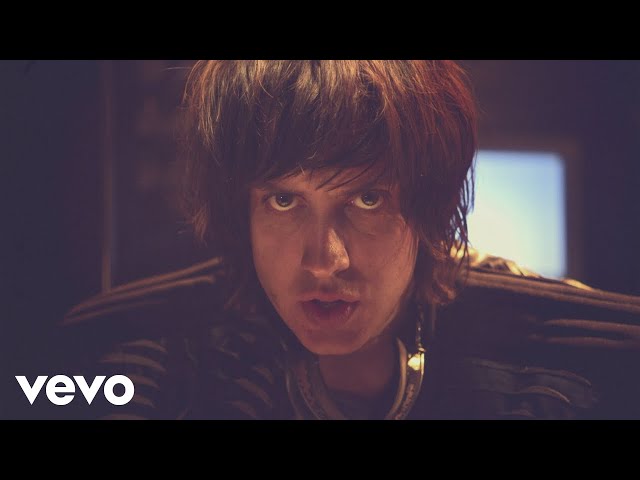 When we walk past a juice bar, he says that’s one of many reasons why he’s leaving New York to move upstate.
“With New York, it’s gentrified. . .and I don’t mind it – it’s just a part of history. People have brunch all day, but you have to be reticent of what it means for the rest of people. I don’t mind a luxury building, but it’s indirectly contributing to like issues and other parts of the city. It’s annoying, upsetting, and frustrating, but still it’s the cultural center of the world.”

Like the Strokes, the Voidz are a long-term project – and he wants both bands to work together.
“I feel like the Strokes is an oak tree, and this is a new plant. So I’m focused on that right now. The plan is to eventually have two trees and swing in a hammock. One side nailed to each tree. It would be cool playing shows with the Voidz and the Strokes, that could be a cool model.”

He loves the Adult Swim show Xavier: Renegade Angel.
“That’s maybe my favorite show ever. I don’t know if they were making fun of the Sims, but it’s all CGI, kind of. It’s like they made some kind of mistake and it looked really crappy, and they were like ‘Perfect!’ It’s just so rapid fire, so dense, it’s insane.”

He’s really critical of the media, especially cable news.
“The people who run all the mass media outlets, they don’t really want people to understand [issues]. I don’t really see that much of a difference between Fox and those other networks. It’s not that the people that they hire are bad or lying, but they’re not hiring radical truth sayers. They’re hiring people that they know are vanilla and if people get a little too crazy, they get rid of them.”

He’s concerned about net neutrality.
“It’s terrifying! It’s going to take you 20 minutes to look at TruthDig. And then you’re going to be like, ‘MSNBC says ‘Look at Kim Kardashian!’. . .You don’t want dictatorships. Can you really argue that America is not a corporate dictatorship?”

He goes way back with Voidz guitarist Jeramy “Beardo” Gritter.
“I was a fan of Beardo long before I knew him from going to the Mars Bar in New York, which closed down. During Phrazes, I was even thinking, ‘It’d be cool to play in a band with that dude.’ And then Alex [Carapetis, drummer] lived with the guy. We hung out, we hit it off, and we have so much in common. We’re the same age, we’ve all been in bands, too. We all know the pitfalls, but we’re still kind of young enough that we’re hungry. This is the moment where it’s come together for us.”

He geeked out while interviewing Robbie Krieger and Ray Manzarek for Complex in 2012.
“That was so fun. I asked Ray about ‘Universal Mind.’ And I don’t want to say he ‘snapped’ at me, but he was kind of acted like it was so random. And later, I asked in a different way, and he kind of sang all the lyrics word for word. That was a funny because it was a lesser-known Doors song that I’ve always loved. It was so cool, man. Robbie Krieger seems like a real cool guy. Ray Manzarek seemed pretty intense. A lot of people dismiss the Doors, but I think they’re pretty dang legit.”

He’s working on building the perfect folding electric bicycle.
“It’s kind of breaking my heart with how long it’s taking, but it’s pretty amazing. It’s an electric folding bicycle thing, no pedals, and it folds up to the size of a briefcase. The only people who want to do this are these German engineer guys. They have this thing called Free Cross, it’s like an exercise machine. And this is the exact opposite. The Free Cross is just basically a full-body exercise machine that you take out into the world. And this is just a lazy man’s thing so you can kind of be transported without spending any energy.”

He’s a huge soccer fan.
“I play soccer a lot now. I’ve probably been playing five or 10 years. I need to chase a ball. Going a gym is too depressing for me. But if I have to chase the ball to score, I’m like a dog.”