It’s the bad-movie franchise that Twitter built. When Sharknado – the saga of a man, his chainsaw and a bunch of poorly CGI’d sharks flying through the air in L.A. – aired on Syfy last year, it became a surprise social-network sensation, racking up enough mentions to compete with the likes of Game of Thrones. Suddenly the Asylum, the production house known for direct-to-video knockoffs like Transmorphers and Syfy schlock like Mega Shark vs. Giant Octopus, had a hit on its hands. The sequel, which debuted tonight, had an expensive NYC setting, a galaxy of celebrity cameos, and seemingly the full weight of NBC/Universal’s promotional muscle behind it. And like the original, it was…a learning experience. Here are the 10 lessons we’re taking away:

1. You don’t need to have seen Sharknado to follow the story of Sharknado 2.
I know — it was my biggest concern, too! It had been a while since I’d watched the original film, in which Ian Ziering and Tara Reid played an estranged couple – he’s a surfer, she’s, I dunno, a doctor or something — who reunited in a Los Angeles inundated with tornadoes carrying sharks, which they defeated by bombing the tornadoes, as one does. Would I remember enough of its complex narrative to understand Sharknado 2‘s expansion of the Sharknado mythos? Fortunately, the opening scenes catch you up: They’re trying to get back together, they’re reeling from the effects of post-sharknado fame, they’re hawking a book called How to Survive a Sharknado, they’re visiting family in New York played by b-movie starlet Kari Wuhrer and Sugar Ray doofus Mark McGrath, they’re very good at detecting and combating freak storms with sharks in them. Got it!

2. When touching down in New York City, sharknadoes and Midwestern tourists have the same itinerary.
From the excitement of a Mets game at Citi Field to the living history of the Statue of Liberty. From the hustle and bustle of Times Square to the comfort and luxury of a hotel with convenient access to Times Square. From the studio of The Today Show to the studio of Live with Regis and Kelly. Yes, Sharknado 2 really made the most of that on-location New York City shoot, showing off all the local character you can find within convenient walking distance of the 7 train.

3. Climate change is real, and sharknadoes are the proof.
Along with rich character work and intricate worldbuilding, scathing political commentary on the perils of anthropogenic climate change is a constant in both of the Sharknado films. In this installment, we see New York City at the center of wild weather patterns – tropical storms moving in from one direction, unseasonal summer blizzards from the other. In addition to creating optimal conditions for a sharknado, these unstable climatic conditions recall the snowstorm that followed Hurricane Sandy in 2012, further devastating the New York metropolitan area. Or maybe it’s just a crass and thoughtless way for the movie to explain why half the time there’s an outdoor scene, there’s snow on the sidewalks and you can see the actors’ breath even though it takes place in July. Either way!

4. Watching sharks attack annoying celebrities isn’t as much fun as you’d think.
When the first shark soars through the aisle of an airplane and bites off Kelly Osbourne’s head, it’s funny. When another one chows down on nerd-media icon Wil Wheaton, it’s amusing. By the time Perez Hilton shows up on a subway platform, you’re just counting down the seconds till an unconvincing splash of CGI bloodspray signals his departure from your TV screen. Hell, several of the most irritating d-listers who show up – Andy Dick, Billy Ray Cyrus, Subway’s Jared – don’t even give us the satisfaction of dying.

5. Watching sharks attack actually pretty cool celebrities isn’t that much fun either.
Shot on a shoestring and intended to be just another widget cranked out by the Syfy Originals schlock factory, the first Sharknado had a cast to match its ambition. When the dust settled and the sharks landed, it’s not like the careers of Ian Ziering and Tara Reid were gonna take a huge hit — only Sopranos and Home Alone veteran John Heard was gonna have to answer to his god for appearing in that thing. This time around? Comedians-slash-character-actors Richard Kind, Judd Hirsch, and Robert Klein all get fake shark blood on their hands, as do bona fide hip-hop legends Sandra “Pepa” Denton and Biz Markie. (Stick with Yo Gabba Gabba!, Biz.) If you’ve ever wanted to watch Robert Klein make stage chatter with WWE Superstar Kurt Angle while they play the Mayor of New York and the Chief of the FDNY respectively, or see Pepa get squashed by a whale shark while riding a Citibike, this is your big day, you weirdo.

6. The Today Show is awkward even when it’s being attacked by sharks.
Ukraine, Gaza, ebola, sharknado. In these troubled times, we turn to trusted news anchors like Matt Lauer, who has almost as much Sharknado 2 screentime as Tara Reid. At one point, he and genial weather guru Al Roker have a weirdly passive-aggressive back and forth about whether to call them “shark storms” or “sharknados,” arguably the most uncomfortable morning-TV moment since Lauer asked Anne Hathaway about her wardrobe malfunction. Later, the pair stab a shark to death live on camera, handling its exit just slightly better than Ann Curry’s.

7. Kelly Ripa and Michael Strahan are way too good at this.
Of all the celebrities who subject themselves to Sharknado 2, the hosts of Live with Kelly and Michael are the only ones who don’t come out smelling like last week’s seafood. Whether it’s their eerily convincing banter when discussing the plane crash that kept Tara Reid’s character from her scheduled interview on the show (“Our prayers are with the families of Flight 209,” Strahan deadpans) or their instinctive reactions when the studio is assaulted by flying sharks (Strahan decks one; Ripa stabs one in the brain with a stiletto heel), they make it look charming. If it weren’t for a shark eating longtime Live producer Michael Gelman, it’d almost seem like just another episode.

8. It’s terrifyingly easy to gain access to makeshift weapons in Mayor Robert Klein’s New York.
Midtown delis sell road flares and cans of lighter fluid. Pizzerias run by Biz Markie have a supply of propane tanks. The trunks of random motorists are full of machetes, pitchforks, and machine guns. (Okay, those weapons aren’t so makeshift.) “This is the Big Apple,” the comedy legend turned mayor of America’s largest metropolis tells Fin before his people run wild through the streets, slaughtering anything with gills. “When something bites us, we bite back.” Eat it, DeBlasio!

9. Vivica A. Fox cuts some sharks apart with a sword.
I mean, there’s not much more to say about that. Is it too late for Quentin Tarantino to make all those Kill Bill prequels and sequels he was talking about?

10. During “an EF5 sharknado,” sharks can come down at a rate of up to “two inches an hour.”
Even in a movie with the premise that sharks can be sucked into waterspouts by the thousands and dropped, alive and biting, into a major American city, this is goddamn gibberish. 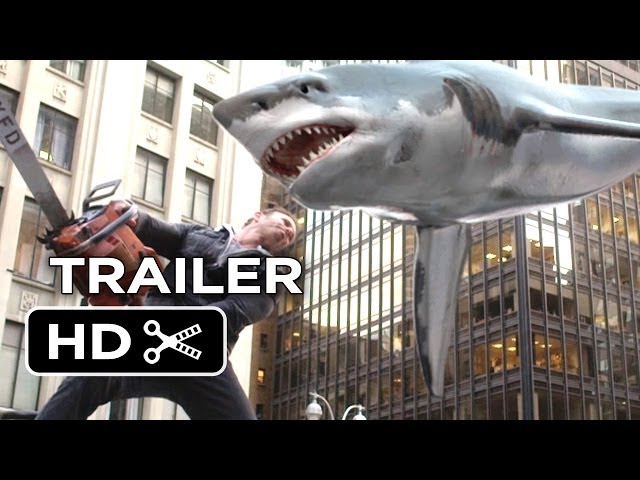