Things were looking good for Spoon as spring arrived in Austin, Texas, this year. After a few months of spirited sessions at drummer Jim Eno’s studio, the long-running indie-rock heroes were getting close to the finish line on their 10th studio album. The songs were sounding tight, and the band was feeling loose. “I’d say we had 70 or 80 percent of the record done,” recalls frontman Britt Daniel, 49. “We were recording right up until March 10th. And then March 11th was when this whole mess kicked into high gear.”

That mess has a familiar name: the Covid-19 pandemic, which upended American life soon after Daniel and his bandmates last met in the studio. The music industry has been hit particularly hard, with artists unable to make money or promote new releases on the road. Spoon, whose members are scattered across Austin, Brooklyn, and Los Angeles, have been forced to sit on a nearly complete album for six months and counting — and they have no idea when they’ll be able to gather in person to finish it. “This is definitely the longest we’ve ever spent on a record,” Daniel says. “It’s so far along, and yet so far away.”

The album began around late 2018, when the band started recording at Eno’s studio with British producer Mark Rankin, whose work with Adele and Queens of the Stone Age had piqued Daniel’s interest. Working in weeklong bursts in between tour dates, they found themselves drawn toward a live-band sound that contrasted with Spoon’s previous album, 2017’s Hot Thoughts. “Over the last couple of years, we got better at putting on a show,” says Daniel, who credits this in part to the addition of guitarist Gerardo Larios and bassist Ben Trokan to the lineup of himself and Eno, who founded the band together in the early 1990s, and keyboardist Alex Fischel, who joined in 2013. “My thought was to take that energy and make a record with it.”

Daniel had been listening to a lot of rock music from the late Sixties and early Seventies, when studio technology was just beginning to progress past its 4-track beginnings — the kind of music he loved as a high-schooler in Temple, Texas. “I met a girl who got me into the Doors in the summer of my junior year,” he recalls. “I got all the records on cassette. I was obsessed with them.” Later, as he entered his twenties and got into bands like the Velvet Underground, he ditched the Doors, but more recently he’s come back around to appreciating their 1967 debut and its follow-up, Strange Days: “There’s really something to it. I love the way those records sound.”

Their influence on Spoon’s new music won’t necessarily be immediately apparent. “There might be a couple of Moogs on the record, but I wouldn’t say that it sounds like a Doors record,” Daniel adds. “What I like about that era is the limitations of the recording, and what kind of sound that created. That’s what I’m thinking about, more than trying to make ‘Riders on the Storm, Part Two.’” (Similarly, though he’s been getting back in touch with Led Zeppelin’s 1969 debut lately, he won’t be hitting any Robert Plant high notes: “I don’t have that range,” he notes wryly.)

The bandmates gathered six or seven times before this spring, working mostly with Rankin and at least once with producer Justin Raisen (Kim Gordon, Angel Olsen). By early March, they thought they had a shot at finishing the album in time to release it this fall; when the shutdown began, they hoped they could reconvene later in the spring and stick to that schedule. But as the pandemic raged on, those hopes fell apart, as did a later plan to finish the album over the summer. “As May became June and June was becoming July, that’s when the case numbers in Texas just went bananas,” Daniel says. “It became a real shit show.”

Since then, he’s been more or less in limbo, watching old movies like 2001 and Taxi Driver and writing lots of new songs at home in Austin. “Now I feel like we’re even further away,” he says, “because I want to record some of those.”

So far, the band has about 30 songs in hand, ranging from completely finished recordings to partially recorded tracks to rougher ideas. “There’s a song called ‘My Babe,’ written about my babe,” he says. “It starts off as almost a piano ballad, and by the end it’s a full-on, one-fist-in-the-air rock song.” He describes another favorite, “The Hardest Cut,” as being “about war games in your mind.”

“Lucifer on the Sofa” is one of the songs he’s written since the shutdown interrupted the recording process. It began with a snippet of him and Fischel jamming on acoustic guitar and piano over a drum sample. “Then I took that 20 seconds and looped it to infinity, and came up with a free-form song,” he says. “It’s not a song that has a typical chorus. It just kinda has a groove. The challenge is to make that interesting for three or four minutes.” 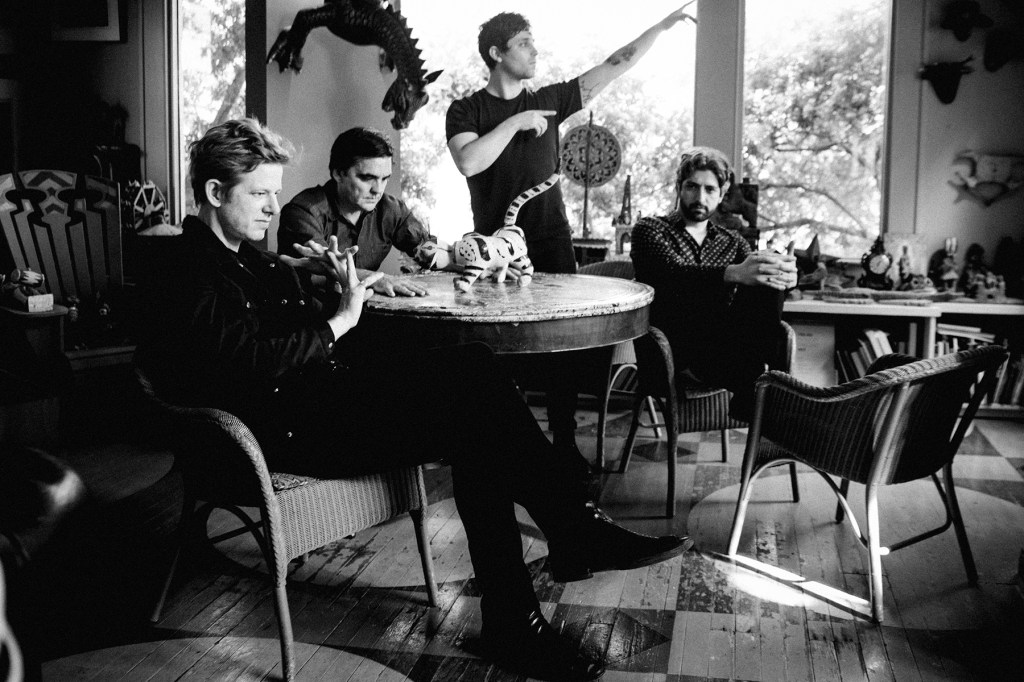 Mostly, he says, this period has been “about trying to keep my head in a good space.” Staying busy with songwriting has helped with that. So have periodic 1,300-mile drives out to L.A., where he’s done some work with Fischel. “When we used to tour in vans, I would do that drive between Texas and the West Coast several times a year,” he says. “Believe me, I got to where I did not appreciate it. But now, it just feels so good to be out in the big, wide world. Even stopping at a gas station feels like a little adventure. I love it.”

He’s now hopeful that Spoon will be able to complete the album for an early 2021 release. “I’ve gone through a few titles,” he says before listing some possible names for the LP. “War Ballads was one. Texas Is the Reason, I really liked that. Nerve Damage. I’m leaning on Winter of Love right now.” (As for its significance, he adds, “I think you’re gonna have to wait to find out. I’ve always heard about the Summer of Love. I’ve never heard about the winter.”)

First, though, the full band still has to get together to finish recording and pick a final sequence. “The songs have a lot of different moods,” Daniel says. “There’s one that’s got a Spanish flavor. There’s one that’s got an R&B flavor. There’s a straight-up epic rock song. When you’ve got all those choices, you can really shape the identity of a record by leaving something off.”

No one can say for sure when that in-person reunion will be possible. “That’s the trickiest part about it. If you knew that you had to be in solitary confinement for six months, that’s one thing. But to not know how long it’s going to last, that’s what really does your head in.”

As hard as it is to keep waiting, he sounds excited about the way the album is shaping up in his mind. “There’s this one last step that we’ve got to do,” Daniel adds, “and I’ve just been dying to do that work.”