It’s a new chapter in my life as a storyteller,” says Questlove, fresh from reinventing the concert movie with Summer of Soul. His directorial debut, which embedded much-needed Black-history lessons inside jaw-dropping, long-buried performances from Stevie Wonder, Mahalia Jackson, Nina Simone, B.B. King, and many others, was one of 2021’s most acclaimed movies, and an almost certain Oscar contender (it already made the best-doc shortlist). There’s a soundtrack album out Jan. 28, and Questlove is already working on a follow-up film, focused on Sly and the Family Stone. But that’s just the beginning of the new career he’s embarking upon at age 51; there are numerous other Questlove productions on the way. “Right now, there are six projects down the line that will keep me busy, realistically, to probably 2032,” he says. “You can only imagine how long the line is of people saying, ‘Can you tell our story the same way you told this story?’”

How concerned were you about whether Summer of Soul would appeal to younger audiences?
With this movie, the very first question I asked — which I never asked for any album, any concert, anything I’ve ever done in my life — was, “Who is this movie for?” Baby boomers, I knew that was my sweet spot. And millennials are about to turn 40. So I was like, “OK, there’s reach there.” But when I got to Gen Z, I was grasping at straws. There was a moment where I just thought, “Drake is following me. So maybe I can DM him and get him to talk about his uncle playing bass with Sly Stone.” Like, that’ll be my one Hail Mary pass.

And then a weird thing happened, and that’s called life after March 2020, where you couldn’t tell the difference between what was happening in real time, in 2020, between George Floyd and our stock footage of 1969. And suddenly, it hit me. You don’t have to pander to Gen Z, because they’re living in these exact same conditions right now. And so this story basically just told itself. Timing was everything for this film. Everything.

Joshua Pearson, who edited the movie, said its rhythms were influenced by the Bomb Squad. Do you see it that way?
With every Roots album, I’m like, “OK, this is gonna be our Bomb Squad tribute record.” And it doesn’t wind up being that. But, I think, with this particular project, I was saying to myself, “OK, let me make this one normal. And then when I do the second one — when I do Sly and the Family Stone — that’s going to be my A Nation of Millions, where I’m really going to push the pedal.”

But once the film ended, [producer Joseph Patel] was like, “No, this is kind of radical, this might be A Nation of Millions.” I just didn’t realize that it was so radical, because people kept talking about the rapid-fire editing. It’s just normalized to me, because I grew up with the Bomb Squad, I grew up where you had to cram 30 samples in one song. 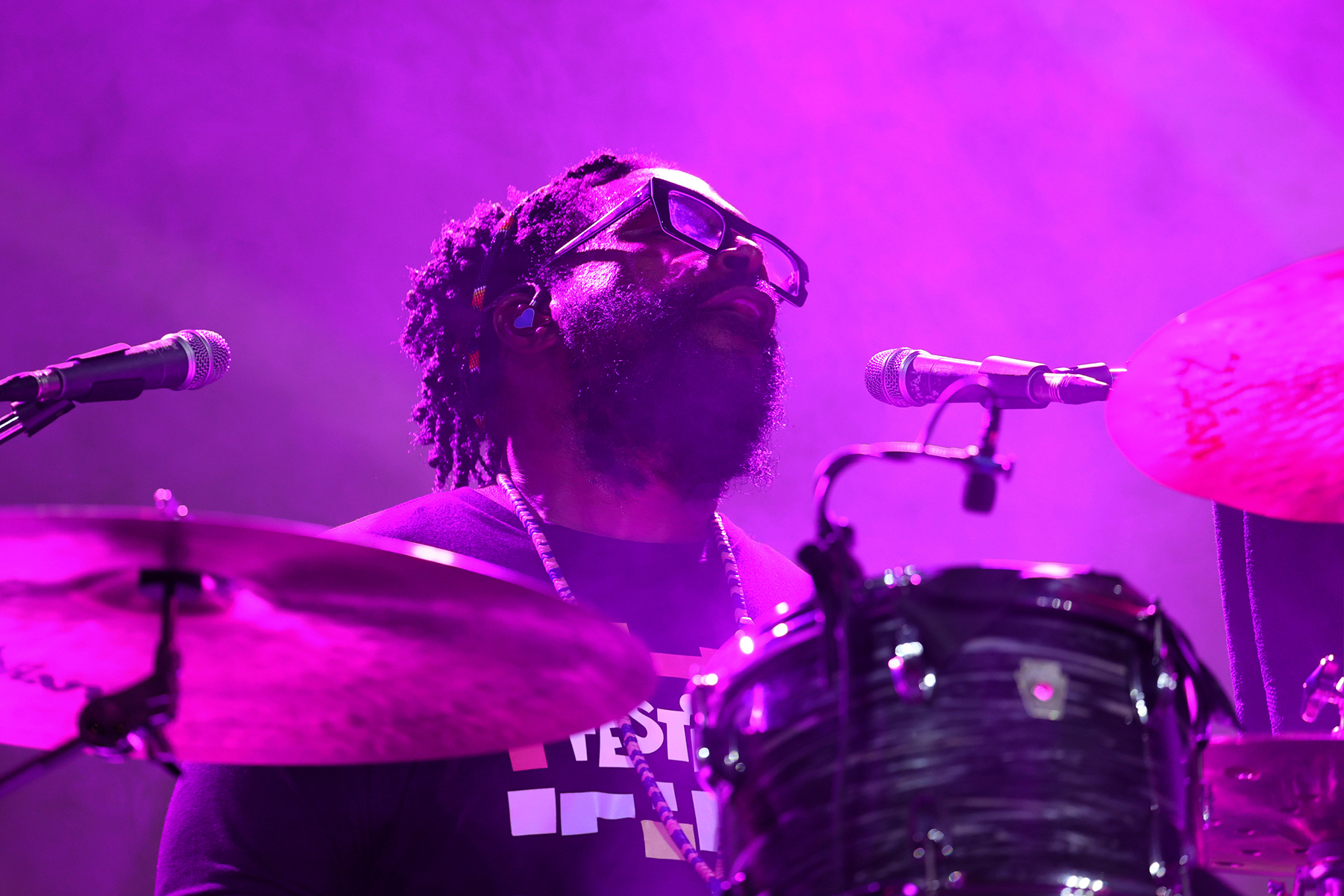 You’re someone who has literally blindfolded yourself to try to play drums more like Stevie Wonder, so to see a Stevie drum solo at the beginning of this movie felt very Questlove. Was that a deliberate sort of signature left on the film?
That’s another result of timing. March 16, 2020, was really an important day on the calendar for this movie. Everything was on the table.  So no more Harry Belafonte, no more Chambers Brothers, no more Mavis Staples, at that point. We had totally wiped off the table. And I was almost at the place where I was like, “No more movie. Maybe we’ll wait for the 55th anniversary [of the Harlem Cultural Festival].” Like, “Do we just put this on ice until Armageddon is over?” And everyone’s like, “No, we persist.”

So now I’m on a farm with my girlfriend, who had befriended these people who have a nice spacious farm. And so I’m getting feedback from this family. And the patriarch of the family, David Zander, says, “Yo, where are you in this film? How do I know this is a Questlove joint and not just another Ken Burns production?” And I remembered what a moment it was to see that drum solo [in the raw footage]. And I was like, “OK, this is probably where I do the ‘Show me this is your movie’ moment.” That was my presence in the film.

Right before the Harlem Cultural Festival, there was an Isley Brothers-led festival at Yankee Stadium, which was also filmed. Are you familiar with that one?
Even before this film, I’m the guy that was combing through YouTube to see any solo performance before 1979. And it’s almost so scarce, but I was like, “There’s got to be at least 100 concerts that have been properly documented.” And, yes, that [Yankee Stadium] footage is out there. That project is being discussed. I’ve been approached!

Doc Severinsen was a successful musician, but he wasn’t an award-winning documentarian. At what point does the Fallon gig [with the Roots on The Tonight Show] become incongruous with the rest of your life? Or do you just see it as fitting in forever?
I mean, nothing’s forever. Currently, it’s not in the way of my creativity. And I don’t even see it as Fallon, more than I see it as I’m still a student at 30 Rock University. And I don’t waste a second when I go there. I’m always learning from our show; I’m constantly on the eighth floor at SNL when SNL is in season. I’ve bugged [producer] Steve Higgins a gazillion times: “Can I be an intern up here?” It’s fascinating to watch that machinery work. I personally want to hang onto it until it is time to…

You know, everyone has that moment in life. The Roots were at that moment in 2008, where it’s like, “Wait, you want to give this all up for something unknown?”
If anything, I’m kind of a rolling stone. And my curiosity is my North Star. I’m a cat dad now. So I might want to be a veterinarian soon. I don’t know!

You’ve written about DJ’ing at a post-presidency Obama party: You spent years putting together a playlist that told an elaborate historical story, and Obama himself told you to put on something the kids could dance to. How shattering was that for you?
“Play something from this century!” [Laughs.] One day, you get checked. And it’s up to you whether or not you choose to listen and adjust. I had never done a project that I worked so hard on, that I thought was perfect, that just absolutely, utterly failed. I stopped DJ’ing for eight months. I was depressed. I could just stay stubborn and be like, “Yo, dude, I’m fucking Questlove. I know what I’m doing.” Or I can listen. And I listened to my ledge talkers, who were like, “You’re not going to throw your DJ career away just because you have one bad gig.” Oftentimes, if we’re meeting an audience that we don’t understand, we tend to try to ignore them until we can’t anymore. And I decided I might have a fear of kids. So I was like, “All right, I’m gonna face my fears and DJ for kids only.” So then, after that, I started doing Saturday-afternoon DJ gigs for kids and their parents.

What’s your vision for the Sly and the Family Stone documentary?
There’s so many angles to go to. But for me, Sly is the origin of what we truly call the troubled artist. You know, what happens when you try to force a square peg into a circle? This project came to me in the weirdest way, because when we were editing and working on Summer of Soul, I know that in 10 days [after the 1969 performance captured in the film], Sly’s life is going to change with Woodstock. You’re going to be God, and this is going to be the most hellish two years of your life. We framed [Sly’s 1971 album] There’s a Riot Goin’ On as a masterpiece. And, yes, it changed music. But I consider There’s a Riot Goin’ On the first reality show. This is you watching someone have a meltdown. Clearly something isn’t right, and we’re willfully ignoring it because the music sounds so good.

But masking our emotions in our art is nothing new for Black people. And so I feel like this movie is going to answer a lot of questions about artists that we have today. This is going to answer why blah-blah-blah gets arrested a lot; why they gave up early and you haven’t heard from them; why they took seven, eight, 20 years to make a follow-up record; why their time management is always crazy; why they have a drug habit. That’s what I truly want to uncover here. I want to humanize the story. 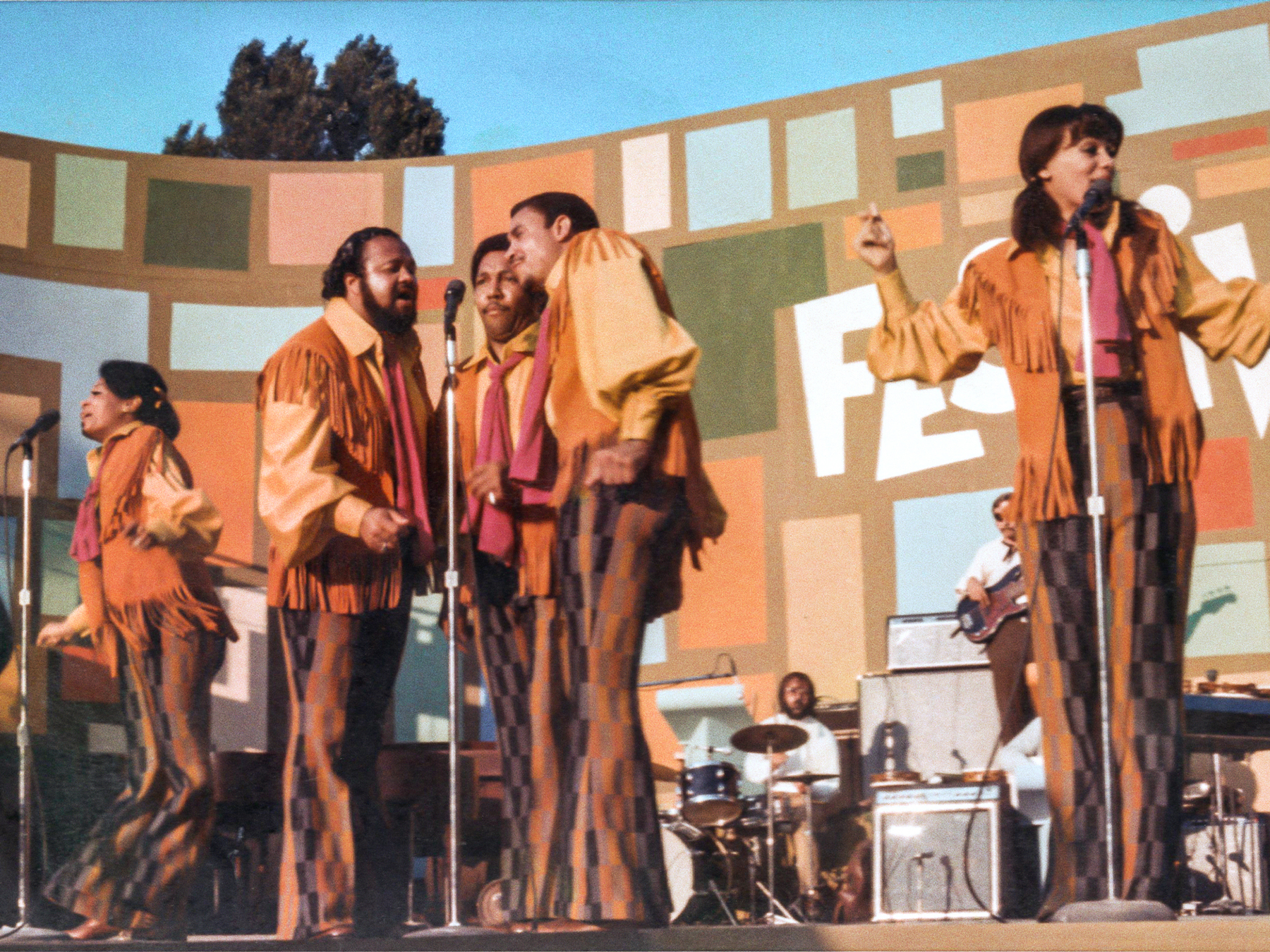 The 5th Dimension in the “Summer of Soul” doc. (Photo: Searchlight Pictures)

Have you started talking to Sly himself?
What really reeled me in was the fact that his interview was done before I came aboard. He did about seven hours of interviews. He’s clear and concise, and he revealed a lot that I didn’t know about. I didn’t realize the influence he had as a DJ in the Bay Area.

It’s been seven years since the last Roots album. What’s the status there?
Richard Nichols, our manager and producer, was somewhere between George Martin, Brian Epstein, Peter Grant, Suge Knight, and Dr. Dre. Rich was everything. I didn’t know how creative I felt after 2014, when he passed away. His last hurrah was [the previous] Roots record. At the time, I felt satisfied, like, “OK, well, we could stop at number 16 and just call it a day, and I’ll do other things.”

But the one thing Rich was a master of was telling us to stop and turn the damn record in already. Right now, there’s easily 700 drafted ideas. Some songs completed. Some songs half-baked. But, I mean, what are the 14 songs [among] the 700 songs that we can’t stop creating? So I promised my manager that I will not do any more new ideas after Dec. 31. So, come January, we’re going to mix this baby, and it’s going to be out in the first half of 2022.

I know you love Peter Jackson’s Beatles documentary, Get Back. Is it hard not to think of all the other stories that need to be told as you watch it, though?
The most beautiful thing about the documentary is it shows the true way that creativity starts is you have to go through old ideas. When I did the Voodoo album with D’Angelo, the first thing we did was say, “What Prince album are we going to do right now?” We would just go through every Prince song, and then it’s like, “Wait, repeat that part.” And then you change the key, slow it down a little bit, and the next thing you know, a new song is born.

And you see Paul McCartney do that. He goes to old Beatles songs or old Tin Pan Alley. And John Lennon, he is either referencing Little Richard or Chuck Berry. The reason that’s super important for the world to see is because I know the framing of hip-hop is as “that’s not real music. They’re just taking other music and claiming it as their own.” So what we just watched [the Beatles do] for those nine hours, that’s hip-hop. That’s them using other songs to spark an idea for another song. So finally, you get absolute proof the world’s most loved band did their version of what Pete Rock and DJ Premier and J Dilla always did, which is you take old records, and you try to make them into new records. And that, to me, is the important lesson in it all.