Haley Dahl took the stage at Austin’s Mohawk bar on March 16 dressed like a witch from folklore, which checks out, considering her band Sloppy Jane’s recent album Madison was recorded in a cave. She stood head to toe in royal blue, her velvet suit’s sharp shoulder pads providing a trusty hook for her cape to trail behind. And when she shed this elaborate outfit — stripping down to torn fishnet tights — her old pal Phoebe Bridgers arrived to help her scream.

Bridgers, who started her career as a pre-fame member of Sloppy Jane, joined Dahl for “Where’s My Wife?,” a punk thrasher that mostly contains that one line yelled repeatedly. Bridgers rolled around on the ground in her gray Gucci suit, her space buns somehow staying perfectly in place as she attempted to get on Dahl’s shoulders (it did not go well). The duo kept chaotically looking around for this missing wife, but they couldn’t help but break character and beam at each other.

When the song finished, Bridgers didn’t go too far, taking her place on the right side of the stage for most of the showcase for Saddest Factory Records, the Dead Oceans imprint she launched in late 2020. Bridgers knew nearly every song the four acts performed, singing and dancing along like a proud parent at an elementary school dance recital. 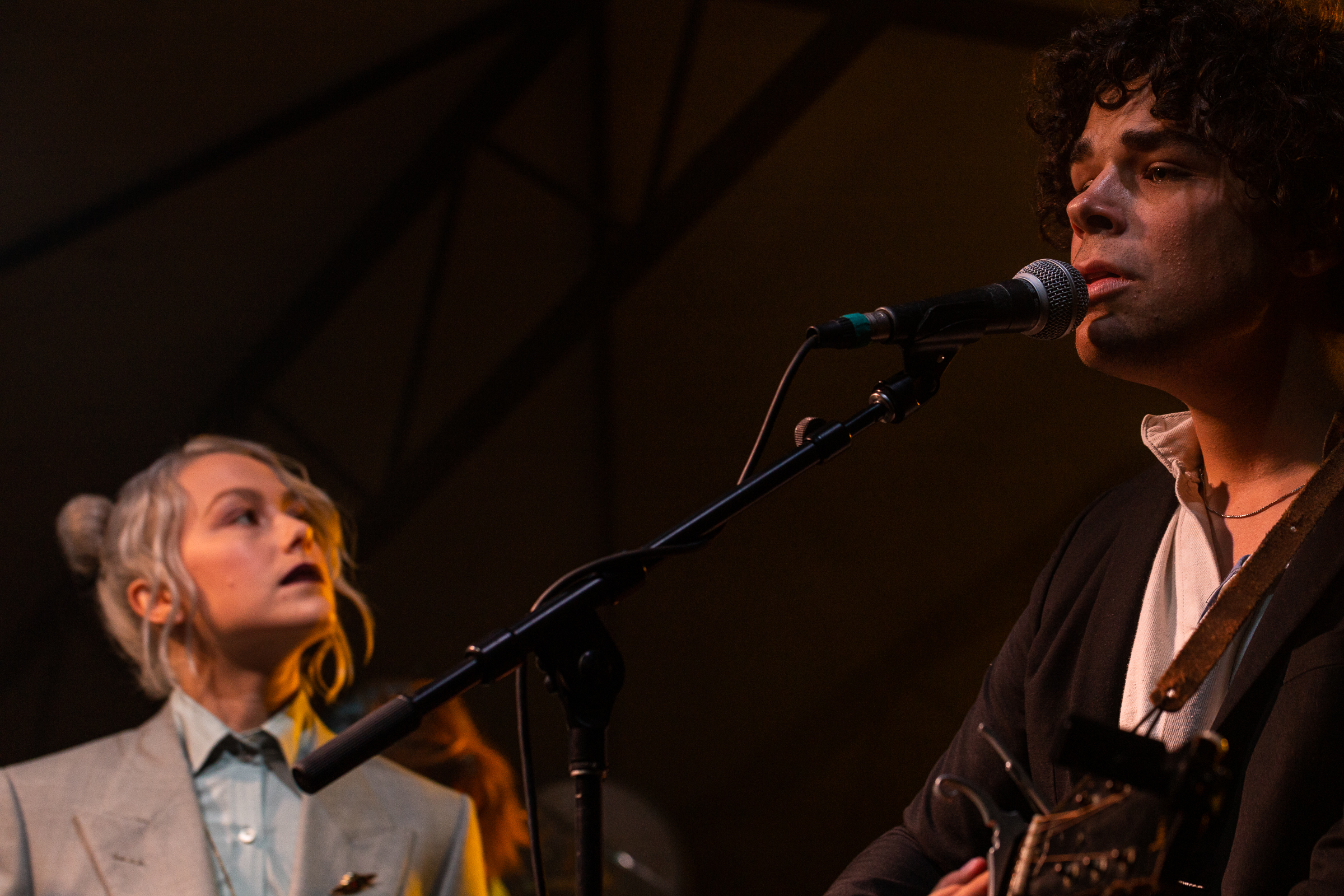 Bridgers appeared onstage at the end of each set to lend a hand, kicking off with the 21-year-old Charlie Hickey. She signed the singer-songwriter last August, and his full-length debut, Nervous at Night, arrives on May 20. Hickey told the crowd that he and Bridgers both grew up in Pasadena; he met her when he was just 13 years old. But these signees aren’t just her friends. With Saddest Factory — a tongue-in-cheek take on the industry term “satisfactory” — she’s just trying to provide the label she wishes she had when she was starting out. “I don’t think I have any ethos other than, ‘Am I jealous?’” she has said.

Gin Pham, the communications and outreach manager of the Transgender Education Network of Texas, stood at a table to provide resources. Pham told Rolling Stone that transgender youth in the state “are being threatened right now to be taken away from their families. So one huge thing that we’re trying to do is not only ensure that that doesn’t happen, but we’re also ensuring that these kids know that they’re supported.” 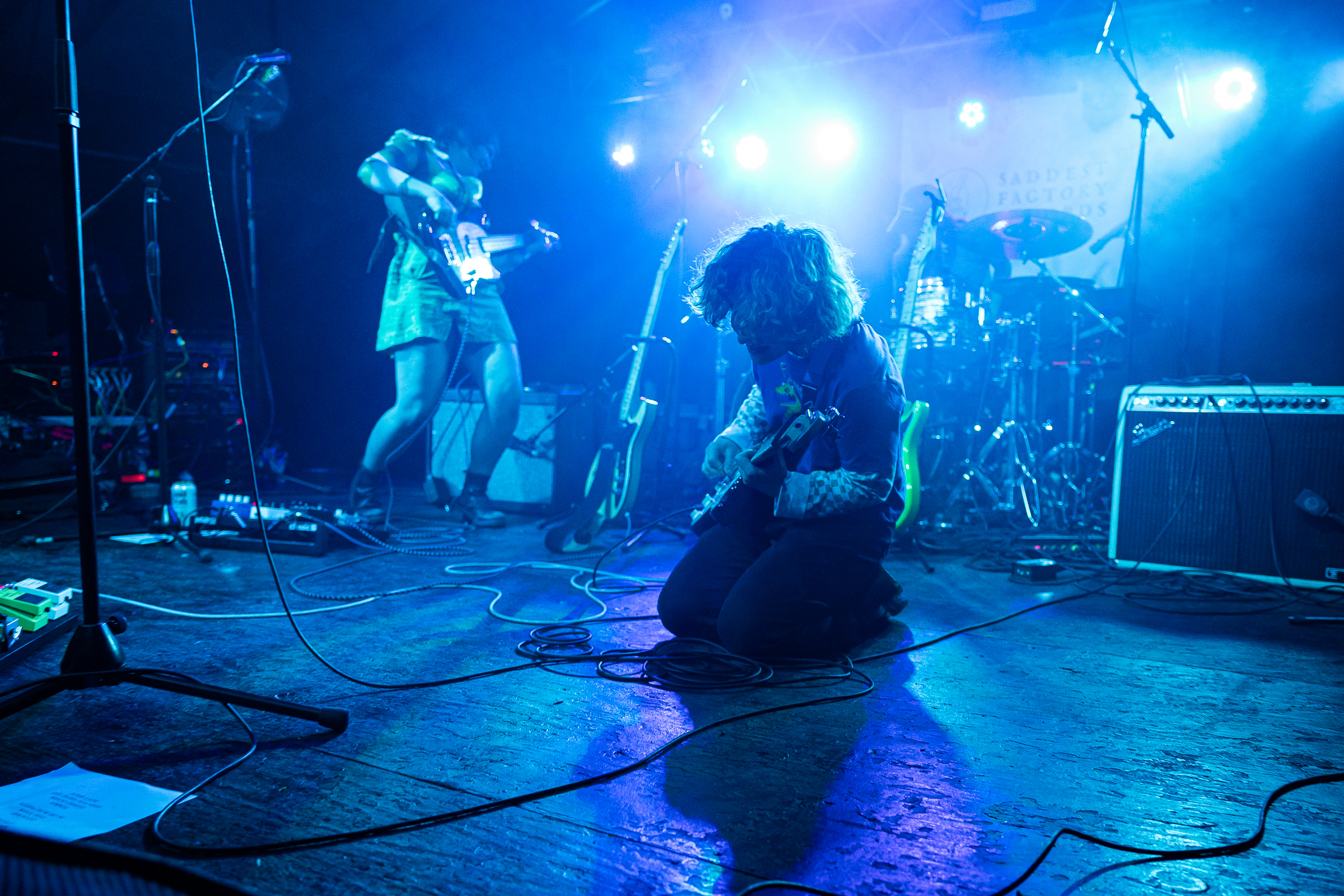 Bridgers and Hearon also called to the stage Greg Casar, a progressive Democrat currently serving as the nominee for Texas’ 35th congressional district. “The stakes are high here,” he told the crowd. “They’re high here in Texas and all over the country, because right now in our state, abortion is virtually banned for working-class and low-income people. Because here in the most uninsured state in the country, we have kids dying in foster care, in a state with so many low-wage jobs, because we have so much corporate power. Our governor, instead of choosing to fix that, is choosing to bully and target trans kids and their families. And they don’t only want to do that here, they want to spread that all over the country. They want this to be the laboratory for spreading it to other states. Are we okay with that? I want to hear, ‘Hell no.’”

After some difficulties with sound, Claud — the first signee to Saddest Factory — performed songs from their recent album Super Monster, fittingly in a Reptar shirt.

It was 1 a.m. by the time Muna arrived, but the anticipation was so high that the energetic crowd didn’t seem to care. “Thank you for staying up with us,” Katie Gavin said in a burnt orange two-piece suit, flanked by Naomi McPherson on guitar and keyboards and Josette Maskin on bass.

The indie-pop trio blew through fan favorites like “Stayaway” from 2019’s Saves the World, while performing the unreleased “Kind of Girl” from their upcoming Saddest Factory release Muna, out June 24. It was obvious what they would close with, with Maskin even teasing the audience, “Who here thinks it’s ‘Silk Chiffon?’”

Before Bridgers took the stage for that triumphant finale, Gavin took a moment to thank her and the label that’s giving these acts a place to be heard: “They’re changing our lives, bitch.” 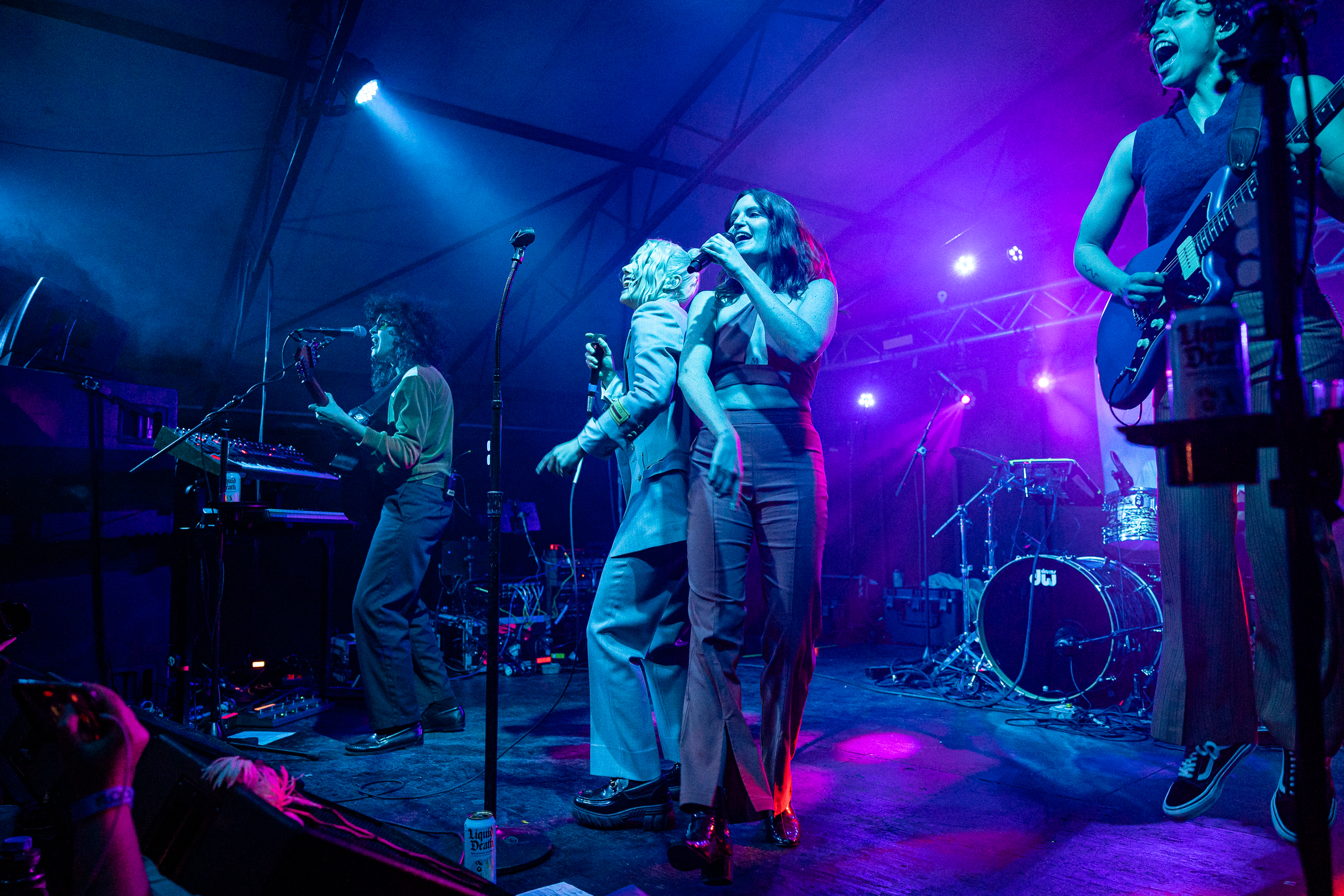 Phoebe Bridgers joins Muna for “Silk Chiffon” to close out the Saddest Factory Showcase at the Mohawk. (Photo: Griffin Lotz for Rolling Stone)