Near the end of a November show at Dallas listening room the Kessler, singer-songwriter Joshua Ray Walker threw the assembled crowd for a loop when he brought out his friends Ottoman Turks for a surprise three-song set of furious, fast-paced Texas punk. Walker plays lead guitar in the band when he’s not performing solo, and their kinetic performance was the polar opposite of the traditional country and hushed ballads he had just finished singing.

The looks on the fans’ faces said it all. 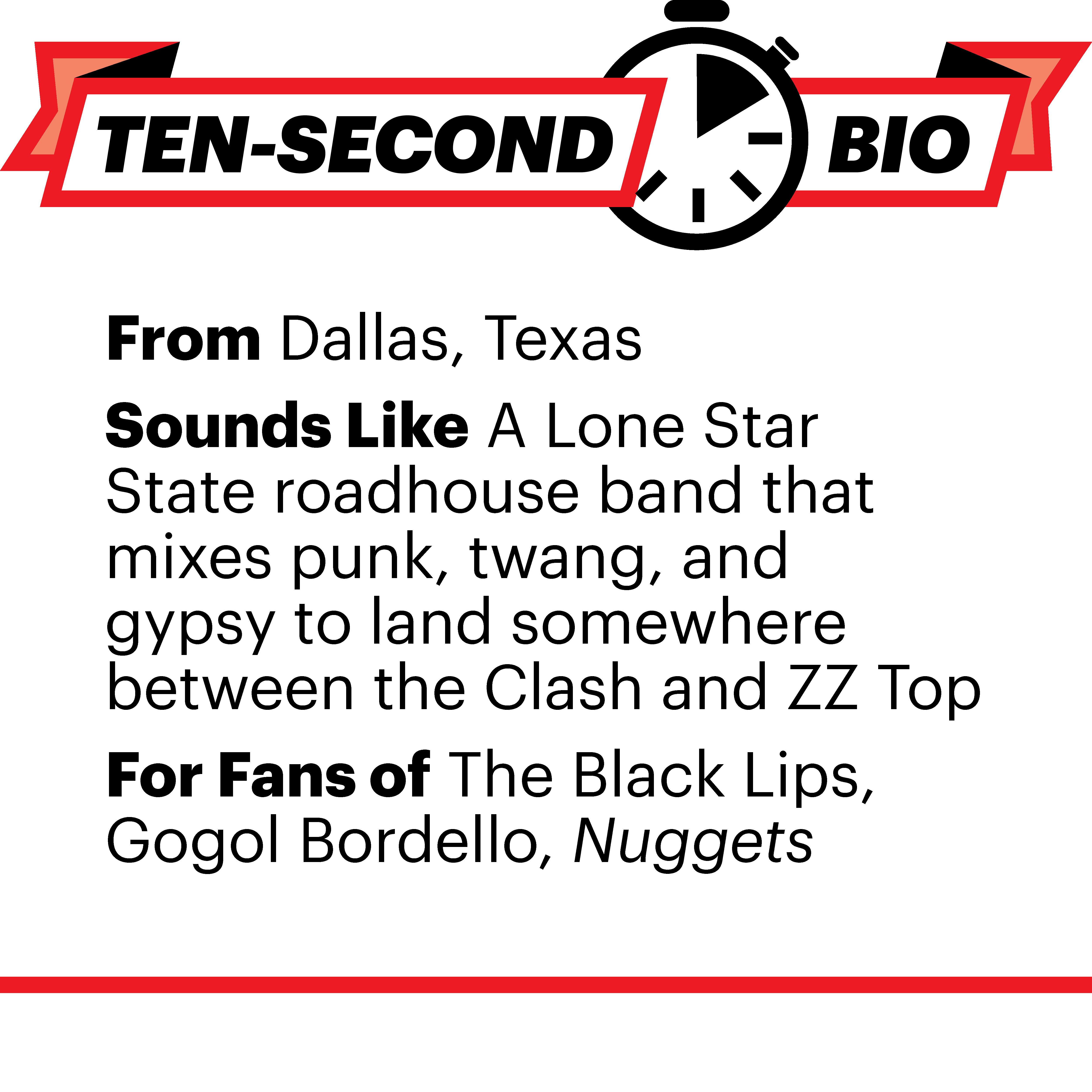 “You could tell they weren’t expecting it, and they didn’t get it. We were very loud,” says Walker, whose 2019 album, Wish You Were Here, and its vulnerable song “Canyon” endeared him to an Americana audience. “But by the end, people were into it. I have never walked away from an Ottoman Turks show where we played our best and didn’t make fans out of everybody in the room.”

Made up of Walker, singer Nathan Mongol Wells, bassist Billy Law, and drummer Paul Hinojo, Ottoman Turks began a decade ago, when Wells needed a vehicle for the solo material he’d been writing and recording in his parents’ bathroom. “If you sit on the toilet and you pull the drawer out by the sink, you can put a computer there. It’s almost like a workshop with a vocal booth,” says Wells.

Having lived in the Middle East as a kid, Wells was shaped by cultures well outside of his native Texas. He became enamored of the Mongol Rally, a Eurasian road race, and gave himself “Mongol” as a middle name; upon returning to the region on a study-abroad program, he’d spend days riding around Jordan on a bus listening to Tom Waits. “I put his whole discography on my iPod and soaked myself in that,” he says. “I was learning about the Middle East, but was also listening to the American canon.”

When it came time to name his band, he thought back to a trip to Turkey. “It’s a clash of cultures there, as they sit between the Middle East and Europe,” he says. “The band’s name represents this weird union of things I wanted to do, from jazz to country.”

After gigging around Dallas, Ottoman Turks added Walker as lead guitarist in 2012, and their rowdy onstage antics — ripping never-to-be-duplicated-again solos, downing shots, crowd surfing — made them a draw in the city’s Deep Ellum neighborhood. Last summer, they finally got around to releasing their debut album, a self-titled record produced by John Pedigo (Old 97’s) that captures the Turks’ wild abandon.

It also lays bare the group’s influences, which range from Waits and Hank Williams to the Clash and the gypsy rock of Gogol Bordello. As guitarist, Walker draws on the atmospherics of Jack White, the crunchy riffs of Texas holy trinity ZZ Top, and even some metal shredders. “There are some Lamb of God riffs that probably get worked into the Turks songs,” he says.

Wells describes the band’s mish-moshed sound as “outlaw-country-garage-rock.” “Our bassist coined the term, which sums it up really well.”

The first three tracks on Ottoman Turks are a good representation of the band. “Apathy” is a melodic slice of singalong jangle-rock that evokes the Black Lips and the Nude Party. “Snake Song,” the Turks’ standard show closer, rumbles along with Hinojo’s frenetic drumming and Wells’ snarling vocal. “Glass Bottles” nods to the foursome’s country roots.

” ‘Glass Bottles’ is what we sounded like for the first three years I was in the band, before we got heavier,” says Walker. “We wanted to be a country band, but we realized none of us were good enough musicians to pull that off. So we got louder and faster and turned into what we sound like now.”

That loud and heavy approach distinguishes Ottoman Turks — and peers like Ramones-meet-mariachi band the Vandoliers — from other Texas acts, many of whom reside in the dusty vibes of the Red Dirt scene. But Wells says they go over well with that crowd, too. “We’ve been put on some weird bills, but we have just enough of whatever it is that it kind of works. Maybe it’s just that there’s a Texas element to it,” he says. “It’s more of a blood thing than a sound.”

With the release of their long-gestating album (all of it written by Wells), the Ottoman Turks are plotting a U.S. tour. A cruel irony, though: The solo success of their own guitarist is making it challenging to book dates. “For a long time, Ottoman Turks was the more successful piece of the puzzle,” Walker says. “I’d work my solo shows around their schedule. Now, it’s more complicated because both projects are doing well.”

In some cases, like at the Kessler, they share the stage together, and when they do, Walker is adamant that Ottoman Turks always close the night. Both the group’s unhinged performances and visceral sound scratch an itch for him that his solo career cannot.

“What I do is really personal,” Walker says. “I love those shows, and it’s created some of the most amazing musical moments I’ve had as a musician. But I can’t do a minute-long slide-guitar solo and then smash a guitar at one of my shows. I get to do that with Ottoman Turks.”