Mick Jagger got a call from his label recently with some news: While working on a reissue of the Rolling Stones’ 1973 album Goats Head Soup, the crew found some unreleased tracks. “I remember thinking, ‘Oh, no,’” Jagger says. “Unreleased tracks, to me that always means a lot of work. It’s like, ‘Things that you didn’t like and didn’t finish!’”

Jagger’s mind changed when he heard the music. “Actually, it’s not bad at all,” he says. Soon, isolating at his home in the European countryside, he wrote new lyrics to “All the Rage,” a rocker he’d started writing 47 years earlier. “You finish [tracks] like you would if you recorded them last week,” says Jagger. “ ‘Where are my maracas? Surely I must have my maracas around here.’”

Goats Head Soup emerged from a period of deep uncertainty for the Stones. After their successful tour for Exile on Main Street, they’d splintered across the world; a few months later, in late 1972, they reconvened in Kingston, Jamaica, to cut a set of dark grooves that sounded like nothing they’d ever released. There were drony experiments (“Can You Hear the Music?”), strung-out ballads (“Coming Down Again”), and snarling rockers (“Dancing With Mr. D”). Critics didn’t like it at the time, and the Stones quickly dropped many of the songs from their live set. “It’s not an album that’s revered as much as Exile on Main Street in people’s minds,” says Jagger. “I suppose including me.”

Keith Richards remembers exactly where he was when he started writing the album’s biggest hit earlier that year: in the bathroom of a rehab clinic in Switzerland, where he’d gone to kick his heroin addiction. After three of the most painful days of his life, a melody came to him and grew into “Angie,” a tender ballad inspired in part by the name of his newborn daughter with Anita Pallenberg.

Jagger knew “Angie” was a hit as soon as he heard it while visiting Richards in Switzerland, where he’d arrived with his own set of songs. After a decade of close collaboration, Jagger and Richards were living in separate countries. Richards had fled Nellcôte, his home in the South of France, due to a drug bust; the bandmates’ U.S. visas had expired; and they could no longer live in England due to tax issues. “When we cut Exile, we were still in each other’s pockets,” Richards says. “By the time of Goats Head, Mick had married Bianca. Charlie was living in France. In other words, we had become exiles. We were all over the place. Mick and I had to learn to write stuff apart.”

They chose to record in Jamaica in part because “it was one of the few places that would let us in,” Richards says, not entirely kidding. With Billy Preston joining them on piano, the band “worked like maniacs” from midnight to 10 a.m., says Richards. Jagger jokes that the Stones may be the only band to make an album in Jamaica with “not the slightest influence of reggae on any of the tracks.” Instead, he notes the funky combination of Richards’ and Mick Taylor’s guitars with Preston’s electric piano: “The fashion at that time was playing that clavinet with the wah-wah stuff,” he says. “It’s not Herbie Hancock, but it gives it that certain push.”

The Stones knocked out the basic tracks for Goats Head Soup in a week. On the new box set, you can hear them let loose on an instrumental jam for “Dancing With Mr. D,” featuring guitarist Mick Taylor’s piercing slide attack. There’s also an early version of “Heartbreaker,” featuring Preston and pianist Nicky Hopkins pounding away over the song’s hypnotic horn line. “Of course Billy Preston was in there, as well as Nicky Hopkins and Ian Stewart,” Richards says. “We had this funk thing going that hadn’t dawned on me so much until I re-heard it recently.”

The sessions had a spontaneous feel: “A lot of tracks weren’t worked out much before we got in there,” Richards adds. “Some of them are maybe an hour old.” One of his favorite songs is “Winter,” which he calls “a Mick beauty.” Jagger wrote the song about missing a lover while stuck in the countryside. Taylor, who left the band a year later, provides a searing, melodic solo. “I always liked the way Mick picked out those pretty melodies around the tunes,” Jagger says. “He was very good at that sort of thing.”

The next summer, when Goats Head came out, “Angie” went to Number One, putting the Stones back on the charts alongside David Bowie and Elton John. Jagger told Rolling Stone at the time that the new album was more focused than Exile, but he won’t go that far today. “I say stupid things like that when I’m promoting albums,” he says now. “You gotta take that with a pinch of salt.”

Richards sees Goats Head as the beginning to an important chapter in his life, when he fell in love with Jamaica. “That was ’73, the year Marley and the Wailers put out Catch a Fire. That’s also the year the soundtrack of The Harder They Come came out. I remember being in Jamaica, there was a feeling in the air. Jamaica was starting to make a mark on the map. After the sessions, I just moved back and I stayed there for months.” Richards bought a house on the island’s north coast. “And that’s where I met all the guys and eventually turned up on the Wingless Angels,” he continues, mentioning the reggae group he’d go on to release an album with in 1997. “It became my second home, you know.”

When 2020 began, the Stones were looking forward to a big tour. With those dates off due to Covid-19, they’ve been staying busy in other ways. At his home in Europe, Jagger has been working on documentary projects, plus writing new music and keeping in shape. “I’ve been singing quite a lot, and I’ve been exercising quite a lot, so I’m keeping that bit together,” he says. “I’m not in such a bad position. Can’t feel sorry for yourself. But yeah, I miss performing.” 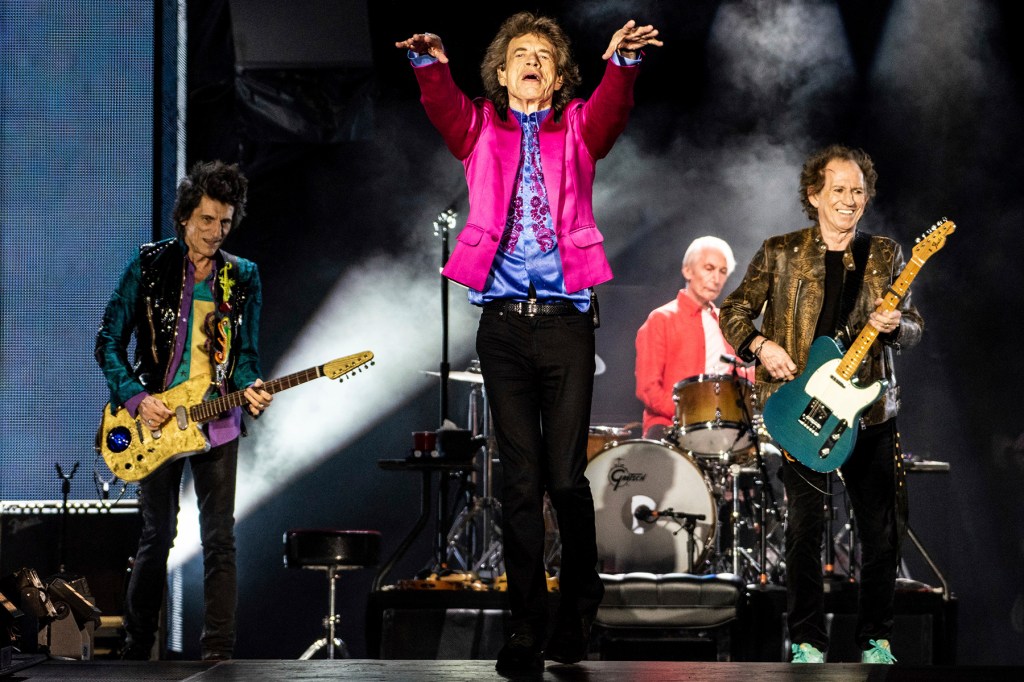 “I really enjoyed that last tour, it was a great trek,” Richards says of the band’s 2019 dates, which came just weeks after Jagger had heart surgery. Still, the singer proved he was in top form, and the band played rarities like “Harlem Shuffle” and “She’s a Rainbow,” ending the tour with a dramatic, rain-drenched gig in Miami. “I was very disappointed in March when we said, ‘Uh oh, this thing’s looking bad,” Richards says. “A week later, they started to say, ‘We’ll cancel the first few gigs.’ And I said, ‘I have a feeling. Nah, this thing’s too big for us. It’s too big for anybody, you know?”

The guitarist has been hunkered down at home in Connecticut this summer. “It’s not very often, we do go drift out and stop by a sidewalk cafe,” he says. He, of course, wears a mask. “Oh yeah, I’m a masked man,” he says. “I mean, it’s what you have to do. I wear mine in bed!” He’s been listening to Bob Dylan’s Rough & Rowdy Ways (“Bless old Bob. I mean, I love his new album, man”) and working on new music himself. In late April, the Stones released “Living in a Ghost Town,” their first original release since 2012. “We had it in the can,” Richards says. “I spoke to Mick around March. I said, ‘Hey man, if there’s a time to put this one out, it’s now, you know.’”

Jagger says that song “was part of a group of songs we’d recorded quite recently. It just seemed to fit the times. When I went back to my lyric book and looked at it, it was a song about being a ghost after a plague. Obviously I threw in a few more current lines, and then redid some of the vocals and I redid bits of my guitar and stuff. Now I’m singing on some of the other ones that we did from that time period, finishing those off, too.”

The band is considering putting those songs out soon. “I think we have five, six, or seven tracks we’ve slowly been putting together,” Richards says. “Right now, seeing if this thing’s going to go on, maybe we should think about putting them out in another way.”

Jagger wonders about future of live music, especially in the U.S. “The larger point, really, is — in the short, medium, and long term — how is everyone that performs live going to function in the future? We don’t know. In Europe, we’ve had small-scale concerts. We’ve had socially-distanced concerts. You can see [concerts] starting in some parts of the world — New Zealand, Australia and so on. But … as far as the U.S. is concerned, we don’t really know what the future holds. So many people are out of work, losing money. Is it ever going to be the same again? Will it be always different? We just don’t know at the moment.”

Jagger says he’s looking forward to stepping onstage with the band again, whenever it happens. “We might be playing to very few people,” he says. “Even though we might be lucky enough to have sold tickets, we might not be able to play to them all at once.” He says he’s open to the Stones playing a socially-distanced concert: “Yeah, I suppose if that was the way of the world, of course.”

Richards has his eyes on the future, too. “I hope, like everybody else, there’s a very good vaccine as soon as possible,” he says. “And a change of regime wouldn’t be bad. Let’s leave it at that, man.”

Retirement is still not an option for the band, he adds. “You might call it a habit,” he says of playing live. “I mean, that’s what we do. And also there’s that thing between us, like, ‘Who’s going to be the first one to get off the bus?’ You have to be kicked off or drop off, right? So it’s like that. I really can’t imagine doing anything else.”

In 2022, the Stones will be celebrating the 60th anniversary of their first shows. Richards hopes it’s an occasion they mark onstage. “I hope we’re all there, man,” he says. “It’s something to look forward to.”