It’s 7 a.m. in Venice, and Matt Berninger has already been up for four and a half hours. Why? The National frontman and his wife, Carin Besser, are still polishing up songs for Cyrano, a years-long musical project based on the 1897 play about the life of a 17th-century French writer. Besser, who writes best at night, had been working on the songs until 2:30 a.m., at which point Berninger woke up and spent the dark hours of the morning finishing up what she started.

This type of creative burst hasn’t been all that uncommon for Berninger lately. “I’ve been in maximalist writing mode for a long time,” says the singer. “With no touring, I’ve been writing more and more songs for Cyrano,” he continues, before describing his scattered creative energy. “It’s almost like I can even make more songs for [The National’s 2019 album] I Am Easy To Find. I’m not done digging into all this.”

In the midst of a flurry of half-formed projects (others include a television show he’s been pitching with his brother), the primary focus of Berninger’s concentration as of late has been Serpentine Prison, the album that marks his formal debut as a solo artist. The LP features 10 new songs co-written with a slew of Berninger’s musician friends, including Walter Martin of the Walkmen (“my favorite band”), Brent Knopf (the other half of Berninger’s previous non-National detour, El Vy), and the National’s bassist Scott Devendorf.

The initial idea behind the album was to simply make an elegant record of covers in the vein of Willie Nelson’s Stardust, one of Berninger’s favorite records from his childhood. Ten years ago, Berninger had briefly worked with Stardust’s producer, the legendary keyboardist Booker T. Jones, at a session for Jones’ 2011 solo album The Road To Memphis. So in December 2018, Berninger went to Booker T’s website, clicked on the contact tab, and fired off an email out of the blue to the keyboardist’s daughter and manager, Olivia.

Despite having produced records by everyone from Bill Withers to Neil Young over the decades, Jones, now 75, hadn’t received an offer to produce in years. “Like having a car sitting unused,” Jones says. When the two talked, Jones was sold as soon as Berninger began discussing his love for the mid-century pop standards on Stardust: “That was all the context I really needed.”

But as soon as Jones signed onto the project, Berninger began shying away from the idea of a covers album, instead sending Jones some new songs he had been tossing around with friends. “I was just blown away by the songs he had written,” says Jones. “They moved his vocals through such a range, from very low to high, but the thing that I found most in common with Matt was melody.”

Berninger’s standard creative process involves working with a host of collaborators (most often, National bandmate Aaron Dessner) by either free-writing or reacting to instrumentals that others send him. He conceives of his songwriting as a series of virtual correspondences, and he sees his solo album as merely the latest in the ongoing emotional story he’s been telling for the past 20 years.

“I always write the same thing, no matter who it’s with, what it’s for,” he says. When someone sends him an instrumental piece, “it’s always a different kind of animal that I have to figure out. Aaron [Dessner’s] stuff is like that. He knows to send me, like, a beautiful horse. But sometimes he sends me a dinosaur or an insane owl, and I have to climb and fly. That’s great too. Depending on the person you’re writing with, it’s like learning to dance with somebody you’ve never met. Sometimes it’s like, ‘Oh, we know how to dance the same way.’ And sometimes it’s like, ‘Oh, I’m dancing with an abstract expressionist dancer and all I know how to do is to do the jitterbug.’”

The goal, and the challenge, with his latest collection, was to make a group of disparate, remotely written songs Berninger composed with a half-dozen or so co-writers sound like a coherent musical statement. That process ended up feeling not very dissimilar from making a covers record, after all. “The sketches did feel like orphan children, and somehow Booker needed to take all those and make them feel like they were part of the same family,” Berninger says. “He needed to bring all these orphans into the same house and make them comfortable with each other.”

By the summer of 2019, Berninger and Jones holed up at a Venice Beach studio for two weeks of sessions. Jones, unfamiliar with Berninger’s chaotic network of musician friends who were constantly popping in and out of the sessions, says the experience was a “whirlwind.”

“Matt must have run 15, 20 people by me before I knew it,” says Jones. “I would go, ‘What’s this person’s name?’” Many of those guests found their way on to the album, like Andrew Bird, Devendorf, and, at Jones’ request, Mickey Raphael, Nelson’s longtime harmonica player, who also played on Stardust.

The musicians would convene each morning for a day of unstructured recording and arranging. “It was unlike any other record I’ve ever been on,” says Raphael. “It was a good hang, great vibe, no attitude, just, ‘Let’s make a great record.’”

Jones largely dictated the record’s sound, arranging horns and playing bass, guitar, Hammond organ, and keyboards during the sessions. “Matt gave me some instructions before we got into the studio about the way the painting, for lack of a better word, should be done, but I had a free brush,” says the keyboardist. Through it all, he adds, the goal was to highlight Berninger’s baritone, which Jones compares to bygone American singers like Brooke Benton and Tennessee Ernie Ford.

Jones, like Dessner, is steeped in musical theory, providing an effective contrast to Berninger’s intuitive pop-first sensibility. Jones points to songs like “Holes,” a Mercury Rev cover from the sessions that ended up being released as a charity single, and “Silver Springs,” a duet with Gail Ann Dorsey, as two of his favorite musical moments. Of the latter, Jones points to the song’s counter-melody as a point of compositional pride: “All the intricacies of what you can do with a chord are apparent on that.”

Serpentine Prison ended up as a straightforward collection of ballads that feels more traditional and smaller in scale than the avant-rock theatrics of the National. “I wanted it to be a classic record of little weird pop songs that felt just simple and cozy,” says Berninger.

The lyrics on this album, he adds, are about the same subjects as more or less every Matt Berninger song. In 2017, he described those themes as: “It’s either: I’m scared, I’m sorry, or I love you. It’s one of those three things, almost always.

“I mean, yeah, everything is either love or fear, right?” Berninger says now. “Fear is the opposite of love. I’m always processing my own fear. When I feel like I have gotten around a certain fear, or at least understood or accepted a certain fear, I feel very loving towards myself and everybody else.”

This idea goes beyond the personal for him. “There’s so much fear, not just here but everywhere,” he continues. “People like to be scared. Every channel on TV is a fear channel, and it’s all creating more and more fear, which is sucking our ability to show courage and bravery and love. I think fearlessness is insanity, it makes no sense. But bravery is leaning into the thing with all your fear and trying to get through it, to the point where you can say, ‘I’m not afraid of these things.’ So, yeah, I feel like I’m always writing about that shit.”

As for the state of the National, Berninger’s arena-filling rock band? The singer has been working with Aaron and Bryce Dessner on the music for Cyrano, and he’s proud of Folklore, Aaron’s recent blockbuster record with Taylor Swift (“I think it’s her best record, for obvious reasons”). When he calls for the interview, he introduces himself as “Matt from the National.” 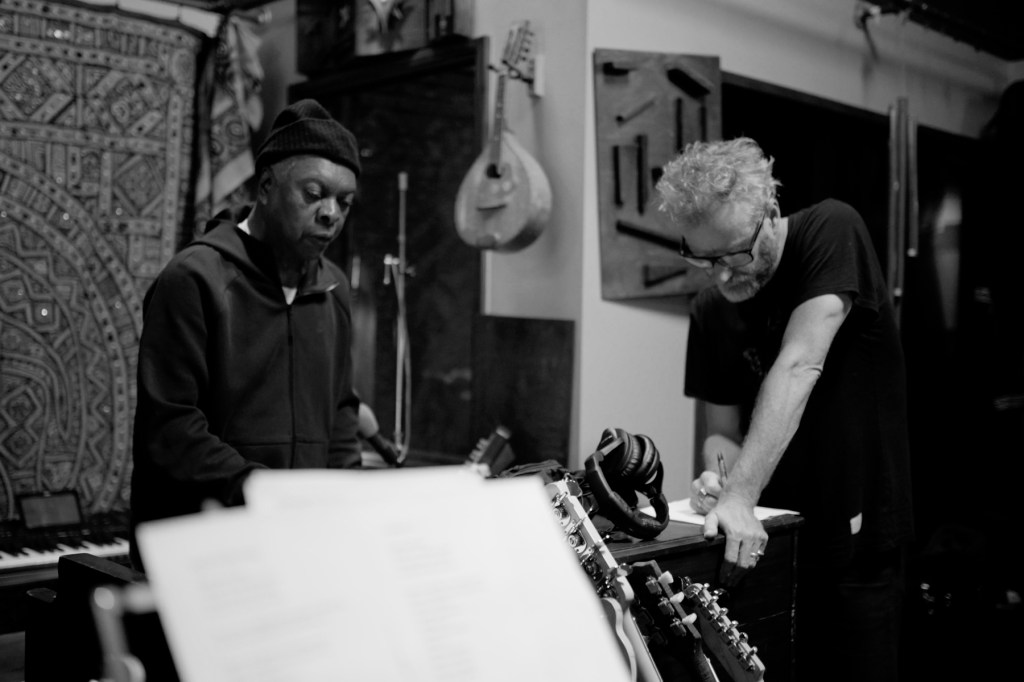 Still, he’s relieved that his main band is taking some time off. “We’ve been talking about taking a break for a long time,” he says. “Everybody’s got so many projects coming out, so this is a time for us to gather new ideas from outside places, and then we’ll bring that back into the band at some point. The National, that bullet train… I think it’s very good for that train to slow down, so we can unpack that train and see if that’s the train we want to be on, and see if those are the directions we want to be in. It’s good to rewire.”

Berninger has enjoyed the process of making Serpentine Prison so much that he’s already begun work on a second record with Jones, sending him new song sketches he’s been working on over quarantine. “I like being solo,” he says. “I mean, with the National, I like being in bands, too. But I didn’t want to start another band.”

Perhaps it’s because he’s been up for almost five hours at seven in the morning, but Berninger speaks rapidly, often in a near stream of consciousness, darting between ideas before arriving at something like a conclusion. At one point, he mentions that he made Serpentine Prison for his father. “I keep saying, it’s not about my dad, it’s just for him,” he says.

What does he mean by that? Berninger has a long answer.

“Stardust was one of my dad’s favorite records, and whenever I hear it, I feel a glow from the inside,” he begins. “It makes me want to put a sweater on, and I feel safe. And that’s because I came from a very loving, very safe family, and I could always talk to my parents about anything.”

Berninger’s mind wanders. “My dad’s a big lefty — he’s almost as far left as I am — but he was born on Christmas. I went to church a lot. I consider myself a really good Catholic, but I still fight with my dad about the Catholic Church every Christmas. He’s got the same fucking birtday as Jesus, and so he never gets any presents, because it’s Christmas. But, so, my dad has a fondness for the Catholic Church and for Jesus, and so do I. Anyway, during Christmas of 2018, we had a fight and were just kind of not talking to each other, and I was in a bad mood. I got my dad gardening tools that year for Christmas. They were actually really nice. But I felt like I owed him something better. That’s what I mean.”