You won’t hear any singing when you put on Let the Festivities Begin!, the debut album by Los Bitchos. However, you will hear yips of joy, party-starting yeahs and woo-hoos, ecstatic chanting, and one anticipatory presong “1! … 2! …” count-off worthy of the Ramones. There isn’t a vocal or lyric on the record, but the sense of shared elation in this ebulliently entertaining new band’s music is communicated in everything they do.

Los Bitchos are a four-piece dance-rock band from London, who take their influences from well-beyond the usual dance-rock template, incorporating Latin rhythms, Turkish psychedelic rock, disco and funk, Sixties surf rumble, and a whole panoply of Eighties guitar styles — from light teeth-metal pyrotechnics to clean, bright Afro-pop-like ripples and dream-pop swirls. It makes for an album that immediately invites you in while also rewarding deep listening.

”Not having lyrics kind of takes away from that focus being on the one front singer of the band,” says drummer Nic Crawshaw. “It kind of spreads that to the whole band. Hopefully, it’s interesting to watch because it’s more about our interactions between the four of us.”

Bassist Josefine Jonsson jokingly points out another bonus: “There’s no lyrics to forget.” 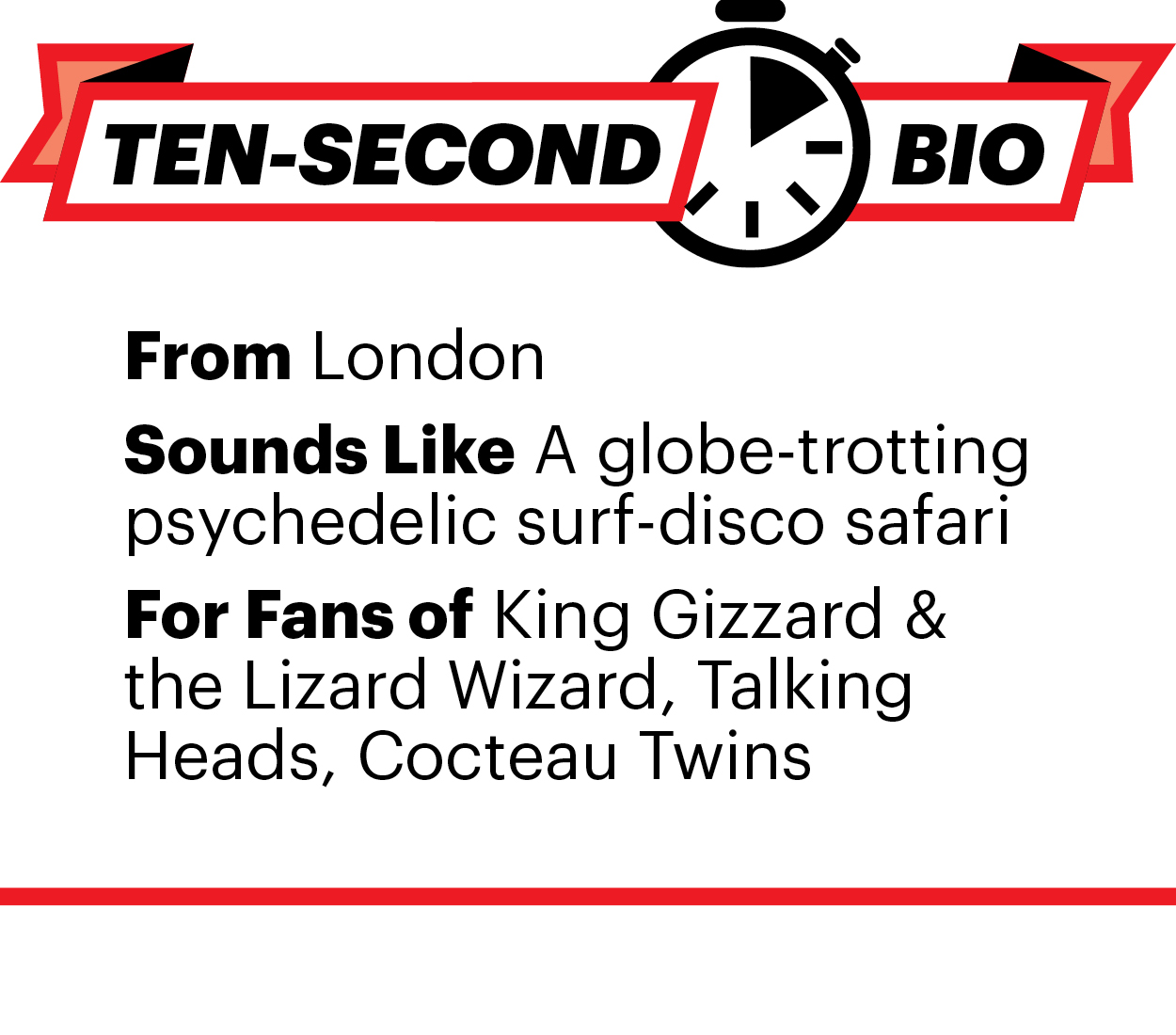 Los Bitchos’ backgrounds are as global and diverse as their sound. Serra Petale, who plays guitar and writes the band’s music, is from western Australia, a teenage drummer who only recently switched to guitar (she’s a huge Eddie Van Halen fan). Jonsson is from a small town in Sweden and brings what the band calls “a touch of out of control pop” to their sound (“Plus,” notes Petale, “she looks like Baby Spice”).

Crawshaw, the only English member, took up orchestral percussion at a young age, and after the prerequisite “massive Radiohead phase” all British youth must inevitably pass through, got into punk rock, playing “a lot of DIY shows and a lot of pretty rough tours around Europe.” The band’s Uruguayan keytar player Agustina Ruiz also has a punk background as a singer. In her 20s, she moved to London to work as a fashion model and met Petale at Moth Club, an East London venue that would serve as home base for Los Bitchos.

“When I met Serra, I was like ‘I want to be in the band that you’re starting and I want to play keytar because people in South America play keytar and I think that’s fun,” says Ruiz, who was drawn to the instrument because of its prominence in Colombian and Argentine cumbia music.

The band got together in 2017 to try to re-create (and ideally reimagine) the “deranged little jingles” Petale had created on Ableton, a music production program. “I always say it reminds me of The Sims, you know, the video game?” Ruiz says of those initial demos.

Adds Petale, “It was pretty clear that this was going to be an instrumental project. The way the demos came out with my extremely limited skills on Ableton actually played a big part in the sound. It’s just like Agustina says, it kind of sounded like a video game, really innocent and very cute.”

Those demos — vocal-less, groove-based, psychedelically freewheeling — were unlike anything anyone in the band had played on before, and learning them took work. ”It was a really fun struggle,” says Crawshaw. “I remember the first show we played, I’d had a couple of rehearsals with Serra. I couldn’t remember the structures of the songs at all because they’re instrumental, and I’d been used to this very punk structure — ABAB … C! — and these were all these noodly songs going all over the place.”

One of their early gigs happened to be attended by Franz Ferdinand frontman Alex Kapranos, who offered to produce their first single, “Good to Go,” a languidly sunny guitar-keytar dialog with a fluid hand-clap beat (he also appeared in the song’s video). Impressed by his wide knowledge (particularly of South American music) as well the large amount of cool vintage gear he’d amassed over the years, they asked Kapranos to helm sessions for their debut album as well.

Kapranos’ experience paid dividends as they honed in on what would become Let the Festivities Begin!. For the stellar opener “The Link Is About to Die,” he helped take a song that was “quite linear,” according to Petale, and added “a little bit of dynamism,” basing his advice on a funky Robert Palmer song from 1980, “Looking for Clues.” For “Las Panteras,” he pushed the rhythm section to tighten the song’s twisty, disco groove. “He’d make me play loads and loads of ideas,” says Crawshaw. “And he’d be like, ‘Yes, that one! Do that again!’ We spent ages getting the feel of the groove spot on.”

Such concussion means that Los Bitchos’ instrumentals never feel overly jammy — at least not in the pejorative “aimless meandering” sense. By design, every song on the album is under four minutes. “We really got into thinking about how to bring out the best in the songs and what type of record this was going to be,” says Petale. “This process of really thinking about each section of the song … what does it bring? Do we want to hear it again? What do we want the audience to feel when they hear it? It wasn’t always an easy process.”

The album ends with its most hypnotically rocking moment, “Lindsay Goes to Mykonos,” inspired by the short-lived reality show Lindsay Lohan’s Beach Club. “We’ve been putting her on the guest list in the hope that one day she might come,” says Petale. “We even tried to message her on instagram.” 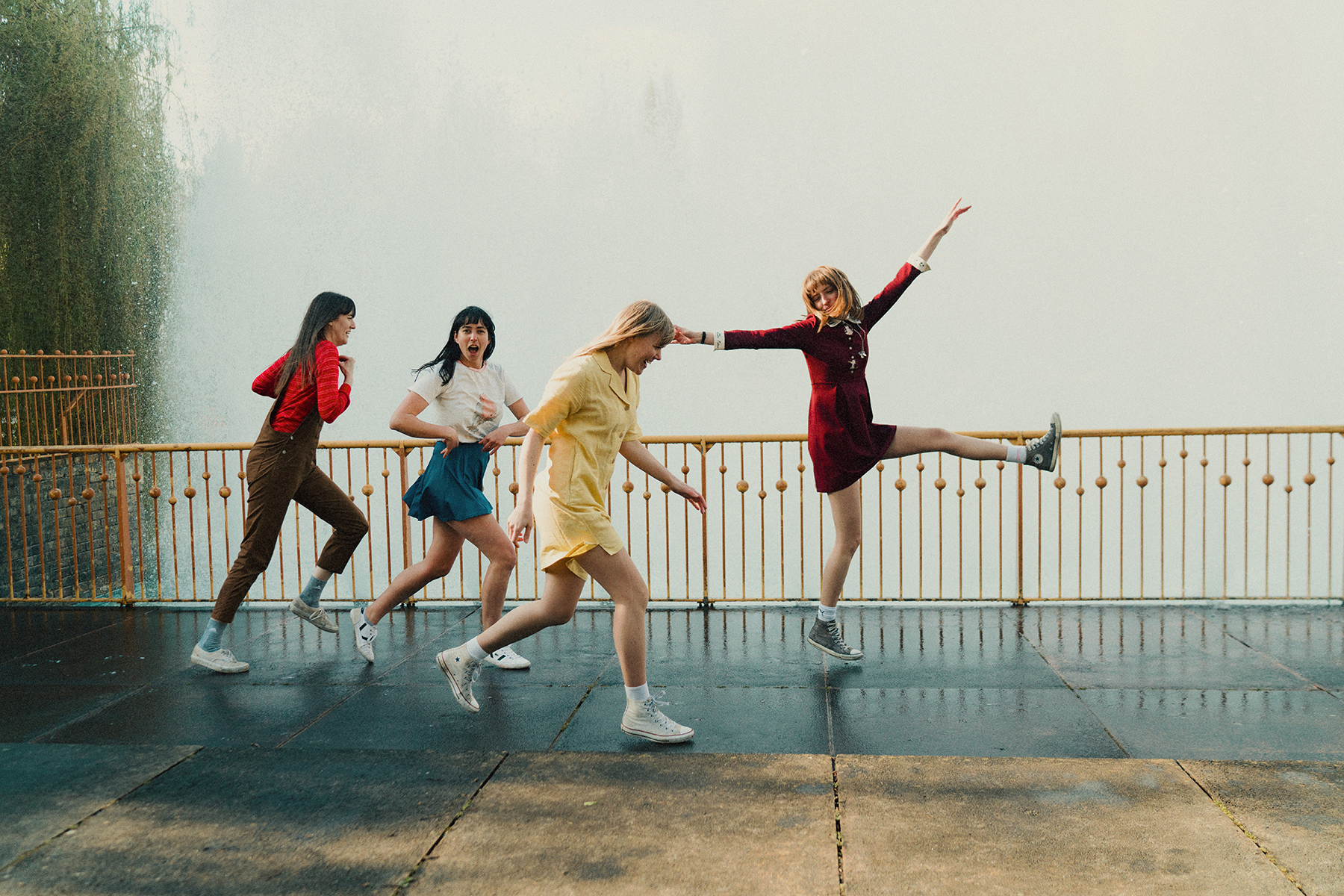 Los Bitchos finished making Let the Festivities Begin! in early 2020, just as Covid forced the world into quarantine, and wouldn’t get together to play again until the following fall. Staying safe was especially important for Crawshaw, who was getting ready to wind down her day job as a physiotherapist in the major trauma unit at St. Mary’s Hospital in Central London when the pandemic began. “I was just basically getting ready to go to SXSW, and working part time,” she says. “And then obviously everything started getting canceled, and there was all this stress with the band just figuring out what we were gonna do. At the same time, the hospital started filling up with Covid patients. I went from one week getting ready to fly to Austin to finding myself on a Covid ward with 40 patients who were all dying.”

Surprisingly, though, the band’s career didn’t stagnate during lockdown. In March 2020, a live KEXP radio session that Los Bitchos had taped the previous year was released. It eventually racked up more than a million views, and for good reason. The brief set is a perfect distillation of the band’s energy, as they smilingly dance around, drop their instruments at certain moments to jubilantly play various Latin percussion instruments, and even joyfully applaud their own great performance, at once celebrating and encouraging one another. “Pre-pandemic we hadn’t done much,” says Jonsson. “We hadn’t done our own headline shows. The KEXP video dropped at the perfect moment, in the beginning of March, just as people had to turn to YouTube for live shows to enjoy music. That really helped build our profile.”

Around that time, they also got asked to do a monthly radio show called Planet Bitchos for the online station Worldwide FM — which they conceived, according to Crawshaw, “as a virtual world tour at a time when no one could go anywhere.” Each show focused on a different country, from Turkey to Mexico to Australia to India. Along with educating listeners, they were learning about these global sounds themselves, and sometimes brought in knowledgeable friends to help; for the episode on Ghana, for instance, the guest was a Ghanaian co-worker of Crawshaw’s from the hospital. Now, Los Bitchos are interested in mixing some Seventies highlife rhythms into their music.

That sense of discovery is all over Let the Festivities Begin!, with each musical turn feeling like an excited detour down an intriguing back alley in a city you’re visiting for the first time. The lack of a singer also gives the music a uniquely communal feel, like each song is a conversation between equals. As they put it themselves: “It’s a team!”

Their playful music videos radiate team spirit as well. In the clip for “Las Panteras,” they’re cool crime fighters. They describe it as “Scooby Doo meets Kill Bill — with some Spice Girls choreography.” In the video for “Pista (Fresh Start),” they’re living together in a house in the country, happily sharing meals and chores until the story takes a cute comic-horror twist.

Like the rest of us, Los Bitchos are busily making up some of the time they’ve lost during Covid, enjoying the experience of taking their music into the world. “There were moments last summer where it was the first time we were able to play for ages,” recalls Crawshaw, “and we found ourselves on some really great slots at festivals. I’d be focused on the girls and just kind of doing our own thing, and now and then you’d look up and see this big crowd enjoying themselves. My jaw would just drop.”

Next month, they’ll follow the release of their album by finally making that belated trip to Austin for South by Southwest, playing their first shows in the U.S., and headlining a European tour. “Even in front of a big crowd at a festival, it still feels like you’re just playing a party with your friends,” says Petale. “That’s what it feels like for me, just having a good casual time in front of lots of people.”