Lenny Kravitz’s upcoming memoir, Let Love Rule, tells the story of the first 25 years of the singer-guitarist’s life, up through the release of his 1989 debut of the same name. “That journey, full of adventure, was where I found myself and my voice,” Kravitz has said of the time period chronicled in the book. “Through that experience, love was the force that paved the way and love became my message.”

Let Love Rule will be released on October 6th (find it here). In this exclusive advance excerpt, from a chapter entitled “The Zen of Zep,” Kravitz describes how discovering both Led Zeppelin and weed on the same fateful day helped set him on his musical path.

Hip-hop was a cultural game changer. But my own personal game changer came in two different forms. These forms collided my first year of junior high in Santa Monica. I’m talking about rock ’n’ roll and marijuana. That combination propelled me in a whole different direction.

During lunch break, I jumped a fence and landed in an empty courtyard in a shuttered church. I was with Shannon Brock, who also happened to be half Black and half Jewish — only, in his case, his mom was Jewish and his dad was Black. Our other friend was a half-white, half-Hawaiian kid named Derek. He had a hippie dad who hung out with the Beach Boys’ Brian Wilson. Derek and I loved riding our skateboards down Lincoln Boulevard to the Lucky supermarket, where he taught me to shoplift. Derek’s family barely had enough to get by. This wasn’t for fun. He was putting food on the table. He could slip a half-dozen steaks down his pants. I tried to help him, but I was a rank amateur. The best I could do was walk out with a box of cookies under my shirt. Mom, by the way, was crazy about Derek. She saw his sweet side. Mom saw everyone’s sweet side. During our escape from school, in the deserted courtyard, Shannon broke out a joint, lit it, and passed it to Derek and me. I had tried weed a couple of times before, but never felt much. For Santa Monica teens in the mid-seventies, smoking weed was like breathing air. I took a puff and exhaled. Still no effect. Shannon told me to hold it in longer. I did, and this time something shifted. At precisely the same time the head rush hit, Derek slipped a cassette in his boombox.

This was a moment. Maybe the moment. My head exploded. My mind blew up with the sound of the screaming guitar, the crazed vocal, the blasting beat. I was knocked on my ass. I hadn’t even heard of Led Zeppelin. I didn’t yet know the names Robert Plant, Jimmy Page, John Paul Jones, and John Bonham. All I knew was that this music was electrifying every cell in my body. The mixture of marijuana and “Black Dog” sent me soaring. The sky opened up. The world got bigger and more beautiful. I was fucked up.

Shannon told me that I had to “maintain.” Maintain was the word. I had to maintain my high. Going back into school, I had to find a way to act cool. It wasn’t easy. When I tried to eat the leftover lamb sandwich Mom had made for me, I couldn’t chew or swallow. When I walked into history class, it was like someone had turned on a giant strobe light. Everything was moving in slow motion. My teacher Mr. Richards gave me a pass to go to the bathroom. I splashed water on my face, thinking that might bring me down. It didn’t. I looked at myself in the mirror. I asked myself, Will I ever come down from this? I made a funny face. I smiled. I laughed. Even though nothing funny had happened, I caught a case of the giggles. Then came the munchies. I could have eaten a mountain of pizzas. I went back to class, still high but able to hide it. On the first day of being stoned out of my mind, I learned to maintain, a skill that I would regularly employ for years to come.

On the same day and at the same time, I turned into both a pothead and a Zep head. Before the end of the week, I’d bought every single Led Zeppelin cassette. Marijuana and rock ’n’ roll became my steady diet.

Weirdly, Dad had prepared me for Zeppelin because of the Jimi Hendrix Band of Gypsys record he’d bought back when we were still in New York. That caught my ear but didn’t set me on fire. Now with Zep ringing in my head, I heard their connection to Hendrix. Hendrix was the source. Turned out that Band of Gypsys, good as it was, was a live album and lacked the seismic impact of Hendrix’s studio recordings. I dug deep into Are You Experienced, Axis: Bold as Love, and Electric Ladyland. Now I saw how Hendrix had opened the floodgates. He was the guitar god. Later, I learned that Jimi had been influenced by masters like Johnny “Guitar” Watson and Buddy Guy. As a kid, though, I heard him as the breakthrough genius. And it didn’t matter that he had been dead for eight years. He lived inside my head. His rock rearranged my brain. I couldn’t believe his intensity. Tonguing his Strat, smashing it against the sides of his giant Marshall amps, setting the thing on fire, distorting our national anthem in such a way that the song finally made sense.

Hendrix was rightfully the hero of every rock ’n’ roller. But I had other heroes who were not accepted by the surf-skate culture of Santa Monica. I loved KISS, but my friends said that they were for fags and that the band looked like they were wearing Halloween costumes. I didn’t give a fuck. As a matter of fact, on Halloween, I put on my mother’s leotard, black tights, platform boots, chains from a hardware store, and a full face of Gene Simmons’s demon makeup and proudly walked dead into the middle of the schoolyard.
Everyone thought I was insane. I thought I was the Black Gene Simmons.

I loved how KISS turned comic book characters into rock stars. I loved their theatrics. Front man Paul Stanley’s androgynous allure, the way he belted out his bluesy riffs and pranced around the stage combining coquettishness with machismo. Ace Frehley’s screaming guitar solos with his customized Les Paul smoking from the pickups. Peter Criss, the cool Catman with the perfect backbeat and the levitating drum kit. Gene Simmons’s throbbing bass punctuated by his serpent-like tongue spewing blood!

I also loved the sophistication and slickness of Steely Dan. Walter Becker and Donald Fagen were brilliant musicians and storytellers who created a blues-based jazz-rock genre all their own. I could love both the most technically accomplished musicians — Weather Report, Mahavishnu Orchestra, Return to Forever — and still love KISS. One thing had nothing to do with the other.

I was obsessed with sound, though I had no idea how to mix the sounds spinning inside my head. I’d hear a Stevie Wonder groove, a Hendrix lick, a Zeppelin riff, a Steely Dan Pretzel Logic story. How to put ’em together? Just keep listening. Listen to Bob Marley. Listen to the Eagles. Listen to Phoebe Snow. Listen to the Commodores. Listen to everything. 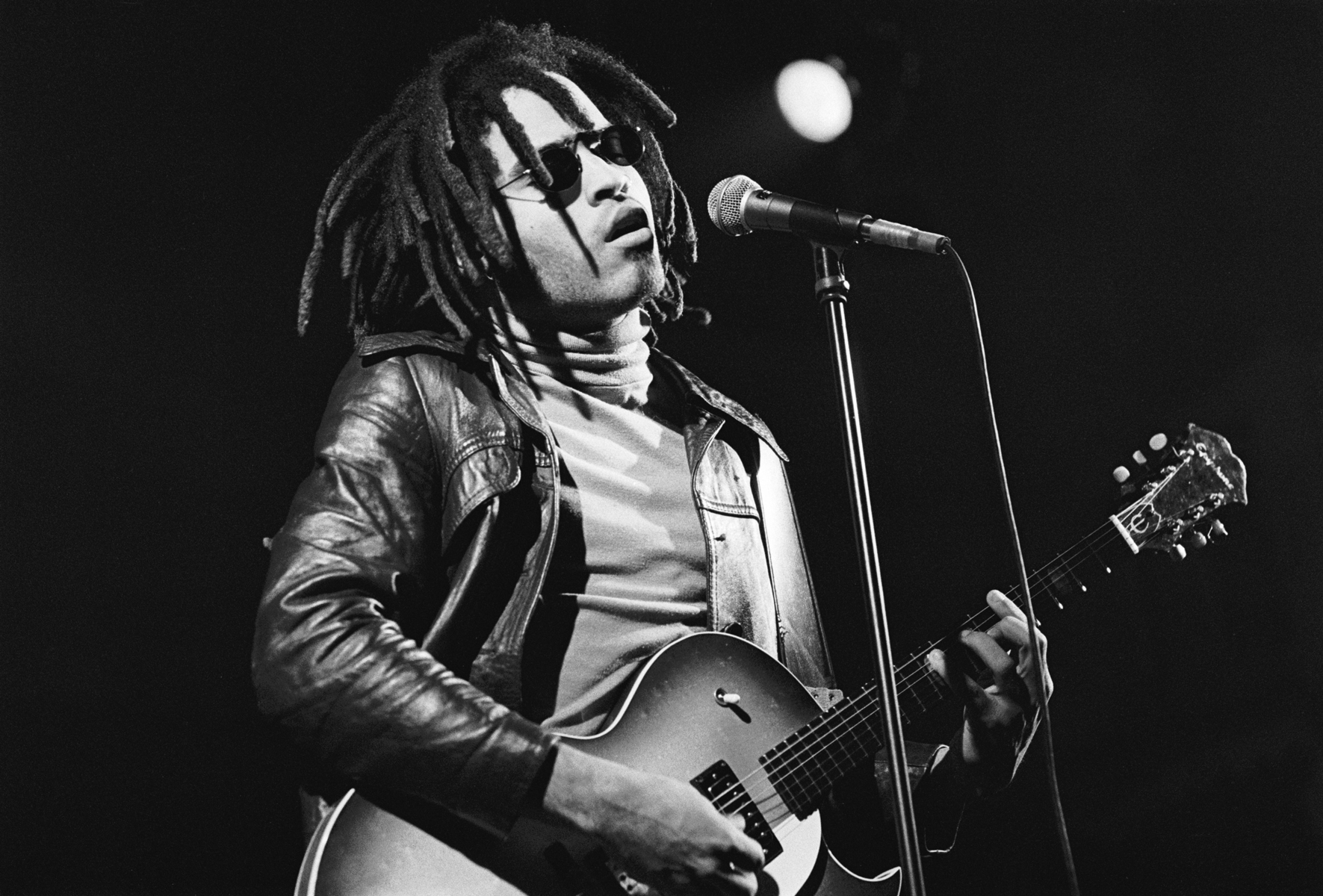 A lot of my friends came from hippie households. Hanging out in those beach bungalows did even more to connect me to an earlier era. Their folks openly did what we kids did in secret: smoke tons of reefer. Sex was still years away for me, but there were make-out parties with blond beach girls. Most of my friends’ parents were in their thirties, as opposed to my mom, who was forty-six, and my dad, fifty-one. I listened to the grown-up hippies tell stories about hearing the Grateful Dead at the Fillmore West or the Doors sing- ing “L.A. Woman” at the Whisky a Go Go. Their period posters of Canned Heat, Jefferson Airplane, and Cream made it seem like the summer of peace and love was still alive and well.

We could also blast the stereo as loud as we wanted. For my friends’ folks, high on Acapulco Gold, the louder, the better. Seventies rock, funk, and four-on-the-floor disco. The Rolling Stones, Parliament-Funkadelic, the Bee Gees — I didn’t discriminate. Cameo, Average White Band, Aerosmith, Donna Summer, Chic. All great.

Back home alone in my room, I kept honing my drumming chops. I followed Buddy Rich, who carried his seventeen-member band on his back. Buddy was a crazy technician. I studied all styles — rock drummer Keith Moon, funk drummer Clyde Stubblefield, bop drummers Max Roach and Elvin Jones.

I also heard the comics that provided the laugh track of my teen years. My friend Shannon turned me on to Richard Pryor. I put Pryor in the same category as Jimi Hendrix: the best of the best. Pryor was hysterical, but the hysteria was deep. He exposed everything. He said everything. He opened up his insides and offered them to the world. No one’s ever been more vulnerable or more downright honest. That Nigger’s Crazy was my jam. But so were all of Pryor’s records. Me and my boys could do all his routines. His characters — Mudbone, the preachers, the pimps, the hos, the winos — were living, breathing people. I carried my dad’s portable cassette player to school so we could listen to Pryor in the back of the library. He was taboo, and that made us like him even more.

The ultimate stoner kings were Cheech and Chong. Mom and Dad never did learn that I was a pothead. So to discover these pothead comics, especially those who made the get-high ritual ridiculously funny, was like finding long-lost friends. Shannon, Derek, and I knew their routines by heart. Humor helped get us through school.

School was excruciating; if my teachers had made the material more engaging or applied it to life, I would have been interested. But it was all about memorizing facts, dates, and formulas. I came home with bad grades, and my parents were furious. They insisted that I focus. I didn’t want to. Or, I should say, I was focused on other things. I just wanted to get high, play my guitar, and rock out.