It all started in Vegas last Sunday, when Kanye West hosted an invite-only listening party for his 10th studio album, Donda. It came as a surprise to fans who have been eagerly awaiting the rapper’s next move ever since it was reported that he was recording new music in Mexico the previous March. By midweek, calls were made, photos were posted, and an album teaser featuring Sha’Carri Richardson and a new song called “No Child Left Behind” was released. Before we knew it, we had a Donda listening party slated for a sweltering summer night in Atlanta. Tickets were as coveted as you’d expect. And Kanye donated thousands of free passes to six black colleges in Atlanta: Clark, Morehouse, Spelman, Morris Brown, Morehouse School of Medicine, and ITC.

On the night of the show, the city was abuzz. There was traffic everywhere and a number streets were blocked off. There were the obligatory hustlers charging $40 for parking spots 10 minutes on foot from the Mercedes Benz Stadium. And if you actually drove a Mercedes, you were able to park for free in a lot right next to the stadium. It appears Kanye somehow managed to breathe life into the “Send It Up” lyric “Can you get my Benz in the club?”

Before most people took their seats, we were thrust into a capitalist onslaught at the merchandise table. There was just a single item available, a long-sleeve T-shirt featuring Donda West’s childhood photo, for $120. The first round sold out quickly, despite there being a two-per-customer limit. One man, who had come in from North Carolina, managed to secure a shirt and declined offers of up to $500 for the piece. There was a second round of merchandise set up shortly thereafter — the long-sleeves now went for $100.

Speaking of clothes, half of the crowd looked like they were going to Fashion Week in Paris and the other half looked like they grabbed the first thing in their closet. There were Yeezy slides, vintage Maison Margiela coats, Giuseppe shoes, and Fashion Nova dresses. People wore quite a bit of Heron Preston and Amiri, too. When the lights finally went down, nobody’s outfit mattered. Though the crowd seemed at least partially curious as to what Kanye himself would wear. Indeed, ever the nonconformist, out came Kanye on a 90-something-degree night wearing a bright-red puffer coat from his upcoming Gap collection. Phones flashed from all directions. Everyone is, of course, recording the exact same video.

The show was slated to start at 8 p.m. but was delayed until 9:50 p.m. We realize later that this was partly because 2Chainz was backstage recording a verse. From the center of the stadium, Kanye appeared like a red dot in a minimalist sea of white, which one imagines is Ye’s platonic aesthetic ideal. He would play the album straight through, occasionally approaching the floor of the packed arena, serving as his own hype man. The show was a kind of ecclesiastical experience. It started with a soulful song, on which Kanye’s voice can be heard repeating “We’re gonna be OK,” as if it were a mantra from a life coach. He plays a song that may or may not be called “Remote Control,” which sounds closer to 808s & Heartbreak Kanye, when he made “RoboCop” and “Paranoid.” People loved it. You could hear cheers throughout the stadium.

A quote from the Gwendolyn Brooks poem “Speech to the Young” booms over the speakers. “Even if you are not ready for the day, it cannot always be night,” the voice proclaims. West would deploy the soundbite to echo throughout the stadium twice this evening. And despite only briefly appearing on the Pop Smoke song “Tell the Vision,” Kanye lets it interrupt the Donda experience for a moment, an appreciated tribute.  There was a song featuring Travis Scott and Baby Keem that easily felt like one of the more accessible and modern songs on the album. There’s also an impressive Playboi Carti feature about midway through. Lil Baby appears on a track, and when it comes on, Kanye proceeds to walk to the middle of the stadium field with his hands in the air during the rapper’s (quite good) verse.

Another gospel-themed song finds Kanye with his hands and knees on the ground. There are chants of “Yeezy, Yeezy, Yeezy!” throughout the audience. Then, Kanye’s hands are up, but he remains on his knees, praying. “Make me new again, last night doesn’t count,” he sings on the track. The show seemed like a merging of Kanye’s now-infamous Sunday Service series and his even more infamous The Life of Pablo premiere at Madison Square Garden in New York. Part church, part concert, part merch peddling. Except there was a lingering uneasiness. Throughout the night, Kanye’s body language spoke volumes. He’s moping, his shoulders are slumped, and his face is cast downward. He was on his knees praying, and sometimes on both his hands and his knees. His happier moments found him half-jogging across the floor. But you get the sense that there’s something troubling Kanye, and it’s easy to speculate on what that might be. One notable moment came around the seventh song, on which West sings about “losing my family” with an emotional tenderness that cuts deep. One song features a recording of his daughter North pleading with him not to leave, and was probably the most hard-hitting moment on the night. 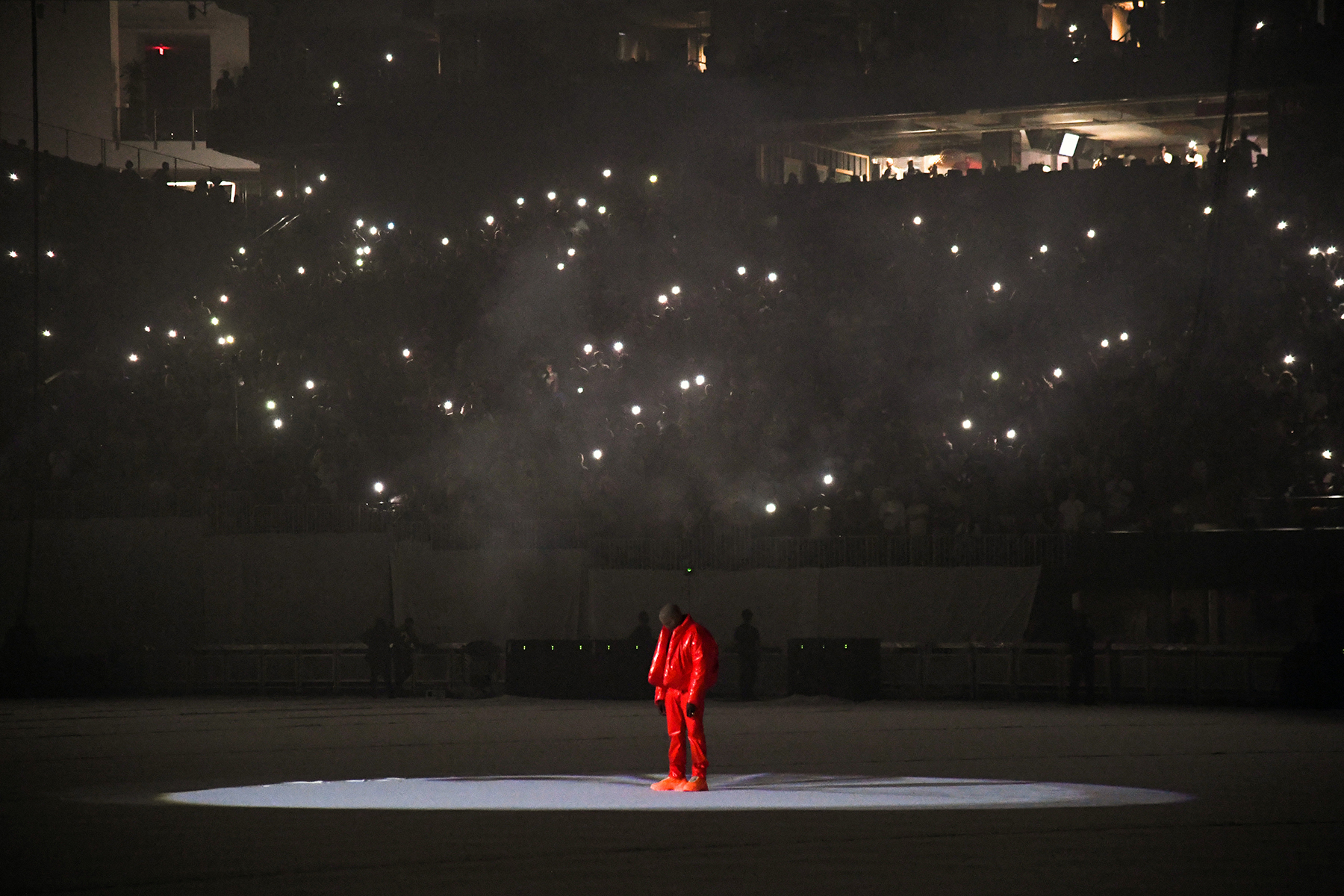 Jay-Z appeared at the end of the album for a verse that, like that of 2 Chainz, apparently came at the 11th hour. Jay and Kanye have famously not been on great terms since the whole Trump thing, and Hov doesn’t hold back. On his verse, he admonished Ye like an older but loving sibling. “I told him to stop all that red cap, we going home,” Jay raps. “This might be the return of the throne. Hova and Yeezus, like Moses and Jesus.” It was like the second coming. One fan noted, “The Hov verse put the icing on the cake.”

After the show, reactions were mixed. “It was an amazing experience. Kanye is the GOAT,” one attendee said. “I feel like I was in heaven. I felt the spirit. I feel like he’s free,” said another. At least one Kanye fan was concerned. “He’s not better without Kim. It made me mad when he started singing that song about this family falling apart,” they said. Kim Kardashian was in attendance last night, providing at least some hope that the two might move on amicably. “I thought it was the best way to hear an album for the first time,” another fan noted. “I feel music, I don’t listen to it. It made it easier to feel the music.”

Donda, however, remains to be seen. The last-minute tinkering suggests an album might be several more days — or weeks — away, in typical Kanye fashion. The listening event, though full of spectacle, did little in offering insight into where Kanye is now. He’s notably been out of the public eye, adorned in a mask when seen out, and he doesn’t address the sold-out crowd for the whole evening. If he’s letting the music do the talking, Donda raises more questions than it answers.