Abbey Road Studios was prepared when they closed their doors for nearly three months in March due to Covid-19 restrictions. Many of the artists and orchestras had already started moving their bookings, and the staff had begun working on an operational strategy. But still, the shuttering gave them pause. “Abbey Road had never closed before,” Mark Robertson, the studios’ Head of Brand & Communications, tells Rolling Stone. “We’re 90 years old next year, and this is the first time that the studios have closed. It was a really significant deal.”

Today, as Robertson and Abbey Road’s manager, Fiona Gillott, walk from the building’s entrance, where a contactless check-in system greets guests, to Studio Three, the halls look unusually empty. The studios reopened on June 4th, but with reduced capacities. There are signs encouraging people to stay two meters apart, and both Gillott and Robertson, who speak with Rolling Stone via Zoom, wear masks until they’re a safe distance from each other in the studio.

Studio Three is where Pink Floyd recorded The Dark Side of the Moon and has also hosted sessions for Amy Winehouse, Paul McCartney, the 1975, among many others. Normally, it could accommodate a 30-person choir or a seven-piece band, but today only a maximum of four people can occupy the live room and only one is allowed in the mixing booth. Although musicians and engineers are hard at work throughout the facility, which recently reopened its café and outside areas, the only other people visible during the Zoom meeting is a cleaning crew through a glass door in the hallway.

“We have to allow for a very thorough deep cleaning in between any changeover of any musicians or people into the room,” Gillott says. “At the end of a big orchestral session, it might take five people three hours to clean … Everything takes a little bit longer, but the demand [to record] has been phenomenal.” Robertson adds that the studio’s bigger rooms are “largely booked into 2021.”

During the closure, Gillott and her team worked with Great Britain’s various music industry organizations, the musicians’ unions, and the institution’s competition, including AIR Studios, to map out their return. In the meantime, their engineers judged competitions and gave advice on home recording. The studio is earning less revenue than usual, Robertson admits, because recording studios are a low-margin business, but Abbey Road has gotten tremendous support from its parent company, Universal.

When they reopened, they slowly phased in their services, starting with mastering, then mixing, and they have since adopted many new measures to resume recording. In addition to allowing orchestras to record in small, socially distanced sections — they sometimes bridge their studios so more musicians can record together, even if they’re not in the same room — Abbey Road has seen an uptick in musicians wanting to film special engagements there.

With no place to perform live, bands and artists have been posting up at Abbey Road to make segments for television and capture livestreams for fans. In recent months, Bastille, Kaiser Chiefs, Celeste, and Emily Burns, among others, have filmed performances there. Most recently, the heavy post-punk group Idles, who are known for their steamrolling guitar lines and hyped-up motivational vocals broadcasted a special livestream from Studio Two. Since the group, which typically spends 190 nights out of a year playing gigs, wouldn’t be able to bulldoze its fans on the road this year in support of its upcoming Ultra Mono LP, the musicians decided doing it at Abbey Road would be unique.

“We asked ourselves, ‘What don’t you get from coming to see us in a concert that we can give you as a livestream?’” Idles guitarist Mark Bowen says. “And having it recorded as well as it possibly can in a world-class studio seemed to be the way to go. We had talked about doing it in a venue, [but] it would be obvious that the crowd was missing [and] you wouldn’t be able to record the sound as well. So we were like, ‘Right. Well, let’s just go to the best place in the U.K., the most famous room and do something really cool in there and really unique and kind of show people a kind of a different side of Idles.’”

At the end of August, Idles played three unique sets at Abbey Road. “It’s different from TV or radio sessions, because we’re in control of every aspect of it,” Bowen says. “Abbey Road was the first place that came to mind for this. I was at a Kanye West one there a few years ago, and even though it’s not a venue — it’s a recording studio — there is a vibe that you’ve got there. There’s an expectation going in there that that’s kind of nice to play with.”

“One of the rare joys out of this distress — the upset that people have been going through with this pandemic — is that there have been new relationships forged [and] new creative ways of operating,” Robertson says. “And I think that’s the case with the creative community.” 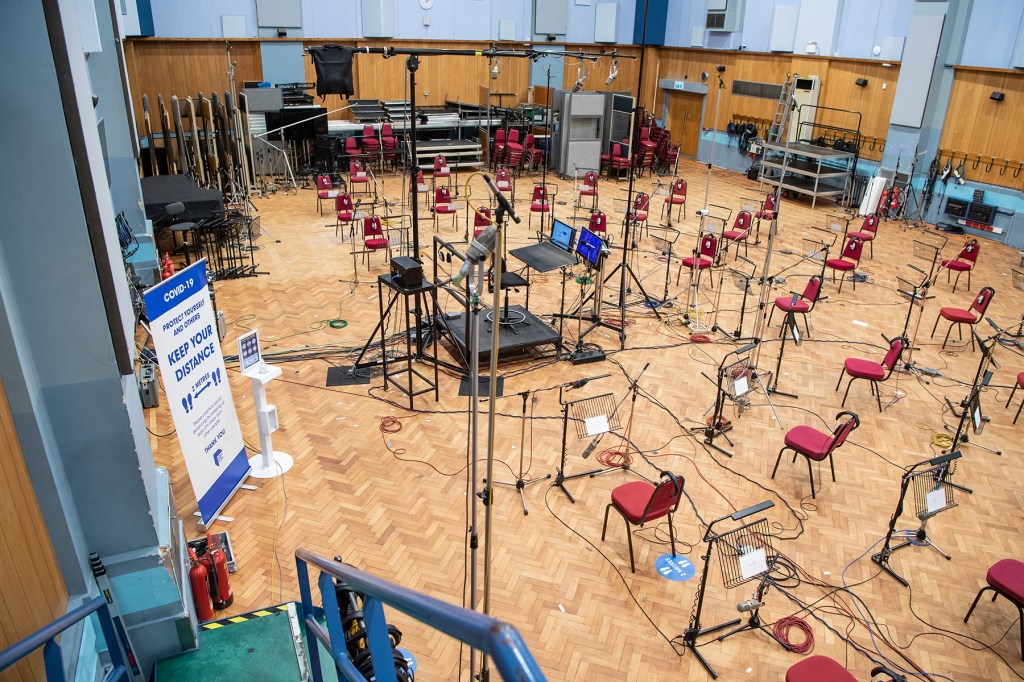 Abbey Road’s Studio One, set up for an orchestral performance in June. (Photo by Carsten Windhorst/Abbey Road Studios)

Beyond livestreaming, other artists have been finding new ways to adapt at Abbey Road. Studio One, the big room that Beatles fans would recognize from the “All You Need Is Love” clip, is currently filled with percussion instruments, and new baffles, installed to battle Covid, are in place between the harps. Composer Christophe Beck, who wrote the scores for Frozen and the Hangover movies, is currently recording the symphonic part of his score for a new Netflix film, The Christmas Chronicles II, which stars Kurt Russell as Santa. While the musicians are recording at Abbey Road, Beck is overseeing things from his home in Santa Monica.

“One of the things that I’ve had to deal with, with the pandemic and social distancing rules, is a limit on the number of musicians you can record at once at Abbey Road,” Beck says. “I believe that number is 40 for us now, which limits us to basically one section at a time. We start with the strings because the strings play the most bars of every piece of music in a score. In this setup, they don’t get an opportunity to hear the trumpets blasting away behind them. So you have to really plan ahead and tell the strings, ‘Notice in the score that the trumpets are blasting away so pretend they’re blasting away and compensate by playing a little bit more aggressively.’ So that has definitely thrown a bit of a curveball in the way that I normally like to work.”

Since Beck has only nine days to track the score, he and his team are using their time by recording strings, then brass, then strings again, in case they need to make tweaks for the blend. Beck speaks with the musicians and conductor via Zoom, which is almost instantaneous, so the workarounds are effective. He even likes the way all the instruments seem to come at him from one direction, instead of their usual places in the orchestra, and may pursue that sound more in the future.He just wishes he could be there, speaking with the musicians and eating in the café. “I just miss the excitement of being in a place as historic and storied as Abbey Road,” he says.

“People are just grateful to be back working and creating music again in an environment that they love and they’re passionate about,” Gillott says. “And hearing the music being created in the world again, it reminds you that that music plays such a huge part in our lives. Without it, it’s a lot quieter.”