In September of 1996, a reporter asked Tony Thomas, the musical director at Seattle’s KMPS Radio, what he thought about LeAnn Rimes’ Blue. Released 25 years ago this month, the title track had become one of the biggest selling singles in the past decade, and in a few short months Rimes, then 13, had gone from local Texas singing sensation to the CMA Awards and, soon after, the youngest solo artist to win a Grammy and the first country one to win Best New Artist.

“The question is,” Thomas said. “Is this the dawn of a career for a new artist, or is it just a novelty? I believe, in the end, Rimes’ talent will win out.”

Thomas was both right and wrong. Rimes’ immense talent did emerge to match the promise of her debut. But it also wasn’t always enough to “win out” against an industry that has undervalued the legacy of both Blue and Rimes herself, an artist who helped to birth an entire generation of country artists, most of whom are barely years her junior, if that. Maren Morris got her start singing Rimes songs into a karaoke machine — it’s how her parents noticed that she possessed a talent far beyond the usual fold. Mickey Guyton caught her performing the National Anthem at a baseball game, an experience she credits with making her want to perform country music. Kacey Musgraves yodeled in harmony with her duo the Texas Two-Bits, after Rimes brought the tradition back into the fold.

Countless others, from Rissi Palmer to Carly Pearce, point to Rimes as an influence. Just watch Taylor Swift’s video for “You Need to Calm Down,” and see a woman on a yellow floatie in a pool with white-rimmed sunglasses and pink lips that looks strikingly similar to how Rimes first came into public consciousness in the music video for “Blue” (and we all know that Swift doesn’t do anything without careful intention).

“I’m grateful for the path that I forged for all of these other women, because there was so much pushback from the industry at that time,” Rimes, 38, tells Rolling Stone. She’s calling from Los Angeles where she’s finishing an upcoming album. “I always heard no one wanted another Tanya Tucker. It was like, ‘Oh, we don’t want a young kid. Bring her back when she’s 18.’ That lit a fire under my ass real quick.”

Tucker, like Rimes, achieved success young and then was determined problematic in the court of public opinion: A bulk of Rimes’ early press speculated if she would be able to withstand the windfall of success while simultaneously helping to create the vehicle to swallow her whole. Rimes spent much of 2000 and into 2001, at only 18, embroiled in various lawsuits — with her label, Curb, and against her father, Wilbur Rimes. The Tennessean ran a front-page story in 2001 touting the headline “Stepmom says LeAnn Rimes tapes reveal ‘spoiled person,’” alongside a photo of Rimes biting back tears. Somehow she, the victim and a teenager, was being positioned as the villain, while adults and the willing media delighted in her as the scapegoat for their own skepticism about a woman’s competence and control. It’s a pattern that went on to be reproduced with Britney Spears in a different, but all too familiar, form.

Rimes didn’t relent, despite the public scrutiny. Instead, she took her concerns about artists rights to Capitol Hill, where some other musicians, embroiled in their own lawsuit against a record label, were seated watching: The Chicks. Both ended up being censured by the Music Row and country radio community in ways that, in hindsight, can be considered a way to keep women in check – politically, creatively or simply in how much power they are entitled to hold. If that sounds like a conspiracy theory, Rimes would argue otherwise.

“I don’t think that’s really a conspiracy theory, I think that that’s truth,” Rimes says. “There’s just always been some way to keep us down or check us a bit. It’s not something you can directly point to and say, ‘Oh yeah, this is the exact thing that they did in order to do that.’ But I can definitely tell you I felt that along the way.”

Rimes was “checked” as soon as she came on the scene at 13 — in that lawsuit with her label, in her “feud” with Trisha Yearwood (they both cut “How Do I live”), and eventually in her affair with her now-husband, Eddie Cibrian. For Morris, Guyton, Musgraves and others, the legacy she carries forward is simply in her artistry and determination, and a career that can hold both the traditional notes of Blue alongside pop hits and even meditation recording. Rimes’ new LP, God’s Work, will focus on spiritual songs, done her own way.

The short-term marvel of Blue was how young Rimes was when she recorded it. The long-term marvel is her exquisite vocal skills and emotive expression that transcends age, both timeless and completely unique. Though she had not yet personally endured the heartbreak or passion she was singing about, it was believable, because empathy carries even more weight than experience, especially when it comes to country music.

To celebrate the 25th anniversary of Blue, Rimes will be releasing special previously unreleased videos, announcing tour dates soon, and doing a lot of reflecting. We spoke to her about the past, present and future of Blue and her life in and out of country music.

How does it feel to reflect back on Blue, 25 years later?
It’s interesting because I don’t remember much. I think that was such a defense mechanism, to forge ahead and be able to do what I have done for the last 25 years. It was such a tumultuous time, but I’m grateful for that version of me who was so ballsy as a kid. I dug “Blue” out of the trash – my dad threw it away because the demo was awful, and I decided to put the yodel in, just being creative. I knew what I wanted and I knew I wanted to be my own unique artist from a young age.

There are so many women artists, from Maren Morris to Mickey Guyton, who credit you with opening up the genre for them. And now those women are pushing country forward for a new generation.
They inspire me now in a lot of ways, because I think there was a need as a young woman to play the game of “good girl” and to shut my mouth and sing. We’ve all been told that a million times. To see these women be very outspoken about the things that matter to them has really inspired me to do the same. Not that I haven’t for many years, but it’s a new level of authenticity they’ve inspired me to embody.

You brought up Tanya Tucker, and it’s very interesting to look at how in country music — and across the industry — we love to boost young women, but then seem to want to keep them in check as they cross into adulthood.
Oh, absolutely. I think that goes across the board as a patriarchal society, that’s being torn down. There’s a way that country music places women on this pedestal — like I was this otherworldly angel child, the way people perceived me. And anything outside of that, any kind of humanity or sexuality or rowdiness or just being a woman, would never have been welcomed in country music. And I love Tanya to death. She’s so much fun. She’s been through a lot and I greatly respect the fact that she’s still very much standing after everything’s she’s been through.

It’s a real mechanism to keep women from expressing sexuality, as you mentioned, isn’t it?
I was talking to my therapist the other day and she went back and watched videos of me around 15, and we were talking about the fine line I was walking, playing the role that everyone expected of me, and didn’t want me to grow out of, but at the same time trying to find a way to express myself. It’s something that I am still challenged with, to fully step into my sexuality. To be honest, my affair and Eddie was my real torch to everything. It was unconscious, but unconsciously chosen for a reason.

How have you seen the permissions we’ve allowed women in country music shift — or not shift — over time? You got a lot of pushback for crossing over to pop early on.
It’s so easy, especially for female artists now, to cross that line. Are there really any lines anymore? And what is country music? It can be all the things. And that’s one of the biggest changes I’ve seen within country music, that those lines are very blurry, if they’re even there at all anymore, which is great — seeing someone like Mickey Guyton come out and call out the things that pushed me away, whether consciously or unconsciously. To see people changing and shifting hopefully for the better and for the long haul, I feel like maybe there’s a place for me to be able to come back and create something [in country] one day. There was a real challenge for me with what was unspoken in the industry as a woman and as a creator, and where those boundaries were drawn. So I see that the box is becoming larger. The walls of country music are expanding. And I hope that’s for good and it doesn’t collapse back on itself.

We always look back at the Nineties as being a heyday for white women, with rose-colored glasses, because there were still so many barriers.
I did have a lot of say in, business-wise, what was being released as singles and what songs I was performing. But then I think back and it was always that I was having a say as long as it was what everybody else wanted. When I really started to expand and create in different ways, I fought a lot. There were a lot of heated phone calls that I was having at 16, 17 years old, fighting for my creativity. And yeah, there was this moment in time where a lot of women were being played on the radio, but there were a lot of freedoms I think we really didn’t have. 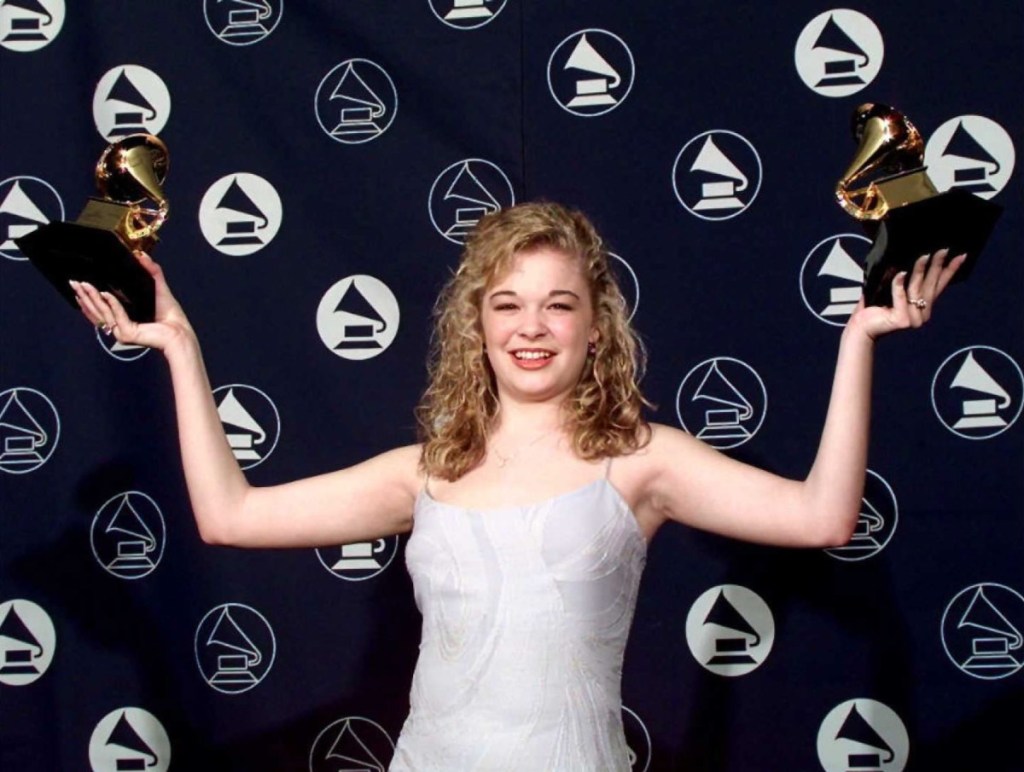 LeAnn Rimes won two Grammys in 1996, including one for Best New Artist, the first time a country singer had won that honor. (Photo: JON LEVY/AFP via Getty Images)

Do you see yourself making a traditional country record again?
I definitely see myself creating a pure country record at some point. Blue is such an iconic piece of work, a real sound that no one was doing at the time. I think there’s a real need for true country music to be celebrated and created, and I would like to think that I could serve it well at some point.

You have been dedicated to allyship work in the LGBTQ community, from very early in your career. How important has it been to you, especially now, to watch T.J. Osborne come out and the genre shift in some small, meaningful ways?
So important. My uncle passed away from AIDS when I was 11, and being from the South and seeing how ostracized he was, not only from society in general, but from our family. When he died, my dad was the only one who went to this funeral. It was just awful. I always wanted to give him a voice. I cry talking about it. It’s been really important for me to be very inclusive as an artist and a human being. I’m so happy that people are being more embraced in the conversation. And not just about LGBTQ, but also about racism and sexism and all the things that needed to be brought out into the open.

[Marissa R. Moss is the author of WHERE HAVE ALL THE COWGIRLS GONE? forthcoming from Henry Holt & Company, Summer 2022.]