Hugh Prestwood needed help. The country music songwriter and his wife Judy came to the sobering realization that they could no longer afford the rent at their Long Island, New York, home. Nor could they scrounge together the money to move back to Prestwood’s native Texas, even if the state’s lower cost of living might provide a more sustainable future. For the most part, the 79-year-old had nothing — his life savings were depleted.

Still, Prestwood hesitated before he decided to create a GoFundMe page, title it “Elderly and Drifting Towards Homeless,” and publish it earlier this month for all the world to see.

“My worst-case scenario was that I was going to expose myself as a complete bum, and then get no money,” Prestwood tells Rolling Stone. “But it’s worked out very good.”

From the late Seventies to the mid Nineties, Prestwood was among the most respected and acclaimed songwriters in Nashville, writing time-tested country classics like Trisha Yearwood’s “The Song Remembers When,” Randy Travis’s “Hard Rock Bottom of Your Heart,” and Shenendoah’s “Ghost in This House.” A-list names like James Taylor, Judy Collins, Alison Krauss, Jimmy Buffett, Nils Lofgren, Tanya Tucker, and Kathy Mattea all covered his songs.

“Hugh is a master of the craft and an American poet,” says the British singer Rumer, who recorded an entire album of Prestwood songs titled Nashville Tears in 2020. “He’s up there with Jimmy Webb.”

Given his reputation, Prestwood’s GoFundMe campaign went viral in the Nashville music community. Seeing Prestwood’s struggles “just broke my heart,” says Luke Laird, the songwriter behind hits for stars like Carrie Underwood and Kacey Musgraves. “Hugh is literally one of the best writers to ever come to Nashville. I thought, ‘Gosh, I could be in that same situation someday,’ and I’m not near as good of a songwriter as he is.”

To date, the GoFundMe has raised over $100,000 by way of 600 individual donations — more than four times its initial goal. The list of donors is equally impressive: Legends like Travis and Buddy Cannon, A-list songwriters Laird, Craig Wiseman Josh Osborne, and Dallas Davidson (who personally donated $10,000), and industry executives like Scott Borchetta and Joe Galante all contributed. “I’d like to think my fellow travelers would look after me if hard times caught up with me,” Wiseman, who wrote the Tim McGraw mega-hit “Live Like You Were Dying,” tells Rolling Stone.

Prestwood has been thrilled with the outpouring of support, and the story of the successful campaign has already turned into an uplifting story about the “country music family” stepping in to support one of its own.

“I’ve been in this industry about 25 years, and I’ve never seen something go around like this did,” Bart Herbison, President of the NSAI, a Nashville-based association that advocates for songwriters, tells Rolling Stone. He’s known Prestwood for decades and, over the past week or so, says he’s received the link to the GoFundMe “from 40 or 50 different people.”

But even if this specific campaign has a seemingly happy ending, it masks a much darker reality. For every Hugh Prestwood, there are dozens and dozens of aging songwriters without the reputation, the network, or even the know-how to get their story in front of a supportive community (a search of GoFundMe for “homeless songwriter” yields 103 results). Or they’re simply too ashamed or alienated to ask for help in the first place.

“I get a call once a week about some songwriter who’s in tough health circumstances because they don’t have a marketplace insurance policy,” Herbison says. “When you sign a publishing deal, there’s not a 401k that comes along with it.”

“When you grow up with the mindset that your royalties were going to be able to help you fund your senior years and then that suddenly went away, that’s a harsh reality.”

Reading Prestwood’s testimonial about his struggles, it’s impossible not to also see his story as the cross-section of systemic failures both within and outside of the music industry: the lack of regulation of the housing market in Northern Long Island, which Prestwood is now forced to leave due to soaring rent; the for-profit private healthcare market, which was charging him $600 a month for coverage before he qualified for Medicare; and the tech industry’s unfettered hollowing-out of songwriter royalties due to decreased album sales and the advent of digital music over the past two decades.

“When you grow up with the mindset that your royalties were going to be able to help you fund your senior years and then that suddenly went away, that’s a harsh reality,” says James Dean Hicks, Prestwood’s friend and a fellow Nashville songwriter who’s written songs for Kenny Chesney, Conway Twitty, and the Oak Ridge Boys.

Prestwood is keenly aware of the ways in which his story is drawing attention to a much larger problem. “It represents the plight of a lot of songwriters,” he says, referring to various industry changes over the past several decades that have resulted in the dramatic shrinking in the number of professional songwriters who are able to make a living off their publishing income.

“Ultimately, digital [music] is the real culprit,” Prestwood says, “but what are you going to do? The business has changed.”

Prestwood’s colleagues and friends were glad to see their friend receiving support, but many were equally concerned by what his cry for help represents. “It’s almost like getting a splash of cold water on the face,” Rumer says. “It’s like the music industry saying, ‘Hang on a minute, these masters of the craft are struggling.’”

By the time Hugh Prestwood was a respected veteran songwriter in the Nineties, the country music industry, like the music industry at large, was experiencing an unprecedented period of commercial success. Herbison guesses there were 4,000 full-time professional songwriters working back then, with only a fraction of that number remaining today.

Within the next ten years, however, a series of technological advances changed the music industry in ways that dramatically reduced the income of professional songwriters. Prestwood wrote a song about one of those issues — file-sharing in the Nineties — in his song “Pipers Don’t Get Paid.” The prioritizing of single song purchases over albums on platforms like iTunes in the mid 2000s decreased royalties received from album cuts too. And the overall streaming ecosystem that solidified over the past decade compensated songwriters so poorly that even songs with multi-millions in streams barely provide any income.

Joe Galante, former chairman of Sony Music Nashville, emphasizes the business’s transition from albums to singles and says songwriters like Prestwood who used to make money from album sales have seen that revenue dry up. “He got caught in the transition to streaming,” Galante says.

Adds Herbison, “People like Hugh were used to a certain business model, where there was a sustained income for a long time, but then it just stopped.” 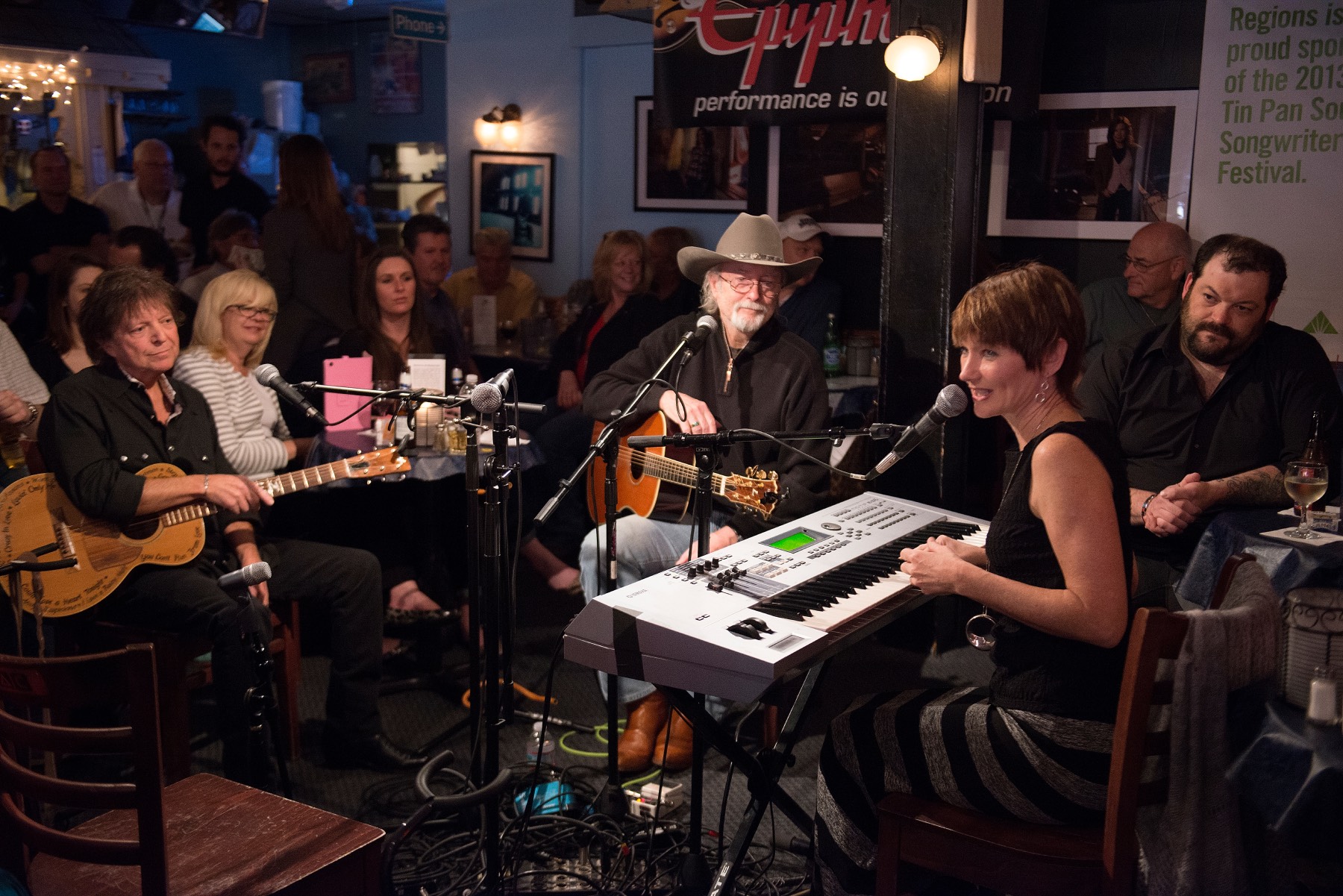 In the mid 2000s, Prestwood began selling rights to his catalog, something many songwriters are forced to do when strapped for cash. He’s since sold off the vast majority of his publishing for a sum he estimates to be $250,000, which Prestwood and his wife lived on for years until it ran out. “About two years ago I sold my publishing at Universal for peanuts,” he says. “I couldn’t even pay my electric bill.”

“All of a sudden, the only asset they have is their songs catalog, and somebody’s always willing to buy it, probably for a lot less than it’s worth,” says Hicks, who now makes a living himself by playing “story behind the song” corporate events. “I encourage them all not to [sell], but you have to do what you feel like you have to do for your family.” (One donor to Prestwood’s GoFundMe: Merck Mercuriadis, who’s spent nearly two billion dollars in recent years buying up the publishing of artists like Neil Young, Beyoncé, and Fleetwood Mac.)

By the time Rumer released a full album of Prestwood songs in 2020, Prestwood says he only owned the publishing to three of the 15 tracks she recorded. While he’s appreciative of the album and considers it a gorgeous testament to his life’s work, he’s seen roughly only about $1,200 in royalty income from the project.

“We invested maybe 150 to 200 thousand dollars into the album. That still didn’t make a difference financially for Hugh,” Rumer says. “Something’s wrong if I do a whole album of somebody’s work and it doesn’t benefit them.”

With his GoFundMe fully funded several times over, Prestwood is ready to make the move to Texas, where rent is cheaper and he’ll be closer to family as he gets older. He hopes that the surplus money he’s received through donations will be able to give him and his wife a small measure of security in the event of future health costs.

“We can say streaming services don’t pay fairly, and we can say that different corporations have taken advantage of antiquated copyright law,” Herbison says, summing up Prestwood’s situation. “But this is the human toll.”

When talking to Hugh Prestwood, you learn he’s a man of contradictions. He taught songwriting for years at the progressive New School in Manhattan, but he describes himself as an unabashed conservative. Particularly wary of what he calls “identity politics,” he shares his Fox News-leaning thoughts on the subject on Facebook. Yet he’s also quick to point out that a slew of social services and government programs, from Meals on Wheels to state aid for his heating bill, have essentially kept him and his wife alive in recent years. For the last decade plus, his only source of income has been Social Security.

“To me, it’s not so black and white,” he says of his support for government programs despite his conservatism. “There’s a lot of good things the government can do to help people. I don’t dismiss that at all.”

In the end, Prestwood says he’s not resentful of the music industry for failing him. Rather, he’s resigned and dismayed at what has become of the line of work to which he devoted his life. And he has a word of caution: “I would not recommend that anybody go into songwriting.”