Most romantic comedies are selling a fantasy: flowers, Champagne, weddings that cost more than the budget of your average indie film. But The Big Sick, a rom-com that takes a long detour into random disaster, grounds itself in reality from the very first scene, when an emcee calls a young comedian named Kumail Nanjiani to the stage. The Silicon Valley star, playing a loose version of himself, dramatises the decade-old period when he met his wife – the film’s co-writer Emily V. Gordon. They fell in love, dated and broke up because he wasn’t ready to introduce his his white girlfriend to his observant Pakistani Muslim parents. That might’ve been the end of the romance … if Gordon hadn’t wound up comatose in the hospital with a mysterious illness.

Much like Nanjiani’s stand-up and his popular Twitter account, The Big Sick has a sweet, sincere sense of humour – yet still manages to find dark comedy in Gordon’s harrowing ordeal without trivialising her near-death experience. In one scene, where Emily (played by Zoe Kazan) is unconscious, Kumail apologises as he uses her limp thumb to unlock her cellphone and call her parents. Later, he and Gordon’s mom (Holly Hunter) bond after a chilly introduction by “stress-eating” junk food on a sleepless night. Characters cry, messily and often. And it doesn’t downplay the Nanjiani’s own cultural-clash conflicts with his family, from his parents’ many attempts to ensnare him in an arranged marriage to their initial resistance to his life choices.

“It’s strange for them to see a piece of their lives on screen for everyone to see, but they’re excited about it,” he says. “I walked them through the whole movie before we shot it, so there weren’t any surprises for them. I think the surprise for them is, it’s a movie that has their son in it.”

We sat down with Nanjiani in New York to discuss his collaboration with Gordon (as well as a few of modern comedy’s sharpest minds), the obligation they felt to defy romantic comedy clichés and why it’s important to talk politics in 2017.

The Big Sick has been doing the festival circuit for a few months now. What has it been like, watching audiences respond to such a personal film?
That’s my favourite part. When you’re doing promotion, it’s easy to get disconnected from the thing you’re promoting. So watching the movie with a crowd and seeing people connect to it is the thing that keeps me connected to the movie. People will come up and show Emily their surgery scars. We get people in multicultural relationships, or first- and second-generation immigrants, telling us stories that are similar to ours. The theme of disappointing your parents is something everybody knows. Everybody knows someone who was sick.

Speaking of Emily, how did you two approach co-writing the scenes that take place when her character is in a coma. Did you have to fill her in on everything she missed?
I don’t think it occurred to her until we started writing: “Oh, right, you guys were there the whole time, and I was in a coma. What did you do? What were those days like?” And I didn’t realize that she didn’t realize what had happened during those days. There were a lot of memories I hadn’t talked about – and now I was talking about them with the person we were at the hospital for. I also didn’t know what her days were like once she was up and conscious. I would visit and leave, but I didn’t know that every hour someone would come and take her blood. Or that she felt she had no privacy. Or that she watched all six seasons of Andy Barker, P.I. So it was interesting to really, really dig in – to sift through our experiences and explain them to each other.

You collaborated on the film with two very distinctive comedic voices, producer Judd Apatow and director Michael Showalter. What did they bring to the story?
Judd’s whole thing is that stories should be messy and emotionally complicated, and that every person’s point of view should make sense. For him, the comedy comes last. He’s like, “You’ve go to have the characters fleshed out, and there can’t always be clean resolutions. There should be arguments where the disagreement isn’t resolved, it just kind of ends.”

Mike has this weird mix of a comedy mindset – because he’s done so much strange, singular comedy, like The State – and a strong sense of story and emotionality. He’s a very emotional guy. Nobody else that I can think of has that particular combination. 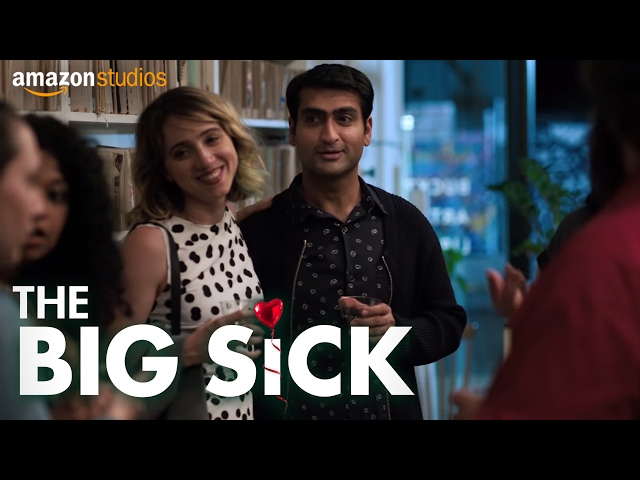 Did you always have Ray Romano and Holly Hunter in mind to play Emily’s parents?
That was Judd. We decided to cast the mom first because she’s the parent my character has more conflict with, and we needed the right person for it. Judd had seen Holly teach an acting class that year, so he was like, “It should be Holly Hunter.” We had to convince her, because she’s a legend and it had been awhile since she’d done a comedy. Once she came on, Judd had the idea that Ray should be Emily’s father, because they’re so different. They look so interesting together, and they have such different energies.

Most romantic comedy have a moment where the couple says “I love you”; Emily and Kumail tell each other, “I am overwhelmed by you.” How did that come about?
We did a lot of emotional improv, and that scene came out of something Zoe and I did together. She said, “I am overwhelmed by you,” and I was like, “I don’t know what to say,” so I just repeated it back to her. We knew the scene was about one person opening up and the other person not being able to reciprocate. I loved that moment because it was so weird: It’s not like the other person doesn’t say “I love you” – it’s that the other person says it exactly the same way. After we did that, we were like, “Wow, that felt so strange.”

We had seen a lot of bad romantic comedies, and what we found they all had in common was a lack of specificity. They felt generic because they felt like everybody’s conception of love, where really it should be about these characters’ perception of love. And then people watching it connect their own perception of love to it. So we knew that we wanted the way these two people are getting to know each other and opening up to each other to feel specific.

Do the movie’s stand-up scenes draw on your real early material?
Yeah, the rule was that I only did material from around that point in my life, except at the end, where the stand-up I do was written for the movie. The early stuff was tricky because I had to perform the way I was performing then: I would leave the mic in the stand, I was pretty tentative on stage. This guy is not as experienced at stand-up as I am now. And it was tough, because I was performing for a real crowd of extras – you could’ve done actual material and done well. But the point isn’t that I’m doing well; it’s also not that I’m not doing well. We present the stand-up as it really was. It’s up to the audience to decide if it’s good or not.

The point is not, “This guy’s gonna be a star.”
That never works. There are so many movies about comedy where they’re like, “Wow, that was a genius set.” And you’re watching it, thinking, “That’s a genius set?”

“People aren’t communicating – it’s just yelling. I’m guilty of it, too. But I think empathy is extremely important. If you don’t have it, everything falls apart.”

Silicon Valley is just finishing its fourth season, and it’s been a big one for your character. Has it been fun watching Dinesh come into his own, however awkwardly?
I love it. That’s the advantage of playing a person for four seasons. In the beginning, you’re trying to figure out who the guy is, then you’re trying to put him in different situations, to see what this guy would do with romantic success or business success or whatever it is. I love to keep exploring and find different sides of Dinesh.

T.J. Miller is leaving the show next season. What do you think Pied Piper will look like without its resident buffoon, Ehrlich Bachman?
The chemistry of the show’s gonna change. But I think it’ll still be good, because the rest of the cast is so good, and the writing staff – they’re geniuses. Ehrlich Bachman is such a great character, and I’m gonna miss working with T.J. But maybe this is an opportunity for the show to change, four seasons in. And that is exciting.

You’re a pretty prolific presence on Twitter, and your feed tends to mix comedy with your thoughts on politics, religion and racial justice. Do you feel a responsibility, at a time when Islamophobia is so rampant, to be a voice for Muslim Americans in particular?
I don’t think I feel a responsibility. I just do it because it’s what’s on my mind. That’s what my Twitter has always been. It used to be video games and movies and stupid jokes. Now, I [tweet about politics] because it’s all I can think about.

Do you envision your work getting more political, too?
I don’t know. With my comedy and acting, I just want to tell good stories and do stuff that I can connect with. So if I did more political stuff, it wouldn’t be because I felt like I needed to do political stuff. It would be because it was just where my head was at. But now, when I see work that doesn’t engage with what’s going on in the world, whether directly or indirectly, it feels pointless. To me, even the success of Wonder Woman is important. That’s a female superhero with a female director. We don’t see that. So when you go see it, you’re standing for something. And I feel like people want to engage with stuff that stands for something. I don’t think people want completely escapist stuff right now.

We’re not living in the era of Gossip Girl anymore.
Yeah. If one bad thing happens, then people seek escapism because they want to forget that one bad thing that happened. But when it’s not one event, it’s your whole life – then something that doesn’t engage with your reality feels so frivolous.

You recently gave a graduation speech at your alma mater, Grinnell, where you urged the graduates to “populate your life with people different from you.” Why was that such an important message for you to send to kids who were just starting out in life?
We’re in such a strange situation now, because there are different political sides, and they don’t talk to each other. They shout at each other on Twitter. I’ll be talking to someone and suddenly they’ll start accusing me of stuff, and I’m like, “That’s not me, I didn’t say that. You’ve projected this whole set of adjectives or beliefs on me.” People are not really communicating – it’s just yelling. I’m certainly guilty of it, too. But I think empathy is extremely important in society, and if you don’t have it, everything falls apart. If there’s an answer to all of this, it has to be empathy.