A long, imposing row of straight-backed men and women, all of them on horseback, all of them confronting the horizon of a Western plain. Strange how affecting an image as simple as this can be. But the genre of Westerns is built on such images. We could be talking about John Ford’s painterly visual discoveries within seemingly every crevice of Monument Valley, or the flash-and-dash, uptempo excitement of Sergio Leone’s famed close-ups — on warring sets of eyes, on hot fingers itching for a quick draw — coming at us as if the camera itself were a gun. Style in every sense, even fashion — and, especially, the inimitable styles of its most enduring actors — has long marked the genre. So much so that when style seems to trump so-called substance, the result can still prove not only riveting but subversive, substantive — often as if by accident.

The headlined fact about Jeymes Samuel’s The Harder They Fall, which is currently streaming on Netflix, is that it’s a Black Western: an oater with a primarily-Black cast, many of them based on real-life historical figures, like Stagecoach Mary, Nat Love, and Cathay Williams (who, unlike and the others, is not directly referenced in the film by a character of the same name, but instead seems to have inspired the tough and witty character Cuffee, wonderfully drawn by Danielle Deadwyler). Don’t mistake this for a sign that the movie is a history lesson in the usual sense. Liberties are taken. Genres and references are criss-crossed and entertainingly reassembled. Bleak forays into the Black subjugation of the era — we’re talking about the late-19th century here, the era of Black freedman towns being established by formerly enslaved peoples while white settlements were similarly pushing farther West — are noted, more than just nodded at, but largely left to rot in the completely inferable near-past.

“While the events of this story are fictional,” the movie’s opening cards tell us, “These. People. Existed.” Yes — but more to the point of the actual movie that follows, not quite like this. The Harder They Fall is a fantastical revamping of history, a gathering of the Black West’s known (but not well-known enough) MVPs into one arena, given a strong, single through-line — revenge, what else? — and satisfying-enough reasons to bump heads. If that sounds too close to fantasy, so be it. The West’s white hero mythology is no less of a fantasy, albeit of a different, far more brittle and poisoned stripe.

The Harder They Fall can’t reverse that reality outright or even undo the downplaying of blackness that largely defines the genre. It’s not razor-sharp in its political immediacy the way it might have been if it were made during, say, the Blaxploitation era. The movie’s definitely got politics on its mind — the politics of representation perhaps above all — but more than that, Samuel’s movie, with its reggae-inflected soundtrack and booming cast (Jonathan Majors, Idris Elba, Regina King, Delroy Lindo, LaKeith Stanfield, Zazie Beetz, Damon Wayans Jr., Deon Cole — among others) revels in the freedoms of pastiche, reckless violence, and glossy, staccato style. Music cues bump and sway with a joyful disregard for period accuracy. Characters code-switch freely. When a pair of gold teeth get knocked out of a man’s mouth, someone’s quick to swoop in and collect them; the movie’s often funny.

You’ll have to forgive people the temptation to mention a figure like Quentin Tarantino when discussing Samuel’s movie, because so much of the above — all of this stylistic liberty — is familiar to his domain. But he doesn’t own it. And in the first place, Samuels strikes out, or back, in a couple of pointed ways. One of them is the use of the N word. The second that a white man in The Harder They Fall almost lets it spill from his mouth, he’s shot in the head. He does, at least, get the N out. “He might coulda said ‘nincompoop,’” cautions Cherokee Bill (Stanfield) after the fact. “We ain’t no nincompoop,” says the shooter, Trudy (King).

Case closed. And where a movie like Django Unchained was an outright revenge fantasy, a reworking of history (and movie mythology) that made a grand show of delivering long-overdue symbolic payback, Samuel’s movie is a revenge story — it’s not so wedded to feigning a sense of just desserts, or commenting on the nation’s bad karma, by way of an orgiastic bloodbath. The fantasy is in the style and concept. If it feels like fan fiction with a well-known cast and a healthy budget, maybe that’s because it is.

The Harder They Fall opens the way many a revenge tale opens: a bloody consecration that sends our hero on his way. Nat Love is just a young boy, untouched by violence, when a man with a pair of golden guns stops by his home and, acting on some debt or sense of retribution, shoots Nat’s father and mother right in front of him, then takes a razor and carves a cross into the child’s forehead. That man was Rufus Buck (Elba) — and he of all people seems least surprised when, many years later, he and the boy with cross tattoo, who’s now a man, cross paths again. By that point, Nat Love (Majors) has got a gang of his own, and he’s been picking Rufus’ cadre off one by one while Rufus himself is stuck in prison. Nat isn’t banking on there being a prison break that sends Rufus straight into his orbit, but it’s almost good that there is one, because as his beloved Stagecoach Mary (Beetz) points out, this bloody pursuit can’t really end for Nat until he gets the main culprit, the guy who ended his childhood in a matter of seconds. 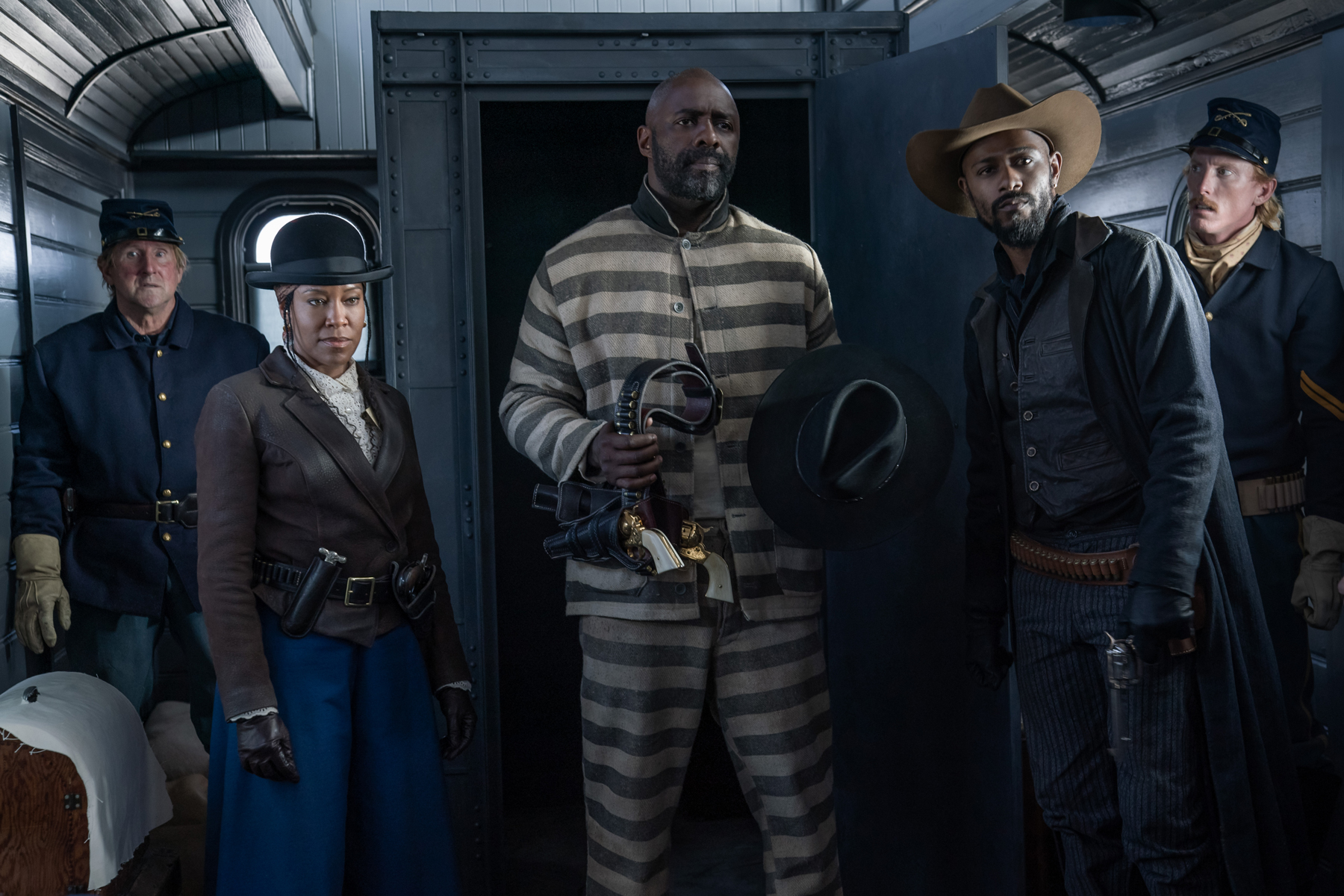 The broad strokes of the story aren’t so original, but the movie wears this with an unmistakable sense of intention. It knows it’s playing us the genre’s greatest hits: a violent stagecoach set-piece here, a swoony bit of maybe-rekindled romance there (with requisite lines like, “I made things. I’ve built things. And I ain’t gonna risk all that just because you came trottin’ back”), a showdown with a sheriff. The movie injects a little freshness by reorienting the historical threat. What encroaches on the frontier community of this film isn’t an anonymous band of faceless Native Americans, as is often the case; and the victims of that imminent violence aren’t white innocents. White land-grabbing — the result of a Black sellout’s backhanded collaboration, to the detriment of this nascent Black community’s survival — is what proves the threat. Here we have a story of a Black freedman town that’s about to get wiped out before it even really gets started. You can see the appeal of a man like Rufus Buck at a time like this. Sure, he has a bad rep. He is a violent man. But that also means he’s a powerful man. And it wouldn’t be the first time, in this genre, that a community rallied — or was forced to rally — behind a bad apple in exchange for protection.

The real Nat Love didn’t have a gang in the way that Rufus Buck — also historically-based — did. In the latter man’s case, that gang was by all available accounts pretty fearsome. More urgently, the real Buck had a political commitment that’s not explored here: a desire to cleanse so-called Indian Territory (now Oklahoma) of its white population, having seen firsthand the effect of that population on its Indigenous forebears. Pitting him against Nat Love in this all-star game of a movie proves for a satisfying match-up precisely because it’s impossible. But it also quietly entails whittling down the real man’s ideas and identity: correcting for one crime of representation by committing another. The pastiche can feel like an attempt to justify this. Maybe it does. But it’s also a symptom of the movie’s desire to tiptoe around the murkier politics of the histories it’s toying with by overwhelming us with its panache and satisfying cleverness. The distraction does, indeed, make a credible case for sticking to the fantasy of it all, to not overthinking it. Not enough to distract from what can feel rote about the script, however; one grows thankful for the likes of Cuffee, and RJ Cyler’s Jim Beckwourth, and the reliably wonderful Stanfield’s dryly funny Cherokee Bill for keeping things buoyant when even fancy camera tricks can’t make up for those stretches of staleness. It’s almost a fault that the story’s secondary characters, even when reduced to great one-liners, nearly walk away with the movie. But the leads get in some good air time, too; actors like Regina King are a pleasure to watch no matter what they’re doing.