Every once in a while, it seems like a good idea to check in with wispy, ultra-happening, Oscar-nominated, New York-living actress Chloë Sevigny, 28, and see what’s up with her, because a lot often is. This time, she’s found smoking a Parliament at some oasis of a Greenwich Village cafe, dressed slinkily in a doily-thin pink dress, and right off the bat she begins offering clues as to her current state of mind. “The waitresses here are weird Eastern Europeans who are really bad at their jobs and don’t even try to be pleasant,” she says. “I like that.”

Sevigny has four movies in circulation at the moment, the newest being Shattered Glass, about the disgraced journalist Stephen Glass, in which she plays a reporter — but the Sevigny performance most on people’s minds is the one in The Brown Bunny, a movie that has no U.S. release date, and never may, but which was recently screened at the Cannes Film Festival and pronounced awful. In it, she gives actor Vincent Gallo a blow job (Gallo also wrote, directed, photographed, edited and produced the hooey), and this blow job is no shadowy simulacrum. Gallo has said that nothing but the real thing would do, given “the complex narrative”; and Sevigny once dated the guy in real life, so her basic feeling was, why not?

“I think it’s a beautiful film,” she says, “but it’s not for everyone. I mean, I think Vincent was dealing with a lot of issues regarding the act of sex. The act can be very animalistic and almost repulsive, even though it’s supposed to be beautiful. When you catch yourself in the mirror having sex with a girl, it can almost be disgusting. I think he was sort of grappling with that and what that’s about. Anyway, he’s a very complicated man, very smart, real eccentric, and his philosophies run every which way from Sunday.”

As it happens, Sevigny seems to have a number of every-which-way philosophies herself. One of them is, never go to sleep wearing underwear, and how she came by it is, her mom. “My mom would always tell me that you never wear panties at night,” she says. “You must air yourself out.” Another is, leisure-time pill popping is OK, in moderation. “I’ve always been a downer kind of girl,” she says, “but I’d never take a handful, only the occasional recreational painkiller or Valium, then have a few cocktails. My girlfriend calls them personality pills. But I am not abusing them in any way, and they are dangerous.” Another is, if you really love wearing the skimpiest of short-shorts on the streets of Manhattan, and she does (“I like short-shorts!”), I’m really into short-shorts!”), then you know what you’re going to hear: “Whistling, hooting and hollering!” Another is, if you’re a good Catholic, like she is, it’s a good thing to get yourself to Mass as often as you can, but feel free to skip confession. “Absolutely,” she says positively. “Myself, I have nothing to confess.”

A big wad of silence then looms, only filled when one of the surly waitresses (who is, perversely enough, not surly at all) steps up and takes Sevigny’s order, which includes fried calamari, a mixed-greens salad and a Bloody Mary. After that, Sevigny toys a little with her spilling blond curls, occasionally cups her right breast (apparently to make sure it’s still inside her thin pink dress) and launches into the tale of serendipity that has landed her where she is. It started in Darien, Connecticut, the most whitebread of Connecticut towns, which she prefers to call Aryan Darien. It was there, in high school, that she was definitely not into field hockey and academics and totally into shaving off her ass-length hair, selling it to some wig maker for $100, spending the money on forty-ouncers and taking the Metro-North commuter train into Manhattan, where she interned at Sassy magazine, hung out with the skate-punk crowd in Washington Square Park and became a club kid who was “just on the brink of being dangerous,” she says. “Also, being into the club scene, all the girls were kissing girls, the boys the boys, and it was a whole free-for-all. I thought it was innocent. If he or she was pretty, I didn’t care, even though I’ve never had a full relationship with a woman. Hey [snicker, snicker] — I’m not Angelina Jolie.”

Around this time, she met yuppie writer Jay McInerney, who was so smitten by her lifestyle and sense of fashion —she was into thrift-shop chic before it was chic to do so — that he profiled her at length for The New Yorker, in 1994, and labeled her New York’s downtown It Girl, “the coolest girl in the world.” “I was a little appalled,” Sevigny remembers. “He was attempting to capture some kind of youth scene, and he just didn’t get it, and he was tailing me around, and it all felt a little creepy.”

Over the years, she has dated guys named Mischa (her first boyfriend, whose dad, she says, was a mime and appeared as the bone-throwing ape in 2001: A Space Odyssey), Joey (“a raver”), a Spencer, a Sam, a Daniel and a Juan from Argentina (“He gave me my first acid, and I did a lot of acid as a kid”). In the early Nineties, she started hanging out with Harmony Korine in Washington Square Park. He was just another skater until, in 1994, photographer Larry Clark asked him to write what would become the wallop-packing movie Kids. And Sevigny was just his hipster girlfriend until Clark asked her to star in the movie as a teenager trying to track down the “virgin surgeon” who gave her HIV. This led to a whole new lifestyle as an indie actress who soon appeared in Steve Buscemi’s Trees Lounge, in Korine’s directorial debut, Gummo, and in Whit Stillman’s strangely moving The Last Days of Disco. Then came her portrayal of Lana in 1999’s Boys Don’t Cry, her Oscar nomination for it, lots of subsequent hoopla and surprisingly little career advancement. She remains an actress always maybe on the verge of bigger things. “I don’t think the Oscar [nomination] did one thing for me,” she says, not unhappily. “People are always saying, ‘Oh, but you were nominated for an Oscar!’ And I’m always answering, ‘Yeah, but so was Mare Winningham.'” 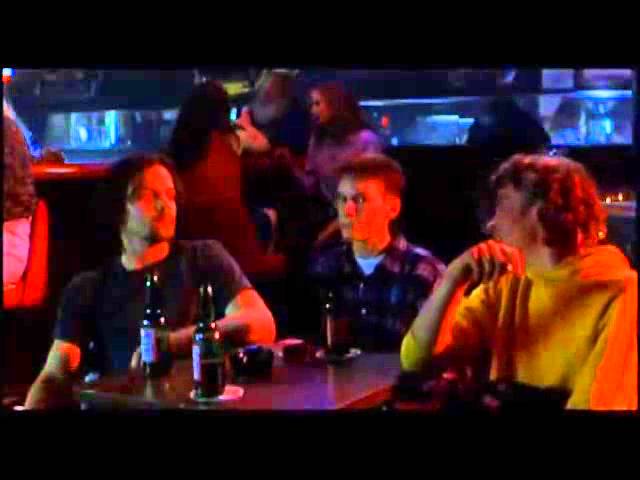 So that’s another thing about Sevigny: She’s got a pretty tasty wit and is not afraid to use it, always in that sly sideways style of hers. There’s much else to recommend her, too. She is in favor of a tidy apartment and does all the tidying herself. She has a lot of fuzz on her arms and once played drums in a band named Fuzzy Peaches. She’s got a hee-haw kind of laugh. She currently lives with Matt McAuley, who plays bass in the band A.R.E. Weapons and sings songs with lyrics such as “Fuck you, pay me, give me my money/Fuck you, pay me, give me my dough.” She can be jealous, almost violently so. “It’s one of my worst traits, and I’m trying to learn how to deal with it. But I did put my hands around a girl’s throat once and say, ‘He’s my boyfriend, you better stay away from him!'” After a night out drinking, she is quite likely to throw up but never asks McAuley to hold her hair back while she does: “I don’t want him to have any negative images of me.” At least once on every plane flight she will break down in tears for reasons unknown. She says she has “issues with self-confidence.” Just yesterday she found out she’d won a role in a Woody Allen movie. “Woody Allen!” she says, thrilled. She finds Benicio Del Toro “very sexually appealing and very manly, too.” But Tobey Maguire? “He’s the next Tom Hanks. Am I right?”

Shortly thereafter, she says, “What kind of person am I? I’m a good person, but I really am trying to be a better person. I’m trying to be less judgmental.” It might help, of course, if Sevigny went to confession, but she is steadfastly adamant about having never done anything (like blown Vincent Gallo on film) or said anything (poor Mare Winningham) that could benefit from a few Hail Marys or Our Fathers.

“It could depend on how you interpret those things,” she says, smiling. “I interpret them pretty loosely. Actually, I interpret them in any way that helps me.” See. It is always worth checking in with Sevigny. She is, and probably always will be, It.