It’s been a little over three months since America watched Peggy Olson strut sassily down McCann Erickson’s hallway, an unlit cigarette hanging from her lips and a painting of a sexually adventurous octopus tucked under her arm. But while we’ve all spent our summer replaying that singularly GIF-able scene and mourning the loss of Mad Men, Elisabeth Moss has already moved on: Since wrapping the hit AMC series, she’s played the titular role in The Heidi Chronicles on Broadway, and has lined up no fewer than seven movies, including an adaptation of Chekhov’s The Seagull, an adaptation of J.B. Ballard’s class-warfare novel High Rise, and Queen of Earth, her second collaboration with writer-director Alex Ross Perry after 2014’s Listen Up Philip.

In Queen, Moss plays Catherine, a young woman who, after the death of her father and a particularly painful breakup, decides to hole up in a lakeside cabin with her best friend Virginia (Katherine Waterston). But the childhood pals immediately engage in a passive-aggressive pas de deux, pointedly insulting each other’s flailing careers and romantic failures until Catherine starts to psychologically crumble. The result is an eerie, darkly comic portrait of mental malfunction and mindfuckery that feels like the product of some unholy union between Who’s Afraid of Virginia Woolf?, Persona, and every other Polanski film.

Though the drama’s bitter bucolic banter is a serious departure from Peggy Olson’s chipper ad-campaign pitches, Catherine herself isn’t much of a shift for Moss, who’s been playing complicated women on the receiving end of violence both emotional and physical since childhood (most recently as tortured detective Robin Griffin in Jane Campion’s critically acclaimed miniseries Top of the Lake, rumored for a second season). We caught up with Moss before Queen of Earth‘s premiere to talk about the movie’s liberating effect on her, why Peggy still resonates so deeply, and whether or not she thinks things are improving for women in entertainment.

Some reviewers are describing this movie as a comedy, others call it a horror film. How’d you interpret it?
Alex [Ross Perry] and I think it’s funny… sometimes. We don’t think it’s funny all the time, but it is an extremely dark comedy. We’ve actually discussed it and we think it should be confusing in a Kubrick-film kind of way. It should be so dark that it occasionally makes you giggle because it’s so out there, you know? If people are disturbed or scared, that’s great; if they giggle, that’s great too. As long as people get the story and are enjoying it, we don’t care what their reaction is. It’s not quite supposed to be taken completely seriously, I think. Although it’s a very serious thing, if that makes sense.

Was that what appealed to you about it?
The arc of the character was so meaty — getting to really portray a descent into insanity, to have no rules or constraints, to be able to go as weird or as far as I wanted to. For me, the opportunity to just fucking play and do whatever I wanted, which is not always the case, and to create something crazy and see what we came up with. It’s the kind of film I’ve never made before — this dark, tongue-in-cheek thriller.

Can you give an example of a scene in the film where Alex let you take things really far?
There’s a scene with an actor named Keith Poulson — we’re sitting in the house, quietly talking, and my character’s definitely, at this point, gone crazy. It was kind of a joke, but at the end of the scene, I said, “You know, I could kill you, and no one would ever know.” I improvised that line, and Keith, bless him, he didn’t crack or break character, just totally took it and nodded. And when we cut, we all started laughing. But it ended up in the film! On a lot of other sets, I would have been way too shy to improvise such a thing. But here, I was doing it almost just to make Alex laugh, and it ended up in the film. 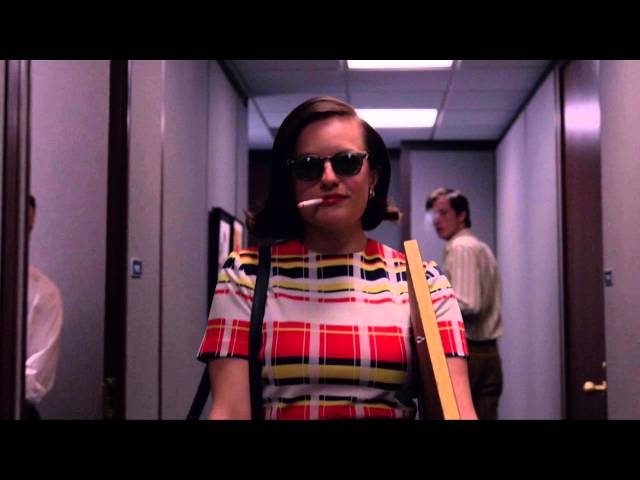 We’ve probably seen that GIF of you sauntering into the McCann Erickson office hundreds of times over the past few months. Why do you think Peggy resonated so powerfully with viewers — particularly young women?
From the very beginning, it was very much my intention to have her be an everywoman, to be identifiable. There were circumstances that were very much of the time, but I wanted to react to them, to play them, as if they were happening to me now. And the fact that she is so identifiable for women today is really interesting. There may not be as much blatant sexual harassment, because there are laws against it now, but women still feel as if they’re in a man’s world. They have to work a little bit harder, take a little more care in how they present themselves. That’s something I’m not sure will go away anytime soon. I had no intention of playing her as a “1960s woman” or a caricature of a secretary. I just wanted to play her as a girl in her twenties.

There’s been a lot of talk about how Mad Men helped initiate this sea change on TV in terms of better roles for women. Did you notice that at all while it was happening?
Oh, for sure. Every year it gets better. If you look at this year’s Emmy nominations, there are so many shows led by a female character. It’s packed to the gills. It didn’t used to be like that. I remember from my days on The West Wing, it wasn’t like that. And it’s not just cable — look at the network shows like Nashville and The Good Wife. All of these shows with lead characters who are women — I feel like that’s fucking extraordinary, and it’s definitely something I’ve watched happen. I can’t say it’s all because of Mad Men, because that’s a ridiculous thing to say. But I think that shows like ours, Damages, The Sopranos…[they’ve] changed the face of TV and have allowed for there to be really strong, interesting female characters.

In terms of pay inequality in the industry, it’s important for actresses like Patricia Arquette or Cate Blanchett to keep talking about it — until it’s all good, we’ve gotta keep saying it. Personally, I don’t feel like I’ve had a career where I’ve been the victim of sexism. I’ve worked with wonderful actors and I’ve had a very lucky path. I’m not like, sitting in the corner, yelling “Down with men!” [Laughs] It’s obviously a larger issue, but thankfully, it’s morphing and changing all the time. I think it’s fantastic that young women are really embracing the idea of being a feminist, which is no longer something to be embarrassed about. I don’t think any of us feel like victims. It’s just a matter of reminding men and women that there are still a few hurdles to cross.

What can you tell me about Top of the Lake’s second season?
Um…nothing.

It’s been confirmed, though, yes?
Nooooo comment [laughs]. A website said that it was confirmed, if you know what I mean. That is all I am at liberty to say. Sorry, I hate caginess and when people are weirdly mysterious about shit, so I apologize for being weirdly mysterious. But I can say doing the first season to this day remains my favorite project. Mad Men doesn’t count because it’s too long — that’s its own thing. Besides that, Top of the Lake is my favorite thing that I’ve ever done. A second season, to me, would be a dream come true.