The spring’s big comic-book movies feature the superhero trend du jour of good guys fighting one other: Batman takes on Superman, Team Captain America versus Team Iron Man. But these all-star team-ups — specifically, Warners/DC Comics’ Batman v Superman: Dawn of Justice and Marvel/Disney’s Captain America: Civil War — are in a fight of their own, and not just to see who can come up with the more unwieldy title.

Related: How Superhero Movies Became Too Big To Fail

For years, DC had the prolific, and sometimes even Oscar-nominated comic book franchises, while its chief competitor’s characters were in cut-rate movies that were less than stellar (or in the case of that infamous Roger Corman production of Fantastic Four, were literally unreleasable). But the beginning of the Marvel Cinematic Universe in 2008 with Iron Man, and the end of Christopher Nolan’s Dark Knight trilogy, turned the tables: Suddenly Marvel was running the table and DC was playing catch-up. The latter’s creation of its own multistrand, multi-movie universe, which begins in earnest with BvS, is a blatant attempt to follow in its opponent’s footsteps. Worse, that precipitous drop-off at the box office after its opening weekend suggested an eager audience was deeply dissatisfied with what they saw, and not necessarily eager to come back for more. Meanwhile, Civil War posted the fifth-biggest opening weekend in history. You win this round, Cap.

There’s no way around comparing Civil War to Dawn of Justice, and not just because the proximity of their release dates is close enough to hold the attention span of the Thinkpiece Industrial Complex. It’s not even because their plots, both of which center around attempts to hold super-powered heroes accountable for the civilian casualties of their world-saving, are eerily similar on the surface. In addition to the larger issues they at least pretend to wrestle with, both movies can be seen as part of an ongoing attempt to deal with the fact that their title characters (or, in the case of BvS, the second character in its title) are — how to put this delicately? — kinda dorky. In his cultural history,Superman: The Unauthorized Biography, Glen Weldon says that, at his core, Superman is “kind, caring, and endearingly square”; in a (since-retracted) 2014 essay called “Why Captain America Is Only Interesting If He’s a Prick,” Vulture’s Abraham Riesman argued that “Cap remains a fundamentally dull character on screen and in the comics: He only grips us because of his place in a larger story, not because his character is inherently fascinating.”

Superman and Captain America, born of the Great Depression and World War II, respectively, were both created when the borders between good and evil were drawn in thick, black ink. Superman was dreamed up by two Jews from Cleveland, an American answer to the Nietzschean übermensch; on the cover of his first issue, Captain America gives Adolf Hitler a sock in the jaw. In the following three-quarters of a century, both characters have been reimagined innumerable times, but they’ve both stayed true to the fundamental decency at their core. And decency, as admirable a quality it may be, can be pretty boring.

It doesn’t have to be that way: For a long time, comic-book do-gooders and their movie counterparts were unambiguously heroic — superheroic, even. Christopher Reeve’s Superman struggled with the burden of his awesome responsibility and his loneliness as the last survivor of an obliterated race, even the ability to form a coherent sentence in the presence of Lois Lane, but he was never tempted to use his powers for anything but good. He’s like a Sunday School Christ, benevolent and all-forgiving, with none of that nasty Old Testament wrath.

Frank Miller’s The Dark Knight Returns, which turns 30 this year, changed all that. His Batman was, to use the now-clichéd terms, dark and gritty, an angry avenger in the vein of Clint Eastwood’s Dirty Harry. In the story’s climax, he engineers a fight with a weakened Superman, using his human cunning and advanced technology to gain a tactical edge over the Man of Steel. (Snyder drew heavily — very heavily — on Miller’s imagery for the final battle in Batman v Superman.) But in the wroter-artist’s telling, the Caped Crusader’s real advantage is his anger, which gives him a focus and a strength of purpose his goody-two-shoes opponent lacks. “You always says yes, to anyone with a badge, or a flag,” Bruce Wayne sneers as he rains haymakers on his opponent’s once-invincible chin. “It’s way past time you learned what it means to be a man.”

Along with Alan Moore and Dave Gibbons’ Watchmen, whose first issues were published in the same year, The Dark Knight had a seismic effect on the world of comics — and especially how they were perceived from the outside. Mainstream media outlets published innumerable articles on comic books’ embrace of “adult” themes, all headlined with some variation on “Bam! Pow! Comics Aren’t Just For Kids Anymore.” In 1989, Tim Burton’s Goth-tinged Batman cemented the triumph of the tortured vigilante hero, and although that series, like the Superman movies before it, soon devolved into camp, its influence held. While Christopher Nolan’s The Dark Knight took the character to even darker, grittier depths, the man defending truth, justice and the American way languished in development hell, with five attempts to revive the character for the screen withering on the vine, and 2006’s Superman Returns failing to reboot the franchise.

That’s the MCU’s blessing and its curse. It’s now so big that it’s created its own rules. Critics call Civil War “the best Marvel movie yet” without addressing whether that means it’s actually, you know, good.

Captain America fared even worse. Before finding his place in the Marvel Cinematic Universe, his only previous big-screen outing was a 1990 movie so bad it still hasn’t been released in the U.S. (It survives mainly as a trivia owing to the fact that the lead was played by J.D. Salinger’s son, Matt.) The failure of Marvel’s pre-MCU attempts had many roots, but the guy with the red, white and blue shield presented a special problem: How do you make the embodiment of American values, you know, cool?

The MCU’s answer: Essentially, you don’t. Chris Evans’ Cap is a literal throwback, a freeze-dried remnant of an earlier, simpler age. Rather than trying to soften his squareness, the movies poke fun at it: A canny cut-in from The Winter Soldier shows him eying a to-do list of pop culture catch-up that includes disco, the history of the Berlin Wall, and “Nirvana (Band).” He’s surrounded by cynics, including Scarlett Johansson’s Black Widow and Robert Downey, Jr’s Iron Man, but he’s steadfast, defending his ideals even if, as becomes increasingly the case, that means standing against the very authorities who created him. Civil War makes Cap a rogue agent, hunted by his own government, and yet he’s still the good guy. 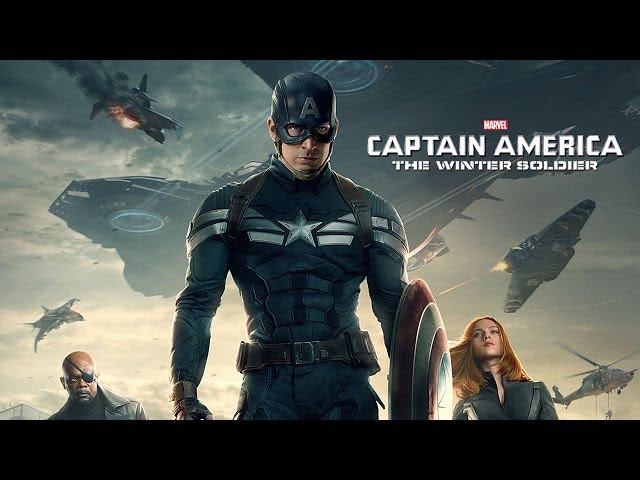 The Superman of Zack Snyder’s universe has been, in a word, Batman-ized. Man of Steel gives Henry Cavill’s Kal-El a thorough grounding in Midwestern values: “”I’m from Kansas,” he says at one point. “I’m about as American as you can get.” But his is a post-9/11 America, where principles are negotiable and ideals only get in the way. He seems blithely unaware of the cataclysmic consequences to Metropolis during the movie’s climactic battle, which ends with him snapping his opponent’s neck. In Batman v Superman, he’s memorialized as the city’s savior, but Bruce Wayne is the one who’s concerned with counting the bodies.

In essence, Marvel and DC were faced with a similar problem, but their solutions are almost mirror images of each other. Snyder, who’d previously adapted DC’s Watchmen, made the Caped Crusader an antihero, or something close to it: The job of saving the world, at least, looks a lot less fun than it used to. But the Marvel movies’ Captain America is an anti-antihero, a person who, confronted with a world riven by corruption and split by political interests, still chooses to be who he’s always been. It’s easy to confuse complexity with dourness, but in a world where there’s so much to feel down about, holding to your ideals is truly complicated.

One thing — possibly the only thing — Batman v Superman does better is to take stock of the damage. Civil War gives us a quick montage of the wreackage left in the Avengers’ wake, and adds a few more to the balance sheet when Scarlet Witch allows a bomb to detonate inside a diplomatic enclave. But the movie’s only real outside perspective is provided by its villain, who lost his family during the Sokovia battle at the end of Age of Ultron. BvS actually restages its predecessor’s climax, only this time we see it from ground level, with Bruce Wayne watching helplessly as his office towers are decimated while Superman and Zod fight each other in the sky. The monument to Metropolis’ dead pointedly evokes the Vietnam memorial, with each name chiseled into stone.

And then it largely fumbles the ball from there, with issues of morality and responsibility getting lost in a blizzard of incomprehensible plot turns and unexplained motivations. Batman and Superman end up fighting each other not out of principle but because they’ve been manipulated into doing so by Lex Luthor, whose primary goal is to treat the world’s most powerful heroes the way a child treats action figures. It doesn’t help that a movie built around mano-a-mano conflict was also drafted to be the cornerstone of DC’s late-to-the-game expanded universe, with Gal Godot’s Wonder Woman shoved into the final fight and the Justice League’s other eventual members given fleeting, pointless cameos. It’s trying to stuff a dozen movie’s worth of world-building into the cracks, and to say it’s an awkward fit would be too kind.

Marvel’s cast of characters, by contrast, has gotten so big that you almost don’t notice the new faces at the party. Civil War introduces Chadwick Boseman’s Black Panther and Tom Holland’s Spider-Man, both slated to be the stars of their own movies in the near future, to the extent that Cap almost becomes a supporting player in his own movie: If it had been called Avengers 3, no one would have blinked an eye. That’s the MCU’s blessing and its curse. It’s now so big — Civil War is its 13th movie, with another nine planned in the next four years — that it’s created its own rules. Critics call Civil War “the best Marvel movie yet” without addressing whether that means it’s actually, you know, good.

DC’s movies have longer shadows to outrun: Richard Donner’s Superman, both Nolan’s Batman and Tim Burton’s. But they’re also too closely tied to Snyder’s own style, which isn’t something other directors can, or should, ape. His over-the-top grandiosity has a crude poetry to it, but it’s a welcome sign that David Ayer’s forthcoming Suicide Squadhas gone back for multiple rounds of reshoots, reportedly to add more humor in contravention of DC’s unwritten “no jokes” policy. The Marvel movies are lighter, both tonally and visually: The difference between BvS and Civil War is literally night and day. But they’re also more self-aware, cracking in-jokes about how Peter Parker’s Aunt May has been changed from a wizened old woman to a sexy Marisa Tomei.

It’s impossible to imagine the DC equivalent of, say, Guardians of the Galaxy, although the company’s TV outposts, especially The Flash, artfully balance heightened emotions and goofy fun. Snyder’s big-screen universe is a grimmer one, and that’s not necessarily bad — but it’s definitely more monotonous, and feels like it’s painted itself into a corner after only a couple of films. What makes the MCU work is that every principle character has not only their own personality but their own style, distinctive enough to make their standalone movies feel self-contained (or at least semi-contained), but not so disparate that they can’t play in the same sandbox. It isn’t just size that makes a universe: It’s variety, and DC needs to find some more crayons in the box if they want to keep colouring.