Over the past half-century, Terry Gilliam has lived several lifetimes — first as the mastermind behind the surrealistically satirical animations on Monty Python’s Flying Circus and then as a filmmaker with an unparalleled, singular imagination. His oeuvre contains everything from literary flights of fancy (Jabberwocky) and kid-friendly fantasies (Time Bandits) to dystopian epics (Brazil and Twelve Monkeys), kaleidoscopic romps (The Adventures of Baron Munchausen, Fear and Loathing in Las Vegas) and the occasional slightly warped drama (The Fisher King, Tideland).

Now 74, Gilliam looks back on his life achievements, as well as his early years growing up in rural Minnesota and L.A., in his recently released, beautifully illustrated autobiography, Gilliamesque: A Pre-Posthumous Memoir. It’s chock-full of revelations about the Pythons’ relationship with the Beatles, the fragility of Fisher King star Robin Williams, the insanity of Hollywood’s studio system and much, much more. Here are 12 of the best.

1. He crossed paths with Woody Allen and R. Crumb in his pre-Python years
In the early Sixties, while working at New York–based Help! magazine (run by Mad man Harvey Kurtzman), Gilliam made fumetti strips: paneled comics made with photos. One, titled The Unmentionables, featured Woody Allen when he was still best known as a stand-up comic; another starred his future Python colleague John Cleese, whom he met when he was in New York as part of a fringe theater troupe. While at the magazine, he also took illustrator Robert Crumb up to Harlem for an early illustration. “It was obvious from very early on that Bob was going to be a star,” he wrote of the iconic underground cartoonist. “The funny thing was, he seemed to think I was the cool one.”

2. An early idea for Brazil came from visiting Disneyland
Gilliam and British journalist Glenys Roberts visited the theme park on a press trip to check out the just-opened Pirates of the Caribbean ride. “When we arrived at the special place where the special people enter, we were told that the head of security would have to come down and vet my [long] hair, because [this] guy…who looked like an FBI agent had put in an alarm call,” he wrote. “As I waited, seething at the gate, I became aware – for the very first time – of the barbed wire around the entrance.” Gilliam also noticed that “it was only on the privileged fringes that the subliminal Auschwitzness of the place started to become apparent, especially when we were informed that we weren’t going to be allowed in because ‘the company has a grooming policy.’ The idea for Brazil was born out of several different moments of extreme alienation … and this was definitely one of them.”

3. The “violence” in his Python animations came from a primal place
After proving himself as an animator at the behest of Eric Idle on the pre-Python show Do Not Adjust Your Set, Terry Jones suggested Gilliam create animations as interstitial elements on Monty Python’s Flying Circus. Over time, he developed his “Gilliamesque” style; the herky-jerky nature of his between-skit bits was a byproduct of the fact that they had to crank out so many episodes. In the book, he writes about how the other troupe members were “incredibly precise in their verbosity” while his boorish American attitude stood out in the group. “Some of the violence in my Monty Python animations would come from my frustration at not being able to express myself as clearly as everyone else, and some of it evolved naturally from the limitations of the technique itself,” he wrote.

4. Stanley Kubrick wanted to work with Gilliam on A Clockwork Orange and The Shining
The filmmaker sent Gilliam a note asking for an animated title sequence for A Clockwork Orange, but the deadline was too short for him to get it done. Similarly, Kubrick approached the Python to help him find an art director for The Shining. But because the director’s request came with untenable specifications – he wanted “a perfectly realized set drawn in something like 15 minutes,” Gilliam wrote – the animator was unable to help the man he described as his “Paths of Glory hero.”

5. Gilliam turned down the opportunity to make a Beatles-themed movie for Jabberwocky
A producer asked him to work on a musical film called All This and World War III, which was “going to use a lot of Beatles songs.” Although Gilliam loved the band, he instead convinced the producer to help him make his solo directorial debut, 1977’s Jabberwocky.

6. A Beatle helped make Monty Python’s Life of Brian
George Harrison was a massive Monty Python fan who could recite each sketch by heart, eventually befriending Eric Idle. When EMI pulled the financing for Life of Brian, Idle asked the musician for financial help — to which the former Beatle merely replied “done.” “And that was it,” as Gilliam wrote. The film served as the first feature to be produced by the Harrison’s HandMade Films company, which would later be responsible for Gilliam’s Time Bandits.

7. Brazil’s plastic surgeon was inspired by an experience Gilliam’s father had
Brazil’s cosmetic surgeon Dr. Chapman, played by Time Bandits and Munchausen actor Jack Purvis, uses acid as his instrument. In Gilliamesque, the filmmaker explains that the idea came from seeing his father endure a similar operation. “In the late Seventies, my dad had been through a nightmarish experience when a patch of skin cancer was discovered on his ear and a highly recommended surgeon applied acid to it, then put a compress over the top and advised him to go sit outside in the park for an hour or two while the acid worked its magic,” he wrote. “By the time my dad came back into the surgery, the very edge of his ear was still there, but the whole lobe had been eaten away.”

8. Robert De Niro took method acting to bizarre limits for Brazil
The Taxi Driver actor believed in Brazil so much that he accepted the role of pipe-diving Harry Tuttle, even though it was smaller than the one he originally wanted, Jack Lint. (It went to Michael Palin.) Before stepping on set, De Niro took research to a whole new level. “He was so utterly thorough in his preparation that he had a friend who was a brain surgeon whose operations he was sitting in on (because I’d described Harry’s precision as a repairman as ‘surgical’),” Gilliam wrote. “Imagine coming out from being under anesthetic after brain surgery and the first person you see is Robert De Niro!”

9. Marlon Brando almost appeared in The Adventures of Baron Munchausen
Gilliam met the Godfather actor, whose head was “bigger than Richard Nixon’s,” according to the filmmaker, to consider him for the role of Vulcan in L.A. Things quickly took an odd turn: Brando told a ribald story about daring Sophia Loren to touch her toes so he could pantomime sex behind her while filming A Countess From Hong Kong. The actor, who’d grown quite heavy by that point, then tried to attempt to touch his own toes for Gilliam. “What fascinated me was the realization that Marlon Brando actually cared what we thought of him,” he wrote. Ultimately, the role went to Oliver Reed.

10. Robin Williams wanted more Robin Williams in The Fisher King
When the star finally saw a cut of the movie, he did not like the way an emotional scene in which his character takes Amanda Plummer home was edited. “Robin worked his arse off on that scene … he poured his heart out,” Gilliam wrote. “The camera just stays on Amanda’s face as this tear begins to well up in her eye and then drops. ‘Robin, I don’t need to see what you’re doing,’ I reassured him, ‘because we’re seeing the result of what you’re doing, and that’s so much more powerful.‘” 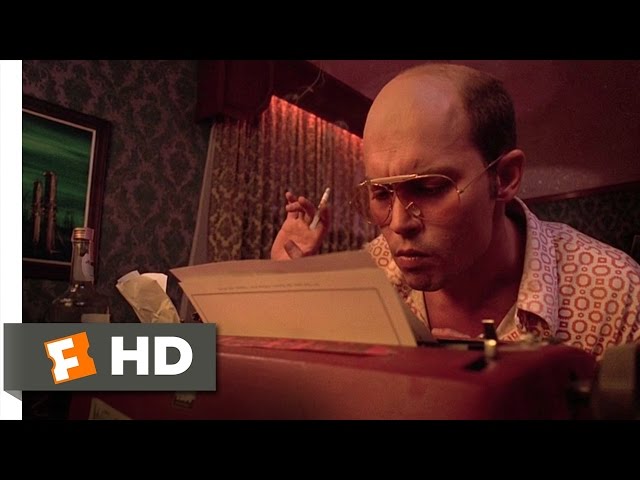 11. Johnny Depp’s portrayal of Hunter S. Thompson in Fear and Loathing in Las Vegas was accurate
“[Johnny] had actually lived in [Thompson’s] basement in Aspen for a while – just absorbing Hunter, stealing any kind of talisman he could touch or feel,” Gilliam wrote. “He wore his shirts in the film, at the start of the shoot, he even took his car – the Red Shark – and drove down to Vegas in it. Johnny really loved Hunter, and of course the feeling was mutual. … In the end Johnny’s performance was absolutely spot on. Some people complained that he was too much of a ‘caricature,’ but they’d obviously never met Hunter.” (Gilliam also describes getting Thompson to see the film was “like trying to lure a coyote into a phone booth.”)

12. Gilliam wanted to give up when he’d heard Heath Ledger died
The actor died of drug-induced cardiac arrest during the making of Gilliam’s The Imaginarium of Doctor Parnassus, having previously co-starred with Matt Damon in the filmmaker’s The Brothers Grimm. “It was beyond horrible,” Gilliam wrote. “It was impossible, unbelievable, unbearable…I just said, ‘I don’t give a fuck about the film. I give up. I’m old and tired and worn out and I want to go home.’ Luckily, I surround myself with people who don’t listen to anything I say.” The director’s daughter, Amy, co-produced the film and encouraged him to keep working on it with Ledger’s friends filling in for the role. Ultimately, Johnny Depp, Jude Law and Colin Farrell helped complete the movie, giving all their fees to Ledger’s daughter. “Heath’s spirit seemed to be infusing all of us,” he wrote. “In fact, when we finished Dr. Parnassus, I thought it was one of the best things I’d ever done.”