It’s taken three decades, relentless pressure from the hardcore fan community, and a box-office phenomenon known as the “Keanuassaince,” but Bill and Ted, the time-traveling heavy-metal enthusiasts who embarked on their first excellent adventure as high schoolers in 1989, are finally returning to theaters this summer. When we last saw them, in the 1991 sequel film Bill & Ted’s Bogus Journey, Bill S. Preston, Esquire (Alex Winter), and Ted “Theodore” Logan (Keanu Reeves) were on the verge of creating music that would usher in a new era of global harmony and world peace. But at the start of Bill & Ted Face the Music, their third (and almost certainly final) adventure, due out August 28th, none of that has happened. They are middle-aged suburban dads playing tiny bars and struggling to understand how things went sideways.

“We wanted to ask, ‘What would happen if the things that you were told your life was going to be about when you were a teenager turned out to be wrong?’ ” says Ed Solomon, who wrote all three Bill & Ted movies with his partner Chris Matheson. “ ‘How would you cope with it if you based your whole life on it? How would you deal with the disappointment? And how can we make that into a movie that is absurd and silly and embodies the buoyant spirit of Bill and Ted?’ ”

Answering those questions would depend on the willingness of Reeves, now in the middle of a major career resurgence thanks to the lucrative John Wick franchise, to return to a dimwitted character he hadn’t played since his early twenties. “People’s enthusiasm for the characters became very evident to me,” Reeves says. “But there had to be a reason to do it, and I think Ed and Chris came up with a really great story.”

That story concludes a journey that Solomon and Matheson started back in 1983, shortly after they graduated from UCLA. Spitballing ideas in an improv group they had formed, Matheson suggested “a couple of teenage boys who don’t know anything about history, and they’re studying for a course.” They played Bill and Ted onstage in a show, declaring various world events “excellent” or “bogus,” and began envisioning the duo as a small part of a Kentucky Fried Movie-esque sketch-comedy film.

But when Chris’ father, Richard Matheson (a legendary sci-fi author best known for I Am Legend and The Shrinking Man), heard their concept, he told them it was strong enough to hold a movie on its own. “Chris and I then started really laughing about this idea that Bill and Ted would be literally responsible for all the bad things that happened in history,” says Solomon, “like the sinking of the Titanic, and Lincoln’s assassination, and losing Amelia Earhart.”

Slowly, they fleshed it out into a screenplay called Bill & Ted’s Time Van, where the guys travel through time collecting historical figures to help them pass a history test. In the second draft, they raised the stakes by deciding that all of civilization was hanging in the balance, because the pair are destined to grow up and start a band that unites mankind. “We thought, ‘What if Bill and Ted were actually the most important people who ever lived?’ ” says Solomon. “That really cracked us up.” 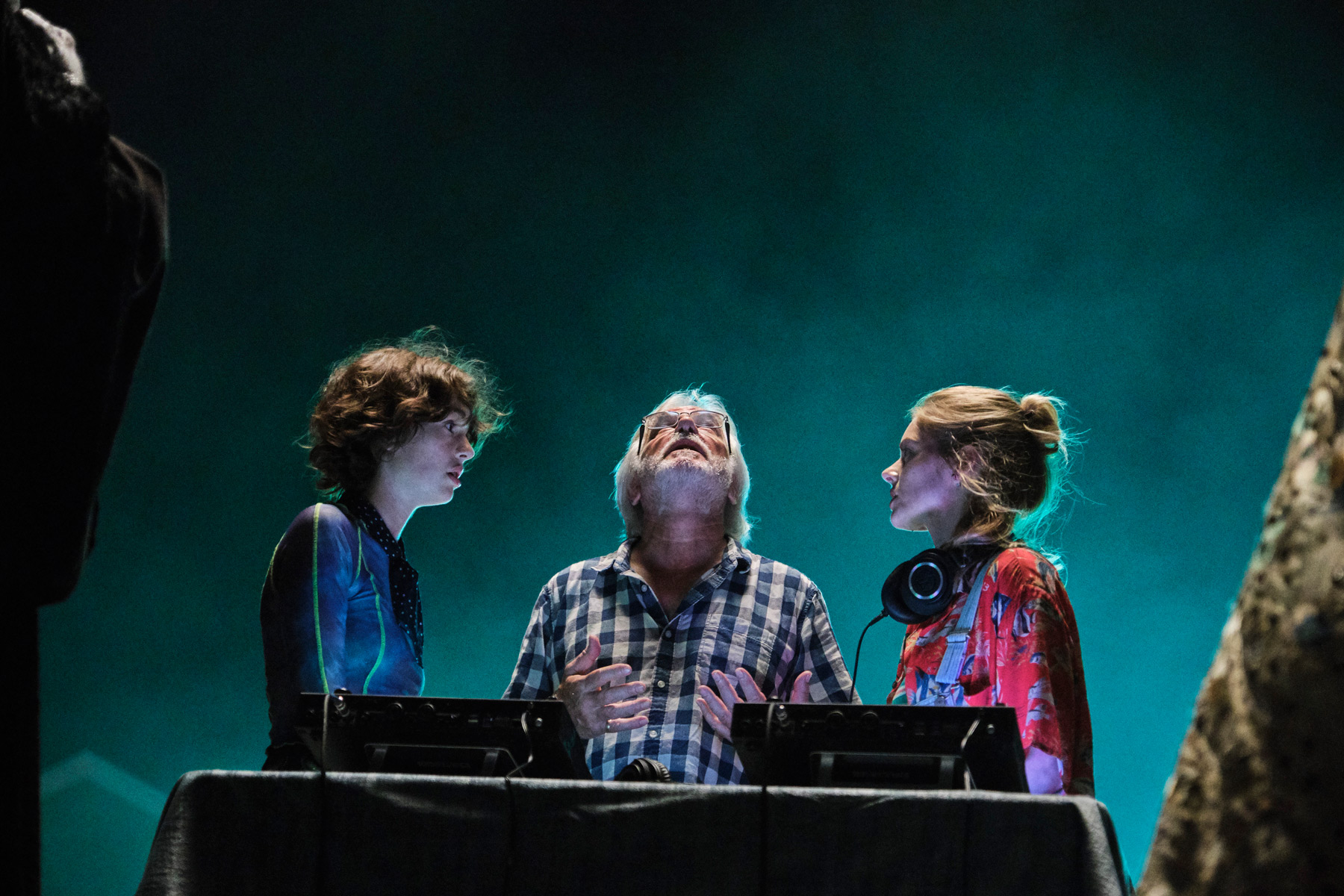 Back to the Future’s use of a time-traveling DeLorean in 1985 forced them to change the title to Bill & Ted’s Excellent Adventure, with a phone booth now serving as their means of transport. And much to their shock, De Laurentiis Entertainment Group bought the script and cast Winter and Reeves as the leads. “When you were our age in those days, a lot of the material you got was very John Hughes-like,” says Winter. “You’re playing a 16-year-old who talks like a 40-year-old, with neuroses and sexual hang-ups. And here were these guys that went the other way. They were like nine- or 10-year-olds with this extraordinarily complex language. I’d never read anything like that.”

Crucially, Reeves and Winter were tight from the get-go, and their chemistry bled onto the screen. “We bonded during the auditions since we both played bass and rode motorcycles,” says Winter. “The hilarious idiosyncrasy of our friendship is we would actually jam together on our basses in our free time.”

In the movie, the boys meet Billy the Kid, Socrates, Joan of Arc, and other historical giants, and bring them to modern-day San Dimas, California. The budget was minimal, and, clever screenplay aside, nobody thought they were making a masterpiece. “I remember shooting the Socrates scene in Rome,” says Winter. “There was traffic noise everywhere, because we were shooting in the Piazza Venezia, which is like shooting in Times Square. And I remember Keanu and I looked at each other, and said, literally right before they called action, ‘Dude, no one’s ever going to see this movie. Nobody’s ever, ever going to see this movie.’ ”

It came out on February 17th, 1989, and made $40.5 million on a budget of $6.5 million. Solomon and Matheson were soon tasked with writing a sequel. Orion Pictures’ suggestion: Bill and Ted study for an English test by traveling through the history of literature and meeting the likes of Romeo and Juliet and Huck Finn. But Solomon and Matheson had little interest in a retread.

Instead, they wrote Bill & Ted Go to Hell, in which the buddies die in the first 20 minutes and travel to the underworld, where they befriend the Grim Reaper and bring him into their band as a bass player along with a hairy alien named Station and robot doppelgängers. There is no time travel or historical figures. The studio insisted they remove the word “hell” from the title, but wanted to start filming in January 1991 and get it into theaters just six months later, so there was no time to change anything else. “It’s like what Neil Young says about driving your car into a ditch after a hit,” says Winter. “There were people who were scratching their heads a little going, ‘Where was the booth?’ ”

They also didn’t have the budget to completely fulfill Solomon and Matheson’s grandiose vision, and some of the most wildly imaginative scenes were dropped. “At one point, there were supposed to be huge rabbits coming after us in a highway car chase,” says Reeves. “The ambition of these films is always larger than the business appetite. Eventually, I started calling the second one ‘Bill & Ted’s Omitted Adventure’ because we got page after page that just read, ‘Omitted.’ ”

Solomon and Matheson both look back at the movie with some regret (“We never quite got it right,” says Solomon), but scenes like Bill and Ted playing Death in a high-stakes game of Twister were just as funny as anything in the first movie, and it grossed $38 million. In the aftermath, Reeves became a superstar thanks to Point Break, Speed, and the Matrix trilogy, while Winter found success behind the scenes, directing TV shows and tech documentaries like Downloaded and Deep Web. Solomon, meanwhile, wrote the first Men in Black and the Now You See Me films.

Everyone stayed close as the years went by, but a third Bill & Ted movie was never discussed until about 15 years ago, when a reporter asked Reeves on a red carpet if he would ever do it and he didn’t rule it out. “There was a little crack in the armor,” says Solomon, “and we went, ‘Hey, it’s actually a possibility.’ ”

They all gathered at Winter’s house for a barbecue in 2008 to toss around ideas, and Reeves was enthusiastic enough about revisiting Ted as a middle-aged man that Solomon and Matheson started work on a spec script. When they finally took it to the studio, interest in a third chapter with Reeves and Winter was practically nonexistent. Executives told them that the characters have almost no following overseas, and the original movies didn’t make enough money to justify another one all these years later. “They were cult-y movies,” says Matheson. “To the degree that there was any interest, it was more like, ‘Well, now their kids need to [do] a history report, so it’s a big family adventure to help the kids pass the history class.’ We could have gotten that off the ground, but we didn’t want to do that.”

They went public with the idea for Bill & Ted Face the Music, and fans started petitions and letter-writing campaigns, but the funding never came through. “It was really frustrating,” says Solomon. “We kept getting to the altar, to the part where they go, ‘You may now kiss the bride.’ And we’d pull up the veil, and instead of the bride, it’s just a skeleton that crumbles into dust. That happened quite a few times.”

Opinions vary as to what finally pushed things over the edge last year. Solomon points to a couple of wealthy outside investors (David Haring and Patrick Dugan) who stepped in, while Matheson points to Reeves’ renewed box-office appeal. “It was John Wick that did it,” he says. “Once those movies started exploding, another Bill & Ted movie started looking different.”

Filming began last summer in New Orleans, but they had just 37 days to shoot and half the budget they originally envisioned. “I didn’t know how the hell we were going to do it,” says director Dean Parisot. “It felt like a foolish enterprise. We were going to hell, the future, and all across space and time. Those are big movie elements. I think we solved it by focusing on things that are less about spectacle and more about character.”

The movie brings back many familiar faces, including Ted’s dad (Hal Landon Jr.), his ex-wife Missy (Amy Stoch), and the Grim Reaper (William Sadler), along with Saturday Night Live’s Beck Bennett as Ted’s younger brother Deacon, Kristen Schaal as the daughter of George Carlin’s character Rufus, and rapper Kid Cudi as himself. Samara Weaving and Brigette Lundy-Paine play Bill and Ted’s rock-obsessed daughters, respectively, but the core of the movie is the unbreakable friendship between the men as they travel through time (and back into hell) trying to determine why they have yet to fulfill their destiny.

“Ted’s a little down at the beginning, and that was surprising because he was always ebullient,” says Reeves. “But in a weird way, his being down is part of the engine of us moving forward. We’re super symmetry. If I’m velocity, Bill is position. And so when I was down, it forced Bill to lift us up. It creates a dramatic journey for the characters.”

It’s still unclear as of this writing just how many theaters will be open for the movie’s release. The Bill & Ted camp is prepared for many fans to see it via video on demand, though a bit disappointed by that thought. “To not have that opportunity to have the experience of going to the cinema,” says Reeves, “and going to see a comedy, sharing that breath and those pheromones and that laughter, is definitely a loss.”

But no matter what happens financially with Bill & Ted Face the Music, don’t expect to see a fourth one at any point down the line. “I wouldn’t sign up for it, and I can’t imagine the guys signing up for it,” says Matheson. “The only potential path forward is with their daughters.”

“Could somebody conceivably want to do that?” he continues. “Why not? If they found the young women versions of me and Ed in 1984, a couple of 25-year-olds who are amused by each other and are funny and come up with it, why not? That would be great. But I don’t have anything more to say about Bill and Ted myself.”