Sure, the West Coast prequel Fear the Walking Dead was a fine summer diversion (and may one day develop into a must-see show), but let’s be honest: Zombie-lovers have mostly been drumming their rotting fingers since March, waiting for the original to come back.

This Monday, Rick and Carol and Glenn and the rest of TWD‘s ragtag band of survivors finally return, for the first of 16 Season Six episodes (to be split, as always, into two eight-episode batches). And while the fifth season ended with most of the characters in one place for a change — and relatively secure — let’s take a moment to recall exactly where we left off, and to prepare for whatever horrors may await the living in the weeks ahead.

The old Rick is back…

The Walking Dead‘s main, morally tortured protagonist Rick Grimes was forced into a leadership role early in the series, then backed away from the helm as soon as he felt like his little circle of friends and fellow travelers had stabilised. But last season, when his group was invited to join a mini-society of sophisticated suburbanites in the well-stocked, well-fortified “Alexandria Safe Zone” — the old Rick reared his head again. Our hardened hero hatched a coup-plot, taking the job of constable so that he could gain access to an arsenal and work behind the scenes to save Alexandria’s dangerously naive residents from themselves. 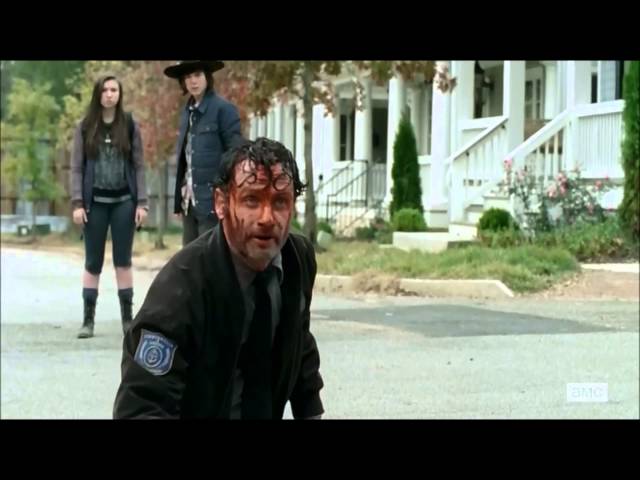 The mutiny was eventually exposed, and a kangaroo court convened to decide what to do about Grimes. But in the finale, Rick proved his indispensability when he re-killed a “walker” that had wandered in through a breach in the perimeter, and then bumped off a sword-wielding, wife-beating surgeon named Pete for good measure. Everything’s out in the open now: Rick has declared his intentions to teach this community how to survive, whether they want to follow him or not. And in Sunday’s premiere, he tries to get them to rally behind him for one of the boldest zombie-disposal plans these folks have ever attempted.

… But not everybody likes the old Rick…

Alexandria already has a leader in Deanna Monroe, a former U.S. Congresswoman who’s been striving to turn her domain into a model for civility in a post-apocalyptic world. It was Deanna who wanted to exile Rick — though she was also the one who urged him to exterminate Pete when the doctor lapsed into a murderous rage. Once the excitement over Rowdy Rick fades, the town’s matriarch may want to revisit her original plan to keep him contained. She may also have an ally in Michonne, an expert zombie-slayer who’s been softening lately, seduced by the idea of living a calmer life in the ASZ.

And then there’s Morgan Jones, the cryptic figure who starts out the new season as a regular — or at least as much of a regular as anyone can be on a show that routinely kills off its characters. Morgan’s just arrived in Alexandria, having developed a zen calm and some serious combat skills since Rick last saw him. It looks like he may act as a check against his old friend’s new tendency toward chilly ruthlessness.

… And meanwhile, the rest of our heroes are making new friends

When our little makeshift family agreed to become part of the safe zone, they did so with a cocked eye, having been burned before by promises of a better, safer life. Over time, however, they’ve started forming connections with the Alexandrians. Daryl has become one of the community’s “recruiters,” alongside the man who brought them to the area in the first place: the kindly, brave Aaron. And though Glenn had a brutal brawl with cowardly supply-runner Nicholas outside the walls, they ultimately decided to bury the hatchet (figuratively, for a change).

And then there’s Carol, who’s become a cookie-baking happy homemaker and chum to all… although we the home viewers know that she’s just putting on an act, and that she’s really on her guard, ready to surprise her new neighbors with her ferocity whenever she must. As the new season begins, she’s still maintaining her air of passivity. Knowing Carol and her deep dark streak, this masquerade can’t go on much longer.

Get ready for zombie inflation

Season Five started with zombies overrunning the false sanctuary of Terminus, and ended with another horde at an abandoned cannery. But in the episodes in-between, the threat of flesh-eating monsters took a backseat to matters of politics and power-grabs among the humans. The Walking Dead‘s co-executive producer/effects supervisor Gregory Nicotero has promised a lot more, well, walking dead in Season Six, taking advantage of digital effects and a fundamental shift in storytelling to fill the screen with reanimated corpses. Or to put in another way: Now that Rick’s in proactive mode, expect less hunkering down and more hunting. As if to prove that point, Sunday’s season premiere opens with a wild, horrifying sequence involving a herd of hungry, rotting walkers.

Brace for other kinds of threats, outside the wall

Not long after arriving in Alexandria, Rick’s group started noticing oddities while out on patrols — like the flashing of strange lights off in the distance, and the occasional disabled walker with the letter “W” carved into its forehead. By the end of the season, we’d met the source of these cryptic symbols: They’re called “Wolves,” and they’re good at luring humans into zombie-filled traps… for reasons as yet unknown. In the finale, they’d found photos of Alexandria, which means they may be closing in on the neighbourhood, or may be taking what they’ve learned back to their own home-base. Either way, as Rick keeps stressing, it’s going to be impossible for the ASZ to rebuild society properly until they reckon with whatever enemies may be organising just beyond the packs of snarling creatures milling around nearby.

If the show sticks close to the comics, expect some lasting changes

Even though the writer of The Walking Dead comics, Robert Kirkman, is one of the show’s main producers, he hasn’t really demanded that the TV version copy his graphic novels beat-for-beat. Instead the series has been following the creator’s rough outline, with the first five seasons covering more or less his first 78 issues. If it stays on its current course, then like its print counterpart, the TV narrative is going to straighten out considerably, leaving behind the desperate wandering of the early stories in order to move toward… well, something else. (For the non-readers, it’d be wrong to spoil what might be coming.)

Not every Walking Dead fan likes the direction the comics have gone in. But even those who prefer the older stuff can admit that the books’ more recent arcs have dropped what had become a too-predictable ebb-and-flow — where the survivors find a new location, stay there for a handful of issues, and then something or someone ruins everything and people die. If Kirkman keeps adapting his own source material, the show ought to start doing some actual world-building. Characters could stick around for a while, and locations get built up instead of destroyed.

Currently, the comic books are up to issue #146, which means that there’s about four seasons’ worth of material that the television TWD could still use. A lot of it is bold, exciting stuff, too, and very different from what’s come before. It should be pretty clear by the next mid-season break whether the TV show is slowly shambling to the same place — and if we’re going to be making our weekly Sunday home in Alexandria for the next few years.