Meet the men and women who work behind the scenes to make big concerts happen. Showtime’s new series Roadies comes from the mind of Cameron Crowe, the former Rolling Stone reporter and writer-director of the modern-movie classics Say Anything…, Jerry Maguire and Almost Famous. His light touch and decades of insider experience make this the rare showbiz saga that’s more quirky and heartfelt than shocking and grim. The first episode airs Monday, June 27th on Stan, but before you give it a spin, here’s everything you need to know. Get those lighters up in the air and rock on.

So Roadies isn’t just about roadies?
Contrary to the show’s name, only one of the major characters is a roadie — and even she’s thinking about quitting when the story begins. Kelly Ann (played by Green Room’s Imogen Poots) is a young idealist who’s spent the summer on the road with the fictional Staton-House Band. Though she’s a music-lover, she’s worried that seeing how the sausage gets made is spoiling her appetite. So in the first episode, the heroine’s preparing to leave her backstage job to go to film school, before one eventful day forces her to rethink her plans.

The rest of the main cast is filled out by several folks who never coil a cable or lift an amp. Luke Wilson plays Bill, the Staton-House Band’s beleaguered tour manager; Carla Gugino is Shelli, the production manager. They work in tandem as the bosses of this motley crew, which also includes Luis Guzmán as a bus driver and comedian Ron White as a kind of spiritual guru and roadie emeritus. And then there’s Rafe Spall, who plays the officious and very English Reg Whitehead, a business consultant brought in to make this whole traveling circus more efficient. In other words, while the men and women who move amps and sett up lighting rigs do get a titular shout-out, the series depicts more of a 360-degree look at big time rock ‘n’ roll as a massive machine with a lot of moving parts. Setting up the equipment is only a small part of what the support staff does.

This fictional band is a big-time, arena-filling rock act, yes?
Indeed. Because Crowe spent his youth following the likes of Led Zeppelin and The Eagles across America (as fictionalised so wonderfully in Almost Famous), he understands first-hand how these large-scale operations work. There’s a hugeness to Roadies that sets it apart from the typical tale of life on the road, from the cavernous locations to the small army wielding walkie-talkies who ensure gigs go off without a hitch. The winding coliseum corridors and sizeable crews keep the show lively, and prevent the audience from getting sick of seeing the same handful of characters in similar-looking dressing rooms and dank rock clubs. 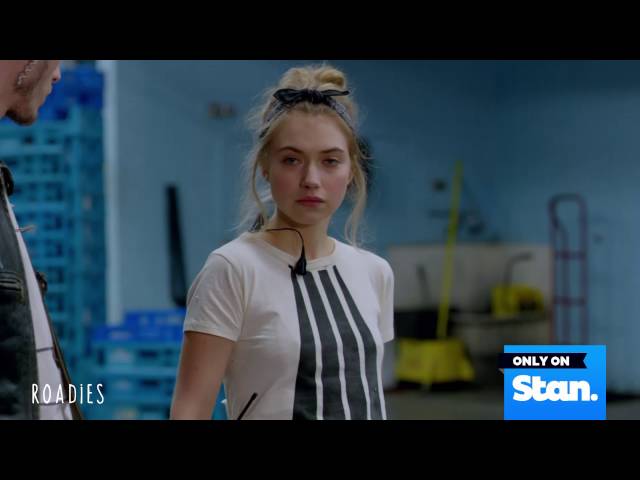 And real-life bands show up as well, right?
Oh, yes — music fans, get ready to start charting the name-dropping. One of the show’s running motifs is that the Staton-House Band has a different opening act at every tour stop, which means that each episode has what amounts to a musical guest: The Head and the Heart, Reignwolf, Lindsey Buckingham, and more. But given Crowe’s involvement — and his eclectic taste — the rock and roll references don’t begin and end with who’s performing. The soundtrack is filled with songs, a lot of which are played over the arena loudspeakers by the roadies themselves as they do their work. And when they’re not listening to their favourite bands, the characters are swapping stories about working for Lynyrd Skynyrd, listening to Bob Dylan’s radio show, or finding a rare Replacements bootleg. Even devout pop scholars may want to keep Wikipedia and All Music Guide open on their browsers while watching.

Does the pilot give a good indication of where the show might go?
Sort of. Though it takes place roughly over the course of 24 hours, the pilot episode — entitled “Life is a Carnival” — covers a lot of ground, introducing all the players and the particulars of their game. While getting the stage set for a Staton-House Band concert in New Orleans, Bill and Shelli deal with a deranged stalker, a budget crunch, an angry promoter, the imminent loss of several key personnel (including Kelly Ann), and their own middle-aged exhaustion. As the episode’s writer and director, Crowe takes pains to include all the tiny details of what happens in the wings in the hours before a rock show, while also establishing his series’ earnest, upbeat tone. How this will play out (or fill out) the next nine chapters is anyone’s guess, but you do immediately get a sense of the show’s almost vintage road-hog vibe from the get-go.

So this is unmistakably a Cameron Crowe project?
Roadies‘ creative team includes producers J.J. Abrams and Winnie Holzman (best-known for My So-Called Life and Huge), but from the moment the alternate “New York” version of Bob Dylan’s “Tangled Up in Blue” pops up, it’s clear that we’re in Crowe country. A lot about this series will appeal to Maguire and Famous fans — from the sense of camaraderie among co-workers to the emphasis on traditions and rituals as a way of bringing meaning to the daily routine. The various storylines also call back to classic Crowe themes, including the clash between artistic ideals and business interests, and the romantic attraction between men and women who seem to have little in common. (A P.S.A to those viewers who are allergic to the sort of signature “what I believe” speeches that occasionally show up in the writer-director’s work: Yes, those are here as well.)

And at a time when nearly every prestige drama on cable is about glowering, violent, depressed individuals, it’s refreshing to see a show where even when people are filled with self-doubt, they’re pretty cheery about it. In nothing else, this could be a pleasant weekly break from the cynicism that dominates so much of “serious” television. And if not, well … at least it rocks.